Researchers with the U.S. Fish and Wildlife Service hauled in a really big fish from the Detroit River last week.

Place your hands a couple of feet apart. Now spread them wider. Keep going, even wider. Stop when your wingspan reaches 7 feet.

Now that's how you take a fish photo! The Alpena Fish & Wildlife Conservation Office crew caught this 240lb, 6' 10" female lake sturgeon in the #DetroitRiver. She is likely 100+ years old! After processing, she was quickly released into the river. Photo by Jason Fischer/USFWS. pic.twitter.com/qNlBbdZaSV

A photo of the 6-foot-10-inch, 240-pound female sturgeon (which was released back into the water) was shared on social media and created a stir not just among the general public, but far-flung Fish and Wildlife staff, too.

“We’re all very excited and surprised. Seeing one this size is extraordinary,” said Jessica Collier, a fish biologist with the agency in Green Bay, Wisconsin. “She is rare, she’s a unicorn. I don’t think there’s many of them left that are that size.”

For comparison, a sturgeon caught off Montrose Harbor in April measured 40 inches and weighed 17.5 pounds.

There was a time when the Great Lakes were teeming with tens of thousands of such massive sturgeon, to say nothing of the millions of smaller juveniles and adults. Today, the largest remnant population of lake sturgeon is found in the St. Clair-Detroit River system (emptying into Lake Erie), numbering just 28,000. Lake Michigan’s remnant population represents a mere 1% of its historic level.

For a sturgeon biologist like Collier, the fact that the Great Lakes could support a sturgeon approaching what was once routine size is reason to hope. 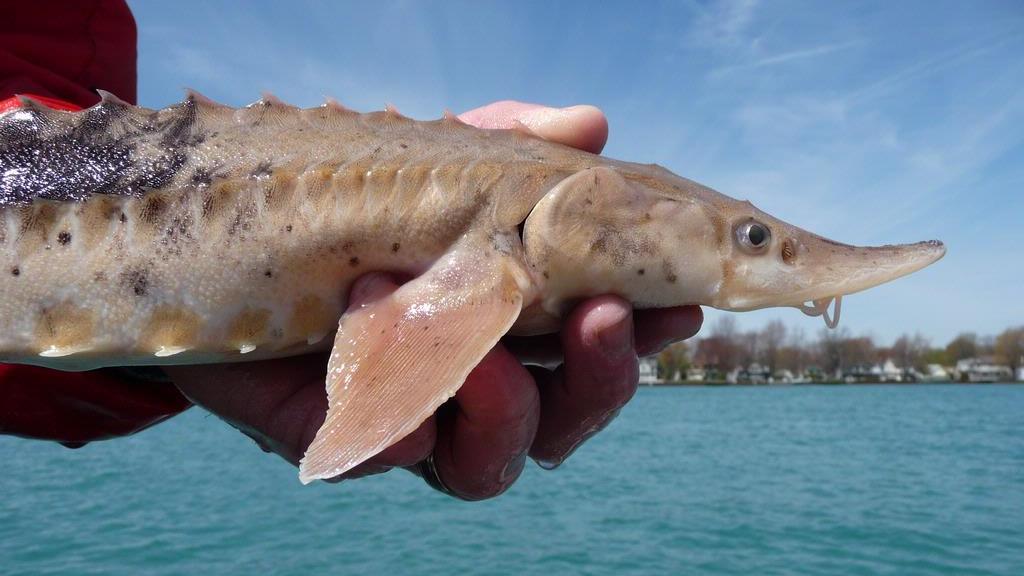 Sturgeon are ancient, dating back 150-200 million years, with bony plates like armor that distinguish them from other fish. Once thought of as a nuisance or “trash” fish — they destroyed fishing gear — lake sturgeon became prized for their eggs, which are used for caviar, and their swim bladders. The latter are a source of isinglass, a substance traditionally used to clarify wine and beer, Collier explained.

Today, the lake sturgeon is protected, listed as endangered, threatened or of special concern throughout its range. Putting a halt to the fishing of sturgeon was the first step in its recovery, Collier said, and efforts are now focused on undoing or working around some of the other ways humans have jeopardized the species’ survival.

Among the most devastating human activities was the construction of dams on Great Lakes rivers. Though sturgeon spend 90% to 95% of their life in lake waters, the fish migrate upriver to spawn, where they like to lay their eggs in rocky shoals. Dams cut off sturgeons’ access to their spawning grounds, which has contributed to the dramatic population loss.

Dam removal is one solution to the problem, but in cases where that’s not possible, some clever alternatives have been deployed. One is a “sturgeon elevator,” constructed on the Menominee River to help lift sturgeon upstream past a pair of dams. Another is the Mequon-Thiensville fishway on the Milwaukee River, a fishway being the aquatic equivalent of a highway bypass or detour, a way around a dam instead of over it, said Collier. 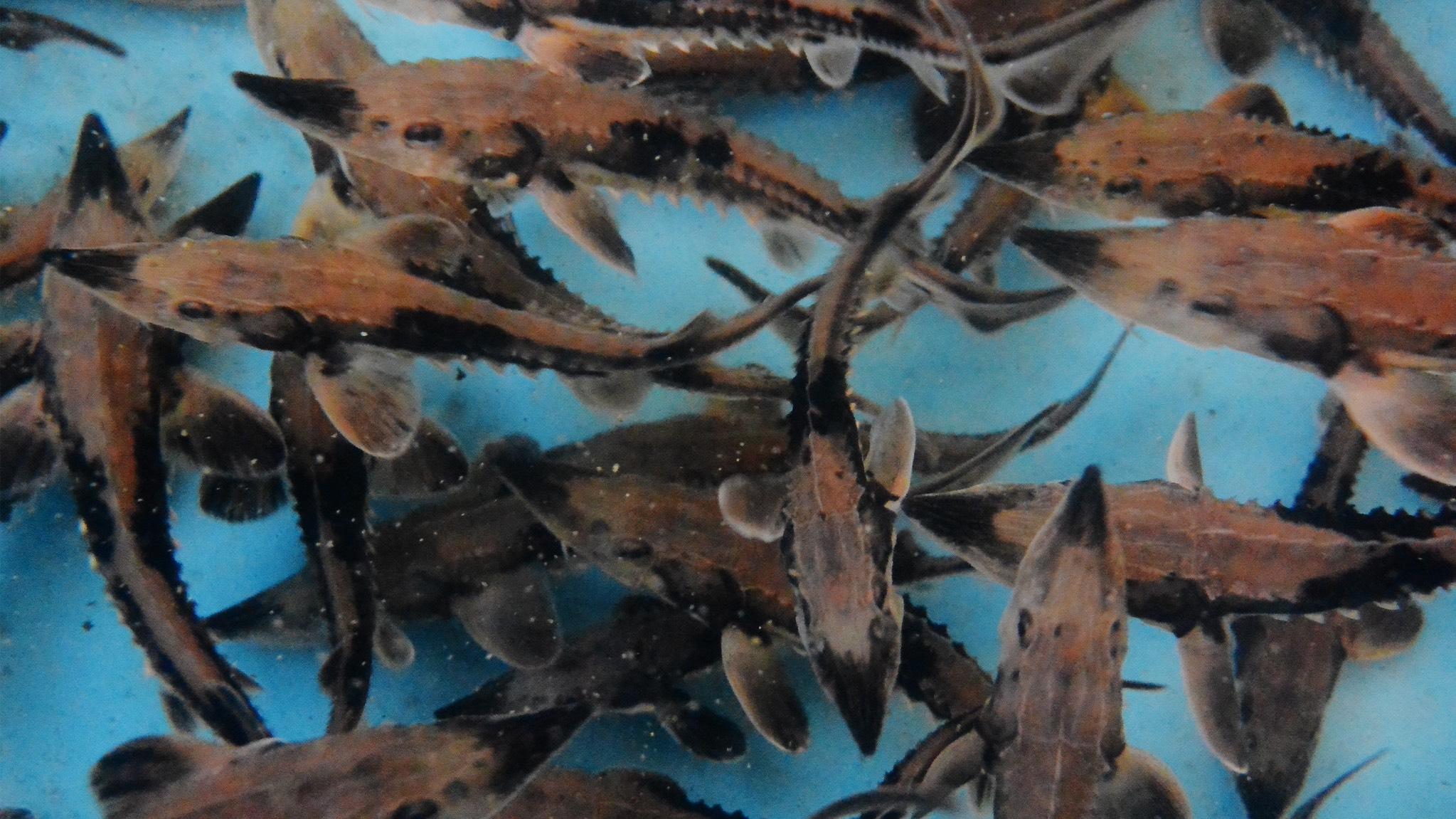 Agencies including Fish and Wildlife and the Department of Natural Resources from various states are also giving sturgeon a hand in the reproductive department. Portable hatcheries, called “streamside rearing facilities,” have sprung up at several locations within the Great Lakes region. The Milwaukee River is home to one and the Maumee River in Ohio hosts another.

In fact, the Fish and Wildlife team that reeled in the Detroit River whopper was out on a mission to collect sturgeon eggs and sperm for the Milwaukee River streamside program when their day got a whole lot more interesting.

Sturgeon are reared at these streamside facilities, in the river’s water, with the intent of the fish “imprinting” on the site upon release, and returning to spawn when they reach maturity.

“They home in on the river they’re born in,” Collier said. “We hatch and raise them in the river system we want them to return to.”

Because long-lived sturgeon take awhile to hit reproductive age — 18-25 years for a female, 12-15 years for males — streamside programs are just beginning to see their first fish (tagged for ID purposes) come back to spawn.

In choosing locations for these hatcheries, Collier said it’s important to make sure the habitat meets the sturgeons’ needs at various life stages: rocky areas for adults to lay their eggs as well as a “nursery” area downstream for the young sturgeon, who will spend their first year in the river before migrating to lake waters.

“We’re always checking the habitat first. Is the habitat there and is there enough of it? Because these are really big fish,” she said. “You need pretty big patches of habitat to support a lot of them migrating in to lay their eggs. Just one tiny little spot of rock isn’t going to be enough for them.” 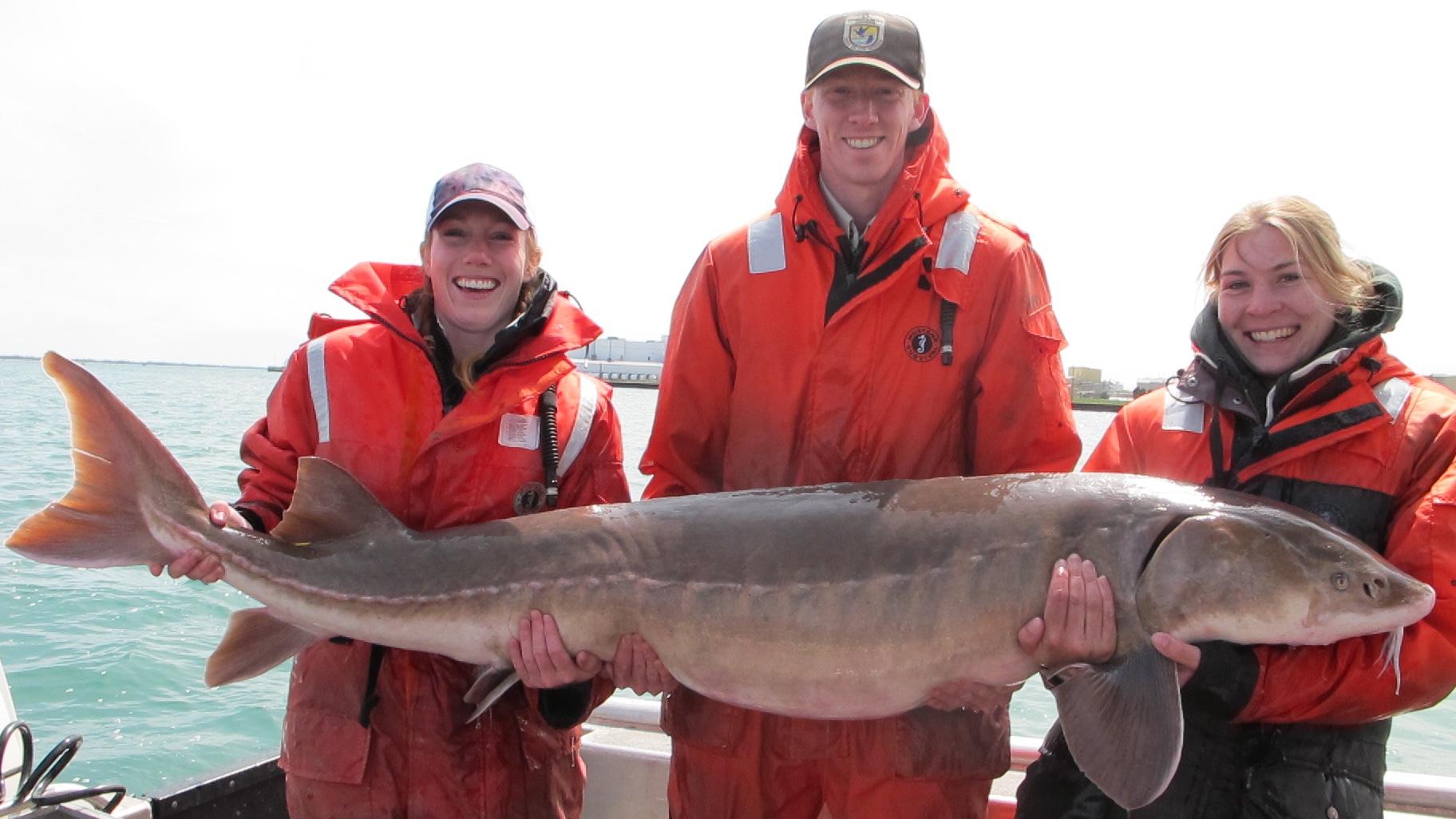 Massive sturgeon, like this one pulled from the Detroit River in 2014, could become the norm again if restoration efforts succeed. (Justin Chiotti / U.S. Fish & Wildlife Service)

Why go to the trouble of dam-side elevators and portable hatcheries for a fish?

For starters, sturgeon are in many ways the ambassadors of the Great Lakes, Collier said.

“They’re the biggest fish that we have, they’re the longest-lived fish that we have. People love them, they are beautiful, and they’re kind of majestic,” she said. “I think it’s something that people can feel this sense of connection to.”

Put another way, sturgeon are the kind of “charismatic species” that can grab the attention of people who aren’t typically tuned in to conservation or ecological issues, and get them to care about protecting and restoring the Great Lakes at large.

Big picture, it comes down to the health of the entire Great Lakes system and making it more resilient against, say, invasive species, Collier said.

She drew an analogy to the popular game, Jenga, in which blocks are removed from a tower until the stack collapses. A healthy sturgeon population is the equivalent of putting a piece back into the tower and making it more stable.

“Catching these large 100-year-old females that are close to 7 feet, we want that to be normal again,” she said. “We want to protect the populations and restore them so that maybe 50 years from now this is still news and still exciting, but it’s not the headline, it becomes the normal.”

The sturgeon pulled from the Detroit River was pegged as being 100-plus years old, impressive for sure but still a half-century behind the oldest sturgeon ever captured.

That begs the question: How do scientists know the age of a fish?

Turns out, fish have rings on their bones similar to the rings used to tell the age of a tree.

Scientists will either take a small clip of a fin ray — the skeletal structure of a fin — or, if the fish is deceased, look at its ear bones and count the rings.

“This is definitely not common knowledge,” Collier said.