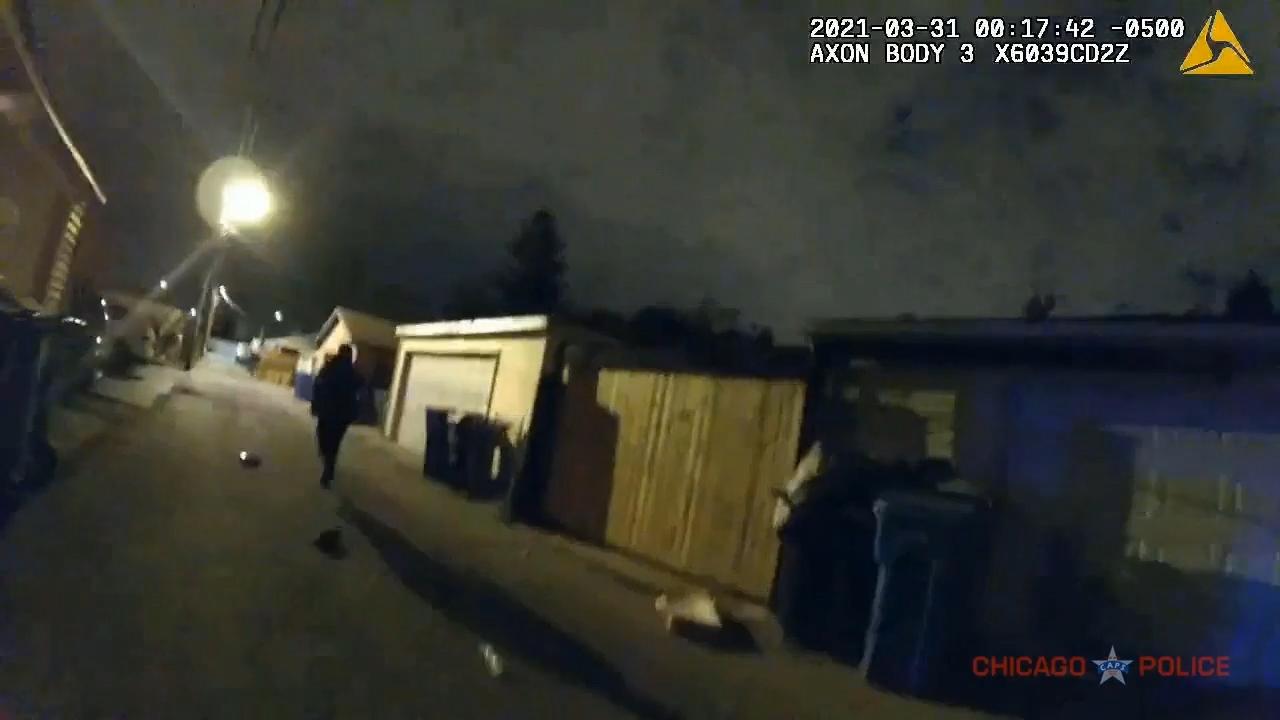 An image taken from a five-minute compilation video, released by the Chicago Police Department on April 28, which shows the March 31 police shooting of Anthony Alvarez in the Portage Park neighborhood. (WTTW News via CPD)

Chicago is again facing the stark reality of a fatal police shooting of a young person.

Videos released Wednesday by the Civilian Office of Police Accountability and the Chicago Police Department show the March 31 killing of 22-year-old Anthony Alvarez at the hands of a Chicago police officer.

Less than two weeks ago, COPA and CPD released videos showing the death of 13 year-old Adam Toledo. He too was shot by police, just two days before Alvarez was killed.

Media outlets handled videos of Toledo’s killing in different ways. Block Club Chicago published two versions of its story: one with video of the shooting and one without. WBEZ’s managing editor Tracy Brown told the Washington Post her organization decided not to publish the videos or use the audio on air, saying, “Those aren’t moments we want to normalize in our news coverage — or pageviews we’d be proud of.” Many local and national television outlets that did broadcast the police body camera video froze it the moment before Toledo was struck by gunfire, choosing not to show scenes of the shooting itself and the immediate aftermath in the Little Village alley where he died.

Every news organization must decide how to best handle such sensitive material as it reports a story and shares its findings. The examples cited above are valid ways to do that, and deciding what to show and how to show it are among the most difficult, critical decisions we make as journalists. We believe it’s important to explain the decisions we’ve made, and why.

We understand these videos can be traumatizing. We know that in some areas of the city, residents feel distrustful of law enforcement. Many people see themselves, or their family members or friends in the faces of Adam Toledo or Anthony Alvarez or Laquan McDonald or George Floyd. We have reported on the mental health aspects of dealing with such trauma, not only on “Chicago Tonight” but also on “Latino Voices” and “Black Voices” and on our website.

Still, we’ve taken a different approach to using these images.

On April 15, with full warning, we aired a lengthy portion of the police body camera video showing Toledo’s shooting, in real time, with unedited audio as well. We chose not to freeze the video before Toledo was shot because doing so, we feel, strips away some of the horror of the incident, though we did blur his face for a portion of the video in an effort to preserve his humanity. It’s not our intention to horrify viewers, but to show the reality of how Toledo died. Showing the moment that Toledo falls to the ground — and showing the reaction of the police officers in the immediate aftermath — gives our audience a fuller view of the story. We have not used these extended clips on air since April 15 and we don’t plan to.

The murder of a 14-year-old Chicago boy in Mississippi in 1955 was a seminal moment in American race relations and a catalyst for the civil rights movement. The story of Emmett Till became widely known because of his mother’s brave decision to hold an open-casket funeral and allow Jet magazine to publish photos of her son’s disfigured corpse. Those photos told a horrific story that no written description could.

It is with Till in mind that we aired extended clips of Toledo’s killing earlier this month. And it’s why we’ll air videos showing the fatal shooting of Alvarez, with warnings and time to give viewers a chance to close their eyes or change the channel. We will label the video itself with a warning for anyone tuning in late.

This is not about judging police actions. It’s not about judging victims. It’s about presenting as complete a picture as possible of what happened and the actions of police before and after those fatal events, and then, as always, letting our audience decide what to make of it all.