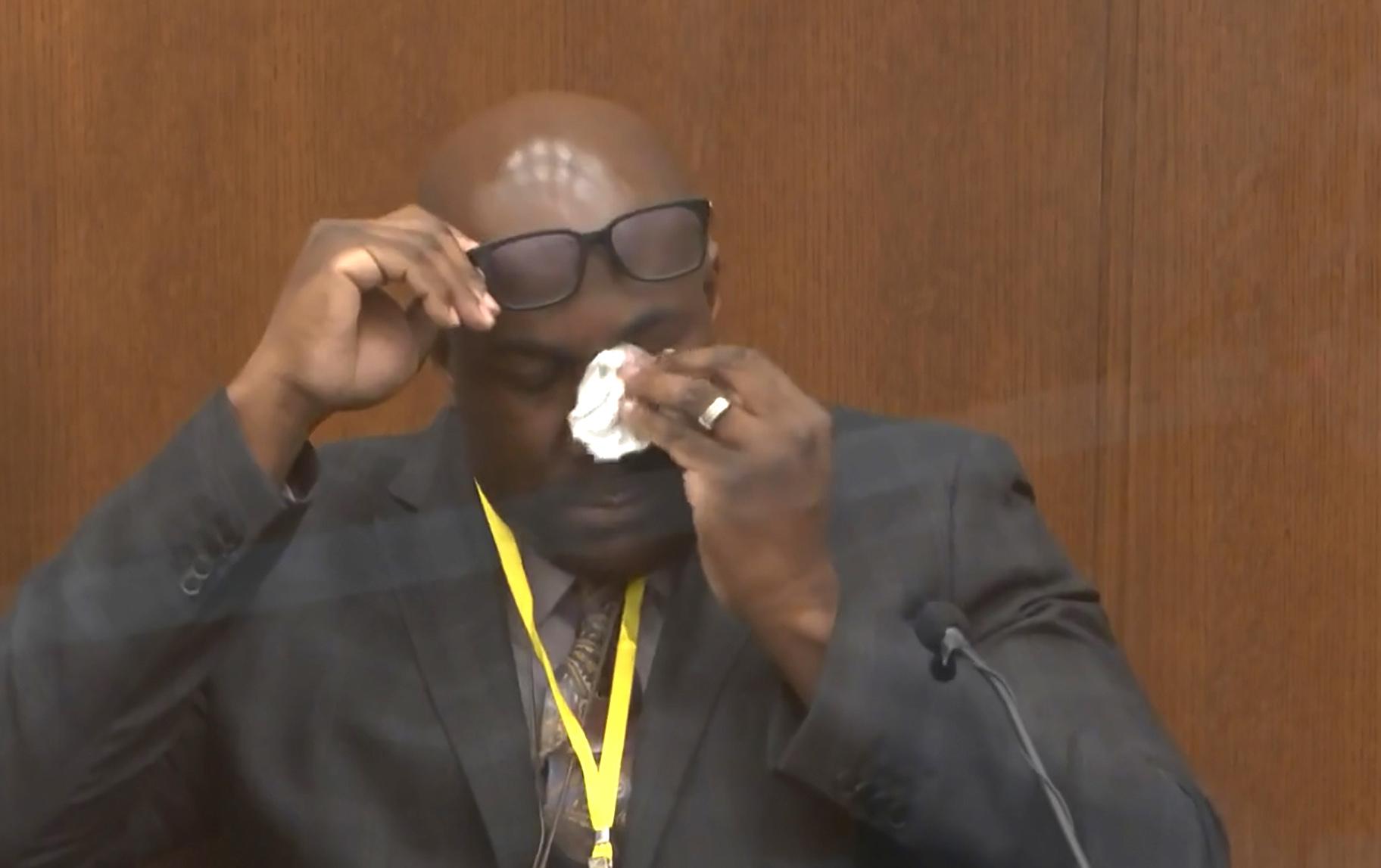 In this image from video, Philonise Floyd, brother of George Floyd, becomes emotional as he testifies as Hennepin County Judge Peter Cahill presides over court Monday, April 12, 2021, in the trial of former Minneapolis police Officer Derek Chauvin, in the May 25, 2020, death of George Floyd at the Hennepin County Courthouse in Minneapolis, Minn. (Court TV via AP, Pool)

MINNEAPOLIS (AP) — Prosecutors’ case against former Officer Derek Chauvin drew toward a close Monday with tender memories from George Floyd’s younger brother, along with another look at the harrowing video and testimony from a use-of-force expert who said no “reasonable” officer would have done what Chauvin did.

Seth Stoughton, a professor at the University of South Carolina School of Law, judged Chauvin’s actions against what a reasonable police officer in the same situation would have done, and repeatedly found that Chauvin did not meet the test.

“No reasonable officer would have believed that that was an appropriate, acceptable or reasonable use of force,” Stoughton said of the way Floyd was held facedown with a knee across his neck for up to 9 minutes, 29 seconds.

He said, too, that the failure to roll Floyd over and render aid “as his increasing medical distress became obvious” was unreasonable.

He said it was unreasonable as well to think that Floyd might harm officers or escape after he had been handcuffed to the ground. And in yet another blow to Chauvin’s defense, Stoughton said a reasonable officer would not have viewed the yelling bystanders as a threat.

The matter of what is reasonable carries great weight: Police officers are allowed certain latitude to use deadly force when someone puts the officer or other people in danger. But legal experts say a key question for the jury will be whether Chauvin’s actions were reasonable in those specific circumstances.

On cross-examination, Chauvin attorney Eric Nelson questioned Stoughton’s opinion that putting Floyd on his stomach in the first place was itself unreasonable and excessive.

“On this particular point, no,” the witness said.

Prosecutors are expected to rest their case on Tuesday, after which the defense will begin presenting its side. During 11 days of testimony, prosecution experts, including the Minneapolis police chief and medical professionals, said that the now-fired white officer violated his training and used excessive force and that Floyd died from a lack of oxygen because of the way his breathing was constricted.

Earlier in the day Monday, Philonise Floyd, 39, took the witness stand and lovingly recalled how his older brother used to make the best banana mayonnaise sandwiches, how George drilled him in catching a football, and the way George used to mark his height on the wall as a boy because he wanted to grow taller.

He shed tears as he was shown a picture of his late mother and a young George, saying, “I miss both of them.”

His testimony at Chauvin’s murder trial was part of an effort by prosecutors to humanize George Floyd in front of the jury and make the 46-year-old Black man more than a crime statistic. Minnesota is a rarity in allowing “spark of life” testimony during the trial stage.

Philonise Floyd described growing up in a poor area of Houston with George and their other siblings.

He said Floyd played football and deliberately threw the ball at different angles so Philonise would have to practice diving for it. “I always thought my brother couldn’t throw. But he never intended to throw the ball to me,” he said, smiling. 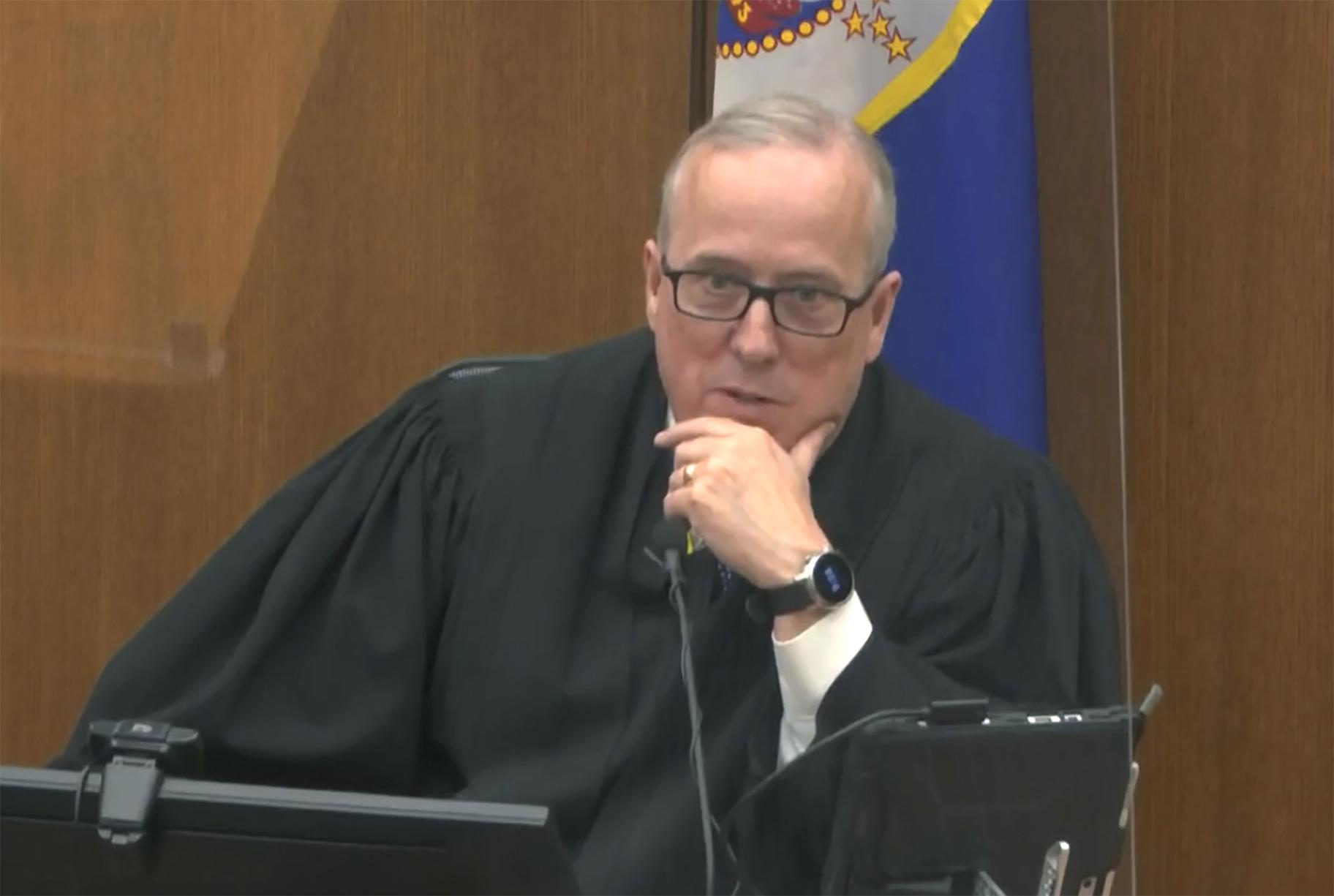 In this image from video, Hennepin County Judge Peter Cahill discusses motions before the court Monday, April 12, 2021, in the trial of former Minneapolis police Officer Derek Chauvin at the Hennepin County Courthouse in Minneapolis. (Court TV via AP, Pool)

Earlier Monday, Judge Peter Cahill rejected a defense request to immediately sequester the jury, the morning after the killing of a Black man during a traffic stop triggered unrest in a suburb just outside Minneapolis.

Chauvin’s attorney had argued that the jurors could be influenced by the prospect of what might happen as a result of their verdict.

But the judge said he will not sequester the jury until next Monday, when he expects closing arguments to begin. He also denied a defense request to question jurors about what they might have seen about Sunday’s police shooting of 20-year-old Daunte Wright in Brooklyn Center.

In the wake of the shooting, protesters broke into about 20 businesses, jumped on police cars and hurled rocks and other objects at officers in Brooklyn Center, about 10 miles from the heavily fortified Minneapolis courthouse.

The Brooklyn Center police chief later called the shooting accidental, saying the officer who fired apparently meant to draw a Taser, not a handgun.

Stoughton, the use-of-force expert, said the officers who subdued Floyd should have known he was not trying to attack them when he struggled and frantically said he was claustrophobic as they tried to put him in a squad car.

“I don’t see him presenting a threat of anything,” Stoughton said, adding that no reasonable officer would conclude otherwise.

Stoughton also pointed to instances when Chauvin should have been aware of Floyd’s growing distress: After one officer suggested rolling Floyd onto his side, Chauvin said no. The 19-year police veteran ignored bystanders who were shouting that Floyd was not responsive. And when another officer said Floyd didn’t have a pulse, Stoughton said, Chauvin’s response was “Huh.”

Mike Brandt, a local defense attorney closely watching the case, said Philonise Floyd’s testimony was irrelevant to whether Chauvin caused Floyd’s death, “but it certainly plays on the sympathy of the jury.” He said Stoughton’s testimony gave prosecutors an opportunity to leave the jury “with one more image of the video” of Floyd pleading for his life.

“It was the parting shot by the state,” Brandt said.

Earlier Monday, Dr. Jonathan Rich, a cardiology expert from Northwestern Memorial Hospital in Chicago, echoed previous witnesses in saying Floyd died of low oxygen levels from the way he was held down by police.

He rejected defense theories that Floyd died of a drug overdose or a heart condition. Floyd had fentanyl and methamphetamine in his system, high blood pressure and narrowing of the heart arteries, according to previous testimony.

“It was the truly the prone restraint and positional restraints that led to his asphyxiation,” Rich said.

In fact, the expert said, “Every indicator is that Mr. Floyd had actually an exceptionally strong heart.”

On cross-examination, Nelson tried to shift blame onto Floyd, asking if Floyd would have survived had he “simply gotten in the back seat of the squad car.”

Chauvin’s attorney  is expected to call his own medical experts to make the case that it was not the officer’s knee that killed Floyd. The defense has not said whether Chauvin will testify.