The 4-3 vote by the Chicago Board of Education to pay Chicago police officers to patrol high schools triggered a renewed call to end Mayor Lori Lightfoot’s control of Chicago Public Schools.

During the 2019 mayoral campaign, Lightfoot’s platform called for a fully elected board to replace the group appointed by the mayor, but she has yet to make good on that promise.

The vote last Wednesday “proves what we’ve known for more than two decades: mayoral control of our schools — under any administration — has been an unmitigated disaster,” according to a statement from the Chicago Teachers Union.

Ald. Matt Martin (47th Ward) noted that elected school boards in Denver, Portland, Minneapolis, St. Paul and Milwaukee have all ended their contracts with police. All are elected by voters.

“I am noticing a pattern,” Martin said. “Chicago needs an elected school board that’s accountable to our communities now.”

Lightfoot said Thursday there are “ongoing discussions” about what an elected school board would look like. However, local school councils should have the final say — not the Board of Education — over whether to allow officers to patrol their schools, Lightfoot said.

Elections for local school councils, which were to have taken place in April, were postponed because of the coronavirus pandemic, and have yet to be rescheduled. 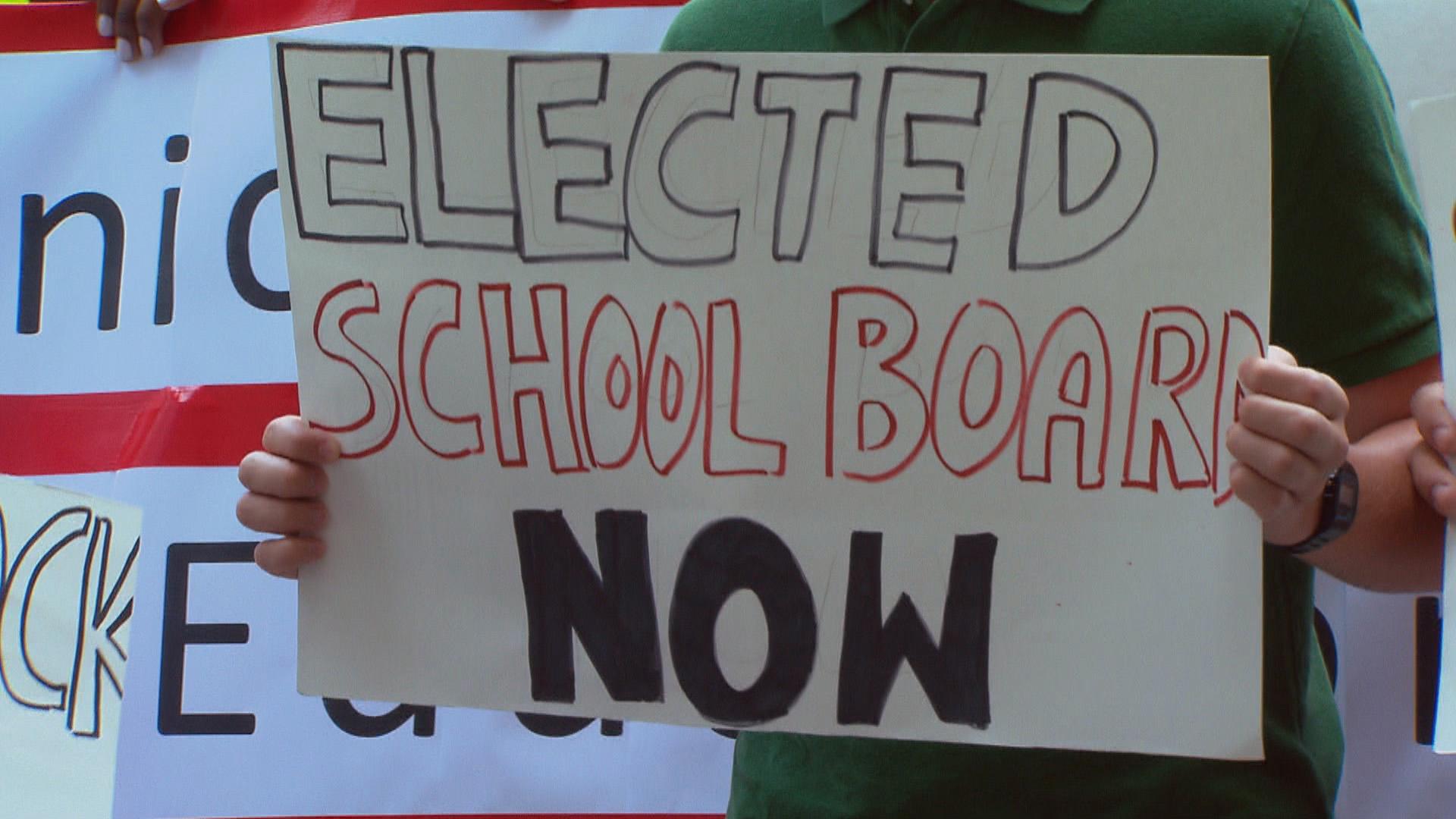 Supporters of an elected school board demonstrate in April 2019. (WTTW News)

Shortly after taking office a year ago, Lightfoot dismissed the seven board members appointed by former Mayor Rahm Emanuel and appointed a new slate, vowing to allow the board to operate independently until state lawmakers approved an elected board.

But since then, the push to create an elected school board led by the Chicago Teachers Union has languished, eclipsed by the coronavirus pandemic and stymied by Lightfoot’s opposition to the proposal to create a 21-member board.

The vote to keep police officers in Chicago’s schools was prompted by a growing push to reduce funding for the Chicago Police Department after protests sparked by the May 25 death of George Floyd at the hands of Minneapolis police.

A bill that would have ended mayoral control of Chicago’s schools failed three times in the past three years. The most recent version of the measure passed the Illinois House 110-2 on April 4, 2019, but never even got a committee hearing in the Illinois Senate after Lightfoot objected to the size of the board it would create: 20 members elected from geographic areas, plus one citywide member.

State Sen. Robert Martwick (D-Chicago), the lead sponsor of the elected school board bill, said there have been no recent discussions about the measure, which was not considered during the General Assembly’s abbreviated spring session.

Martwick vowed to press his colleagues to consider the measure during the General Assembly’s Veto Session, which is set to start in October.

Lightfoot has said she wants to ensure that local school council members had a path to serve on the board. It also not clear whether undocumented Chicagoans would be allowed to vote for board members as some lawmakers favor.

Chicago Public Schools has been under the control of the mayor since 1995, when state lawmakers responded to a massive financial meltdown by putting former Mayor Richard M. Daley in charge.

They are still waiting, more than a year into the Lightfoot era.

Note: This story was first published June 25, 2020. It has been updated with video.