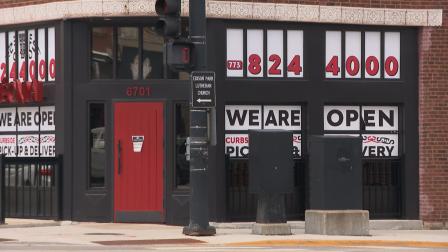 A business in Edison Park on Chicago’s Northwest Side tries to catch the attention of passersby during the pandemic. (WTTW News)

Chicago will move ahead into the next phase of reopening Wednesday, Mayor Lori Lightfoot announced. That transition that had been put into question following violent protests across the city in response to the police killing of George Floyd in Minneapolis.

Lightfoot on Tuesday said she made the decision only after speaking with business owners, chambers of commerce and city officials, all of whom she said were fully behind moving into phase three of the state’s Restore Illinois plan during the ongoing COVID-19 pandemic.

“Everywhere I went I asked a question: Should we open or should we delay?” the mayor said during a press conference Tuesday. “And to universal acclaim, emphatically, what I heard from people is ‘Mayor, we have to step forward. We have to open.’”

Under the new guidance, Chicago restaurants and coffee shops will be allowed to reopen to outdoor dine-in service, along with stores, barbershops and salons, child care centers and golf courses with strict limits on the number of people allowed indoors.

After meeting with small businesses and community leaders hardest hit, it’s more clear than ever that we must continue as planned the cautious reopening of our city tomorrow. pic.twitter.com/TzDsBn6gK9

The mayor had previously said the damage done to businesses that planned to reopen after being shut down since mid-March was a double blow to their owners and employees. And on Sunday, she said she was “absolutely worried” about another potential COVID-19 outbreak after thousands of protesters took to the streets in recent days.

Chicago Department of Public Health Commissioner Allison Arwady on Tuesday said the city is still meeting all the benchmarks necessary to move into phase three: new COVID-19 cases, hospitalizations, deaths and percent positivity are all on the decline.

But even so, she said this progress is “fragile at best,” adding that the biggest predictor of success isn’t any single metric, but rather the “individual decisions” people make each day to limit the possibility of spread.

“That is great news but it means that we are not done,” Arwady said. “Now more than ever, we need to be cautious.”

Chicago is still adding hundreds of new COVID-19 cases every day, she said, and will pass 50,000 total cases in the next couple of weeks. The city has also recorded 2,100 coronavirus-related deaths and more than 1,100 Chicagoans remain hospitalized.

Lightfoot said she’s coordinating with the Chicago Police Department to ensure the city can reopen safely on Wednesday. But she would not yet say whether the current curfew would remain in effect or if bridges would be lowered to restore access downtown.

Protests have continued for days across Chicago and other cities in response to Floyd’s killing. Businesses on the South, West and North sides of the city have been looted or damaged, compromising their ability to reopen as scheduled.

The city has worked with local chambers of commerce to determine how areas can reopen safely, according to Lightfoot, and identify partnerships to assist businesses with financial relief efforts and connect them with personal protective equipment.

Lightfoot said the city is developing its own relief fund to “supplement and support” small businesses from public and private resources, and will be pushing insurance companies to make claim payments to businesses affected by the riots immediately.

There will also be a continued police presence at grocery stores and pharmacies so they can restock and rebuild, the mayor said.

Businesses can contact 311 or their local chamber for assistance in boarding up doors and windows or cleaning up.

“We stand at the ready and you don’t have to wait,” Lightfoot said. “Reach out.”