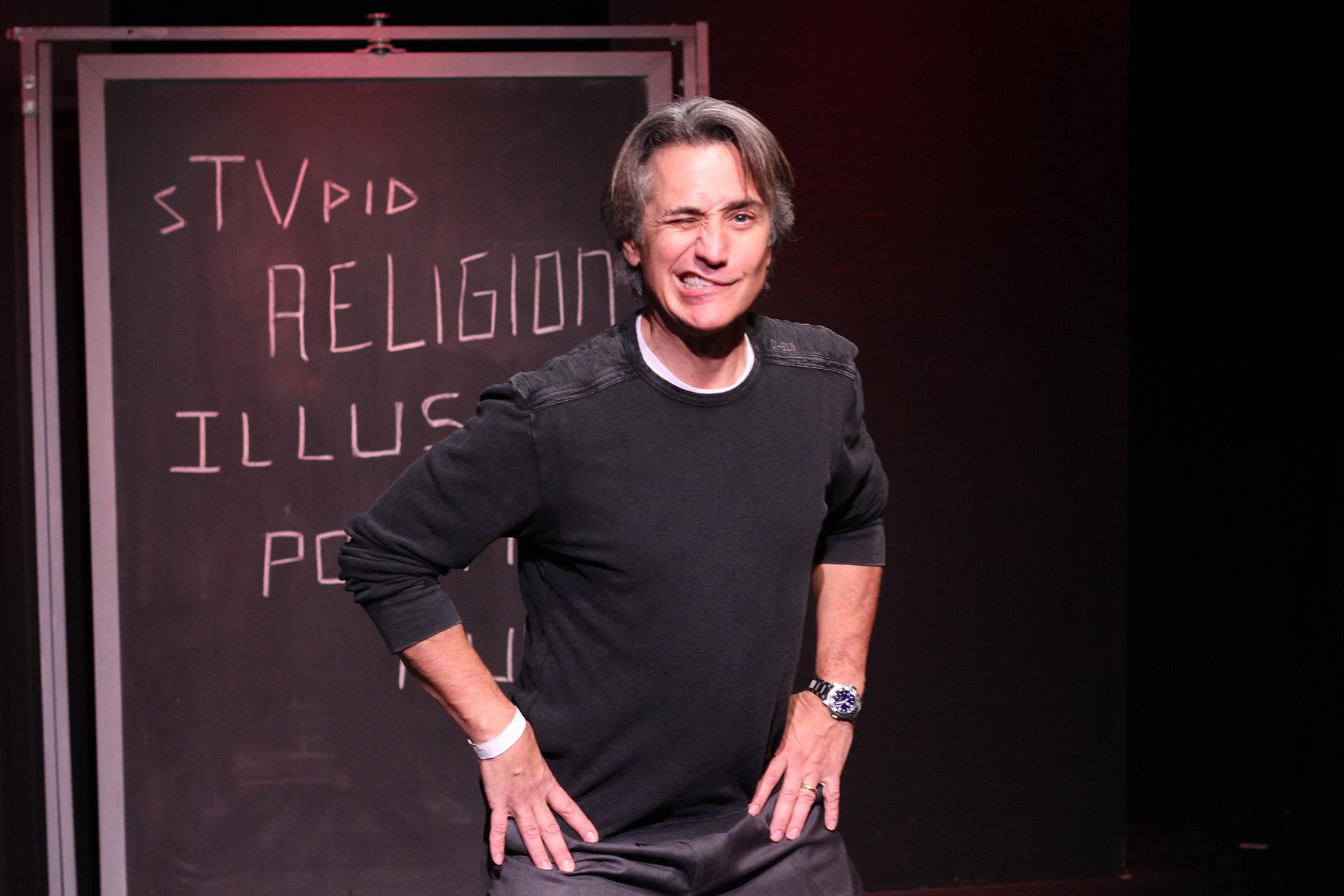 Robert Dubac in “The Book of Moron.” (Courtesy of Broadway in Chicago)

At the very same moment that seven Democratic presidential hopefuls energetically raked each other over the coals during Tuesday night’s television debate, Robert Dubac – an actor, writer, comedian and grand master of sleight-of-hand (and mind) – gleefully strode the stage of the Broadway Playhouse in his scintillating one-man show, “The Book of Moron.” And in 90 uninterrupted minutes of altogether irresistible satire he ingeniously nailed the current regrettable state of the nation and the world at large. Not since Robin Williams took magic carpet rides on his supersonic brainwaves, and George Orwell warned of the dangers of the corruption of language, has there been such whip-smart, razor-sharp entertainment and analysis. (Yes, Dubac is in very good company.)

Before reading any further however, be advised: If you think the plethora of adjectives delivered in the opening paragraph of this review smacks of overkill, it is intentional, as well as irrefutably deserved. For the monumental challenge engendered by Dubac’s show, which rails against the intellectual debasement of contemporary American life, is to incorporate as many four-syllable (or more) words as possible while simultaneously eliminating the use of the word “amazing.” This is especially true if in the process of describing the linguistic and semiotic “salad” that is the essential “plat du jour” in this ingeniously crafted, winningly mischievous, flawlessly delivered, playfully naughty, tone-perfect rumination on religion, race, sex, politics, the media and, above all, that elusive thing called truth. Warning: No canard is left unexposed. 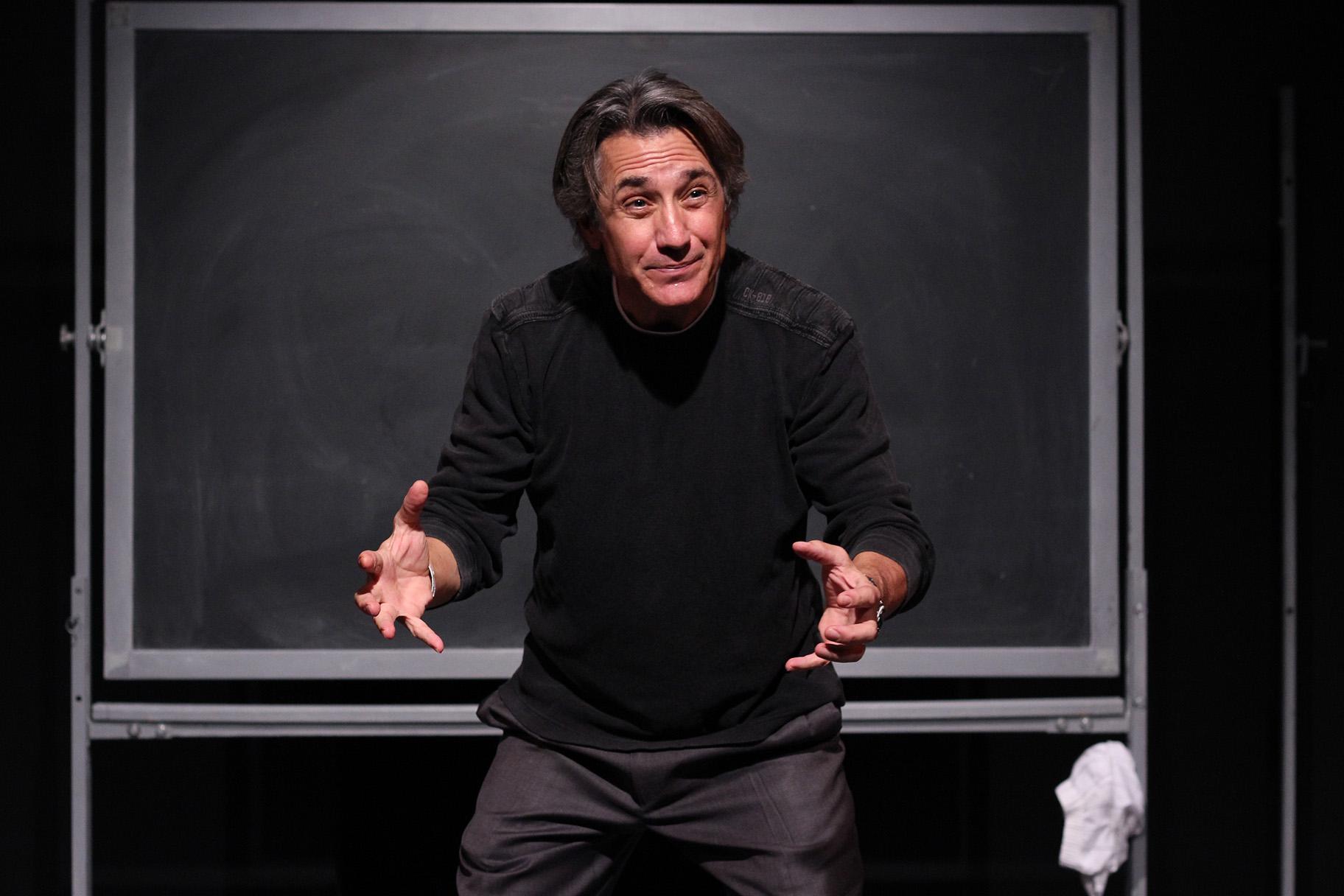 Robert Dubac in “The Book of Moron.” (Courtesy of Broadway in Chicago)

The premise of the show is that Dubac (a trim, fleet-footed man who signals his age by confessing he is of a generation still familiar with compact discs), is recovering from “transient global amnesia” (temporary memory loss) suffered when he fell on a patch of black ice on his way into a convenience store. The task at hand is for him to regain his intellectual and moral bearings in a society in which fake news, multifaceted hypocrisy, and a general dumbing down generated by everything from reality TV to social media has run rampant.

The title of the show (which bears the most fitting subtitle of “Funny has never been this smart”), is neither a typographical error, nor a jab at Restorationist Christianity (otherwise known as Mormonism) that inspired a hit Broadway musical.

Rather, with its airtight structure and whip-smart, wholly engaging delivery, it is designed to provoke thinking – probing the contradictions and distortions that bedevil us on every level these days. And Dubac even takes this to the most literal level as he challenges himself and his audience to think “inside and outside the box,” and he periodically jumps into and out of an actual one. (There also is the additional prop of a soap box, part of the show’s minimalist set that has little more than a tricked-out chalk board, a length of rope and standing microphone – both of which have erectile properties – and cigarette-like AirPods that Dubac refers to as his “bull.... detectors.”

Along the way, the actor populates the stage with reminders of his multiple alter egos: His Voice of Reason, His Common Sense, His Inner Moron, His Inner Child, His Inner Asshole and His Scruples. In addition, there is his dog, Wilson, who was left locked in his car in the wake of his accident.

I could go on, and on. But “Book of Moron” is meant to be performed, not described, and it can only get lost in translation. Go see it.