WASHINGTON (AP) — They owned the White House’s policy on Ukraine.

Or so they thought.

Gradually, administration officials on both sides of the Atlantic understood that President Donald Trump was using a back channel headed by Rudy Giuliani to push Ukraine for investigations of Democrats.

They’re the eighth and ninth witnesses to testify publicly before the House impeachment hearings against the 45th president.

What to watch after Thursday’s hearings open at 9 a.m. EST:

WHO IS FIONA HILL?

She wrote a book on Russian President Vladimir Putin.

Hill was, until July, Trump’s Russia analyst on the National Security Council. In her testimony before impeachment investigators last month, she delivered an impassioned warning that the United States’ faltering resistance to conspiracy theories and corruption represents a self-inflicted crisis and renders the country vulnerable to its enemies.

Look for whether she fills in blanks on Trump’s moves regarding Ukraine. Republicans have complained that Hill is one of several witnesses with no firsthand knowledge of the president’s actions, which Democrats say amount to impeachable bribery.

Hill testified that “every single day it seemed that he was on television, you know, basically spouting off, you know, one thing after another.”

The last thing she wanted to do, Hill said, is “to go home in the evening and try to look on the news to see what Giuliani was saying. And then I would have to go onto YouTube or whatever else I could find, you know, kind of replays of things because people were constantly saying to me: My God, have you seen what Giuliani is saying now?”

The British-born Hill was present at several key moments in the events at the center of the House’s impeachment drive.

Most notably, she confronted EU Ambassador Gordon Sondland, who was known for telling others that he was “in charge of Ukraine” despite being the U.S. envoy in Brussels.

“And I asked, well, on whose authority?” Hill testified in her closed-door deposition. “And he said, the President.”

Actually, Sondland said during his own testimony Wednesday, it wasn’t Trump who gave him the assignment. Rather, Bolton and acting White House chief of staff Mick Mulvaney signed off.

“So, by extension, yes, if the national security adviser and the chief of staff approve your remit, it really is coming from the president,” Sondland said.

Look for Hill, who described Bolton as “furious” over Sondland’s role, to respond.

NOT LITERALLY A ‘DRUG DEAL’

That July 10 confrontation with Sondland, Hill has testified, went like this:

A meeting at the White House with Ukrainian officials was cut short when Sondland said he had an agreement with acting chief of staff Mick Mulvaney that Ukraine’s president would get a meeting with Trump if Ukraine agreed to launch investigations.

According to Hill, Bolton “stiffened” and ended the meeting, later telling colleague Hill to report it to the National Security Council’s lawyer.

“I am not part of whatever drug deal Sondland and Mulvaney are cooking up on this,” Hill said Bolton told her.

As Hill navigated Sondland’s moves, she at one point referred to the shadow Ukraine policy as Trump’s “Gordon problem,” according to a colleague.

He is a political counselor at the U.S. Embassy in Kyiv who testified that he overheard Trump’s call with Sondland in which the president asked about “the investigations.” 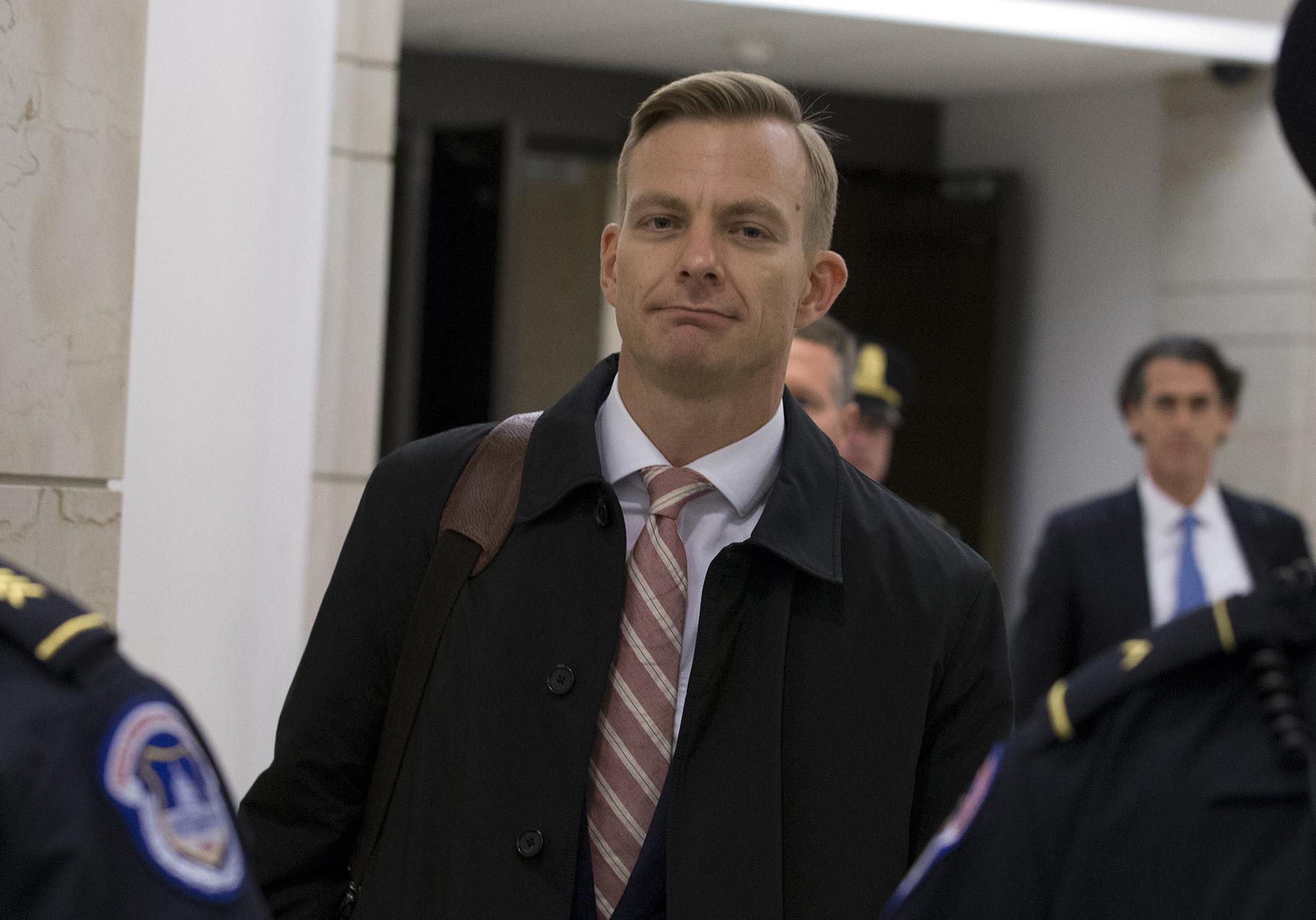 David Holmes, a career diplomat and the political counselor at the U.S. Embassy in Ukraine leaves the Capitol Hill, Friday, Nov. 15, 2019, in Washington, after a deposition before congressional lawmakers as part of the House impeachment inquiry into President Donald Trump. (AP Photo / Jose Luis Magana)

Sondland confirmed the July 26 call with Trump. The cellphone call came a day after Trump pushed the Ukranian president to investigate Democrats.

Holmes was dining with Sondland at a Kiyv restaurant when Sondland assured Trump that Ukraine would conduct the investigations he was seeking and would do anything he wanted. Sondland opened the call by telling Trump that his Ukranian counterpart “loves your ass.”

Look for whether Holmes adds to evidence that Trump was using a this-for-that technique to get what he wanted from Ukraine.