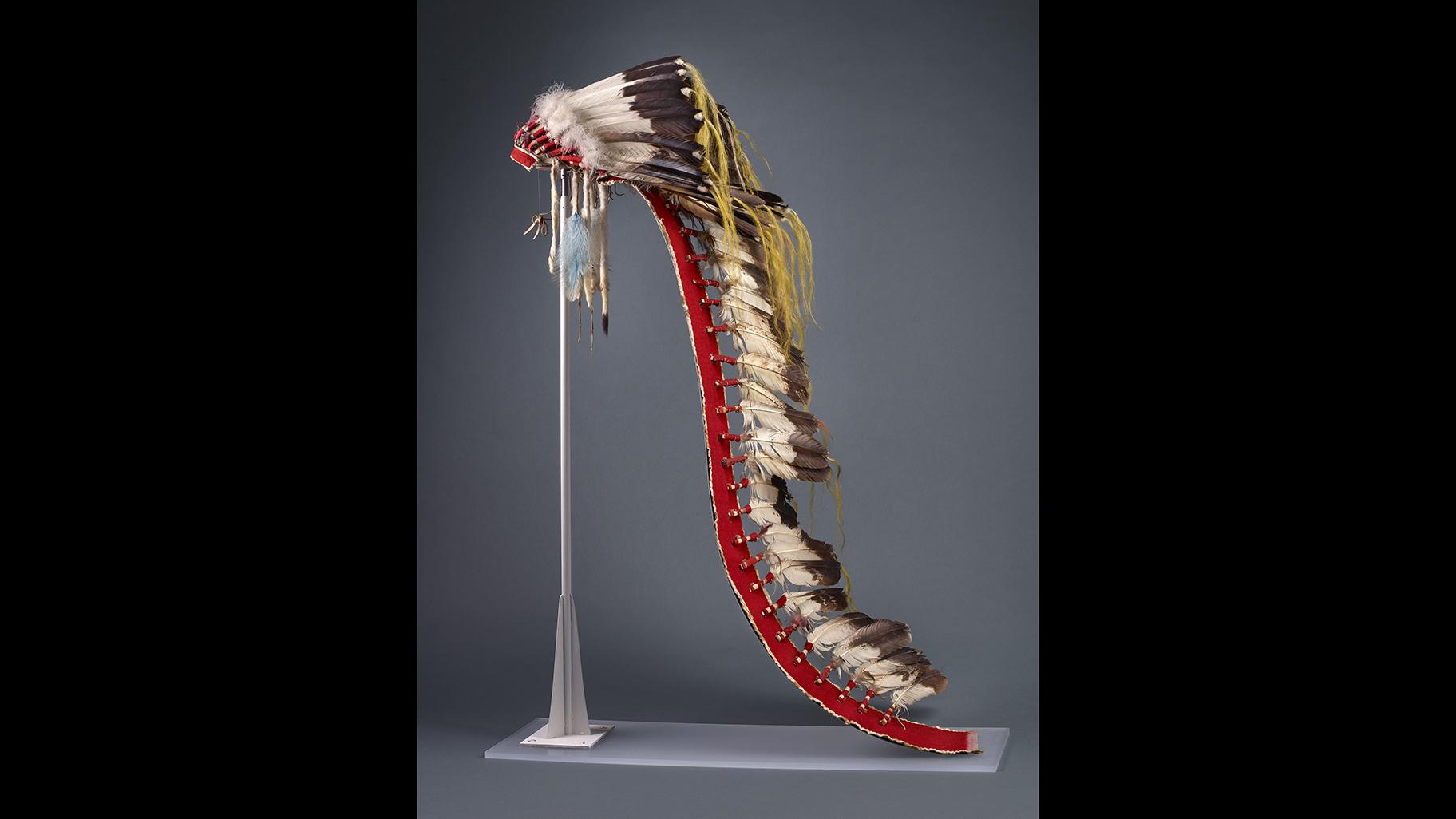 An Apsáalooke war bonnet with a long tail, indicating that it was worn by only chiefs or accomplished warriors. (John Weinstein / Field Museum)

In order to better represent the stories of Native American tribes and people, the Field Museum is in the midst of a three-year renovation of its Native North American Hall. But before that project is complete, the museum will showcase an American Indian community as part of an exhibition created in collaboration with nearly two dozen of the tribe’s members.

The first-of-its-kind exhibit will explore the history, values and beliefs of the Apsáalooke people, an indigenous group known for its horsemanship, artistic pursuits and matriarchal ways of life. “Apsáalooke Women and Warriors” will feature 21 never-before-displayed Apsáalooke war shields from the museum’s collections, along with war bonnets, horse regalia, high-end fashion designs and other historical and contemporary materials.

The project is led by Nina Sanders, an Apsáalooke (pronounced Ahp-SAH-luh-guh) scholar and member of the tribe. The Field says “Apsáalooke Women and Warriors” is the museum’s first large-scale exhibition curated by a Native American scholar in collaboration with the community that is being represented. 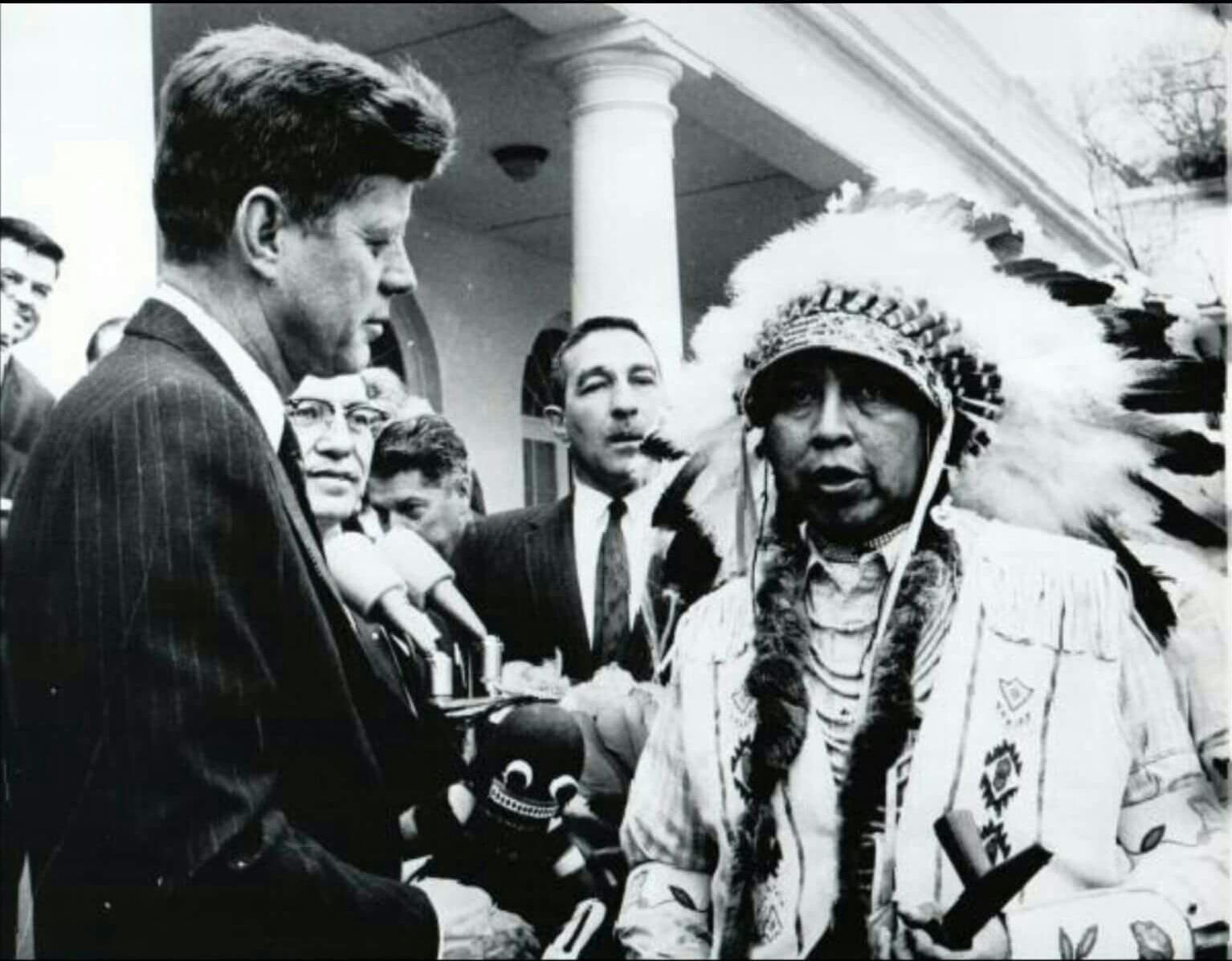 Edison Real Bird, a chairman of the Crow Tribe, meets with President John J. Kennedy during a 1962 event at the White House. (Courtesy Karis Jackson)

“We’re educating the world about a culture from our perspective,” Sanders said. “This is a celebration of our culture and our resilience and how the things we were making in the very beginning are still the things we are making today. We are still here. We are still practicing many of our traditional ways. We still speak our language. We’re very proud of who we are.”

Today, the Apsáalooke have about 14,000 enrolled members, less than half of whom live on the Crow Reservation in southern Montana, Sanders said. The Apsáalooke are also known as the Crow Tribe, the name ascribed to them by the U.S. government.

Janet Hong, project manager for exhibitions at the Field, said 20 Apsáalooke members contributed to the new exhibit, providing everything from scholarly research to contemporary art, including paintings, photography and beadwork. The contributing artists will be present when the exhibit opens in March.

“The Field Museum in the past has worked with Native Americans and artists to create exhibitions, but the difference here is the scale,” Hong said.

The publication – along with artwork and photographs created by Apsáalooke contributors – will be on sale at the exhibit, with all proceeds going toward the tribal college on the Crow Reservation.

Sanders said 14 staff members from the Field Museum and University of Chicago traveled to the reservation for her annual fair in August. They camped in teepees and participated in the three-day celebration, which included dancing, horse races and parades.

“[They] have been so incredibly flexible and open-minded,” Sanders said.

A key feature of the exhibit will be the collection of war shields, which the Apsáalooke likely started to create in the 1700s, Sanders said. Many of the shields that will be shown in the exhibit were obtained by a Field Museum researcher who traveled to the Crow Reservation in the early 1900s.

One of the shields was made by Chíischipaaliash, or Wraps His Tail, who led a rebellion against the U.S. government in the 1880s when it placed restrictions on intertribal warfare and free movement. The shield – made of buffalo hide, the head of a crane, feathers and natural earth clay pigments – portrays one of two legendary twin boys in Apsáalooke tradition who were associated with stars and battled against monsters, according to the Field. 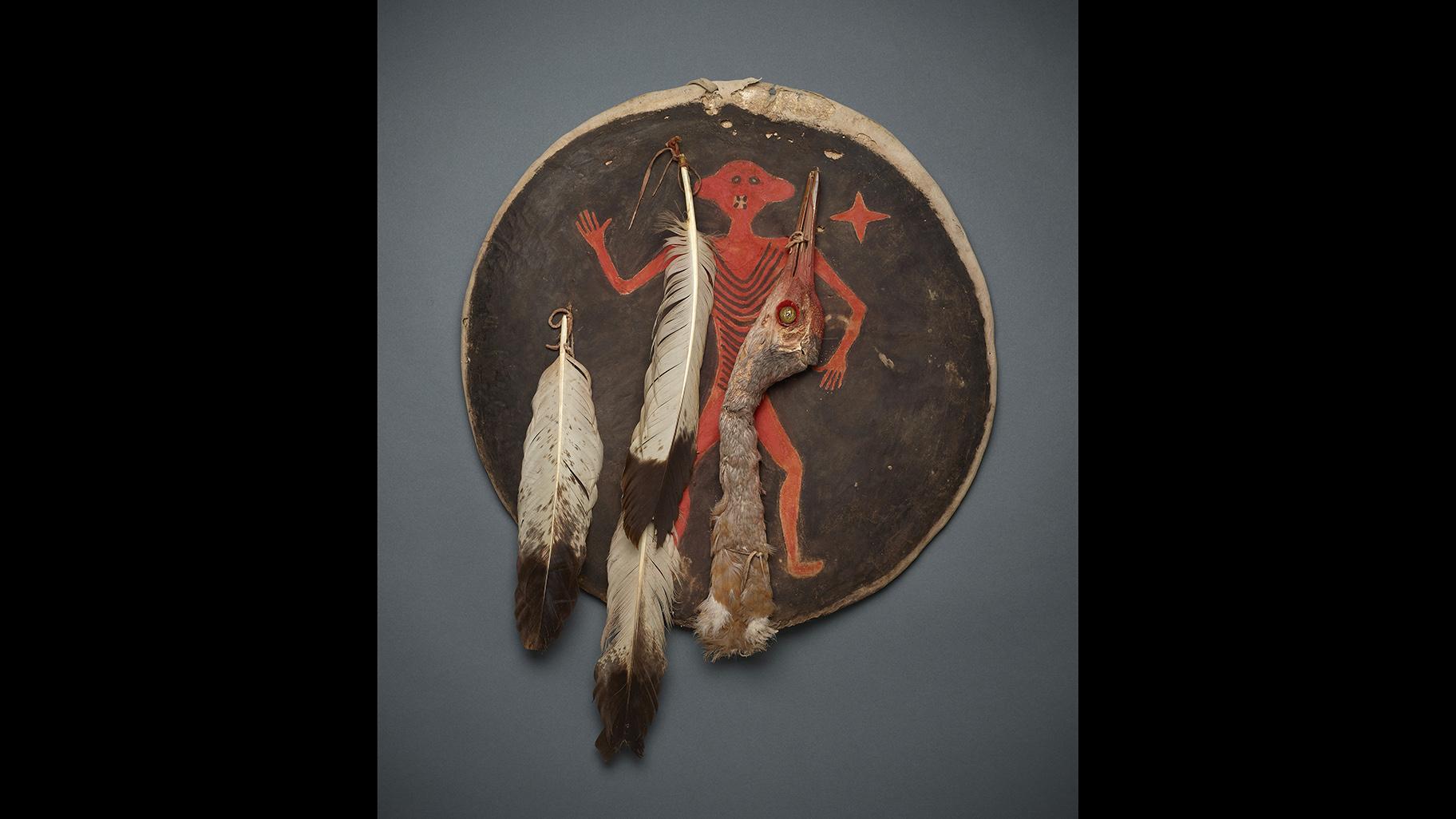 “[The shields] represent the supernatural force that protects the warrior and aids him in his endeavors,” Sanders said. “If he’s going out to fight someone in the evening and he’s not really sure where he’s going, he might have some owl feathers on his shield. He’ll have things on his shield that will assist him.

“The shields are actual physical manifestations of these men’s visions, their dreams,” Sanders said.

At the Field’s exhibit, visitors will be able to trace connections between the shields and their owners based on their craftsmanship and imagery.

Although these shields were traditionally owned by men, Apsáalooke war shields are cared for by women, who have the authority to tell the shields’ stories, clean them, store them and carry them in parades, Sanders said. 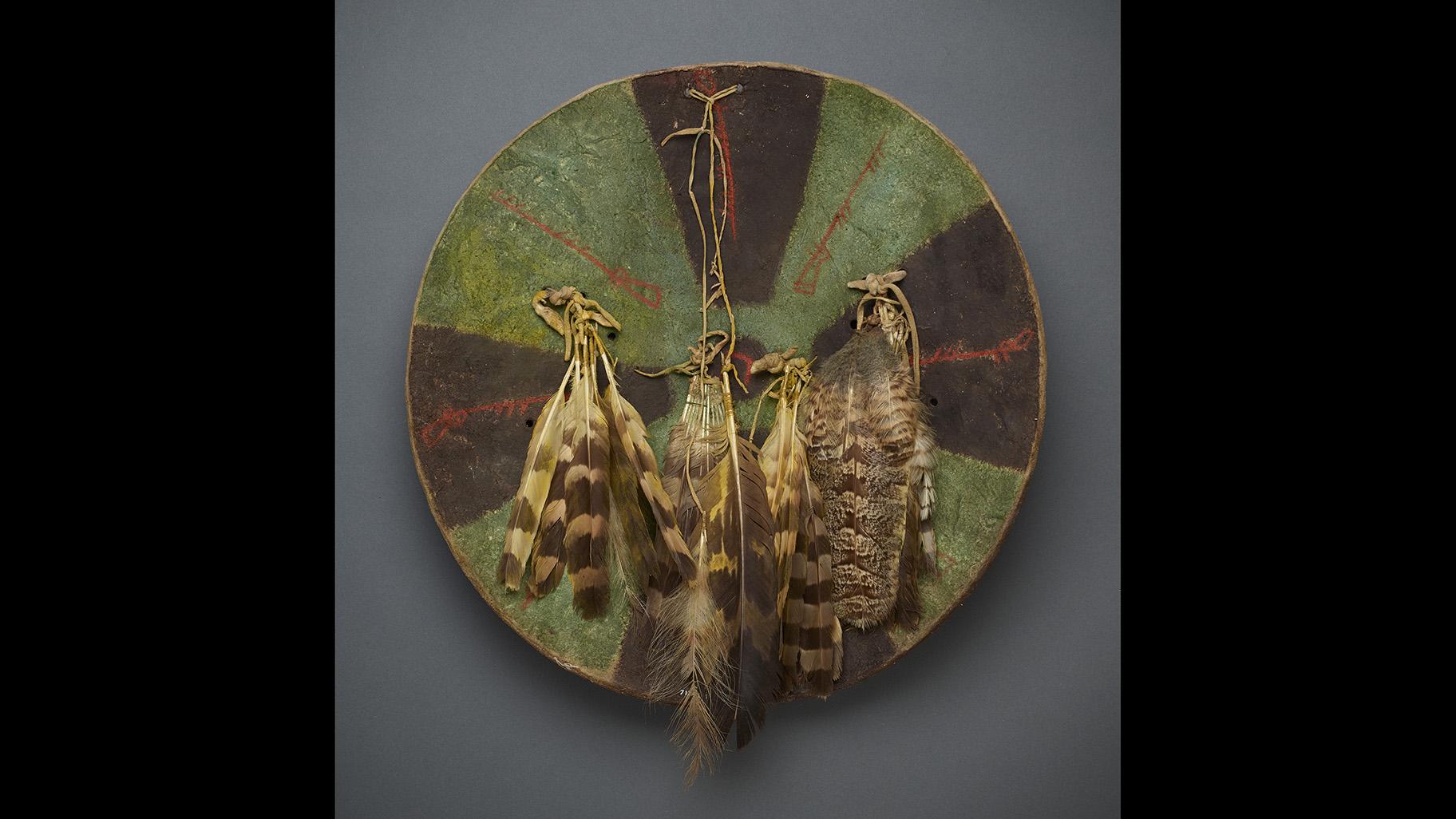 As evidenced in the war shields, Apsáalooke women are regarded as the keepers and influencers of the Apsáalooke way of life. Sanders said Apsáalooke women run the camps where her people live, deciding where to set up and how to live.

Apsáalooke men, meanwhile, are responsible for protecting the women so that they can carry on as life giver, culture keeper and foundation of the family and community.

“Everything he does is to protect her way of life,” Sanders said.

In addition to bia (woman) and bachee (man), the Apsáalooke recognize a third gender called batee, or two-spirited. 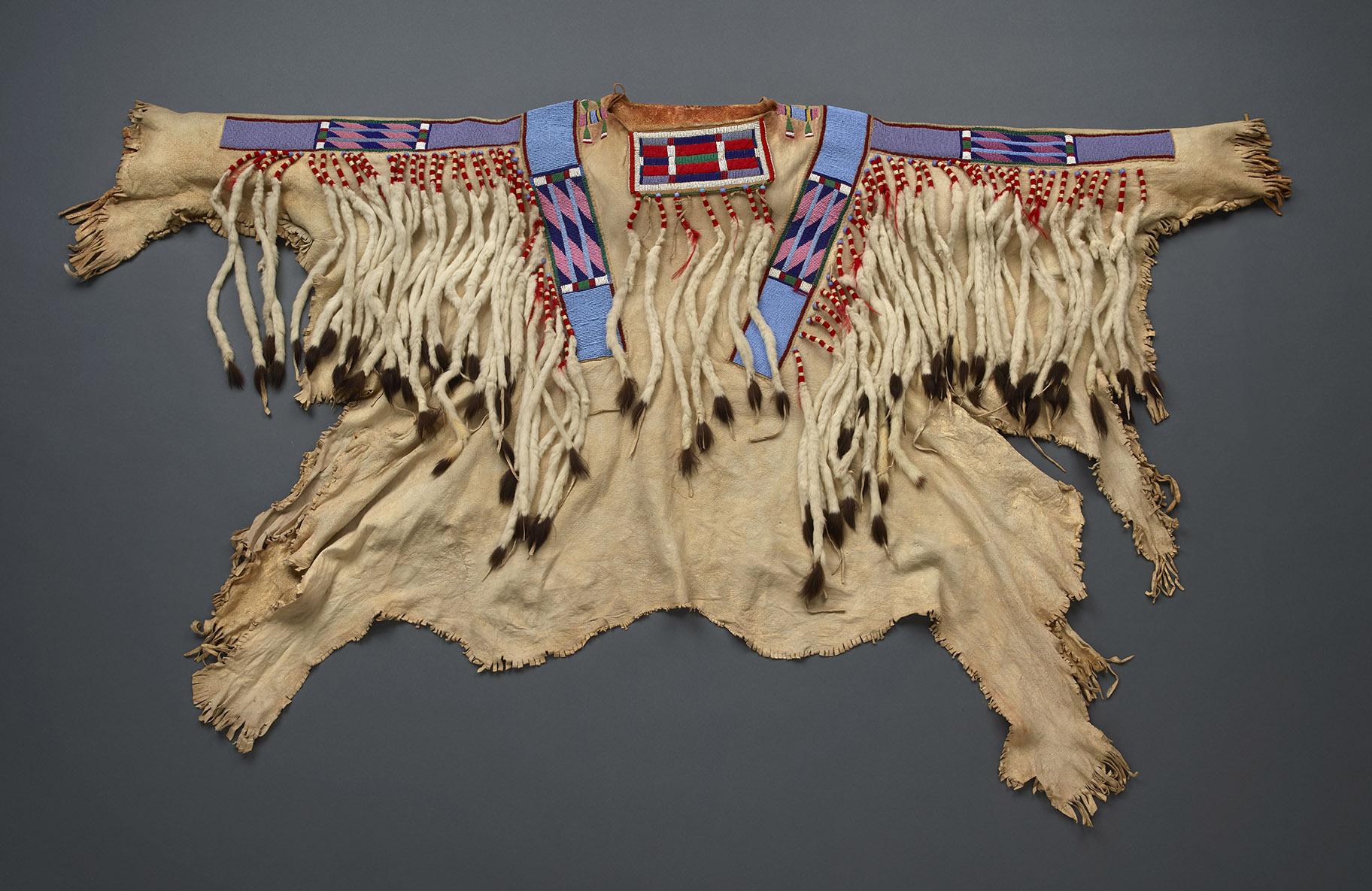 Sanders said the Field’s exhibit will allow the Apsáalooke to tell their own creation stories and share their culture in an authentic way.

“It’s incredibly powerful and healing,” Sanders said. “It’s difficult work to do as a native person, building that kind of trust. But I’m thankful to the Field Museum for endeavoring to do this work. It’s a huge step.”

“Apsáalooke Women and Warriors” is schedule to open March 13, 2020, and run through April 4, 2021. The exhibition will be presented in English and Spanish.