Video: We check in on this and more with “PBS NewsHour” political correspondent Lisa Desjardins.

WASHINGTON (AP) — Facing unusually wide criticism, President Donald Trump sent out strong but conflicting signals on the “endless war” in Syria and Middle East on Monday. He declared U.S. troops would step aside for an expected Turkish attack on Kurds who have fought alongside Americans for years but then threatened to destroy the Turks’ economy if they went too far.

Even Trump’s staunchest Republican allies expressed outrage at the prospect of abandoning Syrian Kurds who had fought the Islamic State group with U.S. troops. Trump’s decision appeared to be the latest example of an approach to foreign policy that critics condemn as impulsive, that is sometimes reversed and frequently is untethered to the advice of his national security aides.

“A catastrophic mistake,” said Rep. Liz Cheney of Wyoming, the No. 3 House Republican leader. “Shot in the arm to the bad guys,” said Sen. Lindsey Graham of South Carolina.

Pentagon and State Department officials held out the possibility of persuading Turkey to abandon its expected invasion.

In recent weeks, the U.S. and Turkey had reached an apparent accommodation of Turkish concerns about the presence of Kurdish fighters, seen in Turkey as a threat. American and Turkish soldiers had been conducting joint patrols in a zone along the border. As part of that work, barriers designed to defend the Kurds were dismantled amid assurances that Turkey would not invade.

Graham said Turkey’s NATO membership should be suspended if it attacks into northeastern Turkey, potentially annihilating Kurdish fighters who acted as a U.S. proxy army in a five-year fight to eliminate the Islamic State’s so-called caliphate. Graham, who had talked Trump out of a withdrawal from Syria last December, said letting Turkey invade would be a mistake of historic proportion.

U.S. involvement in Syria has been fraught with peril since it started in 2014 with the insertion of small numbers of special operations forces to recruit, train, arm and advise local fighters to combat the Islamic State. Trump entered the White House in 2017 intent on getting out of Syria, and even before the counter-IS military campaign reclaimed the last militant strongholds early this year, he declared victory and said troops would leave.

The strong pushback on Capitol Hill to the late Sunday night announcement prompted Trump to recast his decision but with renewed bombast, portraying it as a threat to strangle Turkey if it carries out its announced intent to invade.

“As I have stated strongly before, and just to reiterate, if Turkey does anything that I, in my great and unmatched wisdom, consider to be off limits, I will totally destroy and obliterate the Economy of Turkey,” he tweeted.

Officials suggested that Trump’s threats against Turkey on Monday morning were reactions to the overwhelming criticism of his earlier announcement that the U.S. would withdraw troops and get them out of the way of the Turkish forces. That announcement came after Trump spoke by phone with Turkish President Recep Tayyip Erdogan.

One official described a botched effort by the White House on Sunday night, putting out a statement that appeared aimed at making Trump look bold for ending a war. The official said attempts by the Pentagon and State Department to make the statement stronger in its opposition to Turkey’s military action were unsuccessful. But in what the official described as a “exercise in damage control” Monday morning, the Pentagon made it clear to the Turkish military that “there will be a major break in relations if you do this.”

The official added that Erdogan appeared to be reconsidering his earlier resolve because he was relatively quiet Monday. But the official cautioned that even if pressure from the U.S. and Europe succeeds in getting Erdogan to back down, the damage done to relations with the Kurds may be irreparable.

An official familiar with the Erdogan call said the Turkish president was “ranting” at Trump, saying the safe zone was not working and that Turkey couldn’t trust the U.S. military to do what was needed. And in reaction, Trump said the U.S. wanted no part of an invasion and would withdraw troops. 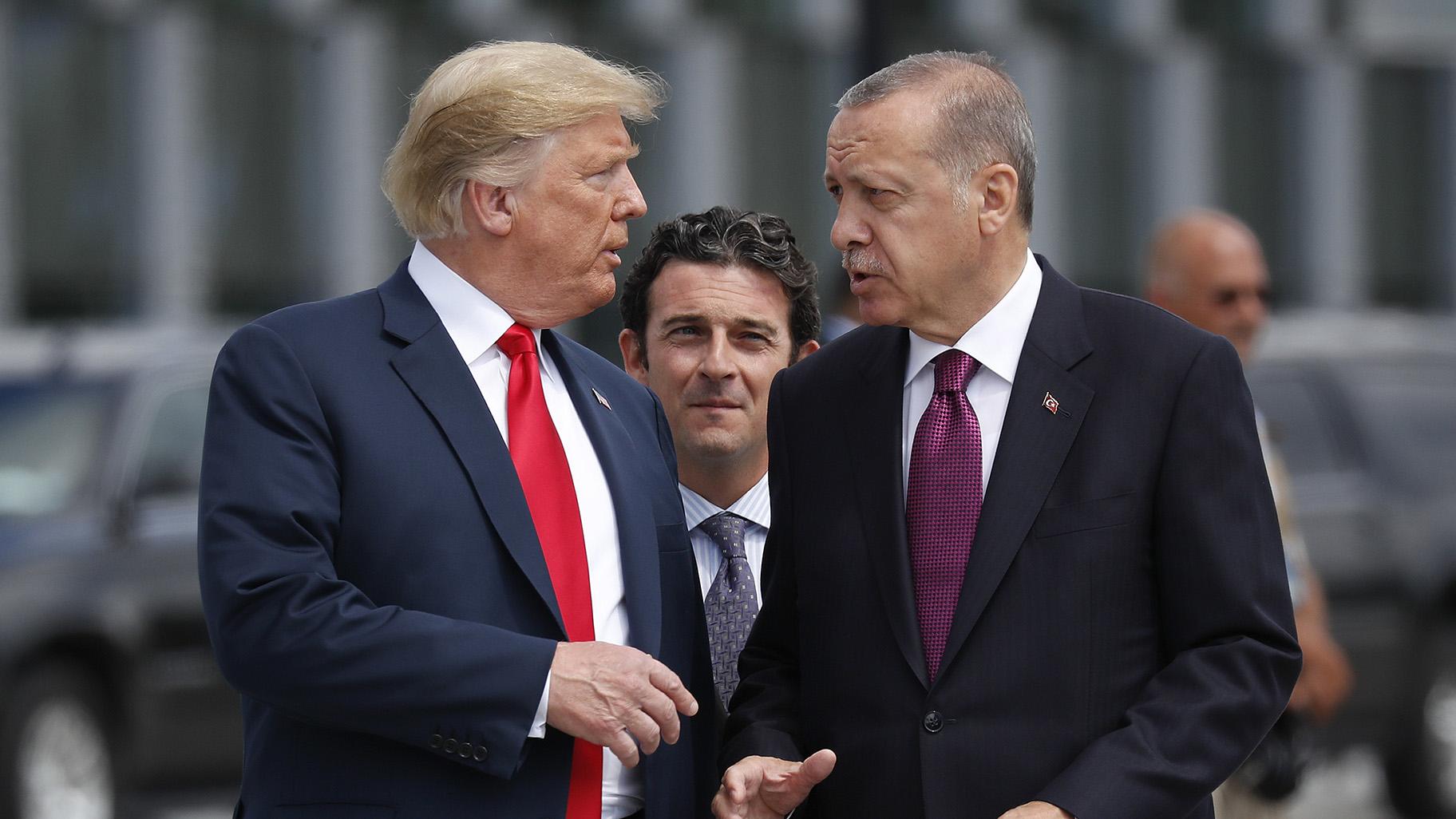 In this Wednesday, July 11, 2018, file photo, President Donald Trump, left, talks with Turkey's President Recep Tayyip Erdogan, as they arrive together for a family photo at a summit of heads of state and government at NATO headquarters in Brussels. (AP Photo / Pablo Martinez Monsivais, File)

The announcement threw the military situation in Syria into fresh chaos and injected deeper uncertainty into U.S. relations with European allies. A French official, speaking on condition of anonymity on a sensitive topic, said France wasn’t informed ahead of time. A Foreign Ministry statement warned Turkey to avoid any action that would harm the international coalition against the Islamic State and noted the Kurds had been essential allies, but entirely omitted any mention of the United States.

Trump defended his decision, acknowledging in tweets that “the Kurds fought with us” but adding that they “were paid massive amounts of money and equipment to do so.”

“I held off this fight for almost 3 years, but it is time for us to get out of these ridiculous Endless Wars, many of them tribal, and bring our soldiers home,” he wrote.

Hours after the White House announcement, two senior State Department officials minimized the effects of the U.S. action, telling reporters that Turkey may not go through with a large-scale invasion and the U.S. was still trying to discourage it. Both officials spoke only on condition of anonymity to discuss what led to the internal White House decision.

Among the first to leave were about 30 U.S. troops from two outposts who would be in the immediate area of a Turkish invasion. It’s unclear whether others among the roughly 1,000 U.S. forces in northeastern Syria would be moved, but officials said there is no plan for any to leave Syria entirely.

Bulent Aliriza, director of the Turkey Project at the Center for Strategic and International Studies, said that a U.S. withdrawal from Syria would be a major boost to Russia’s position there.

He added that other allies in the region, including the Kurds, will “look at this withdrawal as U.S. unwillingness to stand up for its rights and maintain its alliances in the region.”

Trump’s move came at a pivotal moment of his presidency. House Democrats are marching forward with their impeachment inquiry into whether he compromised national security or abused his office by seeking negative information on former Vice President Joe Biden, a political rival, from foreign countries.

As he faces the impeachment inquiry, Trump has appeared more focused on making good on his political pledges, even at the risk of sending a troubling signal to American allies abroad.

House Minority Leader Kevin McCarthy, R-Calif., said early Monday on “Fox & Friends” that he had not been briefed by the president about the decision and he had concerns.

“I want to make sure we keep our word for those who fight with us and help us,” he said, adding that, “If you make a commitment and somebody is fighting with you, America should keep their word.”

Nikki Haley, who served as U.S. ambassador to the United Nations, said the U.S. “must always have the backs of our allies, if we expect them to have our back. ... Leaving them to die is a big mistake.”

Turkey considers the People’s Protection Units, or YPG, an extension of the Kurdistan Workers’ Party, or PKK, which has waged an insurgency against Turkey for 35 years.