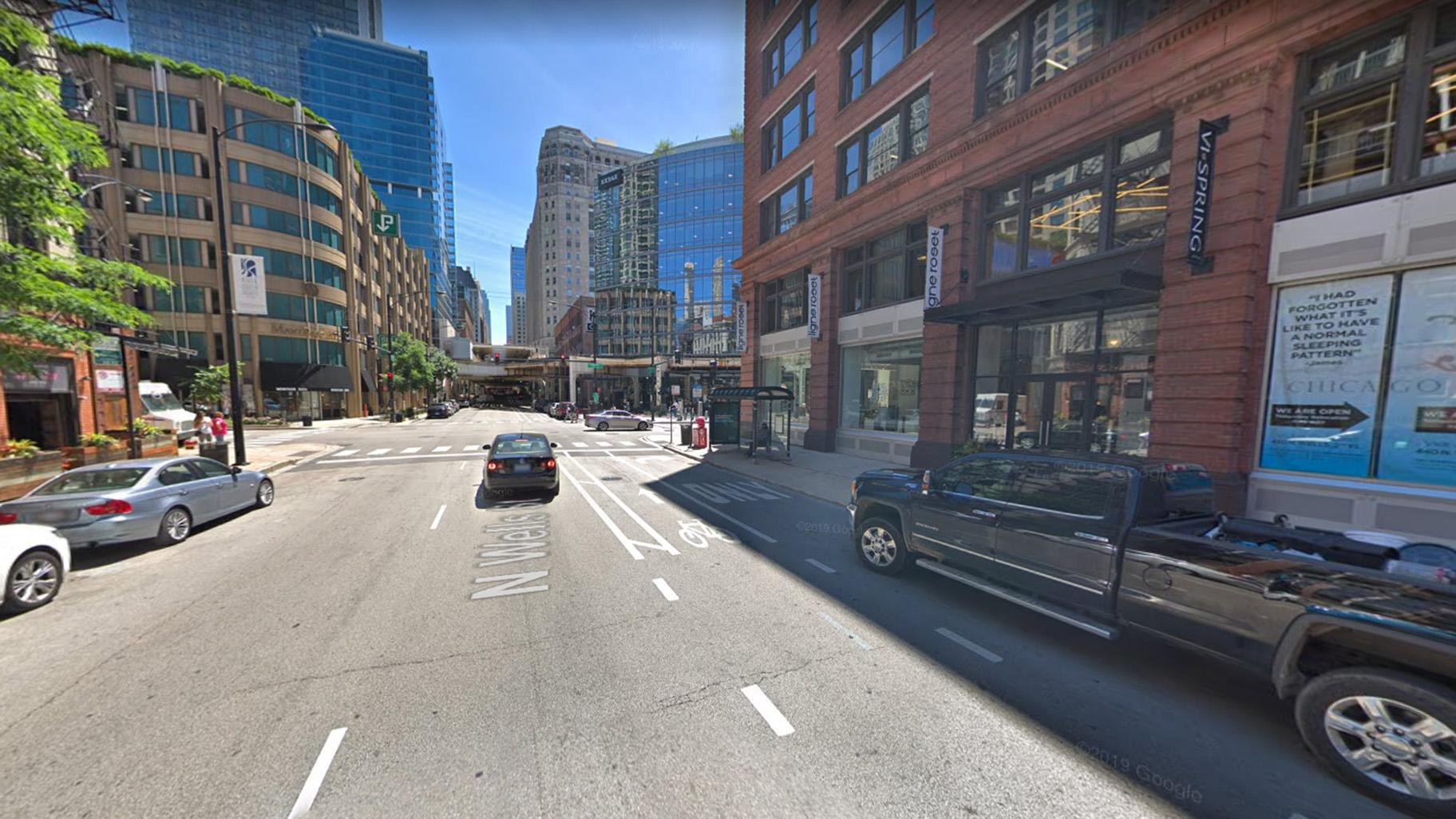 A view of Wells Street looking south to the intersection of Hubbard Street in River North, where police say a cyclist and CTA bus collided on June 6, 2019. (Google Maps)

A Chicago Transit Authority bus driver who racked up more than a dozen traffic tickets before working at the agency is out of a job and facing a lawsuit, along with his former employer, following a nonfatal June crash that sent a Chicago cyclist to the hospital.

According to a crash report filed by Chicago police, Joseph Morgan was struck by a CTA bus while cycling along Wells Street in River North just after 8:30 a.m. June 6. According to the report, the bus and cyclist were both traveling southbound near the intersection of Wells and Hubbard streets. The bus was pulling up to a bus stop and Morgan was riding in the bike lane, the report states.

Police say Morgan, who was 24 years old at the time, was transported to Northwestern Memorial Hospital with injuries to his arms, legs and torso. His bicycle was significantly damaged, according to the report.

The CTA fired the driver of the bus, Sunday Ajayi, on July 9, according to agency documents obtained by WTTW News. In that separation notice, the agency cites Ajayi for failing to obey rules regarding safely operating vehicles, defensive driving, passing and being passed, and mirror use, among other violations.

Ajayi, 53, of south suburban Richton Park, started working for the CTA in 2000 and made $151,789 in 2018, according to a Regional Transportation Authority database. Court records show that between 1989 and 1999, he received 17 traffic tickets; he got an additional ticket in 2005, after he was hired by the CTA. Those tickets cite speeding as much as 25 miles per hour over the limit, unsafe driving, driving an uninsured vehicle and improper child restraints, among other infractions. While many of the tickets were dismissed or not prosecuted, records show Ajayi paid at least $475 to cover seven of them.

In a statement, CTA Media Relations said the agency “places the highest priority on safety and provides extensive training to our operators, and we take every traffic violation seriously.

“Before bus operators are hired, they are required to produce a certified copy of their driving history from the Illinois Secretary of State’s (SoS) Office,” the statement continues. “The SoS provides the CTA regular updates on any change in status of any driving license, as those licenses are handled by that agency.”

According to the lawsuit, Morgan, now 25, says he suffered injuries leading to disability and disfigurement, significant medical bills and lost wages, and says the crash caused pain and suffering, emotional distress and loss of normal life. The CTA denied a Freedom of Information Act request from WTTW News for video of the incident from bus cameras, saying it would infringe on the privacy of the cyclist. However, Morgan’s attorney Joseph Balesteri says the CTA allowed him to screen the video at the CTA Law Department office.

“The impact is the bus driver running over Joe and striking him with the bus in the center of the front of the bus,” said Balesteri, a partner in the firm Power Rogers & Smith. He says Morgan has significant orthopedic and gastrointestinal injuries as a result of the crash, necessitating a rerouted colon, and also faced blood loss and extensive road rash. Morgan is staying with family in Michigan while he recovers and has not worked since the crash, according to Balesteri.

The CTA conducted its own investigation of the June incident. In Ajayi’s statement, he claims a second cyclist sped past Morgan and pushed him, causing him to fall. A supervisor’s report detailing the incident mentions a single witness account of two cyclists colliding and one hitting the bus, but the same supervisor’s account of the crash makes no mention of a second cyclist, instead saying Morgan rode along the right side of the bus and “misjudged his clearance,” making contact with the side of the bus.

In a response to the suit, the CTA admitted Morgan was “struck and run over” by a bus and admitted “negligence in the operation of its vehicle,” but denied Morgan’s injuries and asked the court to dismiss the complaint.

When asked what records the CTA keeps regarding bus-related collisions and how many involve cyclists, CTA Media Relations said, in part: “Out of 12 million bus trips in 2015 and 2016, there were 20 incidents involving bicyclists. We continue to work toward ways to improve training and performance of all operators—and build on what’s already a strong safety record.”

The crash was Ajayi’s third on the job since January 2018, according to CTA documents. While the agency classified the other two as “not involving serious damage and/or serious injury,” Ajayi and the CTA are facing a lawsuit in at least one of those cases. On Jan. 17, 2018, Ajayi rear-ended a car while driving a bus along King Drive near 95th Street, according to a lawsuit filed by Robert Crocker, the driver of the car.

In a response to the Crocker’s suit, the CTA admitted its driver caused the crash, that he “carelessly and negligently failed to keep a proper lookout” and slow down to avoid the crash. It also denied Crocker’s injuries and asked for his suit to be dismissed as well.

Attempts to contact Ajayi were unsuccessful. Hearings in both the suits are scheduled later this month.