After two years of construction, a highly anticipated change to Chicago’s Lakefront Trail – all 18 miles of it – is now a reality: separate paths for cyclists and pedestrians. And with warm weather bringing more people to the area – including photo-snapping tourists (some of them on wheels) – the new layout may take some getting used to.

Poll: Do you plan to use the Lakefront Trail this summer?

The Lakefront Trail sees an estimated 100,000 users a day on peak summer weekends, and for years, congestion and the risk of collision has been a big concern. With funding from billionaire Ken Griffin, the city was finally able to create separate biking and walking paths, but realigning an existing trail presented a challenge.

“You think that you have a ton of space to work with, but in each section of the lake it’s a little bit different,” said Heather Gleason, the Chicago Park District’s director of planning and development. “(In some places) we actually have a pretty wide swath of land to work with to be able to get two trails in, but not every piece of the lakefront is like that. So up at Ohio Street or down by the 59th Street bridge, for instance, it gets really, really narrow.” 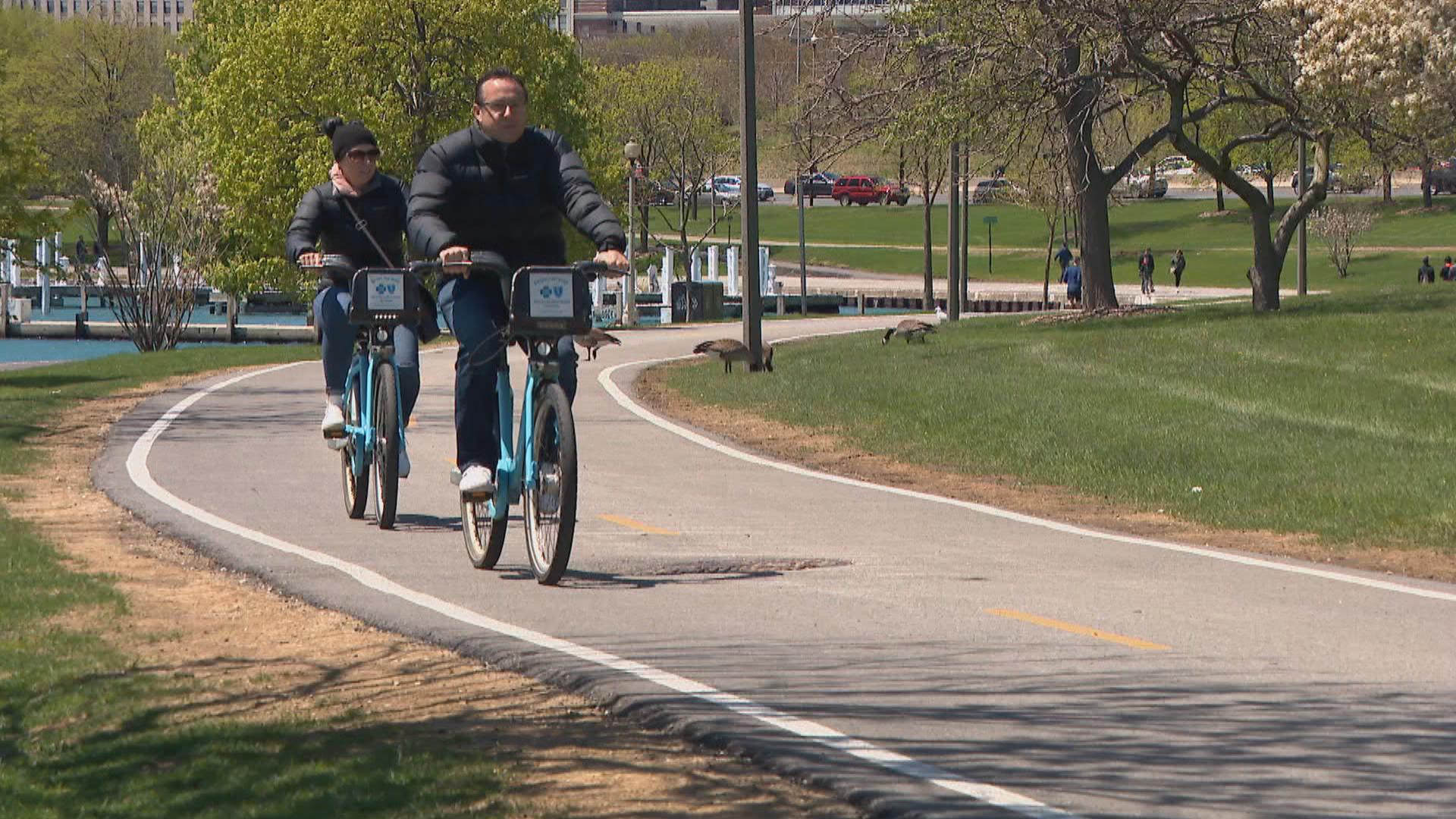 The new trail features a pedestrian path about 20 feet wide and a bike path about 14 feet wide. In redesigning the trial, the Park District worked with the Active Transportation Alliance and the Chicago Area Runners Association to take into account “all the different types of things happening out here, from recreational use to individual use to events, (and) peripheral types of trail users and park users, from the birders to the beachers, to trees, and softball and soccer, all the way to ADA issues,” said Greg Hipp, executive director of the Chicago Area Runners Association.

The new trail layout has drawn some criticism. Near Montrose Beach on the north end, the new bike path meanders east of Cricket Hill, adding some distance to the ride. Near Foster Beach, the bike and pedestrian paths briefly converge. But for the most part, early feedback appears to be positive. Rerouting the trail under viaducts avoids crossings at several busy east-west streets. And another long-awaited improvement to the trail, the Navy Pier Flyover, is close to reality.

“If you’re cruising down the trail on your bike or you’re walking or running, you don’t want to have to cross all that vehicle traffic, especially during the summer when there are so many people going in and out of the pier,” said Kyle Whitehead, public affairs director for the Active Transportation Alliance.

The section of the flyover that carries the trail over Grand Avenue is finished, after multiple delays. The final portion that will go over the Chicago River is scheduled to be finished by the end of the year.

The Park District says it will monitor the newly separated trail to see how people are using it.

Most of the signage directing trail users to the appropriate path is painted on the pavement. Some stretches of the trail don’t yet have pavement markings, but now that the weather is starting to improve, the Park District should finish painting soon. There are also signs to help orient riders and walkers. 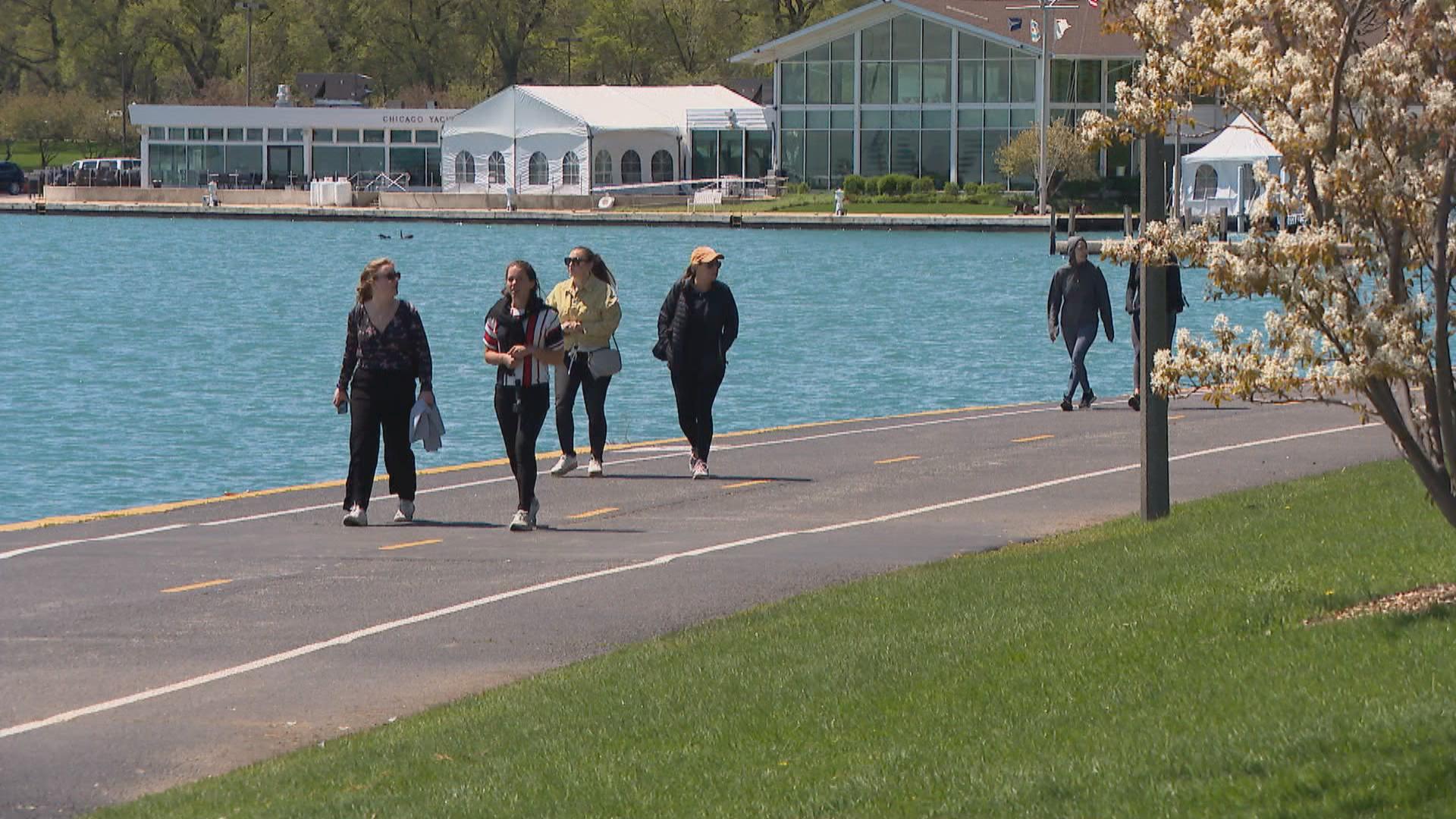 There are still some unanswered questions about the new trail, like which side vehicles other than bikes should go on. Instituting a speed limit has been discussed, but the Park District’s not ready to commit to one. For now, it’s more concerned about whether people are using the correct side of the trail.

“It’s really going to have to be something people accept as a cultural thing of where they should and shouldn’t be. It’s up to trail users to make this trail a success,” Hipp said.

“This is the first year that both trails are open and we don’t have to navigate around construction,” Gleason said. “I think our best advice would be, until you get used to the new configuration, use caution and slow down and look at the signs.”

Peter Keller, who bikes from South Shore all the way up to Howard Street on the North Side, agrees.

“You have to follow the signs. I think the bikers know more than anybody because we’re constantly moving and looking,” Keller said. “We are going a lot faster so we don’t want to collide.”