US Makes New Push for Graphic Warning Labels on Cigarettes 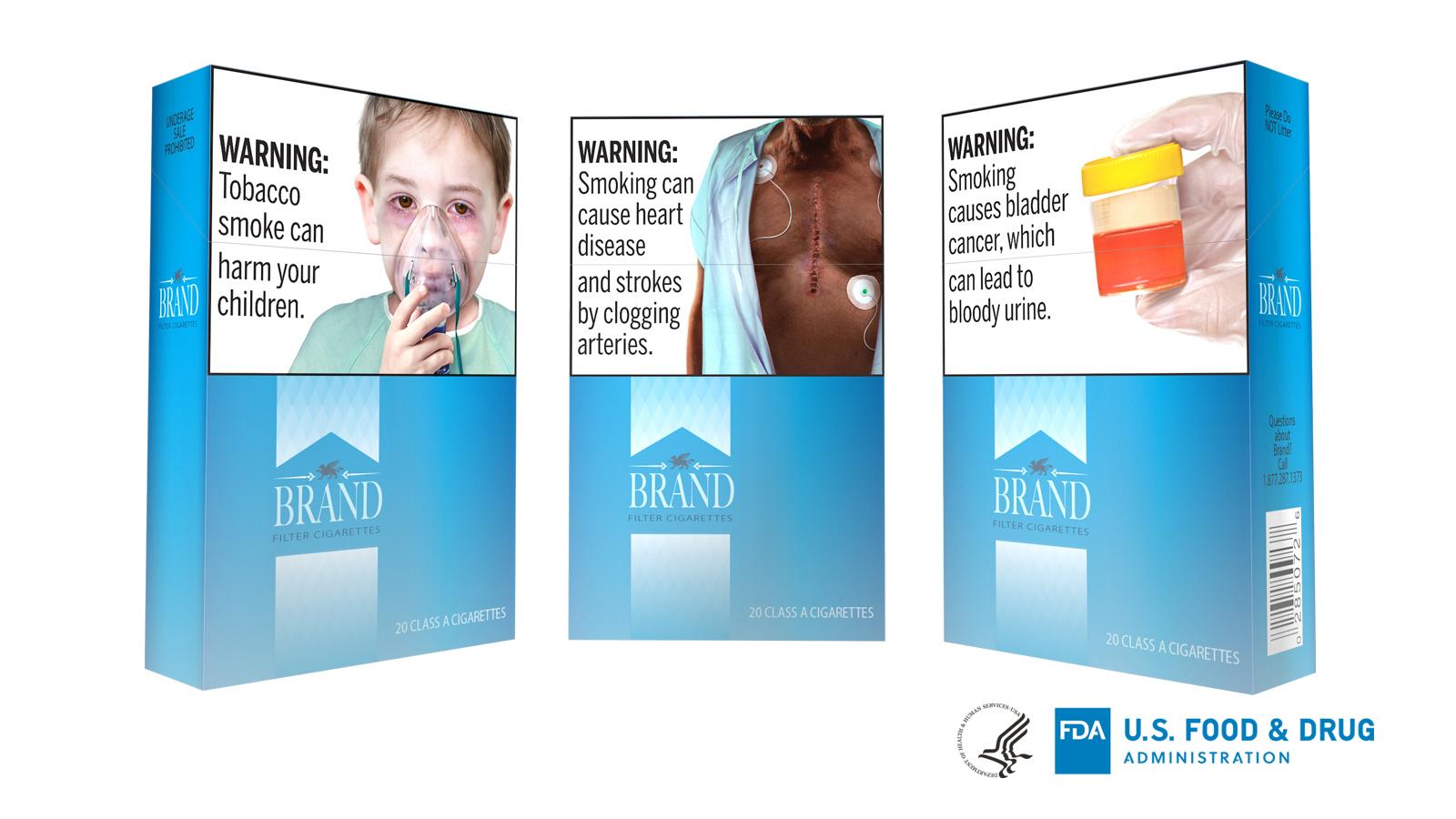 This undated image provided by the U.S. Food and Drug Administration shows proposed graphic warnings that would appear on cigarettes. The Food and Drug Administration on Thursday, Aug. 15, 2019, proposed 13 new large, graphic warnings that would appear on all cigarettes, including images of cancerous tumors, diseased lungs and bloody urine. (FDA via AP)

WASHINGTON (AP) — U.S. health officials are making a new attempt at adding graphic images to cigarette packets to discourage and Americans from lighting up. If successful, it would be the first change to U.S. cigarette warnings in 35 years.

The Food and Drug Administration on Thursday proposed 13 new warnings that would appear on all cigarettes, including images of cancerous neck tumors, diseased lungs and feet with amputated toes.

Other color illustrations would warn smokers that cigarettes can cause heart disease, impotence and diabetes. The labels would take up half of the front of cigarette packages and include text warnings, such as “Smoking causes head and neck cancer.” The labels would also appear on tobacco advertisements.

The current smaller text warnings on the side of U.S. cigarette packs have not been updated since 1984. They warn that smoking can cause lung cancer, heart disease and other illnesses. These warnings “go unnoticed” and are effectively “invisible,” the FDA said it its announcement.

The FDA’s previous attempt was defeated in court in 2012 on free speech grounds. A panel of judges later upheld the decision, siding with tobacco companies that the agency couldn’t force cigarettes to carry grisly images, including cadavers, diseased lungs and cancerous mouth sores.

FDA’s tobacco director Mitch Zeller said the new effort is supported by research documenting how the warnings will educate the public about lesser-known smoking harms, such as bladder cancer.

“While the public generally understands that cigarette smoking is dangerous, there are significant gaps in their understanding of all of the diseases and conditions associated with smoking,” said Zeller. If the agency is sued, he added, “we strongly believe this will hold up under any legal challenges.”

Reynolds American, maker of Camel and Newport cigarettes, said it supports public awareness efforts on tobacco, “but the manner in which those messages are delivered to the public cannot run afoul of the First Amendment.” Reynolds was one of five tobacco companies that challenged the FDA’s original warning labels.

The nation’s largest tobacco company, Altria, said it will “carefully review the proposed rule.” The company, which makes Marlboro, was not part of the industry lawsuit.

Nearly 120 countries around the world have adopted the larger, graphic warning labels. Studies from those countries suggest the image-based labels publicize smoking risks and encourage smokers to quit.

“This is a deadly product,” said Fong, who studies anti-tobacco policies at Canada’s University of Waterloo. “We have more prominent warnings on many other products that don’t pose even a fraction of the risk that cigarettes do.”

Canada became the first country to put graphic warnings on cigarettes in 2000.

Smoking causes more than 480,000 deaths each year in the U.S, even though smoking rates have been declining for decades. Approximately 14% of U.S. adults smoke, according to government figures. That’s down from the more than 40% of adults who smoked in the mid-60s.

Under the 2009 law that first gave the FDA oversight of the tobacco industry, Congress ordered the agency to develop graphic warning labels that would cover the top half of cigarette packs. The FDA proposed nine graphic labels, including images of rotting teeth and a smoker wearing an oxygen mask.

But a three-judge panel ruled that the FDA’s plan violated companies’ right to free speech. The judges said the images were unconstitutional because they were “crafted to evoke a strong emotional response,” rather than to educate or warn consumers.

The FDA said it would develop a new batch of labels, but when new ones didn’t appear, eight health groups sued the agency in 2016 for the “unreasonable delay.”

Under a court order this year, the FDA was required to propose new labels by August, with final versions by next March.