It’s a job as old as time. But one Chicagoan is beekeeping in her own unique way.

It’s a passion that’s not for the faint of heart. But for graphic designer-turned-beekeeper Jana Kinsman, it’s a labor of love.

Kinsman was bitten by the beekeeping bug after taking a class at the Chicago Honey Co-op in 2011. She then did an apprenticeship with a beekeeper in Eugene, Oregon. And with that experience, she knew she wanted to bring her skills back to Chicago.

Today, Kinsman is harvesting honey at the Experimental Station which hosts the 61st Street Farmers Market.

Kinsman has enlisted the help of Madeline Bourdenko, one of the staffers at the Experimental Station. It’s her first time harvesting honey.

Each box houses nine frames that the bees use as their home base. They can fly up to five miles in their hunt for flower nectar. 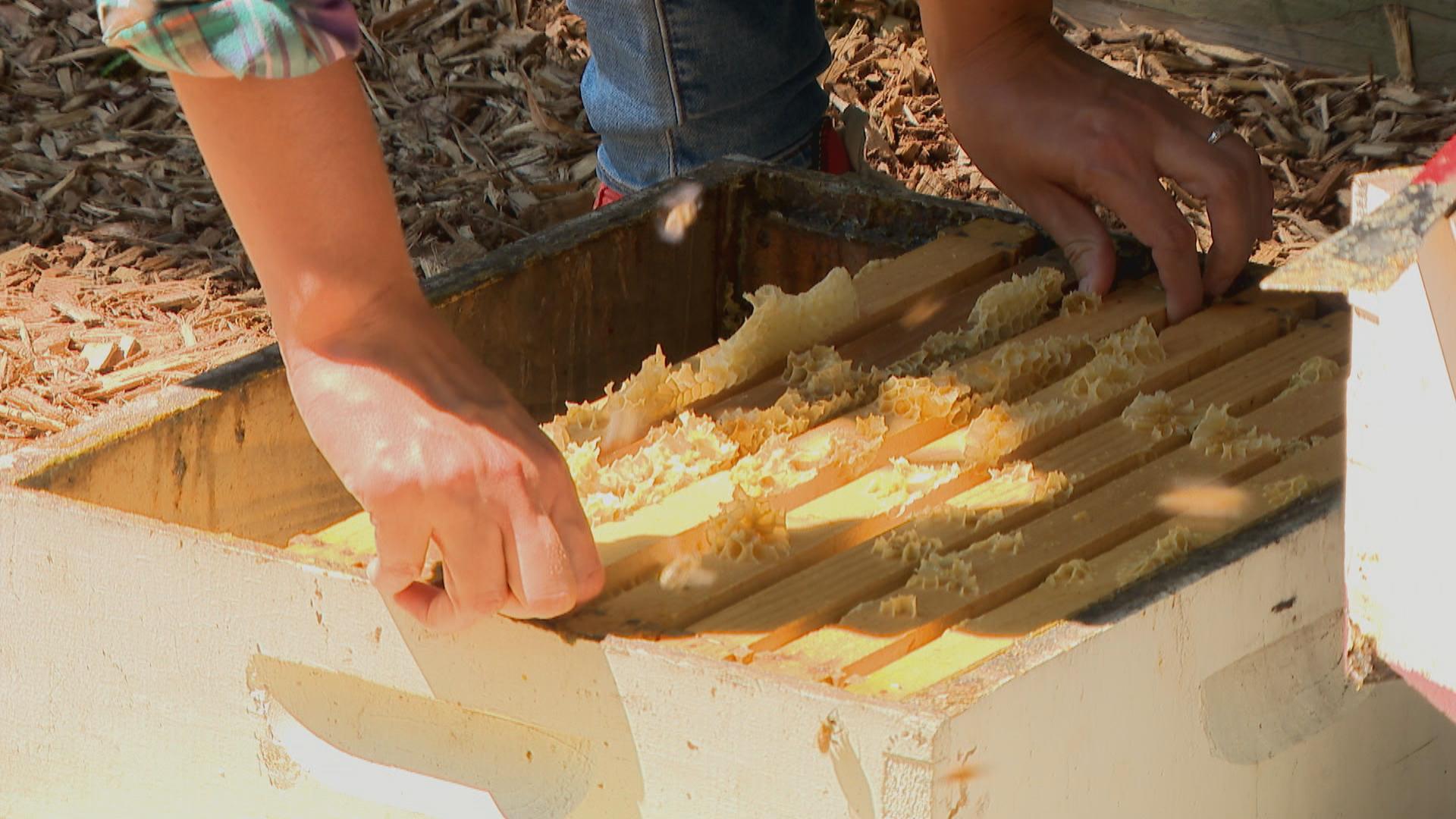 Kinsman has about 40 hives around the city, from Chatham to Pilsen. What makes this so remarkable is that the majority of her work is done by bicycle.

The idea was hatched during her apprenticeship in Oregon.

“I made a joke like ‘I’m gonna do this when I get back to Chicago, but I’m gonna do it on my bicycle since I don’t have a car.’ At that time I just wanted to prove that you could do anything by bicycle,” she said.

On this day, Kinsman will bike her 120-pound load from the Experimental Station on 61st Street and Blackstone Avenue about 5.5 miles to her workshop in the Back of the Yards neighborhood.

The Plant is a former meat processing facility located at the former home of the Union Stock Yards that’s been turned into this 93,000-plus square foot space for small food businesses. 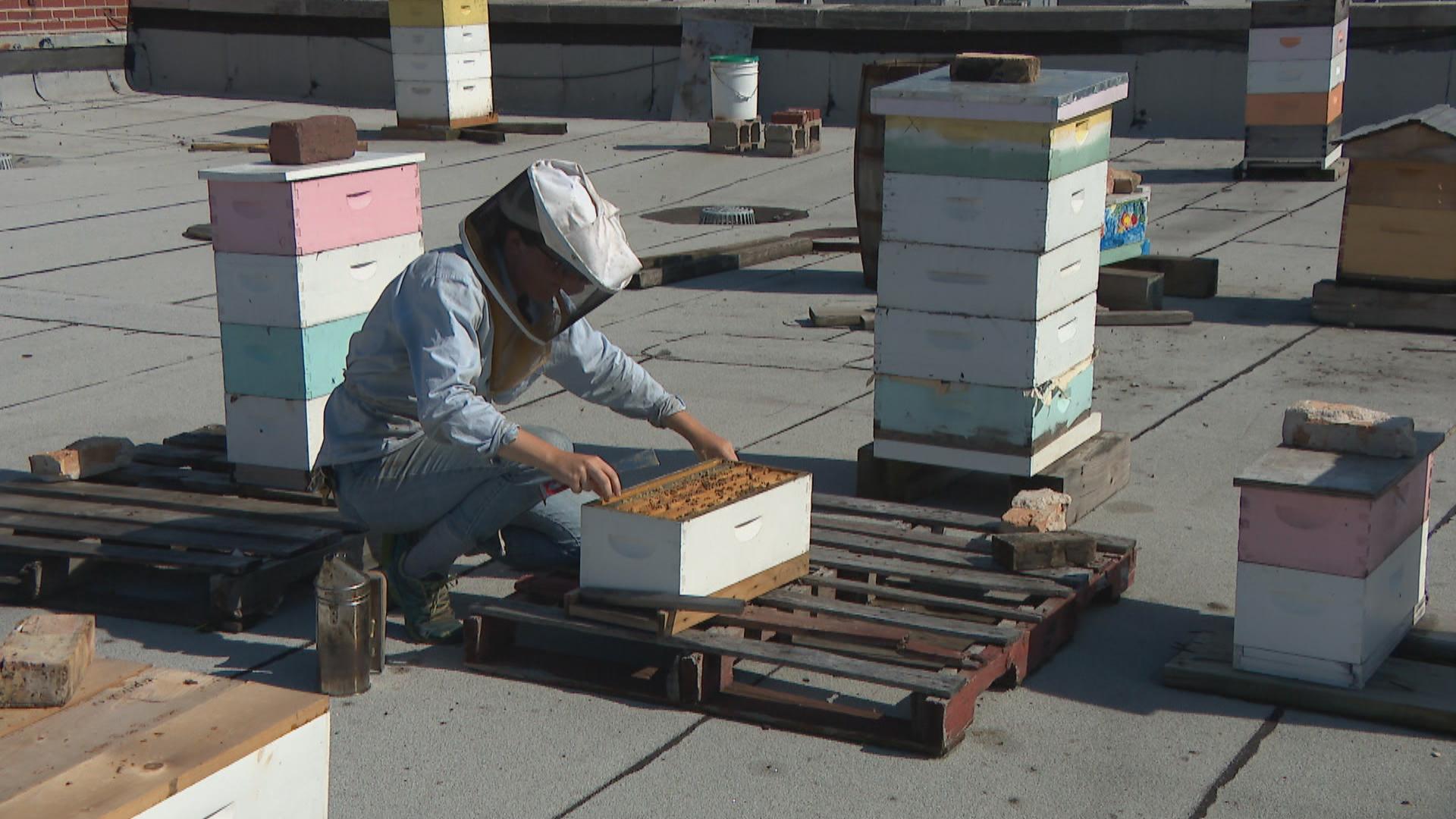 A successful Kickstarter campaign helped Kinsman launch Bike A Bee in 2012. She asked various community gardens to host her hives and nearly all said yes – including this rooftop at The Plant. But there was a steep learning curve during her first season.

“It was a drought year,” Kinsman said. “The hives did not even make enough honey for them to survive the winter. It was really difficult, and then the next spring I had to raise more money to keep the project going.”

In addition to a few business roofs, Kinsman also has hives in public community gardens and urban farms. She bikes to all 40 hives every seven to 10 days to make sure the queens are healthy, the hives haven’t been vandalized and to check whether it’s time to harvest the honey.

Back in her workshop, Kinsman scrapes off the wax cap that’s holding the honey in place and saves it for candles and other products she’s developing.

After that, the honey-soaked frame is put into a centrifuge and spun in both directions to extract every drop. The golden liquid is then poured through a fine strainer to get out any debris. 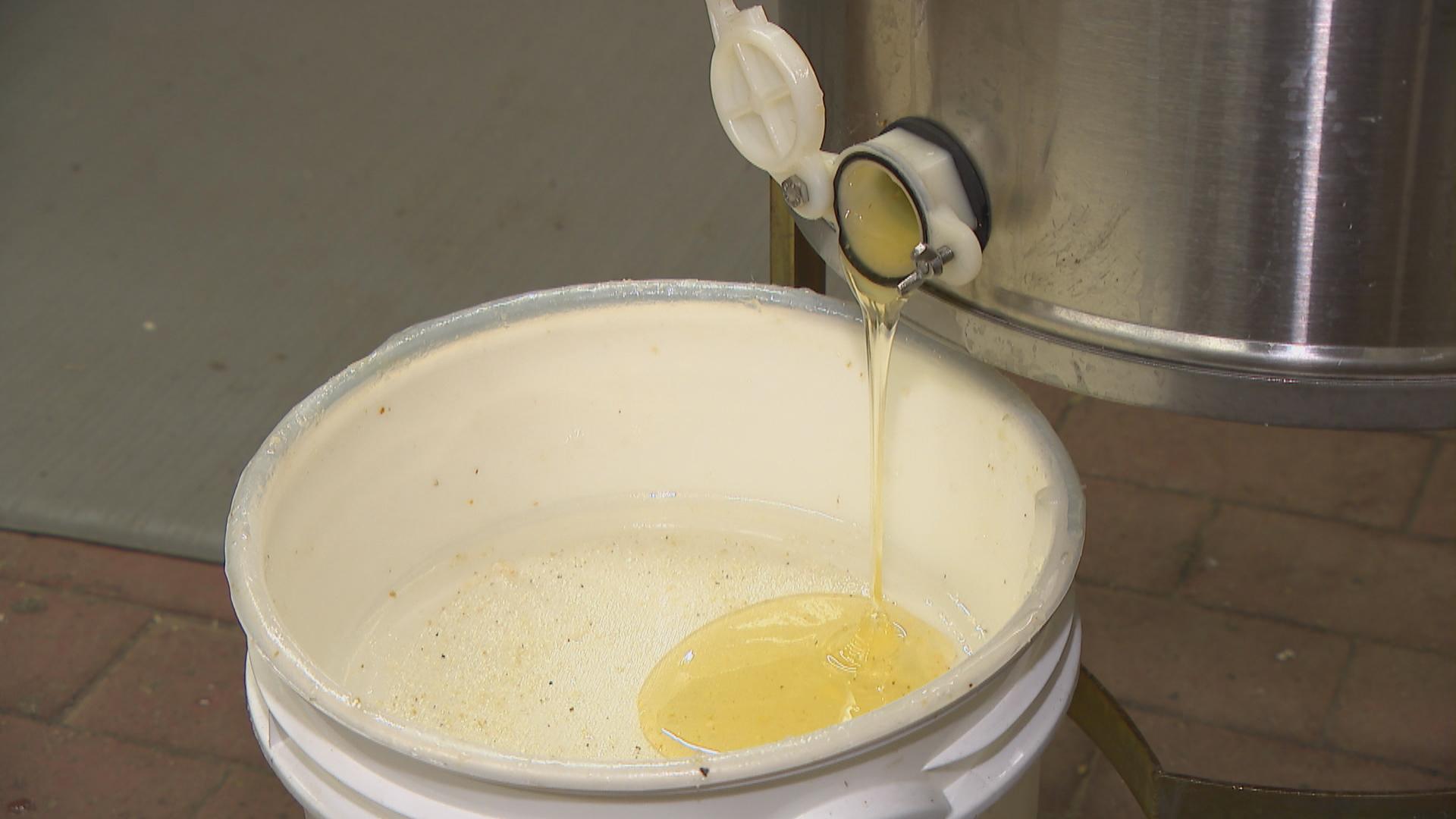 “I love to just sit down at the end of the season and taste all of them back to back and see how they compare,” she said.

Kinsman estimates she’ll harvest between 50 to 60 gallons of honey this summer.

Despite the sweet benefits, beekeeping is serious business and isn’t for everyone. But if you want to help bees flourish, Kinsman has a simple suggestion:

“If you want to help bees, think more about how you can benefit all insects in your backyard or in your community garden plot,” she said. “Planting native flowers, not spraying your lawns, letting the clover grow, letting the dandelions grow. That benefits all insects.”

Kinsman has been stung over the years, but sees it as a minor hazard of the job – like biking in Chicago traffic.

“I really love beekeeping and I love the animal husbandry of it, but my goal is to have that side of it kind of uplift the education efforts through community gardens to get more Chicagoans engaged in nature and in bees,” she said. 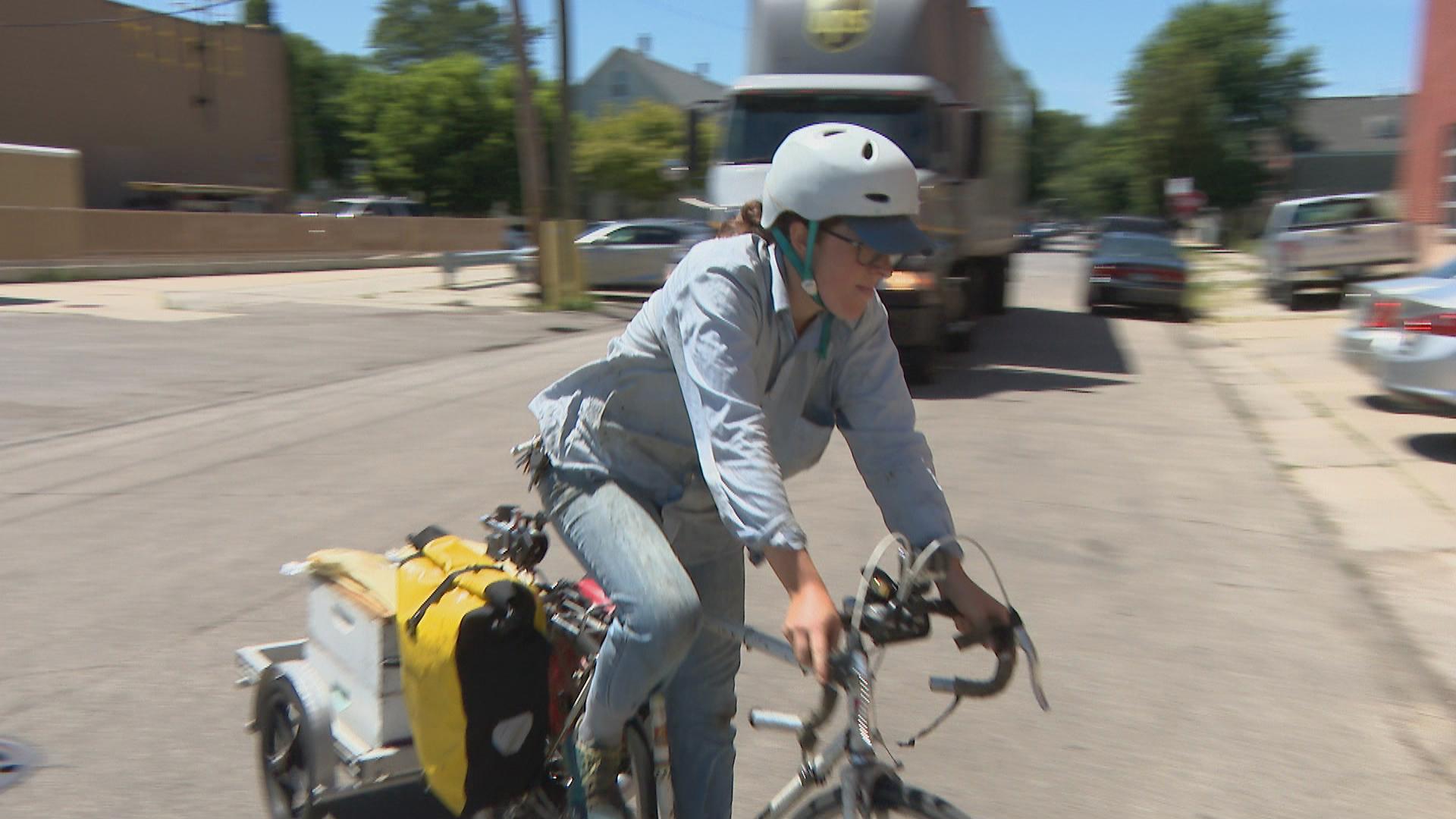 No bees, cameramen, producers or helpers were harmed in the filming of this piece.

If you’re interested in beekeeping, Jana Kinsman offers Bike a Bee apprenticeships between May and September.

Why do bees make honey?

“Bees make honey so that they can have something to eat over the winter when there’s nothing blooming and it’s too cold to go outside,” Kinsman said.

What determines the honey’s color?

The color of the honey changes with the types of flowers the bees get their pollen from. Harvested honey gets darker as the season progresses because of the of flowers that are in bloom. “The aster family plants start to bloom, like golden rod, and that really produces a darker honey,” said Kinsman. “But I don't really harvest honey after now because whatever [the bees] harvest now is what they will keep for the wintertime. We just take this high-summer bounty and then they keep the rest.”

What exactly do the bees do to make honey?

Honey is concentrated flower nectar. “Flowers produce nectar as a way to attract pollinators to their flower and help them complete plant reproduction,” said Kinsman. “The bees gather it in a special stomach called their honey crop. The bees gather it at the flower and they visit millions of flowers and they start to – once their honey crop is full – they bring it back to the nest where they then regurgitate that into one of the cells of wax. And then the rest of the hive keeps air moving throughout the hive and keeps the hive really hot like about 96 degrees and through evaporation and heating, the nectar slowly evaporates all of the water out of it until it’s about 70% sugar, 30% water. At that point, the nectar becomes honey.”

Does the honey sold need to be heated?

No. Honey does not need to be heated or pasteurized like milk.

“What raw honey means is that the honey has not been heated over 110 degrees Fahrenheit. If you heat honey beyond 110 degrees, it loses its enzymes and probiotic properties and can destroy some of the vitamins and minerals. Not to mention, it totally changes the flavor profile,” said Kinsman. “The reason why honey is heated is so that it can go through an extremely fine micro-filter and then have the particulates removed so then it is shelf stable. So there’s no reason to have it heated. But it’s not less safe to have raw honey than it is to have heated honey. In fact, it’s better for you if your honey is raw because it contains all the good things.”

What kind of bees do you keep?

They’re European honeybees -- apis mellifera. “And that’s the only bee that makes honey commercially in the United States,” Kinsman said.