Reich had chronicled his mother’s late-onset Post Traumatic Stress Disorder that brought her back to the horrors she and her family endured during the Nazi occupation and her time spent on the run, in hiding. That lead to a book, “The First and Final Nightmare of Sonia Reich: A Son’s Memoir,” and a documentary film, “Prisoner of Her Past.”

But having grown up with both parents who were Holocaust survivors in a community of Holocaust survivors (Skokie), Reich avoided most anything to do with the Holocaust unless it was part of a work assignment. So he prepared for his interview with Wiesel by reading his works. The two spoke together in front of an audience at Orchestra Hall in 2012 where Wiesel received the Chicago Tribune Literary Prize.

The interview went so well that Wiesel offered to keep the conversation going. It lasted four years, and turned into an article and a book, “The Art of Inventing Hope: Intimate Conversations with Elie Wiesel.”

Reich joins us in discussion.

Below, an excerpt from “The Art of Inventing Hope.” 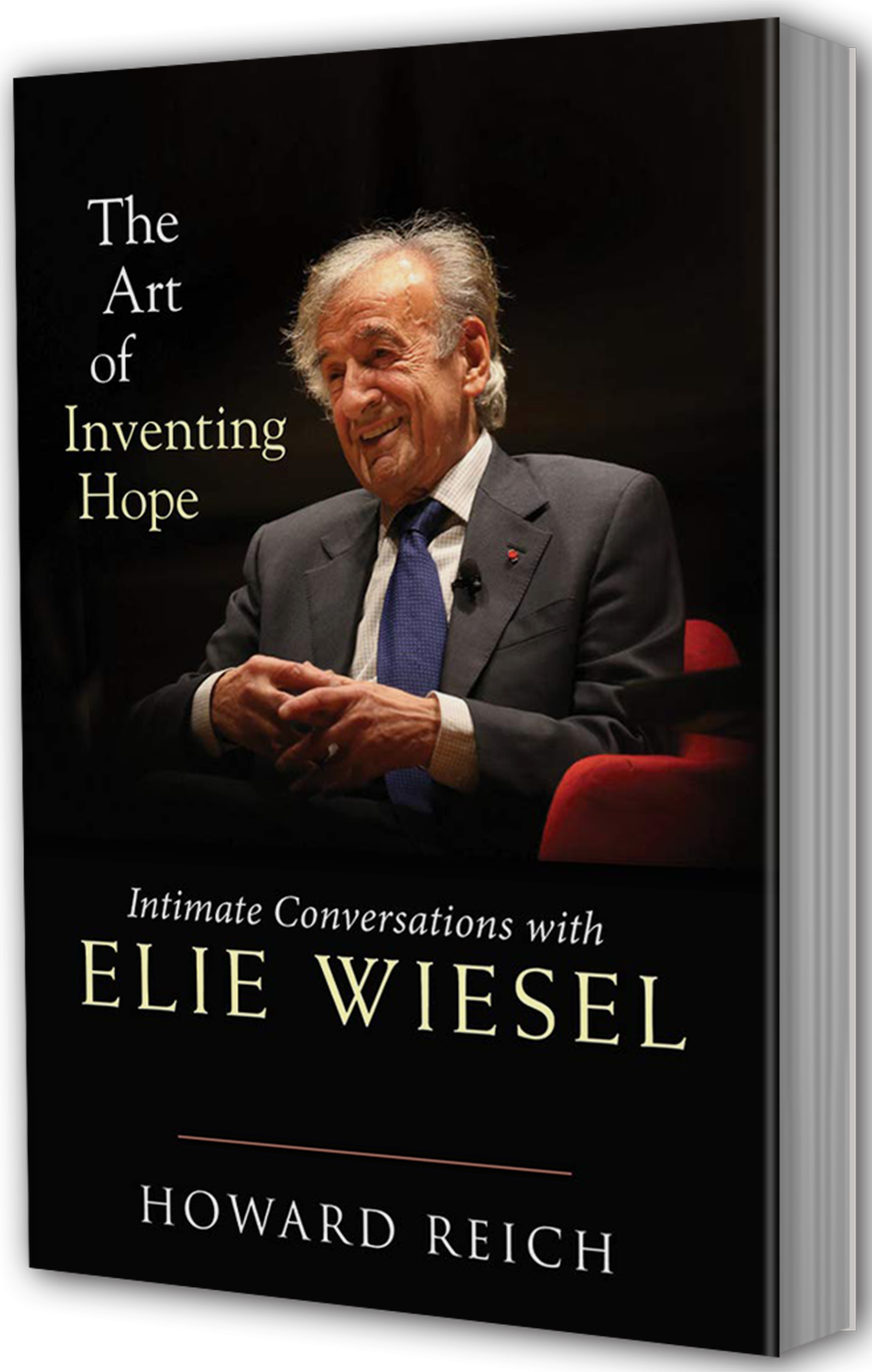 “I rarely have a good feeling about my writing,” said Wiesel, speaking specifically of his prose on the subject of the Holocaust. “It depends what, of course. But let’s say vital, or vitally important, is if I write about that war and that Event and that suffering and everything about it, I always feel it’s not right. It’s still not there. It’s not perfect.”

Rarely, added Wiesel, “do I have a feeling: ‘Ah, now I found the words.’ Again, the words cannot . . .” he said, his voice trailing off. It was as if he were saying, through his ensuing silence, that in this instance words are inadequate even to describe their own inadequacy.

All of which begs a question: Why do we even try? If Wiesel is right that language cannot articulate what happened, and if he is correct that anyone who was not there cannot understand—and surely he must be correct in both cases—then why try to write or speak of this? Why indulge in an effort that by Wiesel’s own estimation cannot succeed?

The reason may have to do with another, seemingly contradictory belief that Wiesel often referenced in our conversations: that new wit‑ nesses must be created so that they can tell the story and generate still more witnesses. In effect, Wiesel seemed to be standing at the nexus of two opposed positions: the failure of words to express what happened and the necessity of continuing to express it.

I posed this paradox to him.

“What is the alternative?” he asked. “Not to write? If I could find another way. So not to write? And yet you must. With the doubts and with the questions, you must write.”

Even if language has failed us?

“Failed to say what?” asked Wiesel. “To say something that cannot be said?”

The failure, he seemed to be saying, was not really a failure of language, nor of our attempts to harness it, but of humanity itself. Language is simply our means of coming to terms with that larger failure, a quixotic but essential attempt to explain the unexplainable.

“Logically I should have given up on language,” said Wiesel, amplifying the point.

“First of all, the killers also used language. Some of them actually were very erudite and cultivated and educated men and women. And they also read Goethe and Fichte and they listened to Beethoven and Bach. If they did it, how can I believe in the same things they believed in?” Meaning language, literature, and music, among other things.

Clearly we can’t relinquish these components of civilization simply because they were co‑opted by Nazis. Language can be redeemed, Wiesel said, and the quest to do so was worth pursuing, even if it might not prevail.

“With God’s grace, I may find the right words,” Wiesel said, hoping for a turn of events that he believed has not yet occurred. “So why should I give up? Why should I deprive my students or my readers from the language they use, simply because the killers are the ones who used it?”

There’s another, more personal reason to write of these events despite the obstacles: the model of those who wrote under dire circumstances. Emanuel Ringelblum and colleagues documented the horrors of the Warsaw ghetto in real time, even though he and most of the others did not survive the war and live to see their words read and known by anyone. Presciently they buried their writings beneath the wreckage of the ghetto, one batch of their precious texts discovered in September 1946, another in December 1950. The authors died, but their words lived.

Similarly a few notebooks hidden amid the ashes of Birkenau— such as the diary of Leib Langfus—were found decades later, the near dead having documented their final observations in the midst of their destruction. And Shimon Dubnow, a revered Jewish historian, is believed to have proclaimed aloud before being executed in the Riga ghetto, “Write—and record” (in Yiddish, “shrayb—un farshrayb”).

If they believed in writing and speaking, so must we, said Wiesel. “So how can I dare to say, ‘I am better than you, and therefore I am not writing’?” he asked, in light of these examples and others. If the victims found hope in language, even in the hours before their deaths, how can we not?

Wiesel interpreted his great difficulty in getting Night published and its long period of obscurity to the magnitude of the events it chronicled and to the world’s inability to absorb them. In effect, at least a generation needed to pass before the public at large realized that it needed to learn about the Holocaust.

The turning points, said Wiesel, came in Israel during the Eichmann trial, which in 1961 revisited the horrors of past events, and the Six-Day War in 1967, which—until its stunningly swift conclusion—suggested that genocidal disaster was on the verge of occurring again.

In the United States, I believe the breakthrough came a decade later, with the aforementioned 1978 TV broadcast of Holocaust, an ABC‑TV miniseries, which for the first time put the subject where most American discourse takes place: popular culture.

In the decades that followed, Wiesel’s Night has been studied world‑ wide as a startling perspective on an event that its author considered indefinable. Why did Night capture so many readers? What did Wiesel put in its pages that gave millions insight into what its author deemed impenetrable events?

How did Wiesel, in other words, find a way of speaking and writing of the Holocaust that reached across so many decades, generations, and continents?

“I swear to you, I don’t know,” said Wiesel, as if mystified by the global embrace of the words he wrote. “I have published sixty books, and the others are all jealous of Night. They come to haunt me in my dreams. My other books are as good. It’s luck.”

If so, it clearly came at a steep price. But of course it was much more than luck. For starters, it was the experiences that those words reanimated—the tragic, hard‑won knowledge that Wiesel brought to his text—that eventually made Night required reading. It wasn’t only the poetic lyricism of Wiesel’s prose but the events they soberly illuminated, from the ominous opening pages set in Wiesel’s hometown of Sighet to the tragedies of Auschwitz and Buchenwald.

If, as Wiesel has said, “words can sometimes, in moments of grace, attain the quality of deeds,” the words in Night became a remarkable deed: the opening of a pathway into the Holocaust for those who were not there.

But when I suggested to Wiesel that anyone is lucky not to have his knowledge of this subject—that the Holocaust is one area of study in which no one wants personal experience or expertise—he surprised me by disagreeing. Though gently.

“I’m not so sure,” he said. “Since it happened, I feel that it’s right that I should be a part of it. Since it happened. But I would have given anything in the world that it didn’t happen.”

This was a surprising observation. Wiesel said that if the Holocaust were going to happen, he needed to belong to it, to experience it, to witness it, to present its narrative to the rest of us. His writing and his fate were intertwined, so far as he was concerned, and perhaps this explains the lasting power of his way of writing and speaking of the Holocaust. He wrote not as an accidental witness but as one whose destiny—by virtue of his Jewish identity and the time and place in which he lived—was to be caught up in the Holocaust and later to attempt to describe it.

From that perspective, perhaps Wiesel tells us something valuable about how to address this subject: as if it is our sacred duty to grapple with an event that we would have given everything to have prevented. As if we should want to embrace this most tragic of stories because of who we are.

Furthermore, Wiesel said that the ideas and imagery and emotions rising up from the thousands of pages he has written carry a mysterious power of their own, apart from what he did to put them there.

“I know that the words are inadequate—all the words are,” he said. “But nevertheless, I write them. I think the great mystery of life is to be able to put one word to another. And that everything is mystery—even the silence separating the words is mystery.”

Those silences rang out eloquently in Night, not only in the silences between the words in this slender volume but also in what was left unsaid in it. Repeatedly Wiesel avoided exposition, as in the aftermath of his father’s death in Buchenwald—where Wiesel himself and my father also very nearly expired.

“I shall not describe my life during that period,” Wiesel wrote in Night. “It no longer mattered. Since my father’s death, nothing mattered to me anymore.”

This was Wiesel’s way of speaking of the Holocaust—telegraphically, compactly, with much left unstated and with utmost respect to those who no longer could speak for themselves.

“Two of my older sisters survived,” Wiesel said to me, in developing this thought. “I never talked with them about it, except certain occasions.”

And then only circumspectly. Wiesel told me that he never asked his surviving sisters what their mother and other sister said during the selection at Auschwitz, moments before their executions. He could not violate something so sacred, and in that act he taught us something about how we should treat such matters. With reverence and, sometimes, with respectful silence.