The original logo for paint manufacturer Averill (top) was the first trademark filed in the U.S., in 1970. British beer producer Bass filed the first European one in 1875, and the red triangle it contained is still found in the current logo (bottom). (Courtesy of Taschen)

(CNN) -- The oldest registered trademark in the United States dates back to 1870, when it was filed by paint manufacturer Averill. Against the backdrop of Chicago, an eagle is depicted holding a paintbrush in its beak. The words “Durable, Beautiful, Economical” appear in a banderole. It has, to modern eyes, a very quaint feel.

Five years later, England’s Bass Brewery registered Europe’s first trademark, a simple red triangle that, in comparison, feels contemporary. It can even be spotted on beer bottles appearing in paintings by Édouard Manet and Pablo Picasso, and still serves as the Bass logo to this day.

And while rudimentary logos – such as those appearing on ancient Greek pottery – had already existed for thousands of years, modern logo design began as recently as the mid-19th century, said Jens Müller, author of “Logo Beginnings,” a new book that chronicles the early history of logos.

“It starts in the 1850s, with industrialization and branding,” Müller said in a phone interview.

It was at that time, Müller added, that the trade of manufactured goods started to go beyond regional distribution. Logos arose as a necessity to identify, distinguish and elevate a product from its competitors, or to tell its story and provenance. Once brands and the symbols used to represent them emerged, efforts to legally protect them against imitation soon followed.

Intriguingly, the two earliest trademarks from America and Europe also represent the two most basic types of logos: figurative and abstract. Every logo can be ascribed to one of these groups, according to Müller, although many subcategories also exist.

The wordmark is a type of logo that consists exclusively of text, such as a company name or a monogram. Other types of logos include the emblem, an often circular stamp-like arrangement of images and text, such as the BMW logo; the mascot, an image of a character representing the brand, such as the KFC logo; and the pictorial mark, which is based on an icon or similar graphical element, like the Apple logo.

To come to this conclusion, Müller scrutinized almost 10,000 logos. “One thing I didn’t expect was the high number of handwritten wordmarks, like the signature of a company founder. The most famous ones are the Ford or the Kellogg’s logo, which are still used today in their original form.” 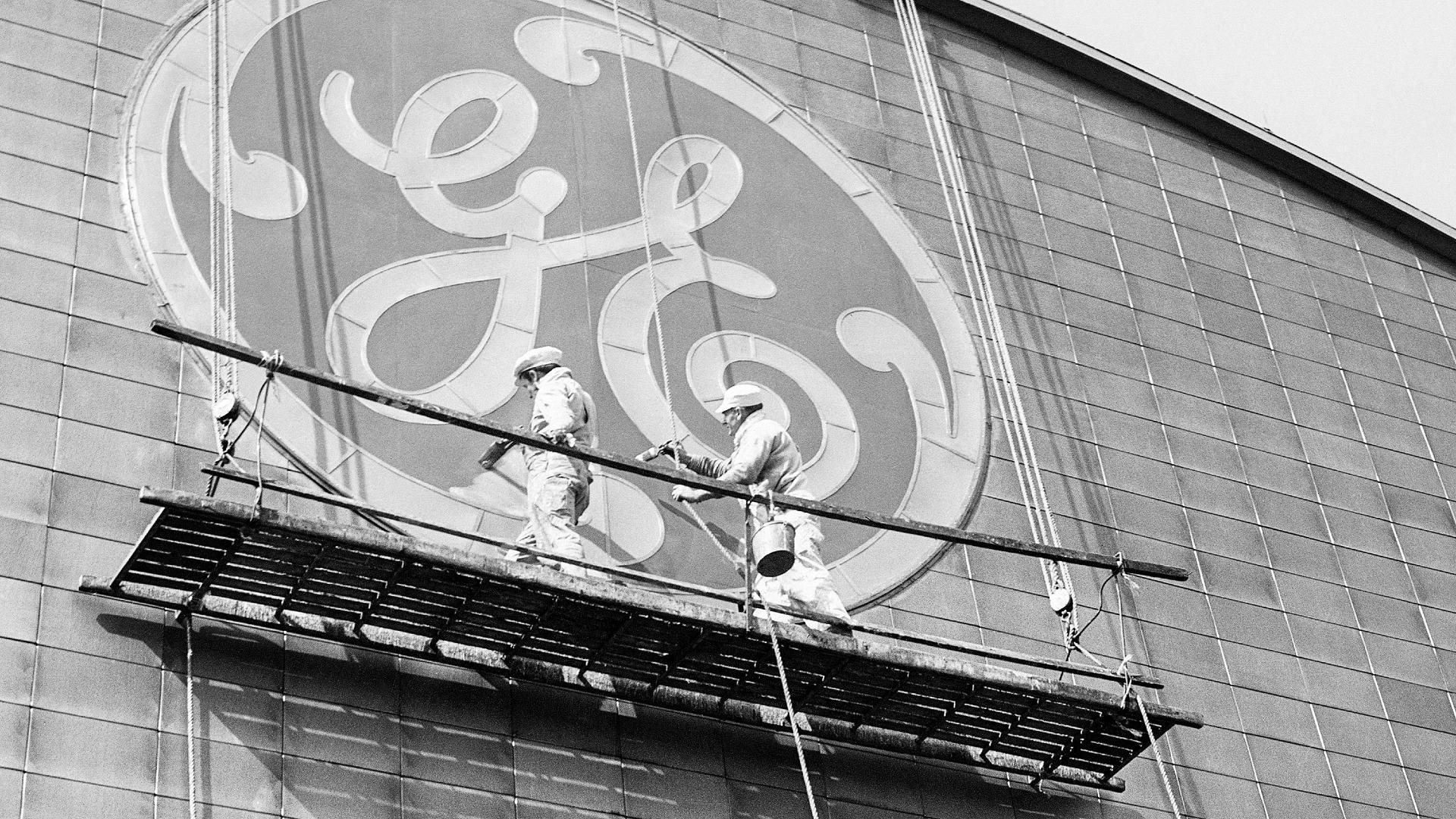 The General Electrics logo, unchanged to this day, is drawn on a building at the New York World's Fair, circa 1935-45. (Courtesy of Taschen)

Perhaps the most famous wordmark logo is the Coca-Cola one, introduced in 1886 and designed in Spencerian script – a popular writing style at the time – by Frank M. Robinson. Robinson was the bookkeeper and business partner of the drink’s inventor, John S. Pemberton. It survives practically unchanged, and was trademarked in 1893, when the words “trade mark” were added to the long tail of the first “C.”

That explicit reminder had reason to exist: the Coca-Cola logo would soon be under siege by imitators. In 1923, the company published a collection of court orders against competitors who had created similar logos for their products. It had 700 pages.

By this time, the importance of branding and logos had become obvious. A 1930 advertisement from Louis Vuitton is dominated by the “LV” mark itself, with the two letters surrounding an image of several pieces luggage lined up in a similar configuration. “That’s a good example of a company that found out early on how important branding is, and that they could just sell their wares so much better with their iconic branding on it,” Müller said. “It’s from years before the golden age of advertising (1960 to 1980), but it shows how companies were starting to understand that much of their value comes from brands and logo design.”

One major trend in the history of logo design is the evolution from ornate, figurative marks to a more deliberately reduced, streamlined aesthetic – although this didn’t start until the early 20th century.

A classic example of this streamlining is the logo of American multinational company 3M, well known for its Post-it and Scotch tape brands. The full name of the business is “Minnesota Mining & Manufacturing Company,” which was reflected in its earliest logos, before being shortened to “3-M” in the early 1900s. In 1977, New York agency Siegel+Gale made the logo even simpler, using the ever-popular Helvetica font and the color red to conceive the version of the logo that is still used today.

“That is a good example of logo modernism, but also of a branding that really got reduced to the most minimalist design,” Müller said.

Müller says that wordmarks are still very popular today, because they can help avoid confusion in a world crowded with too many logos. “A lot of companies now prefer to use their name as their branding, rather than some abstract design, so the chance of somebody raising their hand and saying ‘We have the same logo’ is smaller.”

Perhaps one of the most interesting things about logo design is that it defies a clear narrative, Müller said: “I think the fact that there is not (just) a single way in which things have evolved is maybe the reason why there hasn’t been a book like this before -- because it’s hard to tell this story in a very definite way.”

“Logo Beginnings,” published by Taschen, is available in Europe and the US.