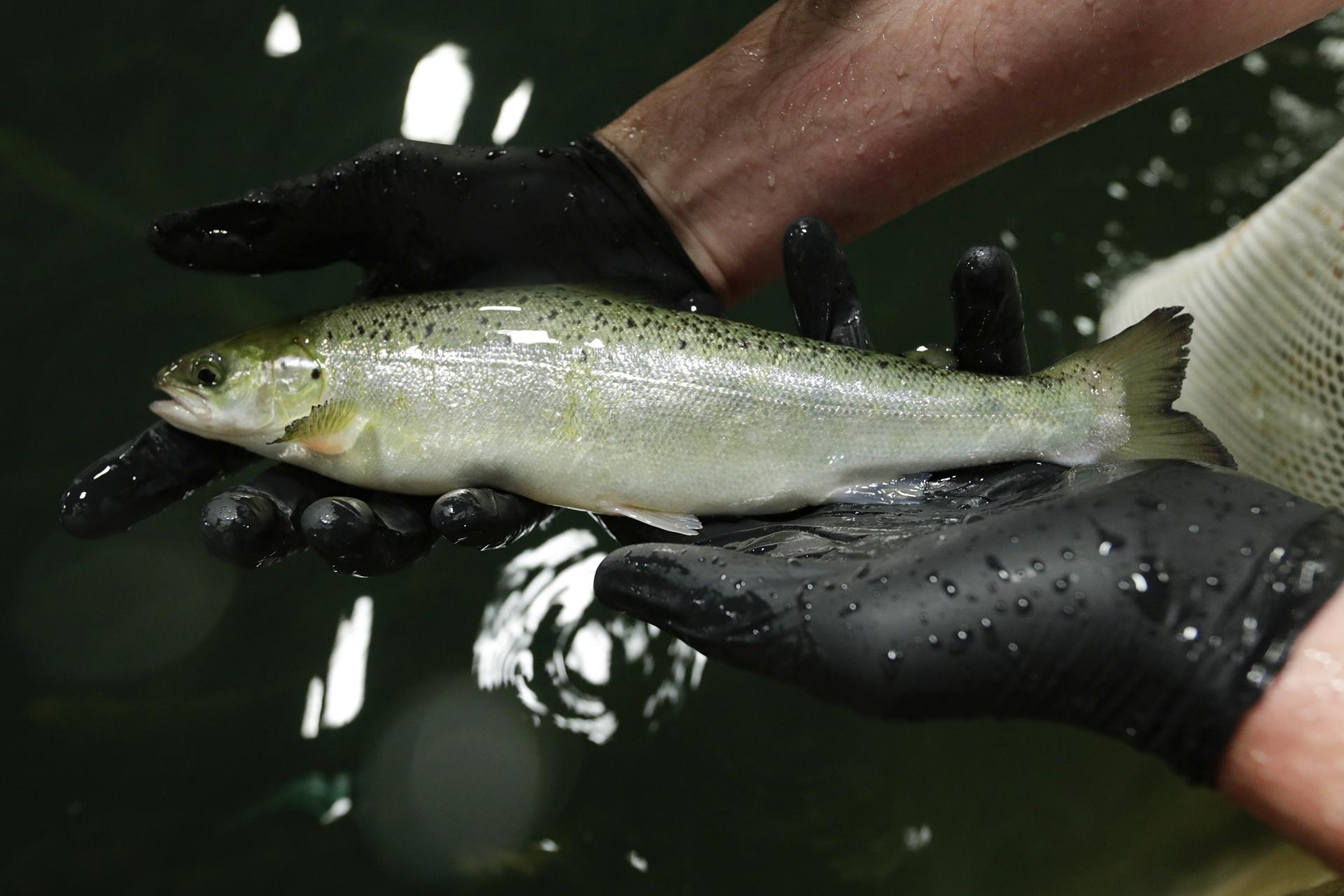 NEW YORK (AP) — Inside an Indiana aquafarming complex, thousands of salmon eggs genetically modified to grow faster than normal are hatching into tiny fish. After growing to roughly 10 pounds in indoor tanks, they could be served in restaurants by late next year.

The salmon produced by AquaBounty are the first genetically modified animals approved for human consumption in the U.S. They represent one way companies are pushing to transform the plants and animals we eat, even as consumer advocacy groups call for greater caution.

AquaBounty hasn’t sold any fish in the U.S. yet, but it says its salmon may first turn up in places like restaurants or university cafeterias, which would decide whether to tell diners that the fish are genetically modified.

“It’s their customer, not ours,” said Sylvia Wulf, AquaBounty’s CEO.

To produce its fish, AquaBounty injected Atlantic salmon with DNA from other fish species that make them grow to full size in about 18 months, which could be about twice as fast as regular salmon. The company says that’s more efficient since less feed is required. The eggs were shipped to the U.S. from the company’s Canadian location last month after clearing final regulatory hurdles.

As AquaBounty worked through years of government approvals, several grocers including Kroger and Whole Foods responded to a campaign by consumer groups with a vow to not sell the fish.

This month, President Donald Trump signed an executive order directing federal agencies to simplify regulations for genetically engineered plants and animals. The move comes as companies are turning to a newer gene-editing technology that makes it easier to tinker with plant and animal DNA.

That’s blurring the lines around what should be considered a genetically modified organism, and how such foods are perceived. In 2015, an Associated Press-GfK poll found two-thirds of Americans supported labeling of genetically modified ingredients on food packages. The following year, Congress directed regulators to establish national standards for disclosing the presence of bioengineered foods. 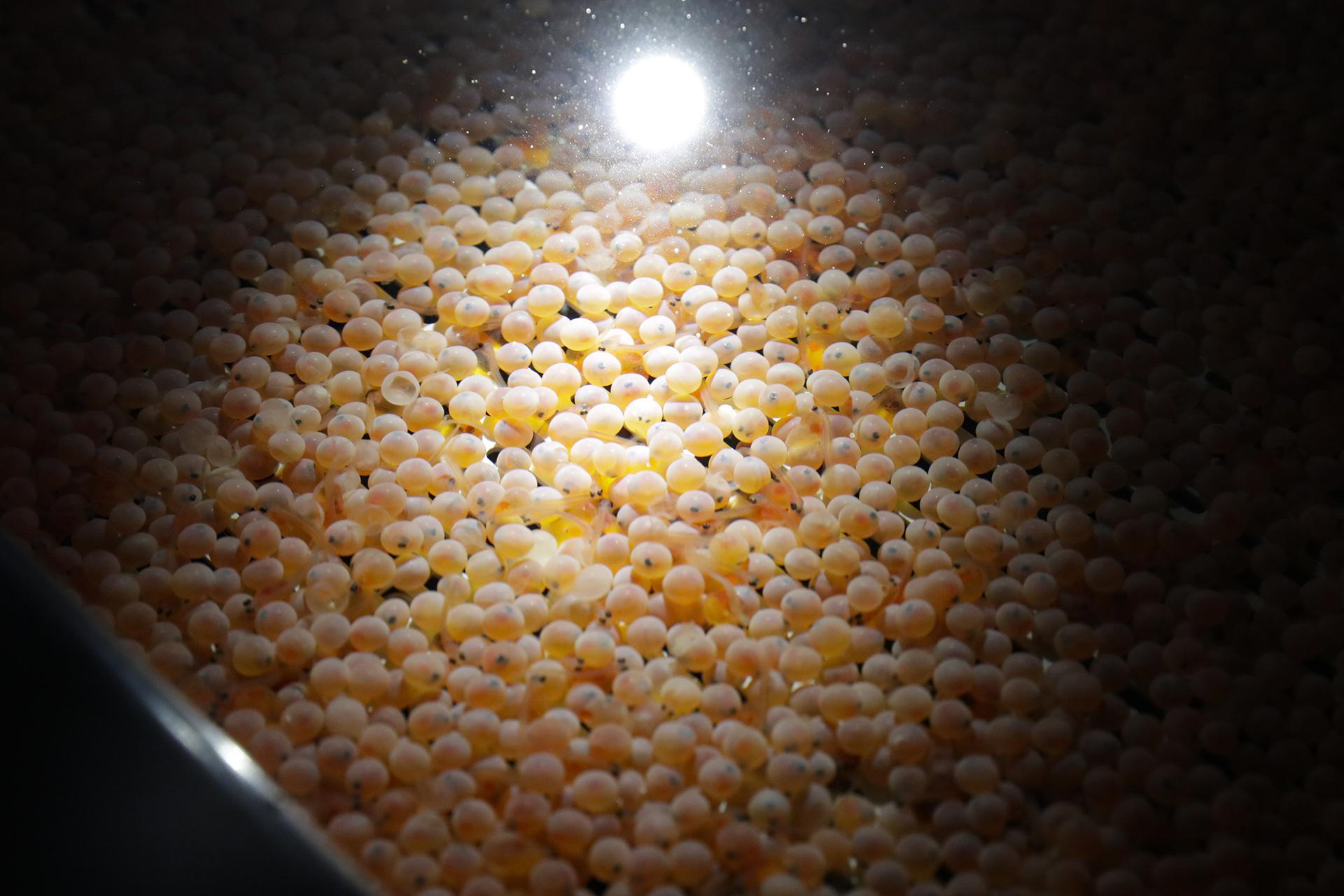 The first batch of bioengineered Atlantic salmon eggs are shown in an incubation tray at AquaBounty Technologies' facility in Albany, Indiana on Wednesday, June 19, 2019. The company, which already breeds the salmon in Canada, is incubating this first batch of bioengineered eggs and the first salmon fillets raised there would be ready in late 2020. (AP Photo / Michael Conroy)

But foods made with the newer gene-editing technique wouldn’t necessarily be subject to the regulation, since companies say the resulting plants and animals could theoretically be produced with conventional breeding. And while AquaBounty’s salmon was produced with an older technique, it may not always be obvious when people are buying the fish either.

The disclosure regulation will start being implemented next year, but mandatory compliance doesn’t start until 2022. And under the rules, companies can provide the disclosures through codes people scan with their phones. The disclosure also would note that products have “bioengineered” ingredients, which advocacy groups say could be confusing.

“Nobody uses that term,” said Amy van Saun of the Center for Food Safety, who noted “genetically engineered” or “genetically modified” are more common.

The center is suing over the U.S. Food and Drug Administration’s approval of AquaBounty’s salmon, and it is among the groups that asked grocers to pledge they wouldn’t sell the fish.

The disclosure rules also do not apply to restaurants and similar food service establishments. Greg Jaffe of the Center for Science in the Public Interest noted that AquaBounty’s fish will represent a tiny fraction of the U.S. salmon supply, and that many people may not care whether they’re eating genetically modified food. Still, he said restaurants could make the information available to customers who ask about it.

“The information should not be hidden,” Jaffe said.

AquaBounty’s Wulf noted its salmon has already been sold in Canada, where disclosure is not required. She said the company believes in transparency but questioned why people would want to know whether the fish are genetically modified.

“It’s identical to Atlantic salmon, with the exception of one gene,” she said.

‘Sell By’ or What? US Pushes for Clarity on Expiration Dates