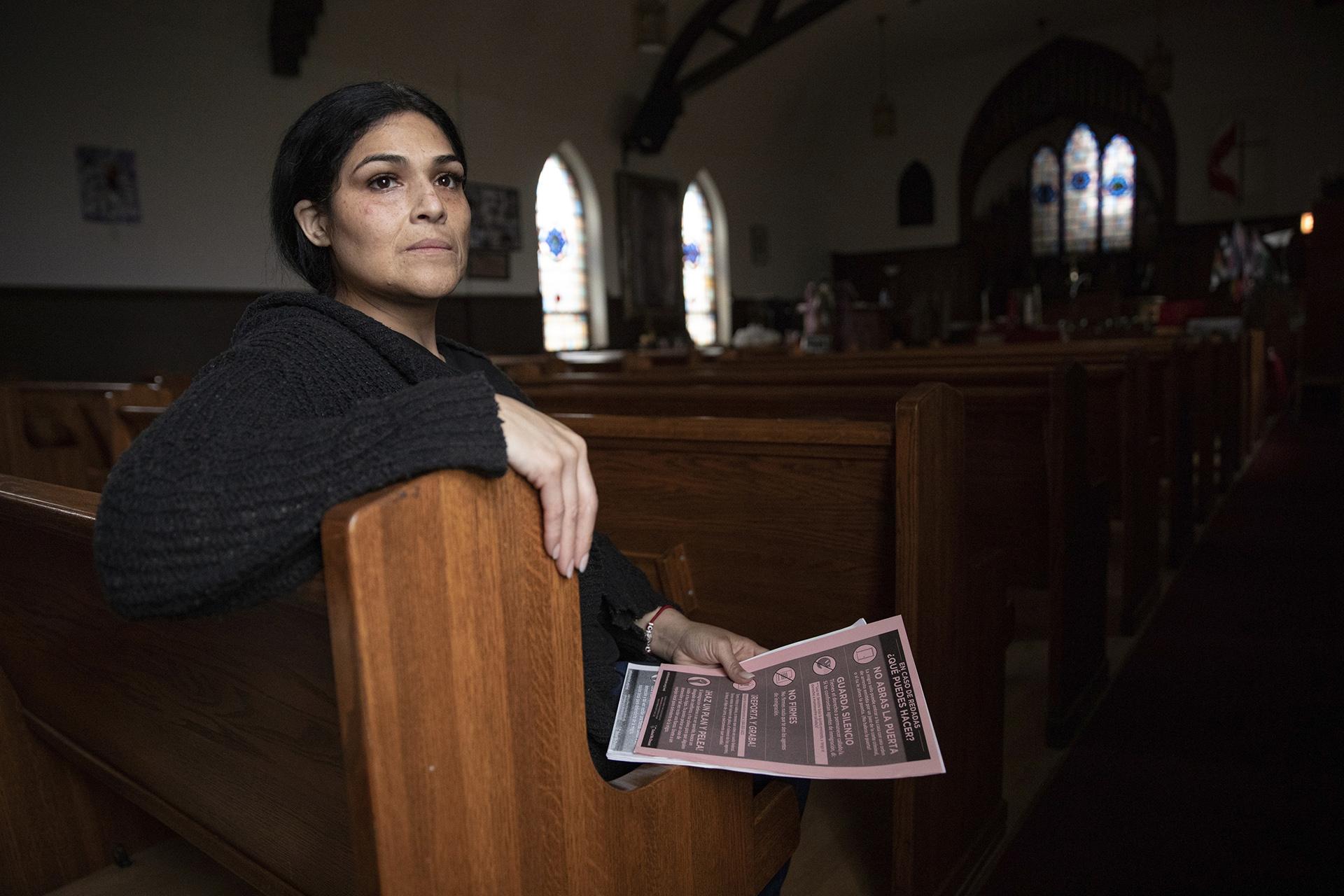 In this Wednesday, June 19, 2019 photo, Cecilia Garcia, member of La Familia Latina Unida and founder of Family Reunification not Deportation, poses for a portrait after an emergency meeting plan of action on how to defend and protect undocumented communities of deportation ahead of President Donald J. Trump’s announcement on immigration at Lincoln Methodist Church in Chicago's Pilsen neighborhood. (AP Photo / Amr Alfiky)

CHICAGO (AP) — Ceci Garcia believes that if her husband had a better understanding of his rights, he would have avoided deportation to Mexico after telling a suburban Chicago police officer during a 2012 traffic stop that he was living in the U.S. illegally.

“He failed to remain silent,” said the U.S. citizen mother of five. “He proceeded and told the truth.”

The Chicago woman now spends her time teaching others how to avoid her husband’s fate, part of a growing national effort since President Donald Trump took office that took on new urgency in recent days. As he kicked off his 2020 campaign, Trump had proclaimed that his administration would launch a new operation in the coming days to deport millions living in the country illegally. On Saturday, he tweeted that he had delayed the plan two weeks in hopes that Democrats and Republicans could work out solutions to “Asylum and Loophole problems at the Southern Border.”

From Los Angeles to Atlanta, advocates and attorneys have brought “know-your-rights” workshops to schools, churches, storefronts and consulates, tailoring their efforts on what to do if Immigration and Customs Enforcement shows up at home or on the road. They’ve role-played interactions, handed out pocket guides, provided hotlines, hosted webinars and offered scripts. The result, advocates argue, is more savvy immigrants who are increasingly refusing to open their doors or provide information, something they hope will blunt any impact of any operation.

“It’s more about making sure that people feel like they have some power over what is happening in their lives,” said Katarina Ramos, a National Immigrant Justice Center staff attorney. “And that they have some control over what is inherently a very scary situation.”

Whether it’s the American Civil Liberties Union or a neighborhood nonprofit, the trainings focus on the same ideas: the right to remain silent; refusing officers entry into a home; not signing anything without legal representation; and asking for paperwork from agents. They are rights attorneys say apply to everyone regardless of citizenship status.

Opening the door to an agent is an invitation that could lead to collateral arrests, so activists suggest talking through a door or a window, something the Coalition for Humane Immigrant Rights Los Angeles depicts in an animated know-your-rights video. A booklet by political organization Mijente advises immigrants not to carry identification with country of origin to avoid having evidence that could end up in immigration court. The Chicago-based Resurrection Project tells immigrants to film interactions. If the agent asks to drop the phone, activists tell trainees to comply but not turn off the recorder.

A glossy blue and white flyer script distributed by the group tells the person to ask for “a judicial warrant signed by a judge” to gain entry into the home and shows a picture of one next to an administrative warrant, which is signed only by ICE. 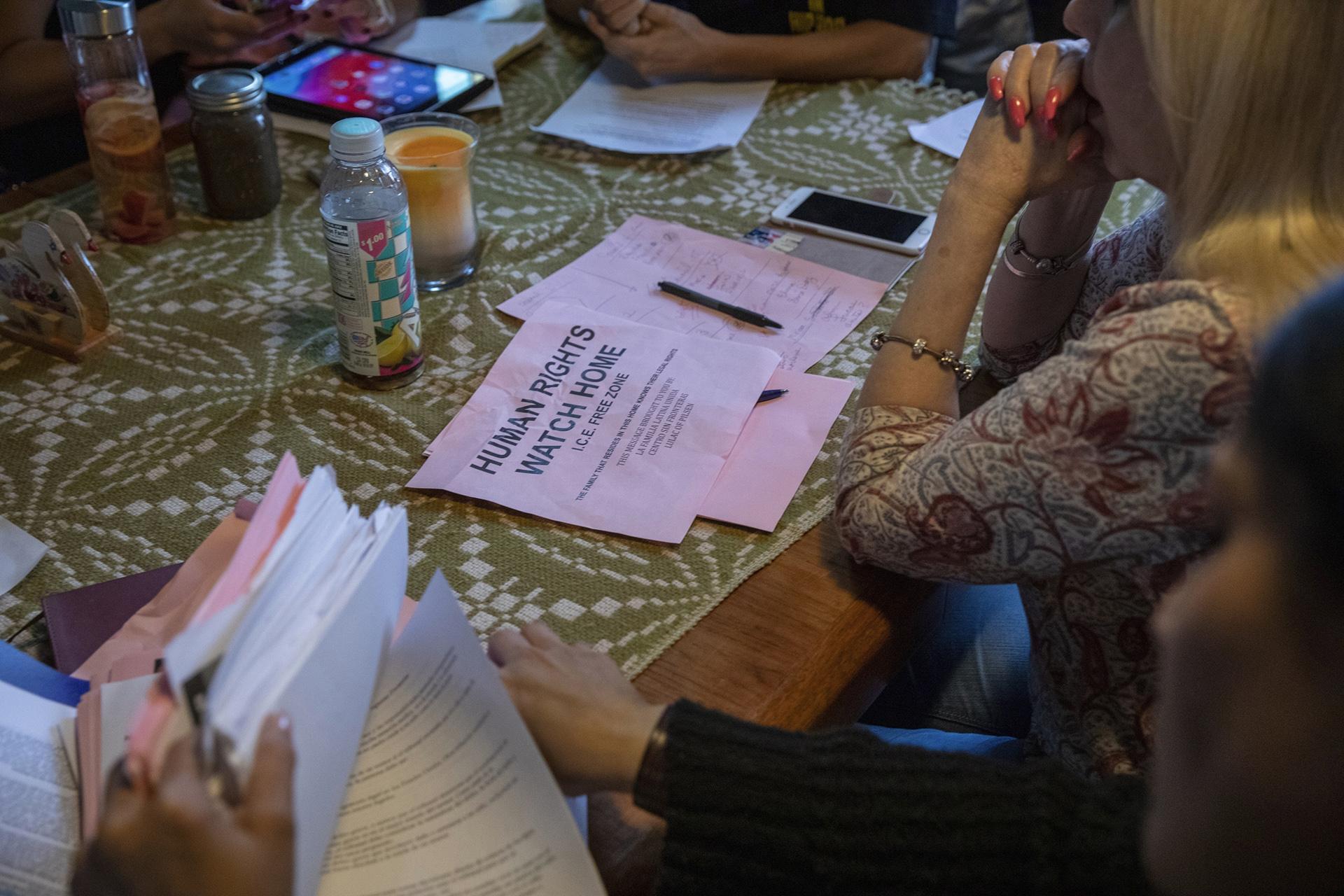 In this Wednesday, June 19, 2019 photo, a flyer that reads “Human Rights Watch Home, ICE Free Zone “ rests on a table during an emergency meeting plan of action on how to defend and protect undocumented communities of deportation at Lincoln Methodist Church in Chicago's Pilsen neighborhood. (AP Photo / Amr Alfiky)

As concerns rose about Trump’s initial announcement, advocates ratcheted up their actions.

The American Business Immigration Coalition hosted a Thursday webinar and told the businesses on the call — hotel managers, restaurateurs and dairy farmers — to not immediately turn over employment records in case of a raid. The head of the Immigrants’ Assistance Center in the Massachusetts fishing city of New Bedford said she would speak in the coming days about contingency plans for children’s care to church congregations and on local Spanish and Portuguese language TV and radio stations. Chicago activists vowed more public demonstrations.

ICE’s new acting director Mark Morgan had said the operation would be nationwide and continue for weeks and no one would be exempt from deportations, including families. Morgan said there had been 2,000 letters sent to families telling them they had been ordered removed and he implored people to come in so they didn't have to go out and find them.

National Immigrant Justice Center organizers suggested authorizing someone outside the family to pick up children from day care ahead of time and not only having an emergency contact, but memorizing the phone number in case a cellphone is confiscated. The Resurrection Project has walked families through asset protection, like how to manage a bank account if the head of household is detained.

While activists argue their efforts are successful, it’s difficult to gauge. Chicago advocates say their reach has been deep; a city legal fund established after Trump took office helped pay for more than 460 trainings from January 2017 until October 2018, involving approximately 40,000 people. The National Partnership for New Americans, with affiliated organizations in 31 states, boasts of 150 attorneys and legal staff nationally.

In May, a New York activist used tactics he learned in training to keep immigration enforcement officers from taking two people with him into custody, something he filmed and posted online. Ceci Garcia said that a person she trained — who did not speak English — called and put her on speaker phone through a window when an ICE agent showed up and was deterred.

Julieta Bolivar, 50, wished she had the training when she was taken into ICE custody in 2002 during a traffic stop and signed papers agreeing to voluntary departure.

Orphaned as a young girl in Bolivia, she was brought to the U.S. by a godmother on a visitor visa and overstayed. She worked cash jobs to support her three American-born children. She eventually became a legal resident after making her case to a judge, but being arrested in front of her children still haunts her.

She uses her story while conducting trainings in Chicago for The Resurrection Project. Among her top lessons: Talk to children and make sure they know the plan.