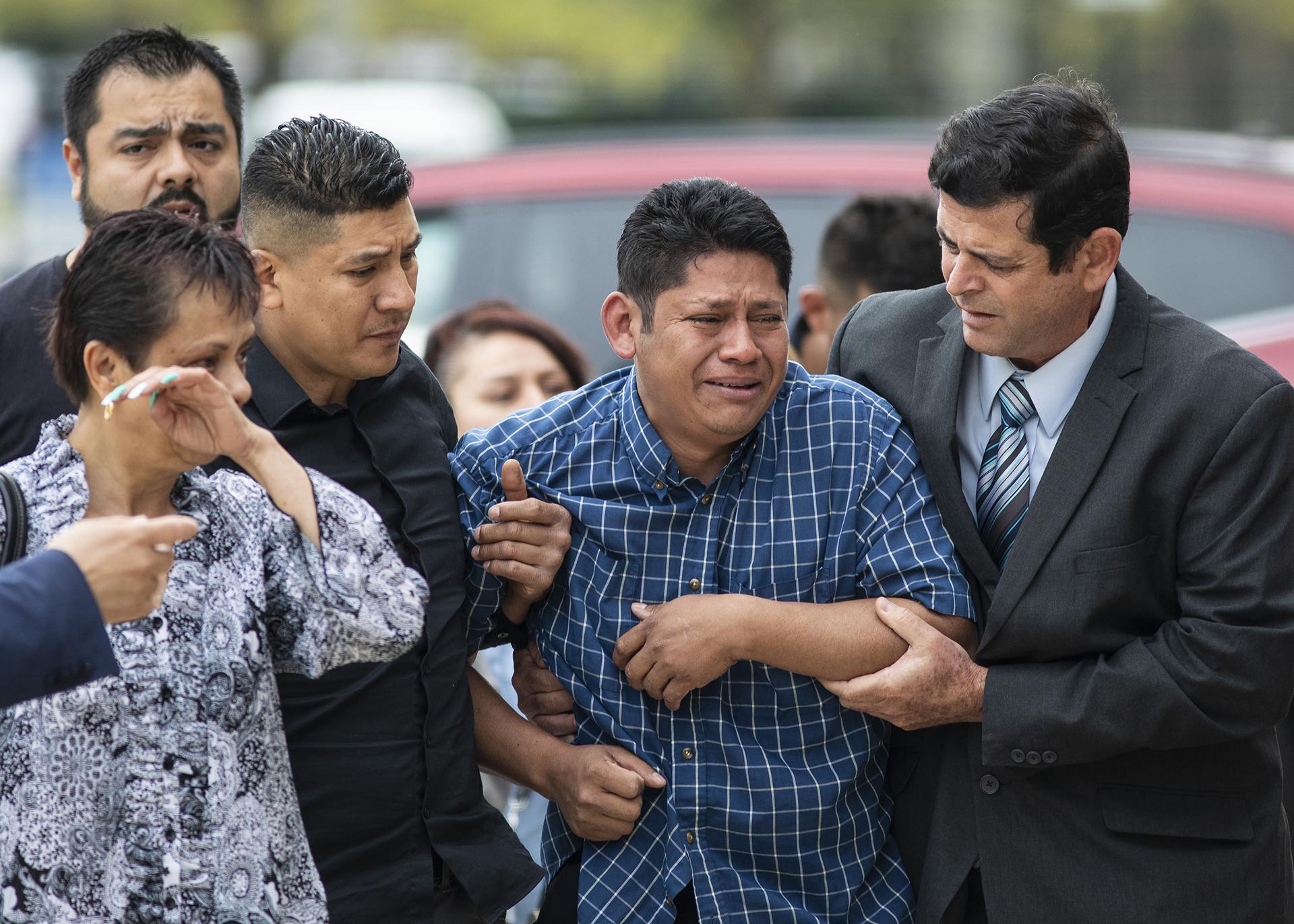 Arnulfo Ochoa, the father of Marlen Ochoa-Lopez, is surrounded by family members and supporters, as he walks into the Cook County medical examiner’s office to identify his daughter’s body, Thursday, May 16, 2019 in Chicago. (Ashlee Rezin / Chicago Sun-Times via AP)

CHICAGO (AP) — A pregnant woman who had gone to a Chicago home in response to a Facebook offer of free baby clothes was strangled and her baby cut from her womb, police and family members said.

The newborn was in grave condition and not expected to survive, and three people were taken into custody, including a woman who pretended the baby was hers, police said. Charges including murder were expected to be filed Thursday afternoon, police spokesman Anthony Guglielmi said.

The body of 19-year-old Marlen Ochoa-Lopez was found early Wednesday behind the house, more than three weeks after she disappeared. The nine-months-pregnant woman was last seen leaving her high school on April 23, the same day paramedics were called to the home several miles away on the Southwest Side about a newborn with problems breathing.

“We believe that she was murdered, and we believe that the baby was forcibly removed following that murder,” Guglielmi said, calling it an “unspeakable act of violence.”

Chicago Fire Department spokesman Larry Merritt said a 46-year-old woman called 911 reporting that her newborn baby was in distress. When paramedics arrived “the baby wasn’t breathing, the baby was blue,” said Merritt. Paramedics tried to resuscitate the baby on the way to the hospital, he said.

The family of Ochoa-Lopez, a married mother of a 3-year-old son, said a woman on Facebook had lured her to the home by offering a stroller and baby clothes.

“She was giving clothes away, supposedly under the pretense that her daughters had been given clothes and they had all these extra boy clothes,” said Cecelia Garcia, a spokeswoman for the family.

Ochoa-Lopez’s family has been looking for her since her disappearance, organizing search parties, holding news conferences and pushing police for updates on the investigation.

A break in the investigation came after the woman who said she had given birth to the baby set up an online fundraising campaign, another spokeswoman for Ochoa-Lopez’s family said. The GoFundMe campaign said that the baby was about to die and money was needed for a funeral, Sara Walker said.

Police then conducted DNA tests to determine that Ochoa-Lopez and her husband, Yiovanni Lopez, were actually his parents, Walker said.

“Even though we found her without a life, at least we’re grateful that we found her. And we want justice — that’s what we want,” Ochoa-Lopez’s father, Arnulfo Ochoa, said Thursday as he stood with other relatives outside the county’s medical examiner’s office, where his daughter’s body was taken.

Lopez told reporters that he understood his son was likely to die soon, but that he still wasn’t giving up hope.

“We plead to God that he gives us our child because that is a blessing that my wife left for us,” he said in Spanish through an interpreter.