A trio of current and former Chicago police officers have been acquitted of charges that they conspired to hide details of the Laquan McDonald shooting in an unprecedented trial that put a spotlight on the police department’s so-called code of silence.

A Cook County judge on Thursday found Chicago Officer Thomas Gaffney, former officer Joseph Walsh and ex-Detective David March not guilty of conspiracy, official misconduct and obstruction of justice. They were accused of falsifying official reports from the scene of the 2014 shooting in order to “conceal the true facts” of McDonald’s death in an attempt to shield fellow Officer Jason Van Dyke from prosecution.

During an hourlong statement, Cook County Associate Judge Domenica Stephenson dismissed each and every one of the state’s allegations against the men, saying special prosecutors failed to prove beyond a reasonable doubt that any conspiracy existed or that the men had lied in any official capacity.

Prosecutors had leaned on dashcam video of the shooting to show how it differed from official police reports from the scene. But Stephenson said the case couldn’t be boiled down simply to video versus reports, because the video didn’t show the same perspective that officers on the scene had.

“Two people with two different vantage points can witness the same event but describe it differently,” she said. “This does not necessarily mean that one of them is lying.”

Video: Stephenson reads a prepared statement and announces her verdict.

Because this was a bench trial, it was Stephenson rather than a jury who determined the verdict.

March and Gaffney left the courthouse without speaking to media. Walsh made only a brief statement, saying the trial had been "heart-wrenching, heartbreaking" for his family over the past year and a half.

While the defendants said little, their attorneys described the "courage" it took Stephenson to rule the way she did.

“The judge listened to the evidence in this case, unlike a lot of the media did not,” Walsh’s attorney Todd Pugh said after the verdict. “And it was clear from a written ruling … that she heard every word of the testimony in this trial and she concluded, as we did a year before, that there never was a case here.” 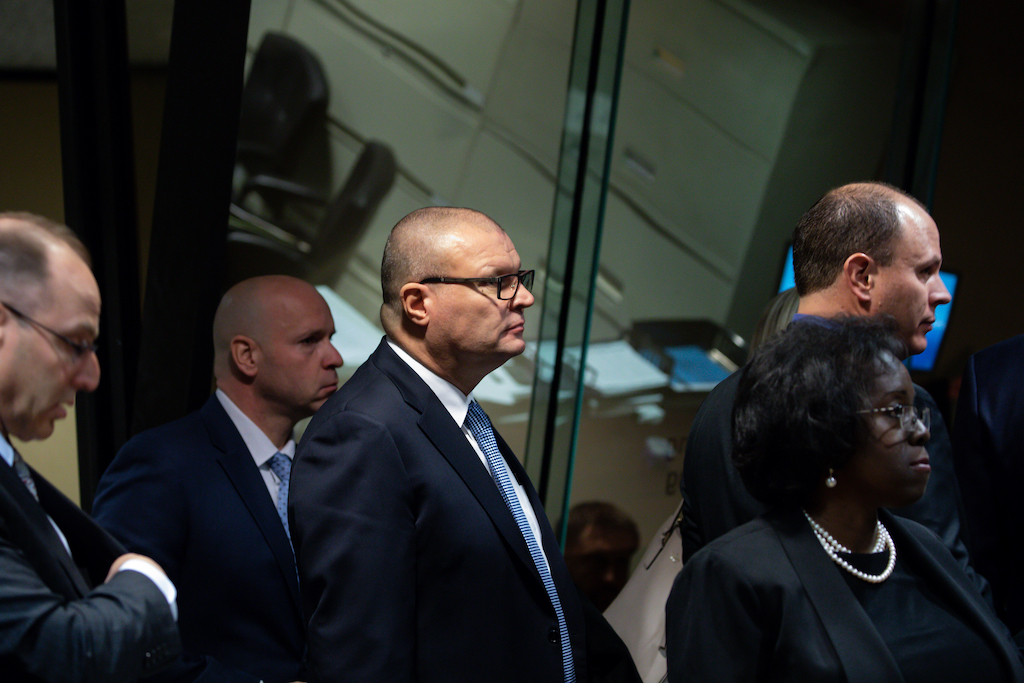 Special prosecutors pointed to “virtually identical false information” in the men’s reports from the scene of the 2014 shooting. They said the men created a false narrative – making it appear in reports as though McDonald, 17, used a knife to attack and batter Van Dyke, Walsh and Gaffney – in order to make the shooting appear justified. Dashcam video of the shooting released more than a year later shows the teen did not attack officers immediately before he was shot.

Special prosecutors claimed there’s no innocent way to explain away those identical false reports. They also accused March of lying when he allegedly told a medical examiner’s investigator that McDonald had “lunged” at Van Dyke and Walsh.

But defense attorneys for the men said there’s no proof of any agreement between the officers to cover for Van Dyke. They chalked up similarities in the reports to possible mistakes rather than proof of a conspiracy.

///BREAKING/// Three Chicago police officers have been found NOT GUILTY of conspiracy, official misconduct and obstruction of justice stemming from 2014 shooting of Laquan McDonald

State witnesses included an eyewitness to the shooting who alleged he was waved away from the scene without being interviewed and Chicago police officer Dora Fontaine, who testified that March had instructed her to include false information in her official report. A retired Chicago police detective who was working with Area Central detectives on the night of the shooting was the lone defense witness, as all three defendants refused to take the witness stand.

Stephenson agreed with the defense. She felt Fontaine’s testimony was “not credible” and repeatedly said that state evidence failed to prove beyond any reasonable doubt that the defendants had conspired to do anything.

Even if March did say McDonald “lunged,” Stephenson said that does not prove any agreement between the defendants to commit a conspiracy. If March was trying to push things in that direction, Stephenson said, the word “lunged” would have appeared in other reports. But it did not.

Special Prosecutor Patricia Brown Holmes said that while she disagreed with that assessment, she respected the judge's finding. She told reporters she followed where the evidence took her in this case, and hopes that even an acquittal will put a "crack in the wall of the code of silence."

"I can't think of one thing we could have or should have done differently," she said.

This case in many ways mirrored Van Dyke’s own trial.

Prosecutors in both trials argued McDonald was trying to flee police, rather than attack them, when he was shot. They relied on the dashcam video and other surveillence footage to show the teen’s actions in the moments before the fatal encounter. Defense attorneys instead claimed Van Dyke was justified in pulling the trigger as McDonald posed a potentially lethal threat to officers on the scene.

Van Dyke was found guilty of second-degree murder and 16 counts of aggravated battery last fall. He is scheduled to be sentenced Friday.

Video: Reaction to the verdict.

Several activists called for action in the wake of the verdict. McDonald’s great uncle, the Rev. Marvin Hunter, was outraged by the verdict, saying afterward that he believed Stephenson had long ago made up her mind to acquit the officers.

"This is not justice," he said.

Hunter said the verdict was akin to saying Van Dyke too was not guilty of murder. He and others also expressed fear the decision could impact Van Dyke’s sentencing Friday.