Special prosecutors and defense attorneys for Chicago police Officer Jason Van Dyke each had one last chance to convince jurors of their case Thursday as a verdict in the high-profile murder case draws closer.

Closing arguments followed nearly three weeks of witness testimony from police officers, medical and law enforcement experts, and Van Dyke himself. Once those finished, the 12-person jury began their deliberations.

RELATED: As Jury Deliberates Van Dyke’s Fate, a Closer Look at the Charges

The white officer is charged with first-degree murder after shooting black teenager Laquan McDonald 16 times during a police call in October 2014. He also faces 16 counts of aggravated battery and one count of official misconduct. 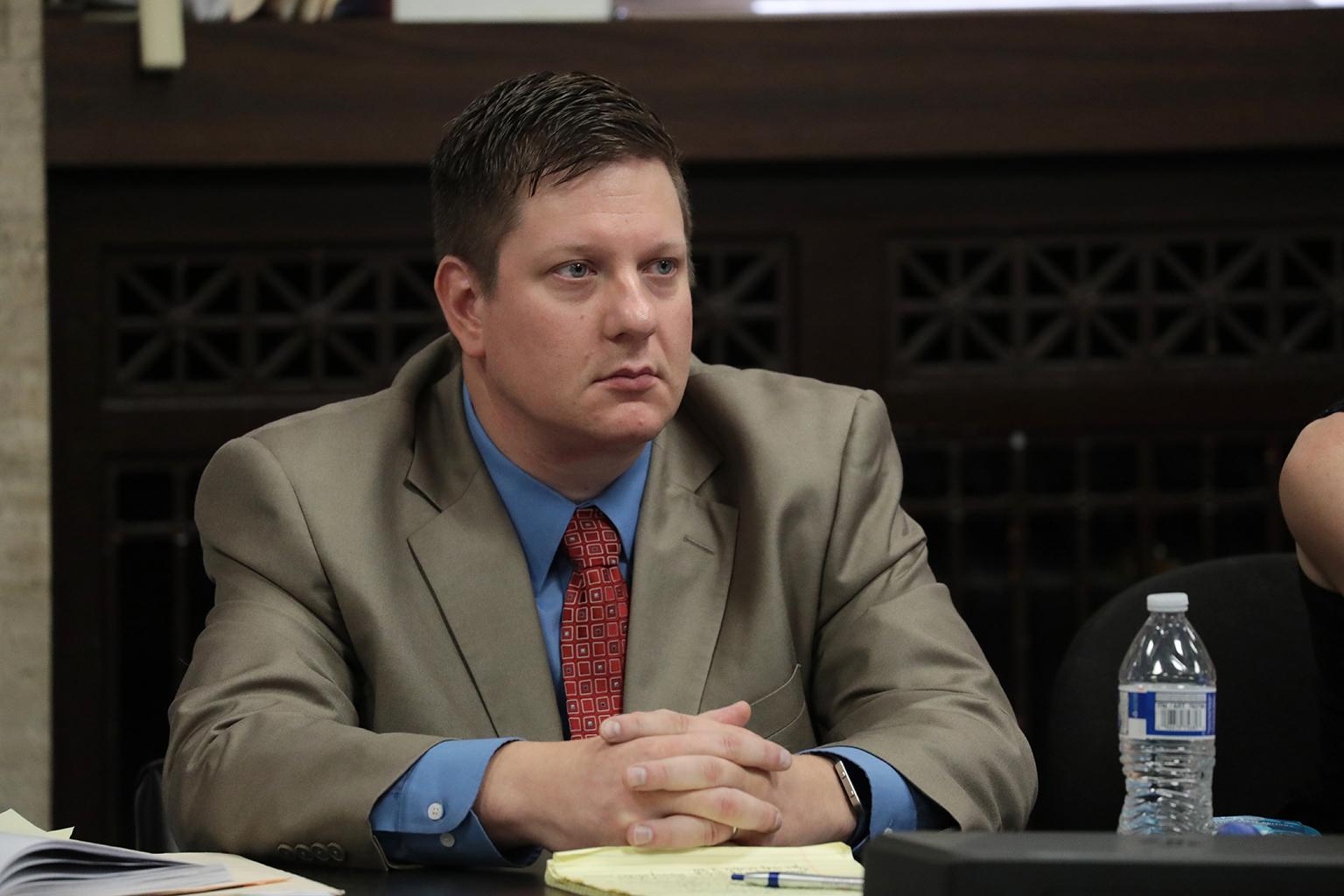 On the witness stand this week, Van Dyke testified he started shooting only after McDonald raised a knife at him, and continued firing when McDonald tried to get up off the ground with a knife still in hand.

Prosecutors have pointed to statements Van Dyke made to his partner on the night of the shooting while en route to McDonald’s position, saying “Oh my God, we’re going to have to shoot the guy.”

They’ve also said Van Dyke’s account doesn’t match up with the infamous dashcam footage of the shooting. The release of that video in 2015 – more than a year after the shooting – sparked days of protests in the city. Chicago police and some city officials are bracing for similar action in the event Van Dyke is acquitted, though protests during the trial itself have been relatively sparse.

Below, updates from the courtroom. Get complete coverage of the trial here.

After Judge Vincent Gaughan wrapped up lengthy instructions, the 12-person jury was led away to begin their deliberations.

All decisions must be reached unanimously.

The five alternate jurors who have heard the case were informed of their status. They were taken away from the rest of the jurors and informed by Gaughan not to speak with anyone about the case. 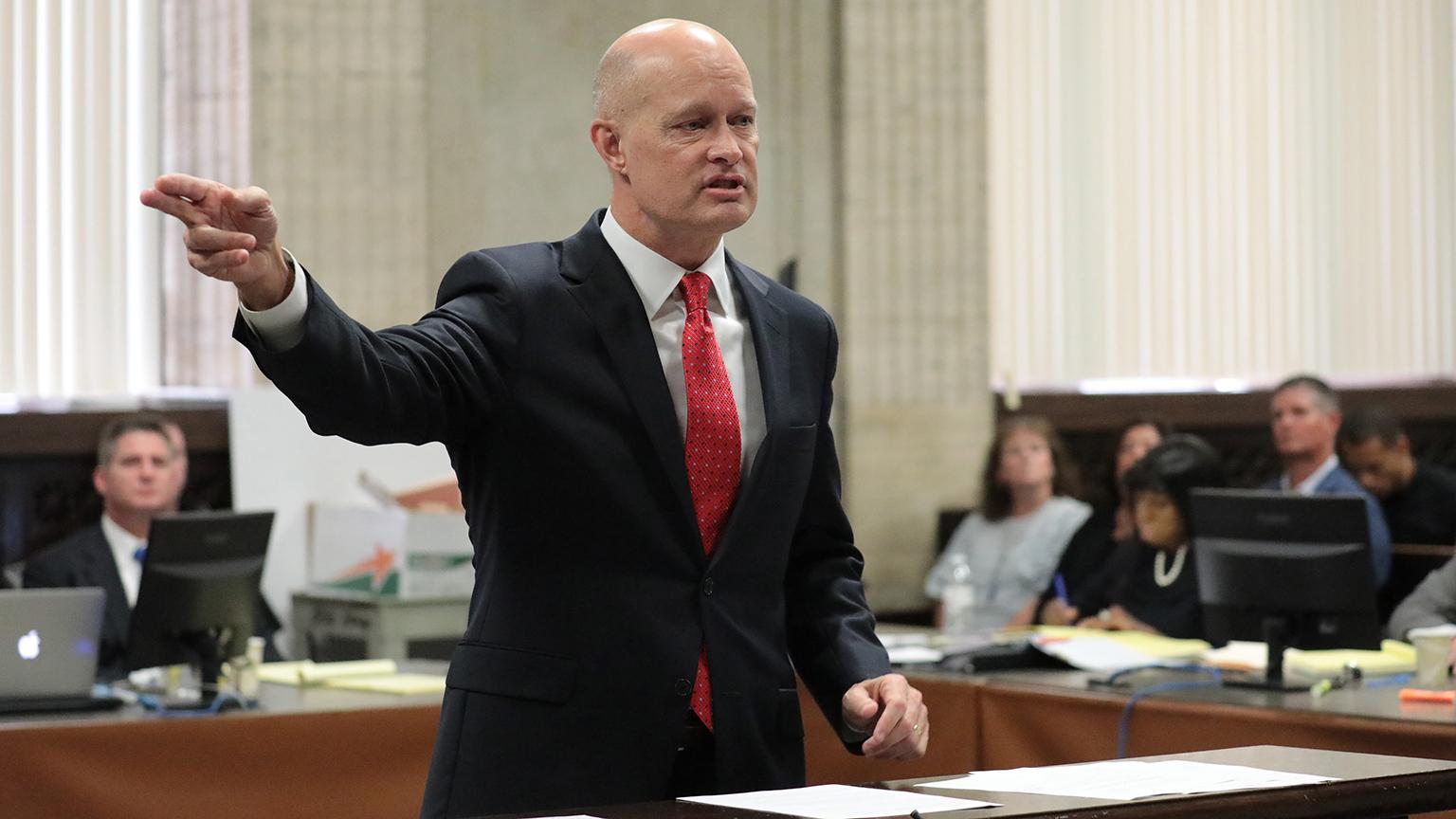 “We’re here,” special prosecutor Joseph McMahon said, “because Jason Van Dyke didn’t value the life of Laquan McDonald enough to do anything but shoot him.”

In the second half of the prosecution’s closing arguments, McMahon said McDonald demonstrated a pattern of avoidance on the night of his death and was attempting only to get away from police officers, not attack them with a knife before being shot.

“Someone needed to arrest Laquan McDonald, not stop him with a hail of gunfire,” McMahon said. “That’s not self-defense. That is not fear for personal safety.”

He reiterated special prosecutor Jody Gleason’s earlier statements that the defense has exaggerated the threat McDonald posed that night, saying Chicago police Officer Joseph McElligott, who trailed McDonald for a few blocks on foot before the shooting, exercised patience in what was likely a more dangerous situation by not firing his gun.

“He doesn’t shoot,” McMahon said, “because it wasn’t necessary.”

After closing arguments concluded, Gaughan began reading jurors a lengthy list of instructions for their deliberations. 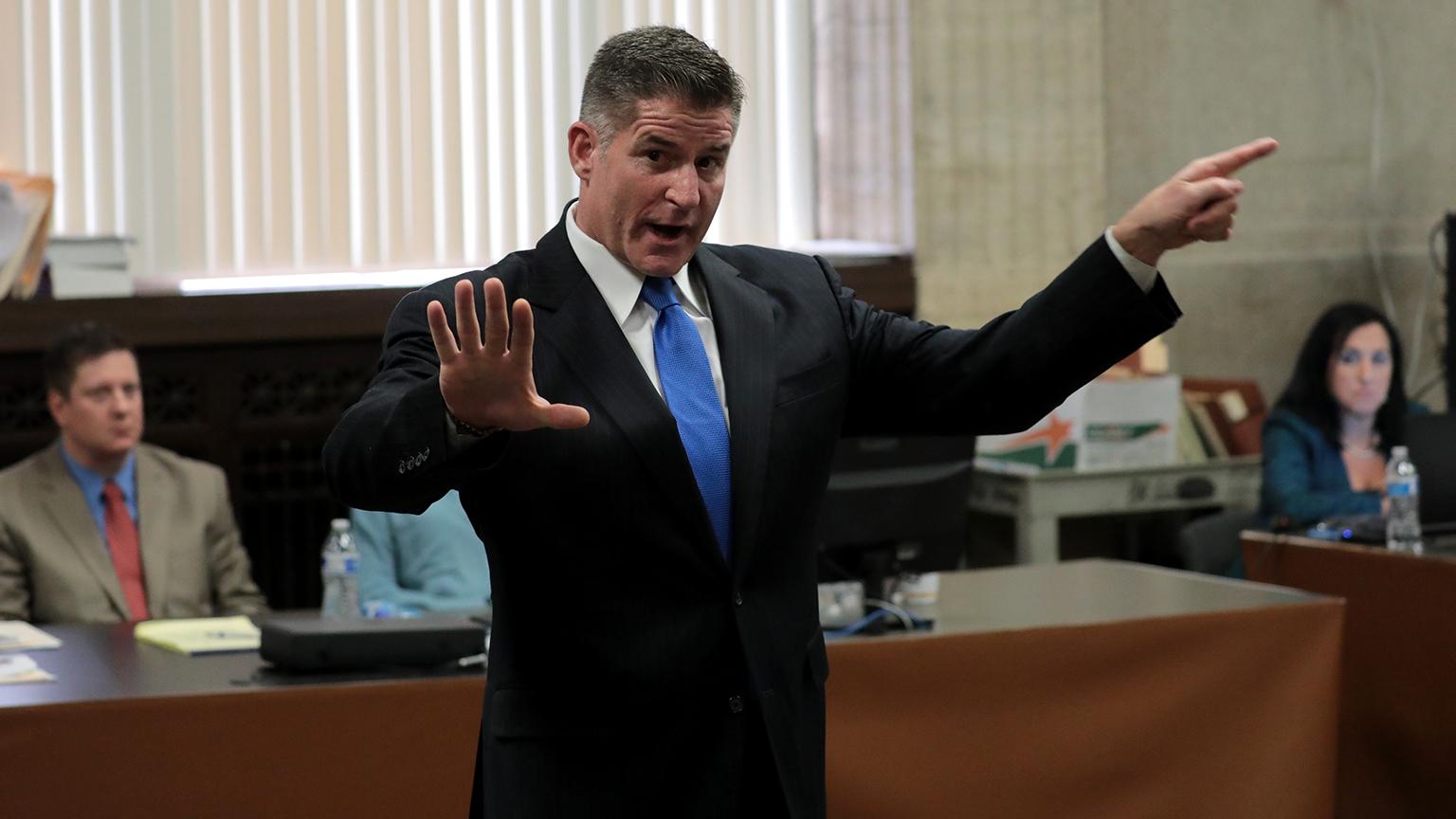 Walsh, who stood beside Van Dyke during the shooting and was one of the prosecution’s first witnesses called, testified he too would have shot at McDonald if he believed the teen posed a lethal threat.

In his arguments, Herbert painted Van Dyke as the “last line of defense” against a violent teen who was carrying a knife while “whacked out on PCP.” He also told jurors that if they review the evidence fairly and impartially, there’s only one decision they can make: “not guilty.”

Defense attorney Daniel Herbert called the first-degree murder charge against Van Dyke “unprecedented” and told jurors that they need to examine the shooting through the eyes of his client.

“We have to look at this from Jason Van Dyke’s perspective. Probable guilt is not enough. The video is not enough,” he said during closing arguments.

Herbert claimed McDonald raised the threat level at every turn the night he was killed, refusing to drop his knife and actually using it to attack truck driver Rudy Barillas before the shooting.

Herbert has repeatedly said that in using the dashcam video, prosecutors are trying to show jurors the “last two minutes of a movie” without first explaining the context of the situation. He also called the shooting a tragedy, but said it was a preventable one. 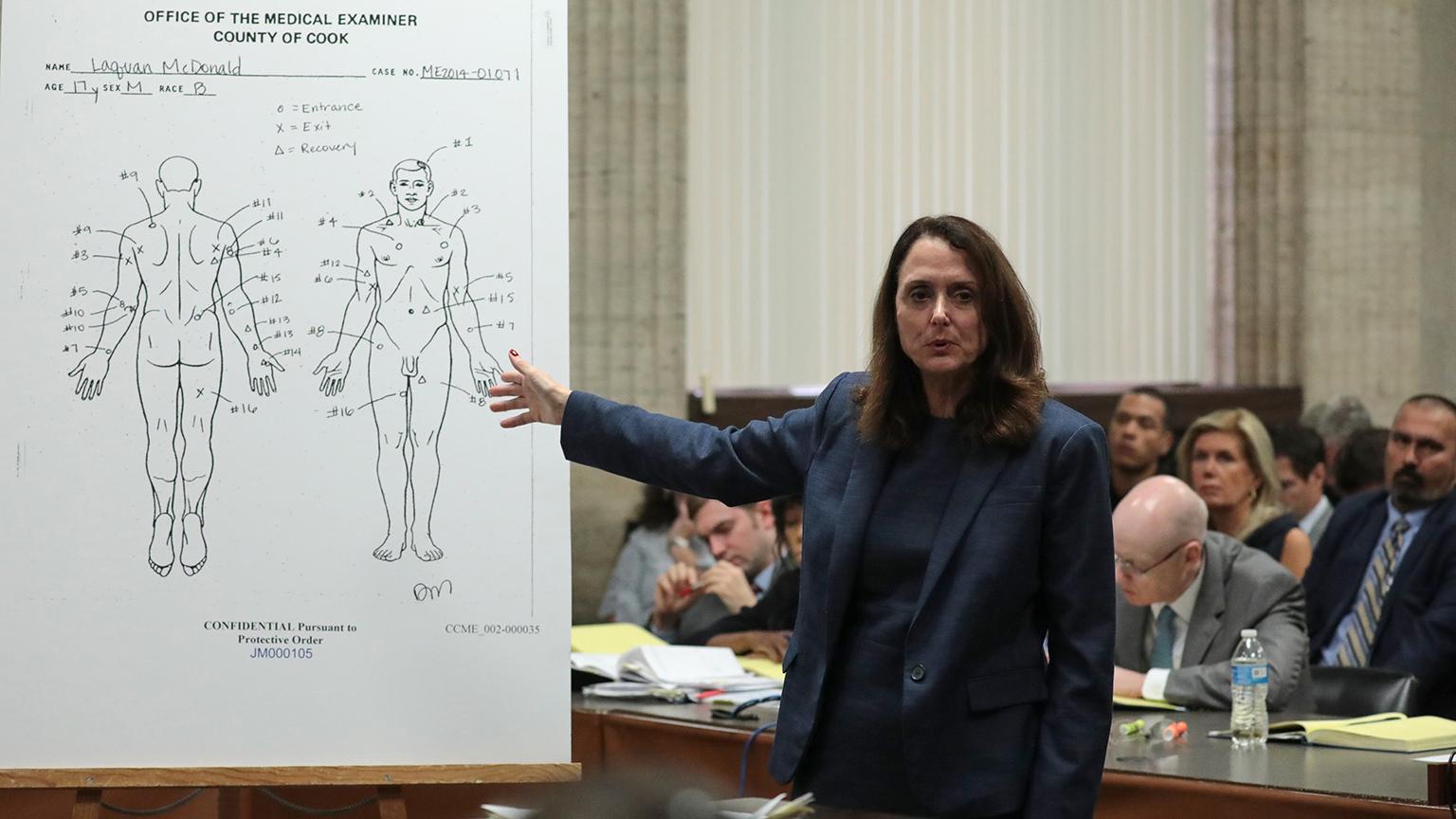 Special prosecutor Jody Gleason repeatedly told the jury during her closing arguments that the defense has “exaggerated the threat” McDonald posed to officers the night he was killed.

“An officer can tell you to do something, an officer can even arrest you for certain situations; however, they do not have the right to use deadly force just because you will not bow to their authority,” she said.

Gleason said McDonald was never walking home on the night of the shooting, because Van Dyke “decided that on his way to the scene.”

Jurors again viewed the dashcam video of the shooting and autopsy photos of McDonald’s gunshot wounds. Gleason also hammered on inconsistencies between Van Dyke’s testimony and that video, which shows only a brief encounter before the shots began.

“He looked at Laquan McDonald for six seconds – six seconds – before he made the irrevocable decision to shoot him, not once, but 16 times,” she said.

A first-degree murder conviction means Van Dyke intended to kill or do great bodily harm to McDonald when he shot him 16 times.

If jurors convict Van Dyke on a second-degree murder charge that means they found Van Dyke believed he was acting reasonably in shooting and killing McDonald, but that belief was unreasonable.

If Van Dyke is convicted of first-degree murder, he faces a possible life sentence. But a second-degree murder conviction carries with it a sentence of 4-20 years.

That means Van Dyke could actually be convicted of a lesser murder charge and receive a lighter sentence than he faces for any of the 16 counts of aggravated battery with a firearm charges – a Class X felony that carries a six-year minimum sentence.