Gov. Bruce Rauner refrained Monday from matching the rhetoric of his weekend tweet calling Saturday’s anti-violence march “chaos,” but he insists that it was dangerous.

Rauner declined to say whether he’ll sign into law three pieces of legislation passed this spring that gun-control critics say will cut down on shootings: Senate Bill 3256 requires a 72-hour waiting period for the purchase of all guns; House Bill 2354 creates a path for relatives and police to petition the courts to temporarily remove a gun from someone believed dangerous; and Senate Bill 337 requires gun shops to be state-certified.

Rather, he accuses Democrats who control the legislature of “stunning failure” on gun safety, for failing to take up his plan, which would ban bump stocks and bring back the death penalty for “mass murderers” and those convicted all doubt of killing police.

The governor’s solution to violence touches on a common theme: reducing burdens on businesses and lowering property taxes, which he says will grow economic opportunities and jobs. 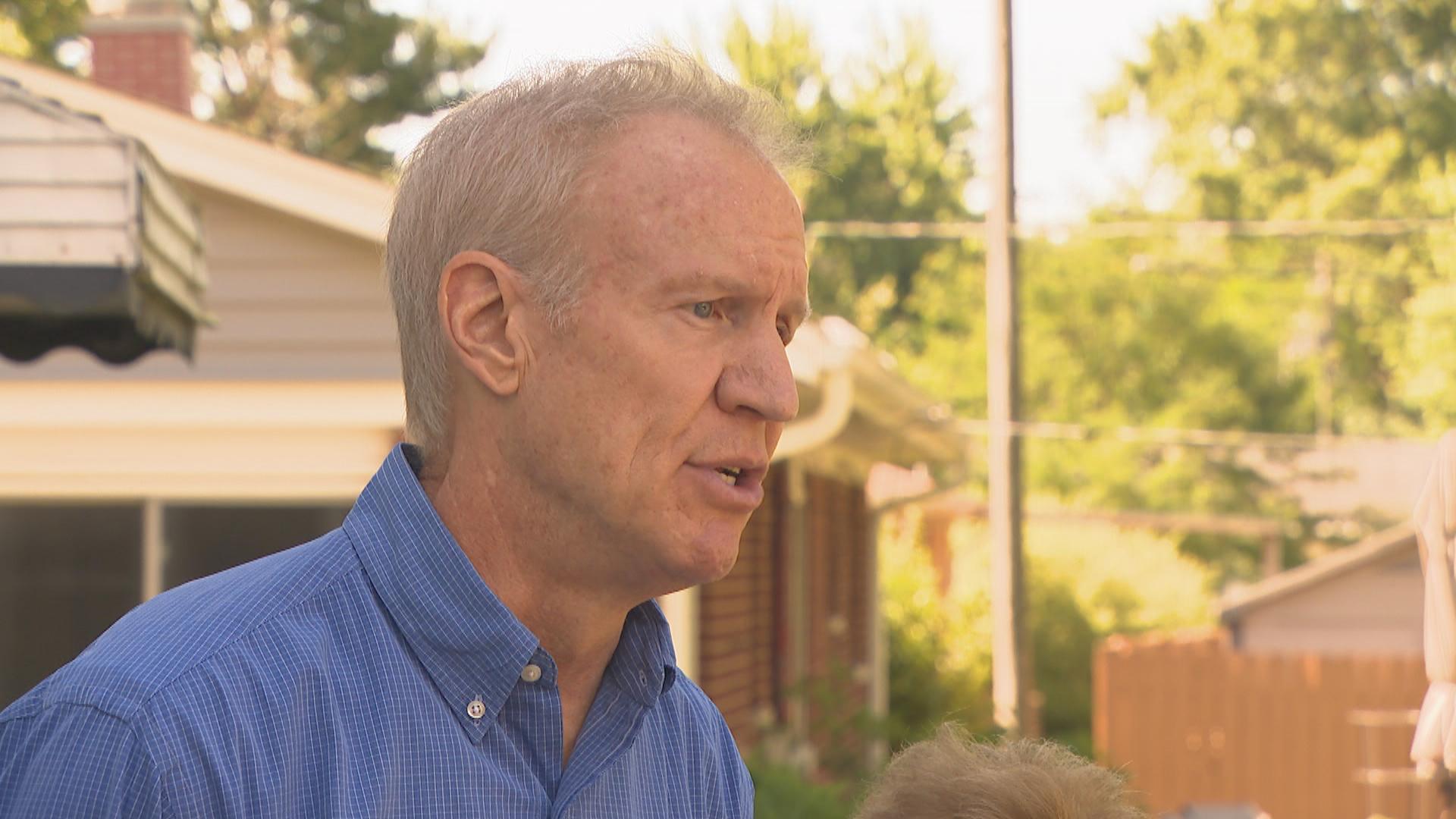 Rauner accused J.B. Pritzker, his Democratic rival for the governor’s office, of being part of a “rigged” property tax appeals system, accusing the Pritzker Group of hiring the firm owned by House Speaker Michael Madigan to appeal property taxes for a manufacturing plant.

Pritkzer spokeswoman Jordan Abudayyeh called it a “desperate and hypocritical attack from a failed governor who appealed his own property assessments 22 times. Bruce Rauner proposed a budget that would’ve sent property taxes skyrocketing and instead of focusing on solutions he’s busy trying to distract from his record of failure.”

Rauner’s campaign staged an event at the Des Plaines home of 79-year-old Mary Ann Szady to underscore his point.

“My property tax has gone up probably 50-percent since the late ‘90s and I think that that’s a little outrageous since my house value has creased. I think that we need to have a balanced budget. We need to find out why—if you don’t have the money, you can’t spend the money,” Szady said.

As a former teacher, Szady receives a pension from Illinois’ Teachers Retirement System. Pensions are a huge driver of state spending.

Rauner on Monday also responded to a Politico report about his investment in a fund that owns Connect Care Solutions, a company government contracts to run prisons and detention centers, such as those housing immigrants.

“I learned of that investment through the media. I was not aware of it, I have no involvement with it,” he said. “I don’t have any voice in how the investments are managed.”

Rauner put his investments in what’s effectively a blind trust upon becoming governor.

“While Donald Trump was taking immigrant children away from their parents, instead of standing up to him like Democratic and Republican governors, Bruce Rauner was profiting. Illinois needs a governor who will fight to make this state a firewall against Trump, not one who remains cowardly silent,” Abudayyeh said in a statement.

Pritkzer’s who is wealthier than Rauner, is relying solely on his fortune to run his campaign. He has thus far shared only limited tax forms and details about his income, and a Chicago Tribune investigation revealed assets in offshore accounts.