CSO and Chorus Capture Beauty in Music of Death, Transcendence 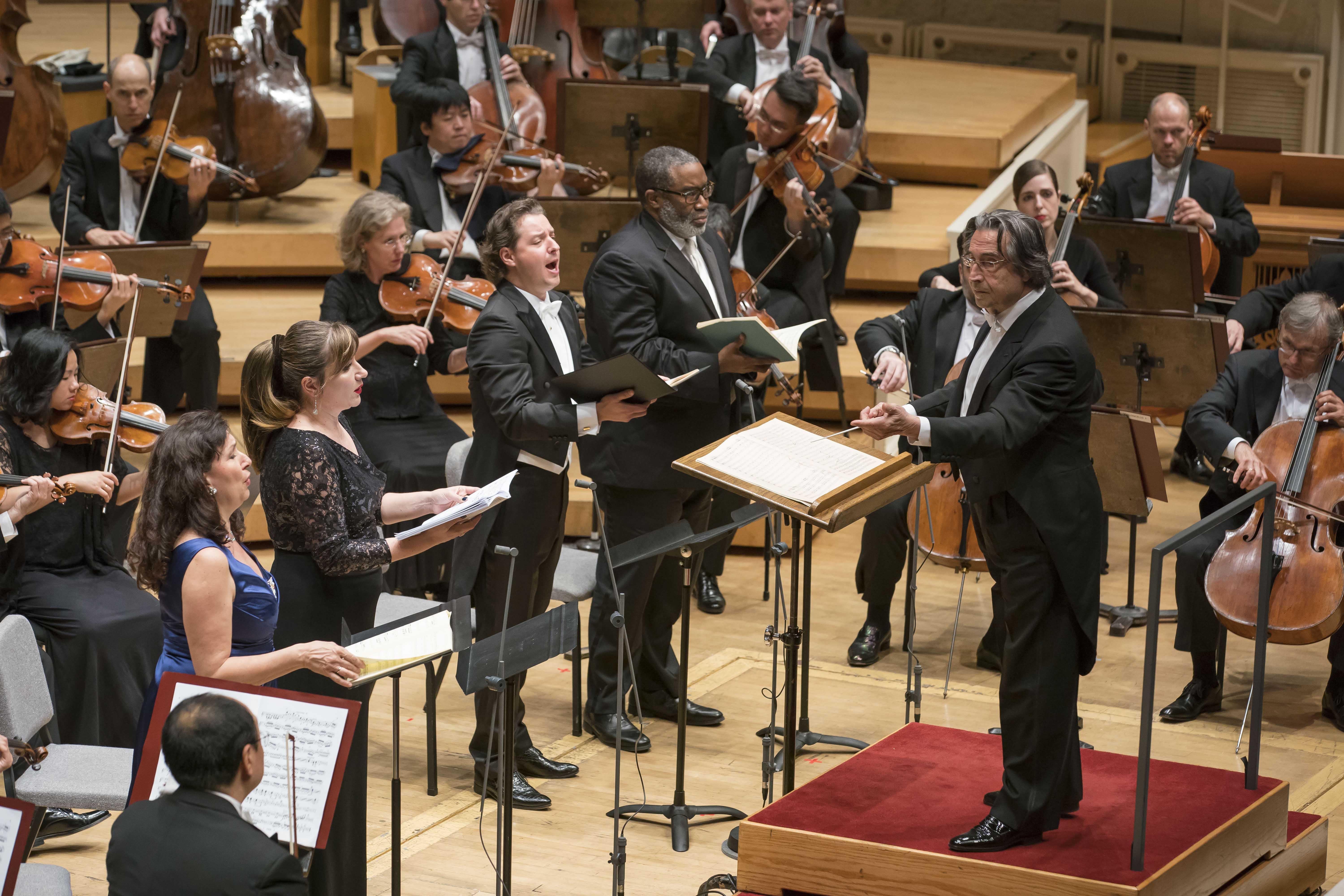 Maestro Riccardo Muti spends his life surrounded by many of the world’s finest instrumentalists, but it is the instrument of the human voice that clearly holds a special place in his heart. And when the Chicago Symphony Orchestra joins forces with the grand massing of 140 voices that is the Chicago Symphony Chorus (in addition to a quartet of superb operatic soloists), something extraordinarily beautiful invariably results.

The latest evidence came this weekend as Muti led a concert highlighted by Rossini’s “Stabat Mater,” that also included “Chant sur la mort de Joseph Haydn,” a luminous jewel of a piece by Luigi Cherubini, and Mozart’s “Kyrie in D. Minor,” a brief but exquisite setting of the mass that may have been a study for a larger work.

All three pieces were in some sense penned to honor the dead - whether it be a great composer or the central figure in Christianity. But just as many Italian Renaissance paintings of the crucifixion possess a breathtaking beauty that defies the brutality of the event, this music continually captures a vivid sense of transcendence. And Muti’s precision-tooled handling of the orchestra, soloists and chorus (a masterful ensemble under the direction of Duain Wolfe), was as ideal as a Piero della Francesca canvas.

The “Kyrie” (“Lord, have mercy”), is just six minutes long but perfectly contained. It begins with the violins that are soon countered by dark sounds from the timpani, and then joined by the low strings and the high, heavenly voices of the female section of the chorus, with the lower, earthy voices of the males subsequently joining in. The piece is a reminder of how theatrical (and in many ways modern) Mozart could be. A tiny gem of a work.

Next came Cherubini’s exquisite, rarely heard “Chant,” written as a funeral cantata for Haydn, a composer he held in great esteem. For his text, Cherubini selected a French poem about the death of a swan on the banks of the Danube, whose opening verse reads: “A singer beloved of the Gods/This swan whose glory/Had filled the world/Has died murmuring/Harmonious songs.”

The four-part work opens with the slow, mournful sounds of the violins and lower strings, joined by the clarinet, softly played horns, and timpani, with Dmitry Korchak (who starred in “Orphee et Eurydice” at Lyric Opera of Chicago this past fall), adding his warm, youthful tenor to the mix. 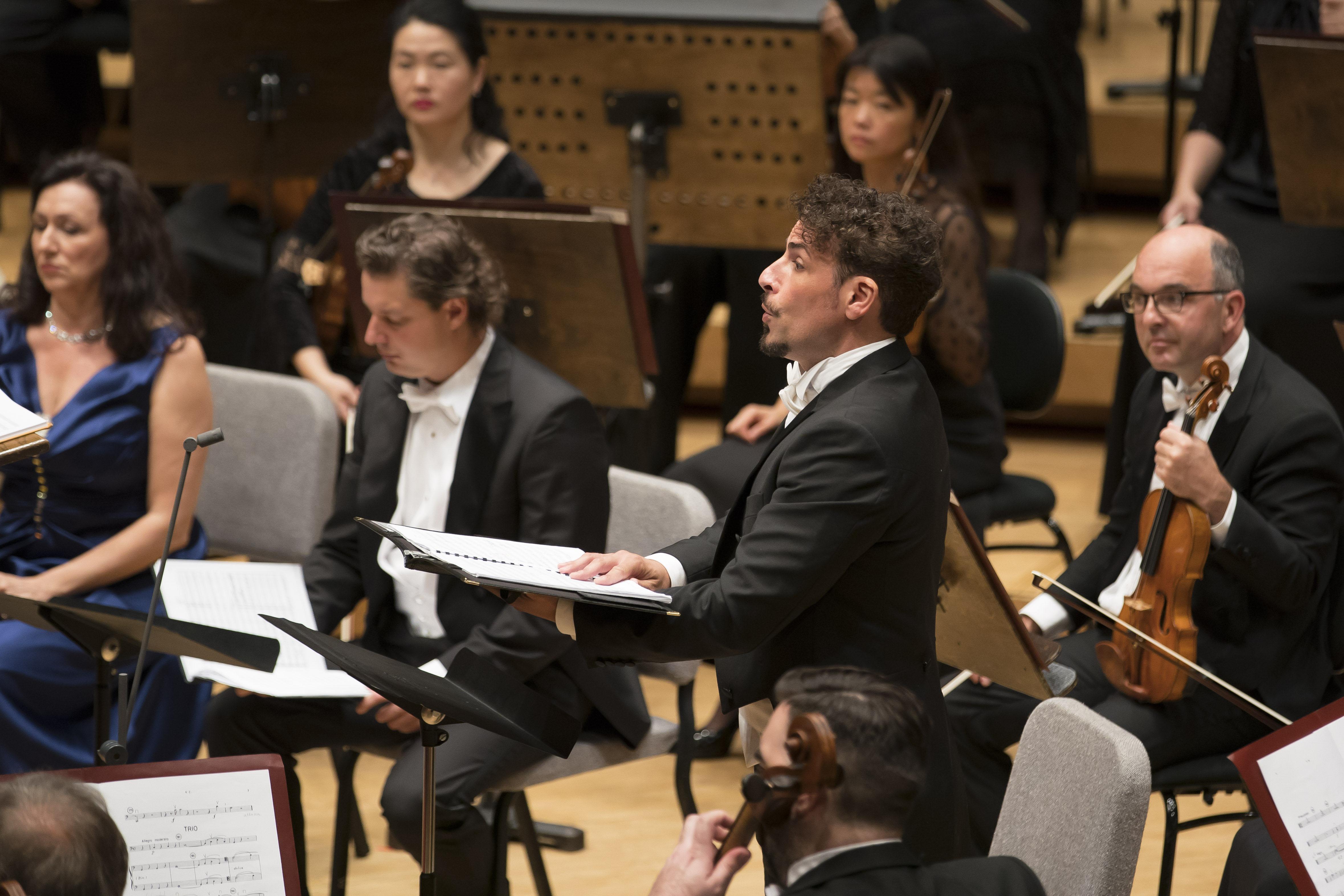 The second part takes on a stronger, angrier tone that captures the finality of death, with Enea Scala bringing his resonant tenor to describe fate’s “barbaric scissors.” The third finds the commanding soprano of Krassimira Stoyanova suggesting Haydn’s immortality. And finally, along with a brief but movingly rendered solo by concertmaster Robert Chen, all three singers joined in an a cappella sequence of glorious harmonies that proclaimed Haydn’s future as a composer whose music would charm the angels.

Finally, on to Rossini’s monumental “Stabat Mater.” The 10-part hymn gives an almost novelistic account of the suffering of the Virgin Mary at the crucifixion of Christ - a scene that opens with the mournful sound of the cellos and the chorus repeating this stark description: “The grieving mother/Stood weeping beside the cross/Where her Son was hanging.”

The lyricism of Rossini’s music can sometimes feel almost too beautiful to capture the pain of Christ’s torment and his mother’s devastating sadness, with Stoyanova and mezzo-soprano Ekaterina Gubanova blending ideally in their duet, and the rich bass-baritone of Eric Owens bringing fullness and weight to the scene describing Jesus’ beating and torment before the chorus backs his pleas for the necessary depth of empathy he might share with Mary. 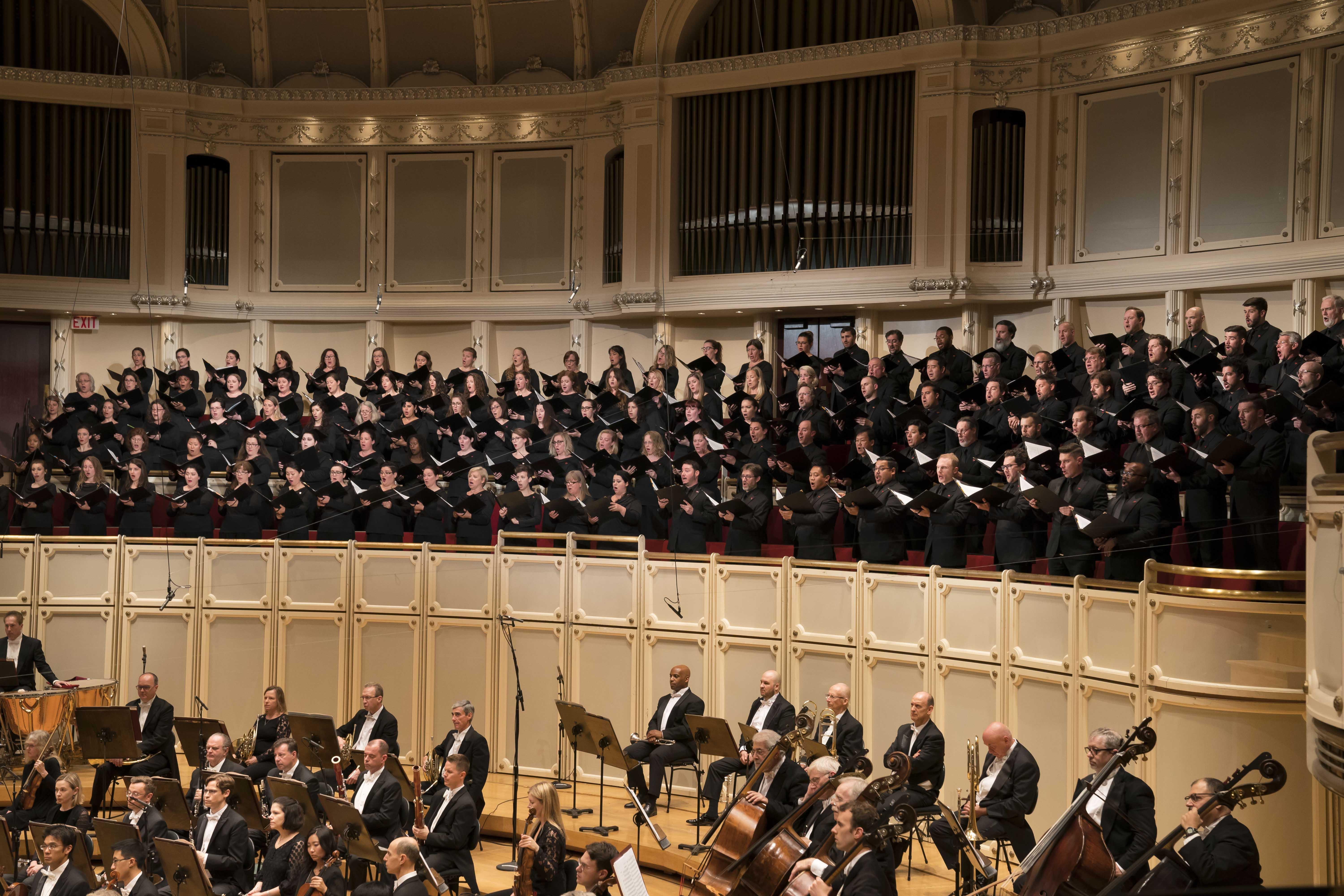 In the Cavatina (brief aria) section, Gubanova used her lush mezzo as she asked to share Christ’s passion. And then Stoyanova, joined by the chorus, made a stirring plea to be defended by the Virgin on “the day of judgement.”

But it was the final sections of the work that possessed some of the greatest magic as the chorus began with an almost otherworldly hush before climaxing on the words “glory of paradise.” Glorious, indeed - followed by both lightness and fury as the orchestra, chorus and soloists fused for a fully transporting “Amen.”

This was Maestro Muti’s last concerto of the season with the CSO. Next, he will head to Kiev, Ukraine (July 1 and 3) to conduct the 22nd annual Paths of Friendship concerts with the Orchestra and Chorus of the National Opera Theater of Ukraine as well as the Luigi Cherubini Youth Orchestra. Then, it’s on to celebrate the 50th anniversary of his debut in Florence as he conducts concert performances of Verdi’s “Macbeth” with the Orchestra and Chorus of the Maggio Musicale Fiorentino in both Florence (July 11 and 13), and Ravenna (July 15).

Muti will return to Chicago to open the 2018-2019 season with a free concert in Millennium Park (Sept. 20), featuring the CSO and the Chicago Civic Orchestra (which is celebrating its 100th anniversary).

Meanwhile, the CSO will head to Highland Park’s Ravinia Festival this summer where conductor Marin Alsop will lead a wide-ranging series of concerts celebrating the 100th anniversary of the birth of Leonard Bernstein.