Daniel Schrag’s professional credentials are impressive: He’s the director of the Center for the Environment at Harvard University where he’s a professor of environmental science and engineering. At Harvard’s Kennedy School of Government, Schrag is co-director of the Science, Technology, and Public Policy program. Throughout President Barack Obama’s eight years in office, Schrag served on the President’s Council of Advisors on Science and Technology, contributing to many reports. He has a long list of published papers ranging from the impact of corals on seawater chemistry 250 million years ago to solar geoengineering.

But nowhere in his extensive résumé will you find “prophet of doom.” Yet he very much sounds like one when speaking about the rapid rise of carbon dioxide in our atmosphere. “While climate change may not yet have had its huge impact on biodiversity,” says Schrag, “just wait. What’s coming is really extraordinary.”

In a presentation called “Our Planetary Experiment” to be unveiled at Chicago’s Adler Planetarium on Wednesday, Schrag uses his research into Earth’s geologic record as well as new data from planets beyond our solar system to determine the future of our planet as carbon dioxide emissions continue to build and heat up our atmosphere. As it stands now, Schrag concludes the “experiment” is not going well. He says that “over the next few decades, Earth’s atmosphere will return to a state not seen for millions of years.” 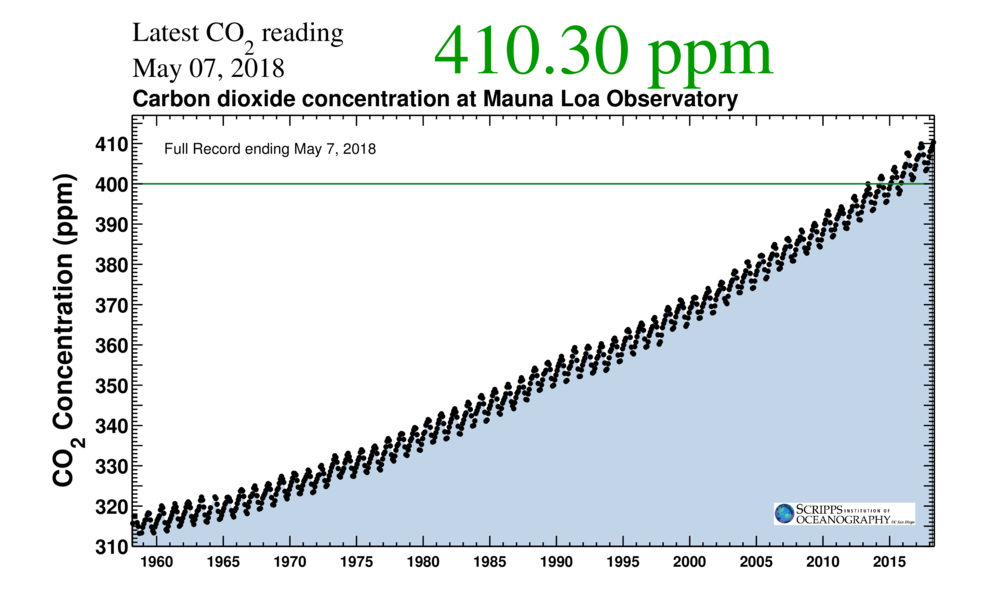 In his talks, Schrag often refers to the Keeling Curve, a graph created by American scientist Charles David Keeling in 1958. Keeling was the first to record ongoing CO2 levels in Earth’s atmosphere. In the late 1950s the CO2 readings were 315 parts per million. In 2018, that reading has exceeded 400 ppm. In analyzing Earth’s geologic record, Schrag says, “never in the last 800,000 years has CO2 been above 300 ppm.” Schrag says the last time atmospheric CO2 levels spiked sharply was around 36 million years ago when non-human factors were at play. Even then the spike occurred over thousands of years.

“We’re likely to see 4 maybe even 6 degrees (Celsius) of (global) warming over the next 100 years,” says Schrag, “and it’s happening more than 100 times faster than climate change we’ve experienced in the past.” Schrag believes there might be even more to be concerned about, saying there might be additional factors worsening climate change that scientists have not anticipated.

Adding to his grim forecast, Schrag says reversing the trend will be neither easy nor quick. For one thing, more than half of the CO2 currently affecting climate change will remain in our atmosphere 1,000 years from now. “A silver-bullet solution is not around the corner. It will require innovative investments sustained for at least the next century,” he says.

Schrag says public policy energy choices made “over the next decade or two will have profound effects on the Earth’s system, on every living thing on the planet.” Schrag says determined and sustained energy choices that reduce CO2 emissions are urgently needed to prevent his doomsday prophecies from becoming realities of biblical proportions.

Schrag joins us in discussion.