On a cool and sunny spring morning, Marty Cech is deftly piloting a strange-looking craft through Chicago’s widest, wettest thoroughfare.

He’s searching for something the city usually supplies in abundance, but this morning, Cech says the pickings are slim. “From day to day it always varies. Sometimes a little bit of garbage, sometimes a lot,” he says.

Cech is the pilot of Skim Pickens, one of two skimmer boats operated by the Metropolitan Water Reclamation District that act as the Chicago River’s floating garbage trucks. Monday through Friday, the two boats – the other one is named Skimmy Dipper – cruise the river scooping up the cans, cups, wrappers and bottles that, one way or another, wind up in the water. They’ve been patrolling the river since 2015, and MWRD principal engineer Brian Levy says the boats were custom-made to efficiently sift and lift debris from the river’s surface.

“There's a basket that's in between the two hulls that actually collects the debris from the water. The basket lowers, it skims the water, and any sort of floating debris that’s right in front of the basket, it collects it,” Levy says.

In addition to pilot Cech, deckhand Sean Kingsley is aboard the Skim Pickens to get into the odd corners the boat can’t reach. 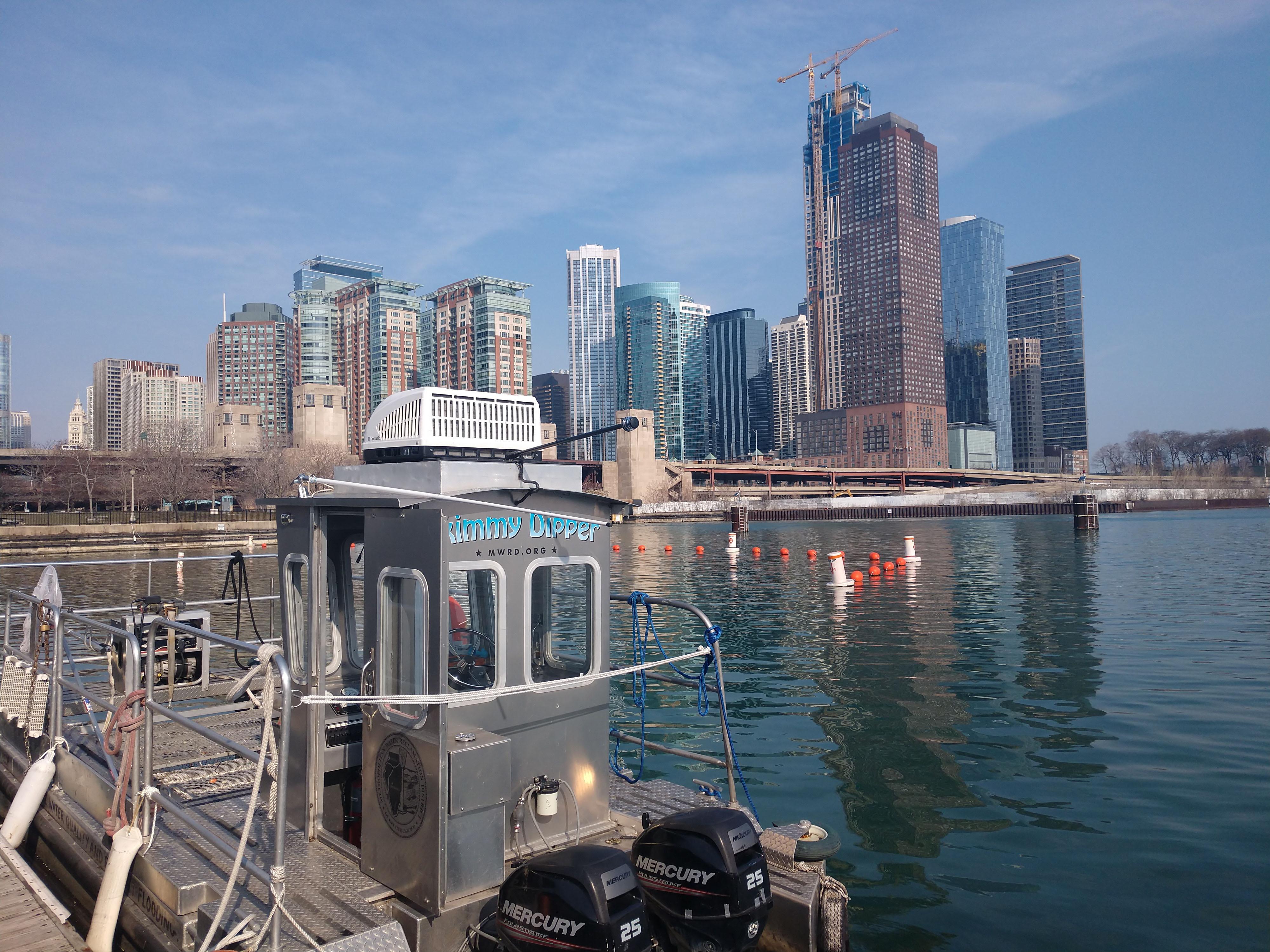 Keeping the river clean is no easy task, particularly during the summer months when the river is bustling. Cech says, “You’re moving in and amongst all the commercial vessels, tour boats, pleasure craft, kayaks, tugboats, taxis – in the heat of the summer, it's a good old fashioned traffic jam out here.”

And with all that tourism comes trash – a lot of it. Levy says his crews pull about 170 cubic yards of debris each year with their skimmer boats.

Once the basket is full, the skimmer travels to a site on the south branch, where a crane lifts the basket out of the boat and empties it into a massive container.

While the cups and bottles that make up the bulk of the catch are certainly unsightly, the crews also have to contend with a more hazardous type of debris often found bobbing along in the current – logs. Cech says, “The river flows downstream from the North Shore Channel, the North Branch, and the middle fork, so we get heavy tree debris, especially after the rain.”

And logs and other large debris require a bigger boat. Levy says, “When we find larger-type logs along the river, we try to get those out of the way to make it safer for boats to travel through. We’ll tie it up to one of our boats, and then we'll call for our debris boat to come by. It's a 36-foot pusher boat that pushes a barge that has a crane on it. That crane will actually grab that log and bring it on its barge and dispose of it.”

Levy’s crews have pulled a few other large items out of the river’s murky depths. “Mattresses, garbage cans, basketballs. Once we had to pull a couch out of the river,” Levy recalls. “A couple years ago one of the pilots actually rescued an individual that fell into the river. One of our pilots threw him a life ring and actually got him up on board.”

But, Levy says, that kind of heroism is rarely needed. For the most part, the Skim Pickens and its crew are content to float under the radar, quietly doing the dirty – and wet – work that keeps our river sparkling.