Spring training has begun. It won’t be long before the Chicago Riverwalk is full of people – and kayaks and canoes are back on the water. This year it might even be possible to swim in the Chicago River. That’s how much the water quality has improved.

The Metropolitan Water Reclamation District and environmental groups are now working together to limit the amount of phosphorus in the river. Phosphorus produces river-killing algae and green slime.

Elizabeth Brackett: Even on a chilly day it’s clear that there’s been a lot of progress made in cleaning up the Chicago River.

Ann Alexander, Natural Resources Defense Council: In 10 years we have gone from treating the river like a sewer to treating it as an urban amenity.

Brackett: And now, in an unprecedented agreement between environmental groups and the Metropolitan Water Reclamation District, another important step is being taken to improve the quality of the water.

After years of lawsuits, both sides have agreed to work together to set a limit on the amount of phosphorus the MWRD can release into the Chicago-area river system. Phosphorus comes into the treatment plants both in the raw sewage and the stormwater runoff.

Margaret Frisbie, Friends of the Chicago River: The phosphorus agreement allows us to all work together to reach a phosphorus standard, basically pulling out enough phosphorus so in the water we’re not causing unnecessary plant growth which hurts dissolved oxygen, which is what fish breathe and other aquatic life.

So it just really makes the river healthier for the aquatic life that’s coming back because the water’s so much cleaner in other ways. 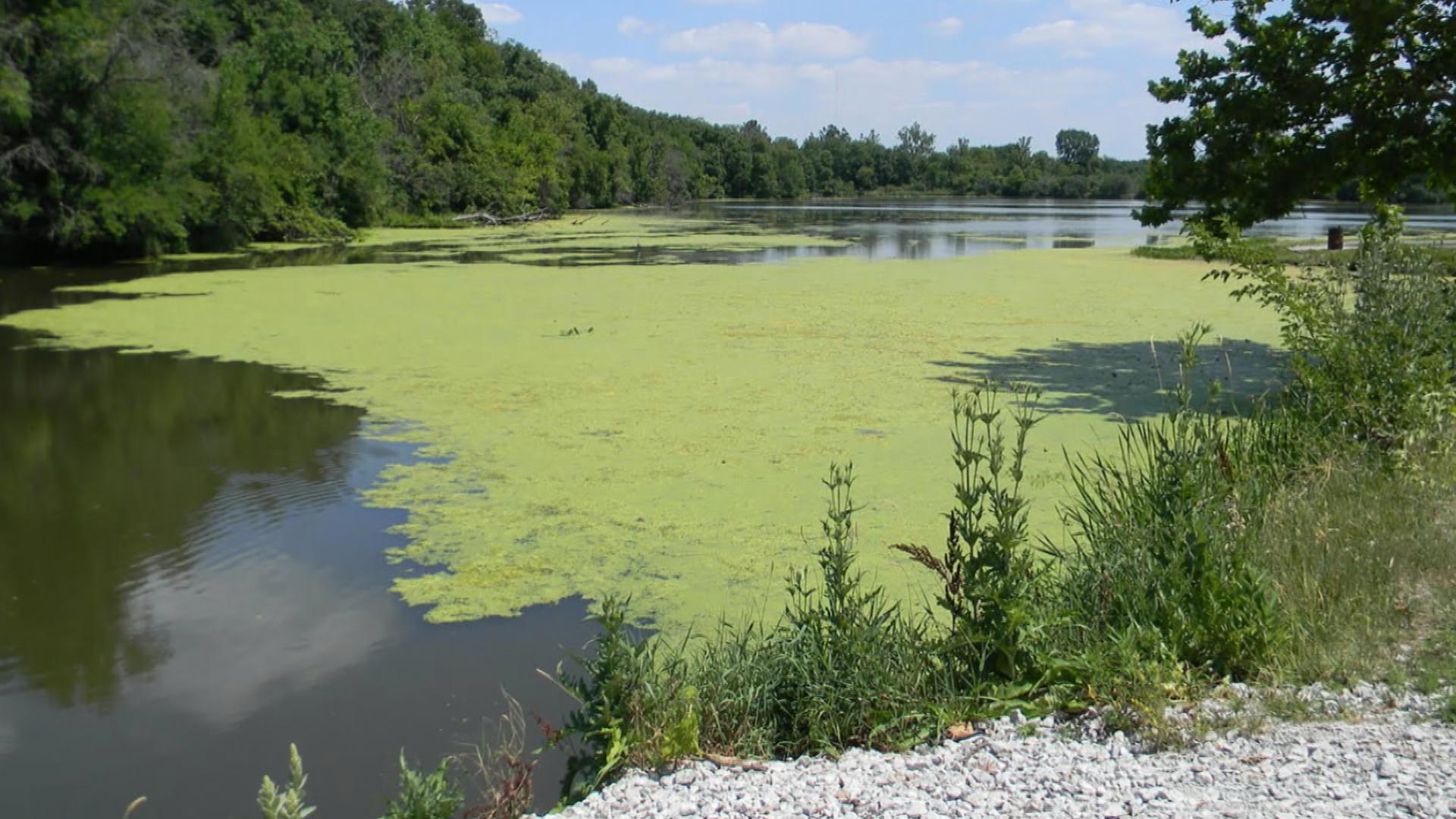 Brackett: The results of too much phosphorus can be seen in the growing algae or green slime on Chicago’s waterways. Phosphorus is used as a fertilizer on land and works the same way in the water, causing plant and algae growth. Too much algae robs the water of oxygen, killing off fish and plant life. Because the treated water flows all the way down the Mississippi, it’s not only the Chicago River that’s affected.

Alexander: You go into the lower Des Plaines River and it’s filled with phosphorus and you go all the way down to the Gulf of Mexico and phosphorus from our region is still down there. In fact, the Chicago area is actually the largest single contributor to what they call the dead zone in the gulf, where nothing can grow because of phosphorus.

Brackett: Even before the agreement, the MWRD says it has been working on reducing the amount of phosphorus it puts into the waterways.

Tom Kunetz, MWRD: The district has been, for at least the last five years, voluntarily reducing the amount of phosphorus that we have in our effluent – even though there was no permit limit – because we recognize the importance of doing that. 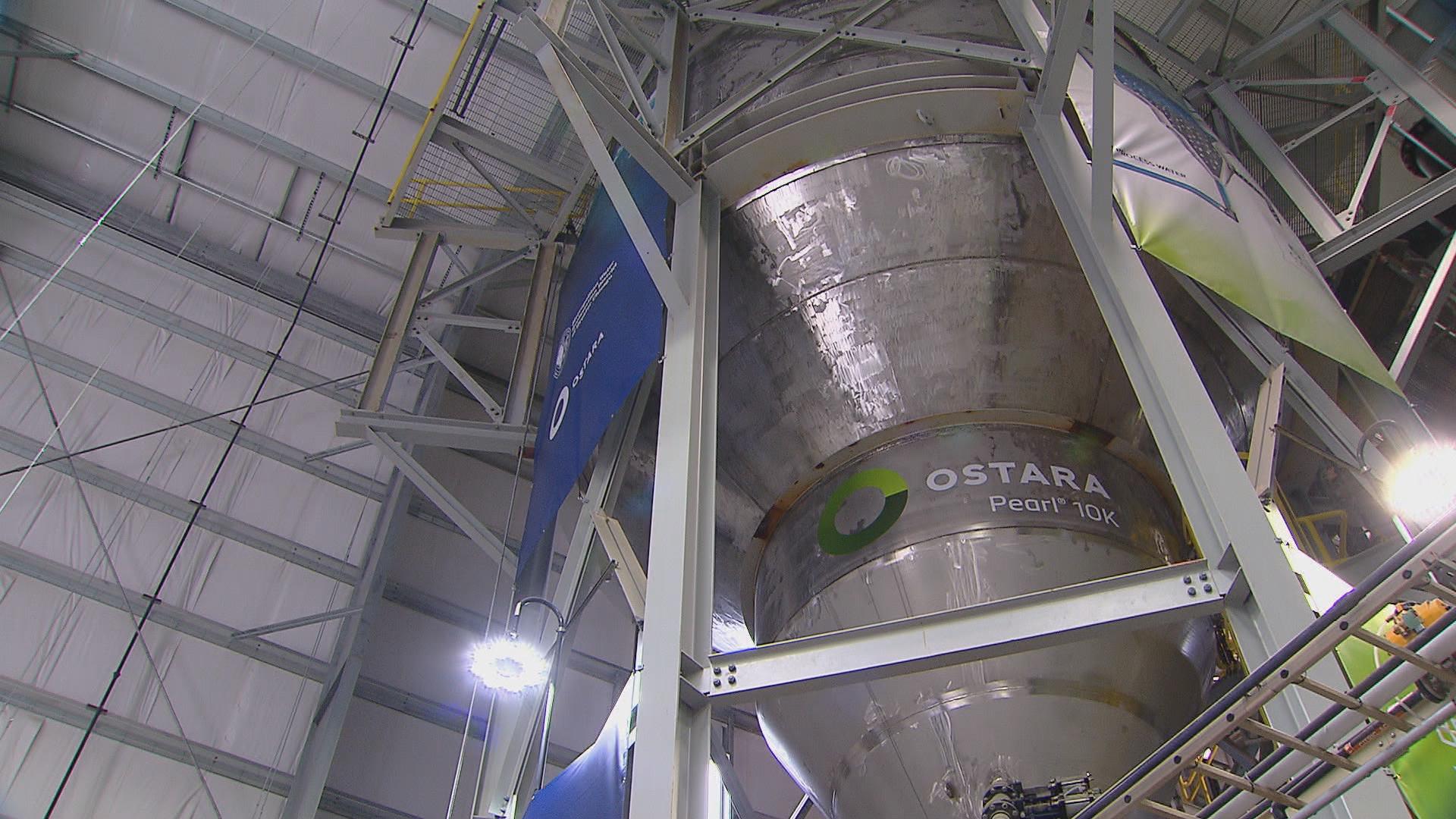 At the Terrence J. O’Brien plant in Skokie, engineers have been researching a new process that recovers phosphorus from treated wastewater using photosynthesis.

Kunetz: We have treated effluent here that has the phosphorus in it and it will come into this process and as the belts rotate down into the water, the algae that is growing on the belts will absorb the phosphorus, take it in as a nutrient source and then use it to grow as it comes up out of the water and sees the sunlight.

Brackett: The algae can then be scraped off the screens and used as a raw material for fertilizer that can be sold. Kunetz says within the next one to two years the district will be removing 90 percent of the phosphorus that comes into the treatment plants.

But the environmentalists say that’s not enough.

Alexander: The reason we had to bring a lawsuit was because it was not enough. You have to bring phosphorus down to a certain level that has been increasingly pinpointed by scientists in order to keep the algae from growing.

Brackett: The MWRD says it has more to consider than a number.

Kunetz: We’re also public stewards – not only the environment but of public money –  so it’s important that we look and say, “What’s the most cost-effective way to do something?” And sometimes just because you can treat to a certain level you have to ask the question, “Is it cost effective to do so, or could that money be used for other things in our society?”

Brackett: Now, as part of the recent court settlement, the MWRD and environmentalists will join together to figure out how much phosphorus should be allowed in Chicago’s waters.

Alexander: So what we have agreed to in this settlement is to bury the litigation hatchet, sit down together with the Water Reclamation District and also with the Illinois EPA and figure out what that number is and implement that number on a time frame.

Brackett: Burying the hatchet is almost as significant as the phosphorus agreement itself. The most recent major improvement in the river systems’ water quality that has led to the river’s renaissance only came after years of litigation.

Alexander: The first big breakthrough was when we got an order requiring the Metropolitan Water Reclamation District to start disinfecting its sewage.

Brackett: For years the district had argued that it was not cost effective to disinfect the wastewater that it had put through its treatment plants. But that changed in 2011 when the EPA raised water quality standards, requiring water in the Chicago-area rivers to be clean enough for recreational use both in and on the water, meaning kayaking , canoeing and swimming. That meant disinfection. The district went to work.

The sewage and stormwater that comes into the O’Brien plant first has solids and debris removed by screens and then flows into a series of settling tanks and aerated grit tanks that use biological and chemical processes to treat the water. The plant has the capacity to treat 450 million gallons of water per day. All the treated water then flows into the disinfection facility. 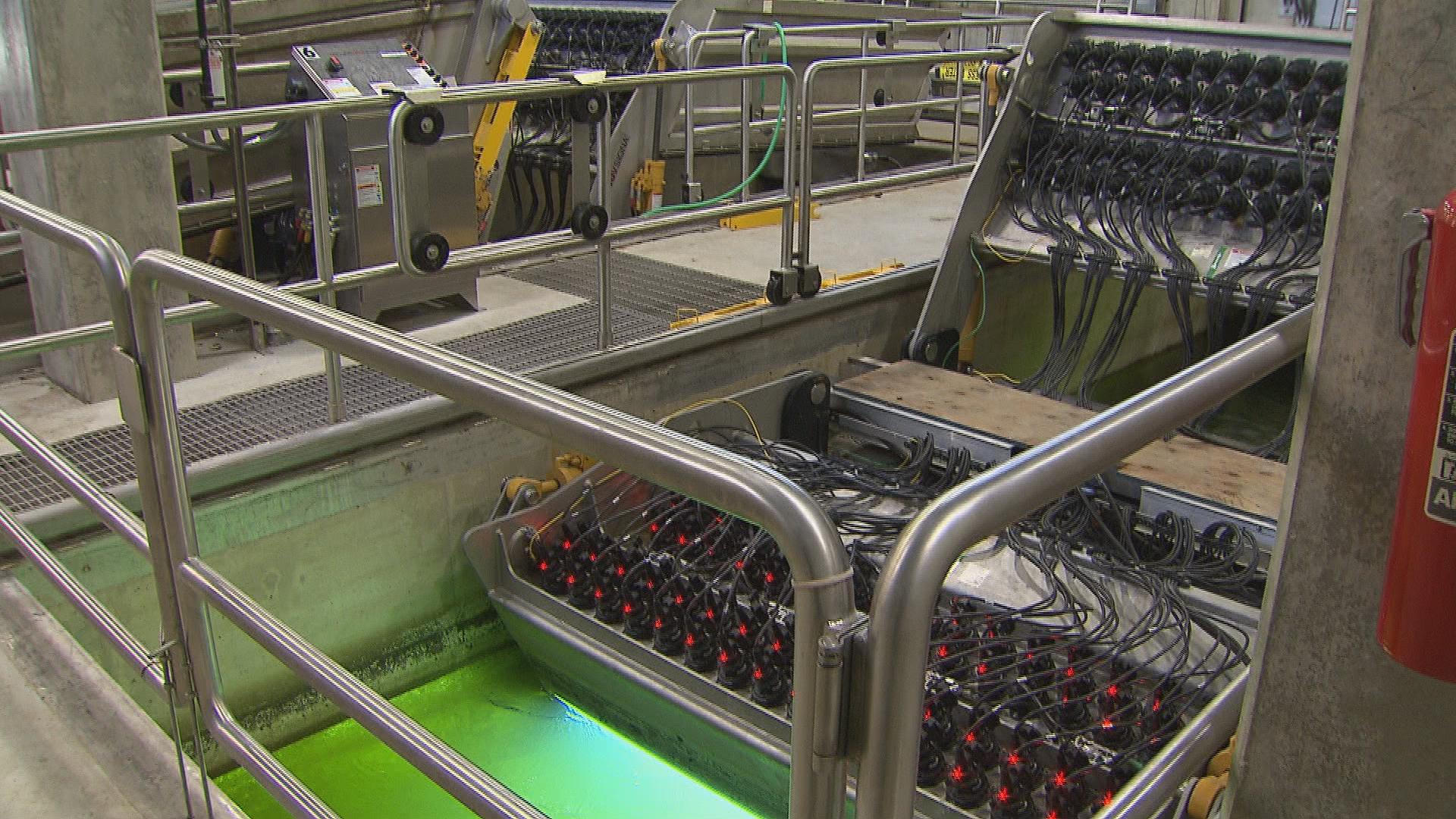 Brackett: Does it kill the bacteria?

Kunetz: It does not kill the bacteria it inactivates it, which means that it cannot reproduce.

What you see here are lamps. These lamps produce the ultraviolet light; there’s 900 lamps in this entire facility spread out across 14 banks in seven channels.

The flow comes through, and it’s designed in such a way that any drop of water that comes through is never farther than a few millimeters from any one of the lamps. By the time it gets to the other side, any of that bacteria that’s in there will have the opportunity to be inactivated.

Brackett: Last year was the first time disinfection systems were operating. The district says that means where the higher water quality standards are in place, along the north branch, the main stem, the south branch, the Cal-Sag Channel and Calumet River, it should be safe to go in the water.

Brackett (to Kunetz): Do you think in terms of water quality, can you swim in the Chicago River now?

Kunetz: So in terms of water quality we are meeting those permit requirements that the EPA has put into place, so from a water quality standpoint the water is swimmable.

In fact, recently we had the Calumet River plunge and folks were jumping in the river to celebrate the fact that we are cleaning up our waterways.

Brackett: But the environmentalists aren’t so sure about that.

Brackett (to Frisbie): So are there some days right now, when it would be swimmable?

Frisbie: I wouldn’t advise it yet because we want to understand biologically what else is going on before we tell people to jump in.

Brackett: But all agree that the improving water quality has dramatically changed the Chicago River and the way we use it. 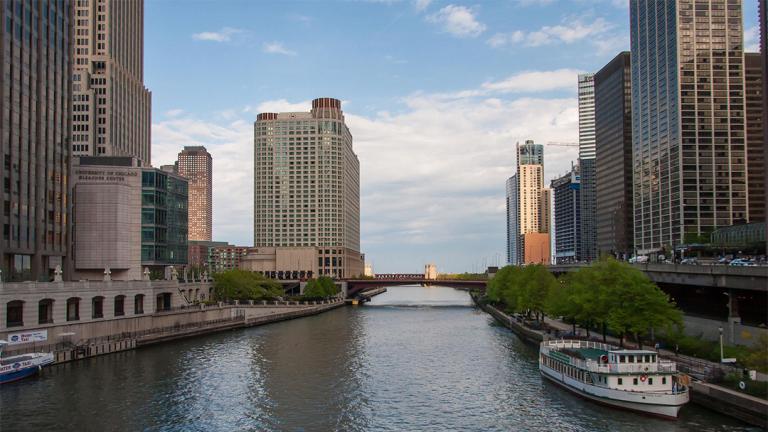 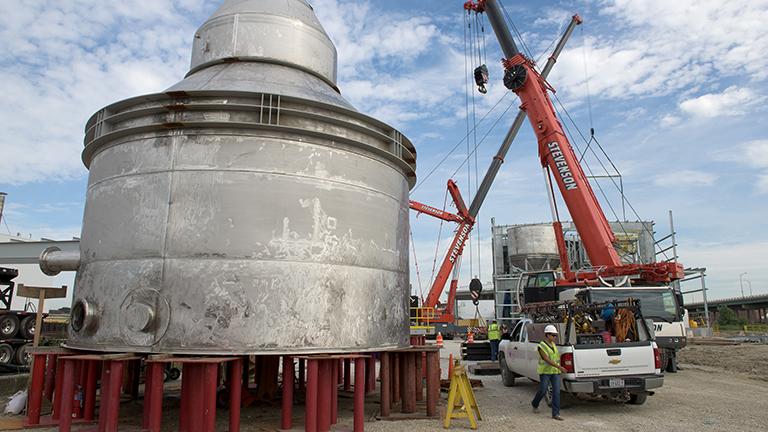 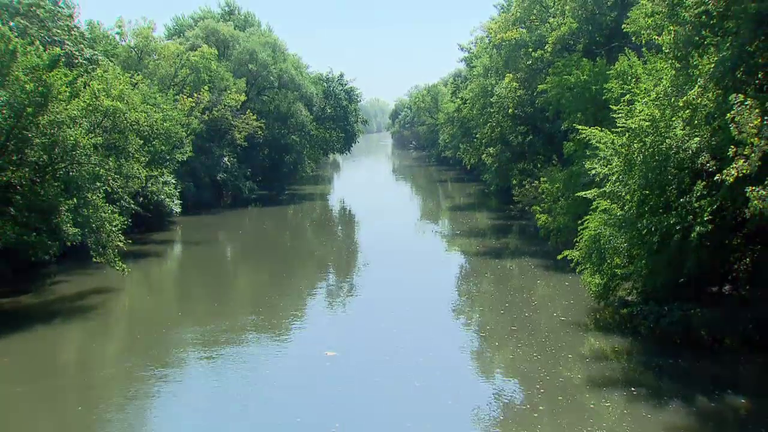 July 20, 2015: Swimming safely in the Chicago River is now one giant step closer to reality, according to sanitary officials. Chicago Tonight details the new disinfection process making that possible.