It may have seemed like a pipe dream when former Mayor Richard J. Daley once said he envisioned swimming and recreation in the notoriously unsanitary Chicago River. But a brand new, $30 million water disinfection initiative is making the former mayor's prediction a reality. Sanitary officials say a portion of the Chicago River system is ready for anyone who wants to dive in, and they say the rest of the Chicago River is not far behind.

Those who dare recreate on the Chicago River do so at their own risk. That's because water, though treated to remove the sludge or solid materials from sewage, still contains its bacteria and pathogens.

The new disinfection system has gone online at the Water Reclamation District's Calumet facility, and dirty water that enters will now be deposited into the little Calumet River bacteria free. 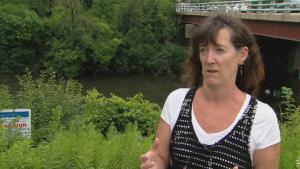 She calls it the most significant water quality improvement in decades.

“If you’re a child, or an older person, you’re more vulnerable to those pathogens,” she said. “So that means, for those people, the water is much safer now.”

Public officials broke ground on the new system last Friday. It uses chlorine to kill the bacteria, and another compound to kill the chorine, so that the treated water doesn't affect the river's wildlife.

“We’re taking a historic step because this disinfection facility now brings Chicago into the civilized world when it comes to the treatment of sewage and discharge,” said U.S. Sen. Dick Durbin. 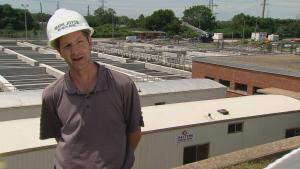 Mark Joyce Mark Joyce is the Calumet plant’s chief engineer. The new system can treat up to 400 million gallons per day, and he says the 47 communities located along the river south of Chicago are safer for swimming.

“You’re not going to drink it, but swimming in it will be much safer,” Joyce said.

Within the next year, sanitary officials will start disinfecting the north branch of the Chicago River. That means the water that runs on the North Side, the Loop, and South Sides will be one giant leap closer to being swimmable.

The O'Brien treatment plant in Skokie will use ultraviolet radiation to kill bacteria before water is discharged back into the north branch and North Shore channel.

But Frisbie says there's still more work to do.

“Every time it rains, what’s on the ground, instead of going into the ground, ends up in our sewers and pipes, and it carries with it road salt, fertilizer and other sources of pollution,” she said.

The Deep Tunnel and reservoir's project will mitigate the pollution from storm water runoff, but it won't be fully completed until the year 2029. The disinfection treatment will improve the water quality as much as 70 percent, Frisbie said, as the Chicago River transforms into the city’s next recreational frontier.

The disinfection system for the north branch of the Chicago River is expected to be operational before next spring. The project is paid mostly through federal and state sources.