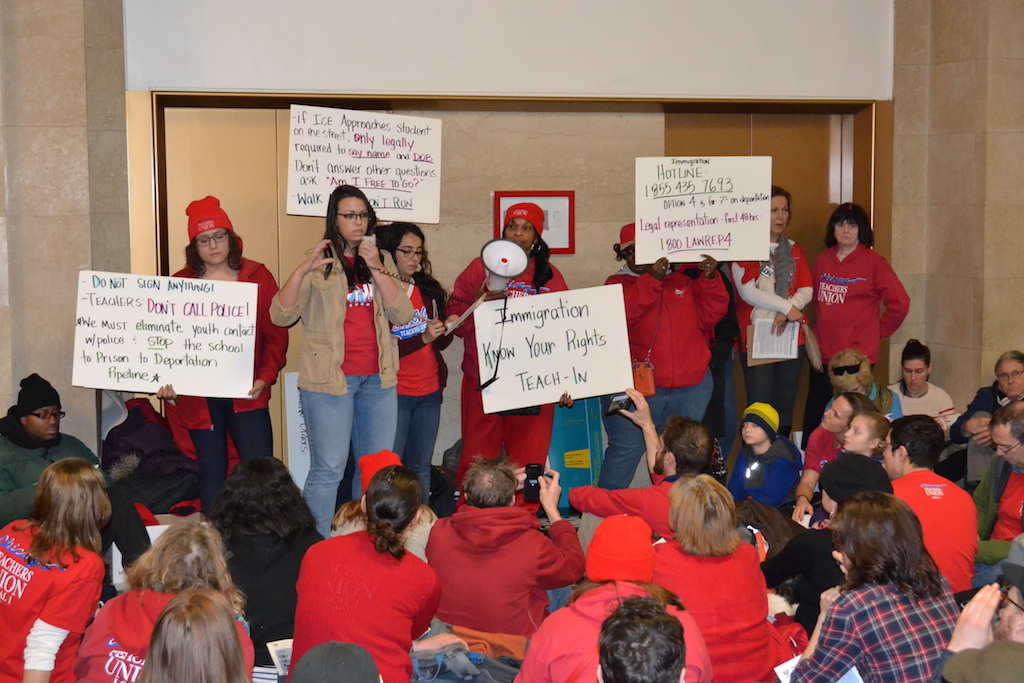 School was not in session Friday, but members of the Chicago Teachers Union put together a different sort of class downtown.

Teachers, clinicians and CTU officials renewed calls for CPS CEO Forrest Claypool to resign his position and demanded protection for undocumented students and equitable funding from the state.

“Claypool must go,” union Recording Secretary Michael Brunson said. “He is not an educator, he is a terminator.”

More than 200 union members filled the fifth floor at City Hall, taking seats on the floor to grade papers, plan class assignments and hear “lessons” on school revenue, clinician services and the protection of immigrant students.

The furloughs come as CPS works to fill a $215 million hole in its budget left after Gov. Bruce Rauner vetoed state funding that had been set for the district. The move is expected to save CPS $35 million.

But union officials claim the furloughs represent a 2 percent pay cut for its members and violate their new contract with the district and the Board of Education, which had guaranteed 10 professional development days per school year.

The board has not yet revealed how it plans to fill the rest of the gap, but has scheduled public hearings for Feb. 13 before it votes on a revised budget later this month. One possibility is a shortened school year, but some CTU members fear additional cuts could hit the clerks who manage finances and other day-to-day activities inside individual schools.

“Teachers are already overworked. Chicago Public School clerks are the first line of defense that those students see when they walk in the school building,” said Sabrina Woods, a school clerk who’s worked at Foreman High School for the past 24 years. “Rahm firing them makes our schools less secure, less welcoming, less safe and not a sanctuary school.”

CTU was joined Friday by members of the Amalgamated Transit Union, both of whom decried attacks against workforces comprised largely of women.

State Rep. Will Guzzardi (D-Chicago) also addressed the crowd, placing blame for the furloughs and the district’s budget crisis back on Rauner. He criticized the state’s broken education funding formula for punishing poor school districts, while rewarding the “wealthiest and whitest” districts.

Claypool himself issued a statement late Thursday criticizing the governor’s “lame excuses” for maintaining the nation’s most inequitable funding system. But the district has been silent on the union’s vote of no confidence on Claypool and its demand for him to step down immediately.

Though she did not attend the protest, CTU President Karen Lewis issued a statement accusing Claypool of “gross negligence and mismanagement,” calling him a “nightmare” for union members.

“The fact that his only option for balancing the budget was to furlough tens of thousands of hardworking educators on four of their contractually obligated PD days is not only dishonest,” she said, “but shows that he knows nothing about leading a classroom – nor does he care.”