Lawmakers Considering How to Pay for an Education Funding Overhaul

A commission of state lawmakers has been meeting twice a month to discuss how we can change Illinois' education funding formula.

Though the state is spending more money on education this year than in the past seven years at least, some advocates argue it's still not enough, and the way we spend that money is inequitable.

On Wednesday, Chicago Tonight reported about one particular model, the evidence-based funding model, which is all about how we spend the money. But what's just as important is how we raise the money.

The way some folks have framed it: We need to slice the pie more equitably, but we also need a bigger pie.

This week the Center for Tax and Budget Accountability released a report detailing the economic benefits of investing more in education, but the group also has suggestions for how to pay for it.

And as we mentioned Wednesday, some models could cost the state more than $5 billion beyond what it already spends.

Lawmakers in both parties say they'll likely have to do something that's always been politically unpopular: raise taxes.

“Nobody wants to talk about raising taxes,” said state Sen. Karen McConnaughay. “But the reality is that we probably will have to raise taxes at some point. There’s never just one solution, there’s always best practices to look at; there’s ways to improve the way we are doing business. Some people say, ‘You don’t need more money, you just need to be more efficient.’ Sure, we need to be more efficient. But the reality is … we need to make more investment in education; we need to put more money into the system in order to do that.”

Some lawmakers have argued that the state's tax structure needs updating anyway, that it's built on collecting taxes during a time when the state received more revenue from the manufacturing industry, but it's not as big as it used to be.

They say taxing the service industry would lead to greater income to fund an education overhaul.

“Adding sales taxes to services is something that many many states do and nearly every state around us does. The fact that we don’t do that means we’re leaving literally upwards of $4 billion on the table. The political reality of that is going to be, which services do you add? That is what makes that task so incredibly difficult,” said State Sen. Toi Hutchinson. “You will have all kinds of people who have an entire business model based on the fact that we don’t pay taxes on those things, and then you have an electorate that believes they pay taxes on everything.”

Of course, the other political reality is coming up with legislation that'll not only make it through both chambers of the House, but also, be signed by the governor.

Taxing the service industry would include an expansion of the sales tax, so we'd be taxing the sale of services ranging from your cable TV to haircuts.

Their proposal doesn't include professional or health care services, but still enough to generate $2 billion.

Another one of their ideas is reinstating some version of the temporary income tax that expired in the beginning of 2015.

“Our income tax: We just had it phased down as of January 1st of 2015 from 5 percent to 3.75 percent–that was a killer. Cost the state over $5 billion in lost annual revenue. Every percentage point increase in the sales tax rate in Illinois generates about $3.3 billion net to the state. So literally, if we went back up to that 5 maybe 5.2 percent, we’d have all the revenue we’d need to fund the evidence-based model and we’d still be relatively low tax,” said Ralph Martire, the CTBA’s executive director.

We also spoke with the folks at the Illinois Policy Institute, another independent, nonprofit research organization, and they feel there are still a lot of unanswered questions.

They argue pensions are eating up about half of education spending, and until that problem is solved, nothing else can be.

Ted Dabrowski, the institute’s vice president and spokesman, makes the case that it's not fair to ask taxpayers to pay even more, when the government itself hasn't passed any real reforms.

Read our full Q&A with Dabrowski below.

Chicago Tonight: What are your thoughts on the current education funding reform discussion?

Ted Dabrowski: There are a lot of facts, a lot data points being used to defend the evidence-based model. And, I think first, a lot of facts need to be clarified. How much money do we actually have in education? Where does that money go and where does it not go? There's a lot of confusion about that. 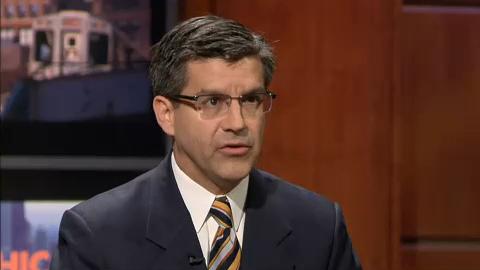 Ted Dabrowski appears on “Chicago Tonight” in May 2015 to discuss Gov. Bruce Rauner's proposed 2016 fiscal budget. We're going to be moving from one complex funding formula to another complex funding formula that in theory is based on evidence. We’re talking about large-sector public bureaucracies determining these facts. [There’s] a lot to be extremely cautious about.

The bottom line for me is: Do any of these models increase accountability to parents? At which point do parents have more control over that money than the big public sector bureaucracies creating these models? I'd argue they don’t give parents any more control than they have in the current model.

In all of these numbers we're discussing, nobody’s adding the amount of money spent on education pensions. Fifty percent goes to pensions, 50 percent goes to classrooms. If that's not part of the discussion, you'll never get funding equity, if you're looking for fairness. As long as we have a model that prioritizes pensions over classrooms, we’re never going to fix the system. I don't see that on any of these presentations on reaching an equitable funding system.

CT: Should the state spend its education money differently? Do we even need an education funding overhaul?

When you look at some ISBE (Illinois State Board of Education) numbers – one percent goes to the richest districts. Ten percent goes to that middle group. Property poor districts – as designated by ISBE – they get 89 percent of that money.

CT: Should Illinois not use local property taxes to fund schools? Is there another way?

TD: I'd argue districts that want to spend crazy with their own money should be able to do that. Then the question really is, is there enough state money to ensure that districts that don't have enough money get it?

Those wealthy districts are the ones that pay the most income taxes that's used for redistribution to [low-income districts] and other areas. If you map zip codes, you’d see a massive overlap between districts that get little from state and pay tons in taxes for redistribution for others.

TD: We need to move discussion towards, “How do we grant parents and the system more alternatives to do more innovation …?” This [evidenced-based model] is just taking one big funding model approach, mixing it up and coming up with a new one and we haven't changed the outcome.

The state needs a model that empowers parents. I think parents should have power to hold schools accountable, or the system won't work, by giving them the power to leave.

I want that low income parent to have same choices as parent in Wilmette or Winnetka. They [should] have power to leave and go somewhere else. This system doesn't do any of that. It just moves the money around in a way that's different, but it’s not fundamentally better and it spends a lot more to do it.

I don't think it's fair to ask people to pay more and more taxes when the government hasn't passed any reforms. We can continue to put more money into education but if you don't empower the parents and give them more power, then you're just taking money away from them and not giving them choices. I don't think that's fair. As long as pension eats up 50 percent of education, wrong to ask taxpayers to put more into a system that has yet to be proven.