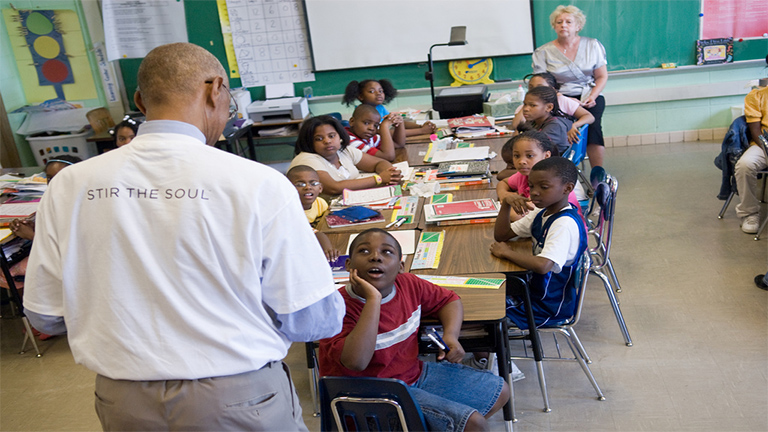 A new study by the Economic Policy Institute has found teachers on average earn 17 percent less than other college-educated professionals. (Chicago 2016 / Flickr)

The wage gap between teachers and the rest of the college-educated workforce has become larger than ever, a new report states, at a time when both the demand for teachers is growing and the pool of qualified candidates is becoming smaller and smaller.

The Economic Policy Institute released a study on Tuesday that found average weekly wages for public school teachers across the country are 17 percent lower than professionals in other fields who’ve earned a college degree – a startling difference considering that gap was just 1.8 percent in 1994.

According to the study, between 1996 and 2015, teachers in the public sector saw their weekly pay shrink by $30, on average, to $1,092. Over that same period, per-week wages for college graduates entering other professions grew by more than $120, to $1,416. Both figures were adjusted for inflation.

According to the EPI, a Washington D.C.-based think tank focused on economic research, male teachers have always seen a larger gap in pay compared to women. But data included in the study shows women teachers, whose wages were nearly 15 percent larger than those of other female college grads in 1960, now earn 14 percent less than comparable women in the workforce. 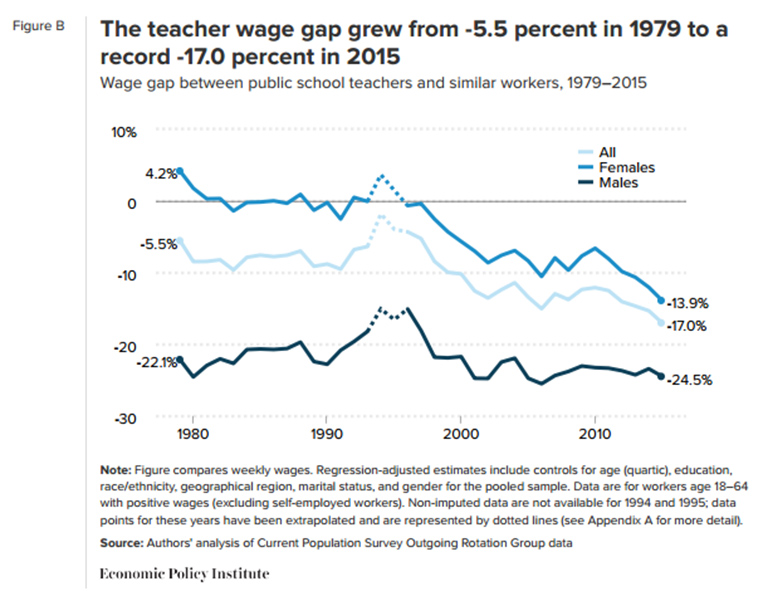 “First of all, part of it is a symptom of the impact the Great Recession had on government budgets and it’s just a sign, I think it’s a really important indication of how wrong-headed the public discourse is around public employees and teachers,” said state Sen. Daniel Biss (D-Skokie), a former University of Chicago professor and current member of the Senate Committee on Education.

“You hear a lot of propaganda that tells you teachers are overpaid, and most people, I bet, feel like that’s probably not true and … the data makes that clear. I think it’s an important thing to be aware of and an important thing to try and fix, but of course you fix it over time with funds and that requires a whole bigger and really crucial policy session.”

While Biss’ claim about the recession’s effect on teacher pay is generally true, Chicago teachers actually reported the highest average raise – 6.5 percent – between 2008 and 2012 out of the 41 school districts studied by the National Council on Teacher Quality.

The wage gap adds to an already difficult period for educators, according to the EPI study, as the supply of teachers is limited by high turnover rates, retirements and a drop in the number of students entering the education field.

But it’s not just an Illinois problem – the study found that in no state in the country do college-educated teachers earn more or even as much as other college grads.

Within Chicago Public Schools, the nearly 14,000 employee positions classified as “regular teachers” on the district’s June 2016 roster earn an average full-time equivalent salary of $70,376. While that total is well above the state average, it still checks in at more than $100 below what that same category of CPS teachers earned on average just two years earlier. Those figures do not take into account the 500-plus teachers recently laid off by CPS or its newly announced $5.4 billion budget.

“It’s a hard job,” said Casey Fuess, a music teacher and choir director at the Lindblom Math & Science Academy, a selective enrollment public school on Chicago's south side. “And when we’re not retaining teachers, we end up with this revolving door of inexperienced teachers. And we’re not doing our students justice when we do that.”

Fuess believes quality teachers have left the Chicago area because they can’t manage to afford the cost of living or find the type of home environment they want for their families within the city on a teacher’s salary.

With less than a month until the new school year starts, Fuess said Lindblom is still looking to fill four vacant positions. Going into his sixth year at the school, he has brought a sense of balance at least to the school’s music program after it had gone through four choir directors in the five years prior to his arrival.

“I’ve been able to create a lot of partnerships and opportunities for my students to work with musicians through Music of the Baroque, the Lyric Opera, Lakeside Singers, Chicago A Capella and other professional music organizations,” Fuess said. “And that’s just not something that can exist on day one for a new teacher. It’s something that’s built over time and the relationships teachers have with community members, community organizations. Those things can quickly be lost with high rates of teacher mobility and turnaround.”

While the pay gap has steadily increased, the EPI is quick to note many teachers do receive pensions and other competitive benefit packages that help level out their total compensation. But even when adjusted for those factors, teacher compensation still comes in below that of their college-educated counterparts.

What’s more frustrating to James Staros, a government and history teacher entering his 14th year at King College Prep High School in Kenwood, is when resources needed to foster student and teacher success get cut – such as nurses, librarians and student counselors – putting added pressure on educators.

“Larger class sizes are difficult, (with) less support staff, it takes longer for things to get done,” he said. “If I’m a carpenter and you don’t give me a hammer, my skill level is somewhat hamstrung by the fact that I don’t have the tools I need to use.”

Still, there does not appear to be any easy fix. Collective bargaining appears to help level the field – non-union teachers saw a wage gap six points larger than those represented by a union. The EPI study suggests that raising teacher compensation is “critical to recruiting and retaining high-quality teachers.” But it goes on to claim policies focused solely on changing the makeup of teacher compensation without actually increasing wage levels are likely to fail.

At least in Chicago's case, Staros believes the city should consider additional taxes to help boost funding, while Fuess thinks the rhetoric surrounding public education needs to be changed from the top down. 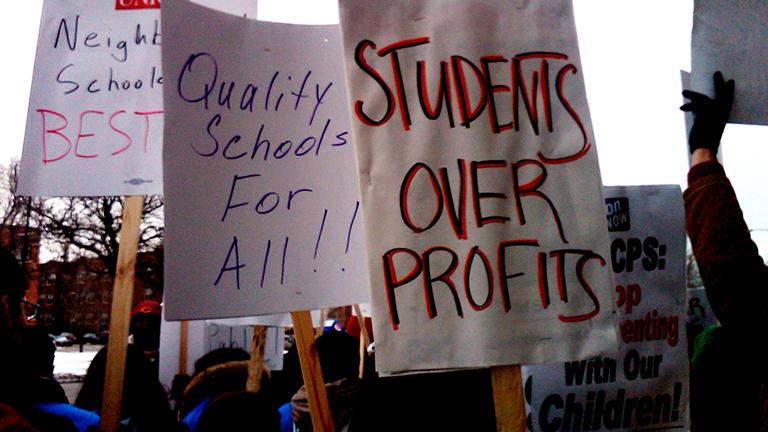 July 20: During a City Council meeting on Wednesday, a handful of aldermen introduced a package of ordinances that the group Parents 4 Teachers hopes will increase funding to CPS and spare further budget cuts.