From Jean Baptiste DuSable to Black Lives Matter, the history of African-Americans in Chicago is one of struggle and determination. A new exhibit at the Newberry Library highlights more than 200 years of the African-American experience in the city, including the latest demonstrations in the wake of the release of the Laquan McDonald video.

“Chicago Tonight” takes a look at the rare artifacts that make up the exhibit.

The Newberry Library is hosting a few events in conjunction with the exhibit. Information about those events are listed below along with descriptions provided by the library.

Emmett Till: Why His Story Still Matters

The tragic story of Emmett Till is well known. Much like Trayvon Martin and Laquan McDonald in our own day, Till’s death symbolizes the destructive legacy of race in America. Elliott Gorn, historian at Loyola University Chicago, will discuss why Emmett Till was—and continues to be—so important

Hand Maidens for Travelers: The Missing Story of the Pullman Maids

While black male Pullman porters were a highly visible symbol of the elegance of the Pullman car, their black female counterparts—maids and attendants—labored in relative obscurity in the interior of the railroad cars. Miriam Thaggert, associate professor of English at the University of Iowa, will discuss the difficulties—and liberties—of working as a “hand maiden” for the Pullman Company.

A panel of Chicago activists exchanges ideas about present-day efforts to effect social change in the city.

Interested in scheduling such a tour? Email the Newberry Library.

Eddie Arruza: An 1884 “History of Chicago” begins with an image depicting Jean Baptiste DuSable. In the book, he's described as the area's first landed proprietor and a handsome, rich and faithful Negro. It also says he was the first disappointed man of Chicago following the flooding of his log cabin and his subsequent move to Missouri. A new exhibit at the Newberry Library points out that DuSable would not be the last disappointed black man or woman in the city.

Diane Dillon, director of department exhibitions and major projects: We have parts of the exhibition that really celebrate the achievement of black Chicagoans and the African-American community at-large in Chicago. But we also wanted to show the struggles that they’ve gone through from the time of the first African-American settles in the 1840s on down to the present day.

EA: The exhibit is called "Civil War to Civil Rights," and it draws from the Newberry's extensive collections, presenting nearly 200 years of the African-American experience in Chicago.

One of the earliest and rarest of the artifacts is a photograph from the 1860s of a former slave named Nancy. She was brought to Chicago to serve as a nanny. The image of a black servant with her wards was almost unheard of at the time. Not long after, in 1871, a journalist and real estate developer by the name of John Jones became the first African-American Chicagoan voted into public office as a Cook County commissioner. 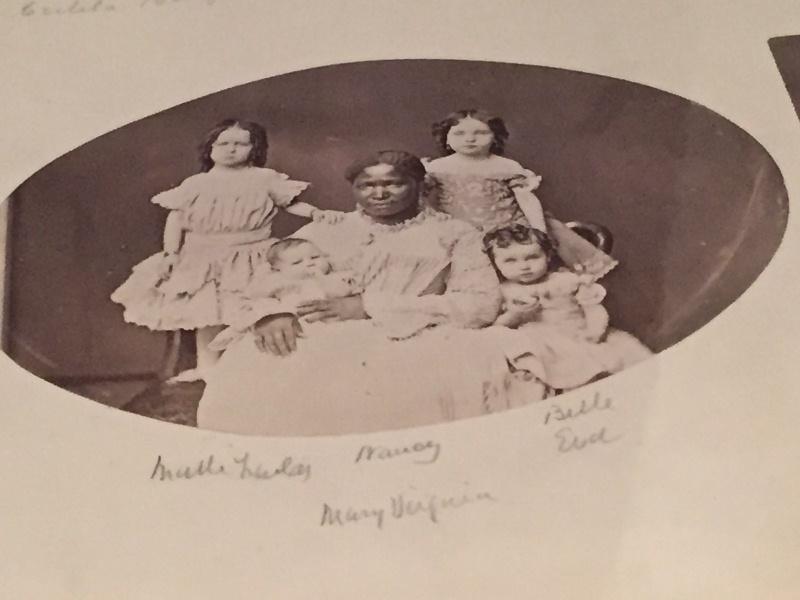 A rare photo of a former slave, Nancy, in her capacity as a nanny in Chicago.

DD: He actually wrote in the Tribune in an article saying, “We must have our civil rights.” So this idea of activism for African-American civil rights really has a long history in Chicago.

EA: But at the dawn of the 20th century, civil and equal rights for African-Americans were still far out of reach, especially in the Deep South. It prompted the Great Migration that brought hundreds of thousands of African-Americans to Chicago. As the century wore on, tensions between Chicago's black and white communities grew, reaching a violent boiling point in the summer of 1919. That's when a white man threw a rock and killed a black youth who accidentally swam into what was considered the "white section" of Lake Michigan.

A policeman at the scene refused to act and a week of rioting ensued.

EA: A report called the Negro in Chicago was produced in the aftermath of the race riots

DD: Despite efforts like this that call attention to the injustices and the need for reform, any changes tended to be minor and temporary. So this is a history that gets repeated again and again over the course of the 20th century and into the 21st century. 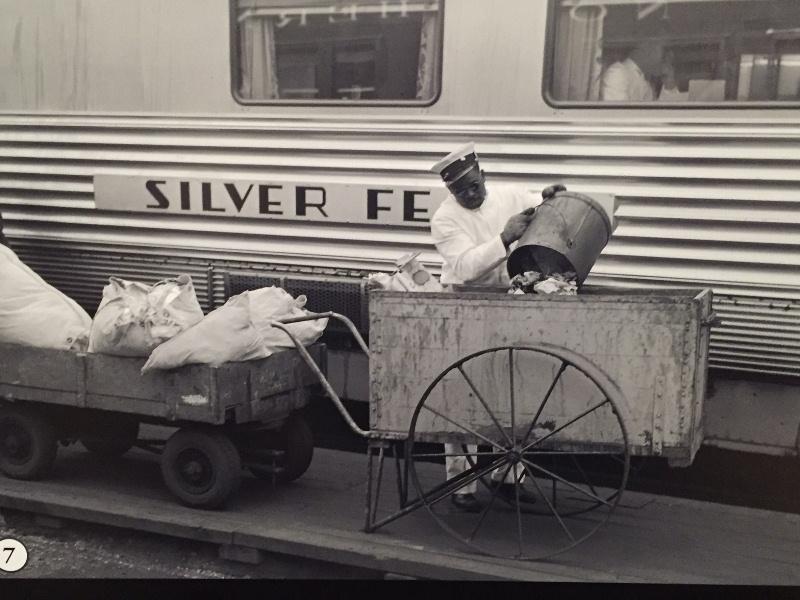 A trash collector for the Chicago, Burlington and Quincy Railroad, 1940s.

EA: The railroad industry played an important role in the lives of African-Americans in Chicago. Most famous among those railroads was the Pullman Palace Car Company. The Newberry Library has most of the company's records: everything from employment applications to an extensive collection of photographs. Some of those photos are glossy and staged publicity shots, but others depict the real world of black rail company workers.

DD: They were paid very low wages and just expected to earn tips which didn’t bring them up to a living wage at all. So this spawned a very well-known labor organizing effort by the Brotherhood of Sleeping Car Porters to organize these men into a union, and it wasn’t until the New Deal when legislation struck down company unions that the Brotherhood of Sleeping Car Porters was officially recognized.

EA: Chicago did not have Jim Crow laws on the books but that did not prevent widespread housing discrimination for blacks. In some cases, white residents took matters into their own hands, forming what were called restrictive covenants or colored restrictions, a practice that formed a key plot point in Lorraine Hansberry's "A Raisin in the Sun": "I don’t know what you think you’re going to gain by moving into a neighborhood where you just aren’t wanted.”

DD: Entire neighborhoods would sign on to this practice that would effectively exclude African-Americans from living in that community, and this was prevalent all over Chicago.

EA: But the exhibit is not all about hardships, discrimination and struggles. Chicago has produced many distinguished African-American artists. Among them, dance pioneer and civil rights activist Katherine Dunham.

"I pick up my life
And take it with me
And I put it down in
Chicago, Detroit, Buffalo, Sacramento,
Any place that is North"

There’s a first edition Richard Wright and letters of Gwendolyn Blakely, who was born Gwendolyn Brooks.

One section of the exhibit that was not part of the original plan takes on events from just the last few months. 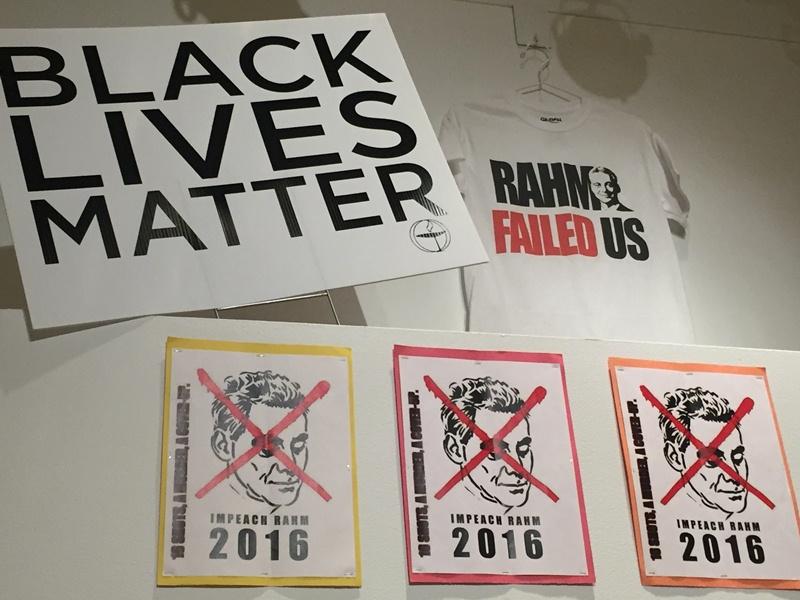 DD: So we adapted the exhibition to draw connections between the current climate of protest and the long struggle for African-American civil rights in Chicago really from the 1860s to the present.

EA: Visitors are invited to leave their thoughts on post it notes that will become part of the Newberry's archives. From tragedies of enormous magnitude, to little-known triumphs, the road from "Civil War to Civil Rights" has been a long one for Chicago African-Americans.

The exhibition, "Civil War to Civil Rights: African-American Chicago in the Newberry Collection" continues through April 2 at the Newberry Library. For library hours and location, visit the Newberry's website.