In the wake of the deadly terror attacks in Paris, many governors across the country, mostly Republicans, are saying they are unwilling to allow Syrian refugees to be settled in their states, among them Illinois Gov. Bruce Rauner. They say their fear is that terrorists might hide among legitimate refugees and perpetrate more terror attacks.

It's a response that is rejected outright by President Obama.

"They've been playing on fear in order to try to score political points," Obama said during a news conference. "Or to advance their campaigns. It's irresponsible, and it's contrary to who we are, and it needs to stop because the world is watching."

So what should the Obama administration be doing to blunt this threat and are some Republicans unfairly targeting refugees fleeing terror?

Joining us to discuss the refugee crisis and response are Suzanne Sahloul, president of the Syrian Community Network; Ed Lasky, news editor of the conservative-leaning magazine American Thinker; and Galya Ruffer, professor of political science and director of the Center for Forced Migration Studies housed at the Buffett Institute for Global Studies at Northwestern University.

On whether pausing or stopping refugees' access to the U.S. is reasonable

"We have to balance our sense of compassion with common sense," said Ed Lasky. "There's a situation in Syria that's different than other refugee crises that have inflicted the world in the last 50-60 years. ISIL has come out and openly boasted of their intention to smuggle terrorists in with asylum seekers and immigrants and migrants, and we have to keep that in mind because they've shown to be very adaptable and very shrewd in terms of their attacks. Given that, those concerns shouldn't be objects of derision from the president, for instance.

"There was a recent poll taken of Syrian refugees–Arab Opinion Index–that indicated 13 percent of the 900 Syrians interviewed had sympathy for the goals of ISIL. I think that distinguishes this sort of situation from previous situations."

"I think it's a mistake in policy," said Galya Ruffer. "What we have in our resettlement program is a very thorough process that was set in place–for many years, particularly after Sept. 11–but also after Iraq. In 2010 we instituted further safeguards to be able to thoroughly vet refugees through the resettlement program."

"I don't think that there's a link between the Paris bombing and migration," said Ruffer. "It's been shown that one of the people had traveled through Greece and then made his way and took part in it, but most of the other people who took part in the Paris attacks were actually from Belgium and France. They were not refugees by any sense, and they were not migrants." 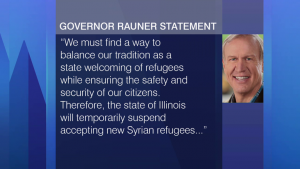 Gov. Bruce Rauner announced on Monday that Illinois is temporarily closing its border to the settlement of Syrian refugees in the wake of the attacks in Paris. But does everyone agree with the move, and do governors have the authority to halt the program? 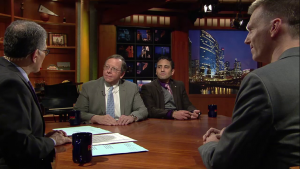 This weekend, the French military bombed an ISIS stronghold in Syria and French President Francois Hollande on Tuesday addressed a joint session of the French Parliament. We discuss the attacks and their aftermath with a panel of experts. 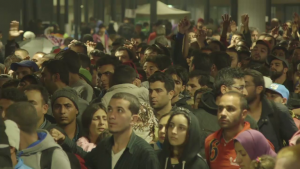 As hundreds of thousands of Syrians risk their lives attempting to flee to Europe, a modest number have found asylum in Chicago. Just how are Syrians acclimating to life here, and will Washington open the door to more refugees?