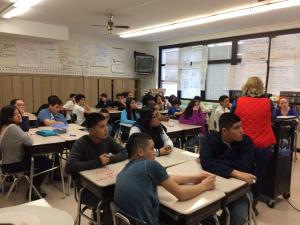 Educators in Chicago are taking a new approach to getting students to and through college -- by focusing on students much earlier, in sixth through eighth grades.

To that end, Chicago Public Schools is partnering with the University of Chicago's Urban Education Institute and Lefkofsky Family Foundation to invest almost $4 million in what's called The Success Project --  focusing on students' middle school years to prepare them for their college years.

“I'm going to start asking you some questions, and I just want you to answer them according to whatever your vision is. OK? So what is your vision for yourself? What do you want for yourself, for your future?” said Angelica Fuentes, a success coordinator at Pasteur Elementary.

Eighth-grader Stoykof Nunez already has a vision for his future after elementary school.

“Where do you see yourself, right after high school?” said Fuentes. 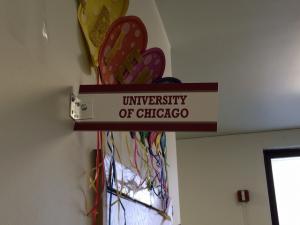 He hopes to study robotics, and eventually work for the military as a robotics engineer.

His "success coordinator" Angelica Fuentes is here to keep him on the right track -- even though he's only in eighth grade.

“Even if a student does have good grades and attendance, if they attend the wrong high school that doesn't support them, they can fall through the cracks as well,” Fuentes said.

Fuentes is part of a new program called The Success Project -- a partnership between the University of Chicago's Urban Education Institute and CPS.

She became interested in the work because of her own experience as a once undocumented student, who was eventually able to attend and graduate from Dartmouth College.

“When I tell people my story, I always say I was very lucky,” Fuentes said. “When I found out about this project, I thought to my experience, and thought, well, I don't want kids to have to be lucky to be able to reach their dream of even just going to college.”

The project centers around what's called the 6to16 curriculum -- helping students beginning in sixth grade to finish college.

Try a 6to16 sample test for seventh-grade students. 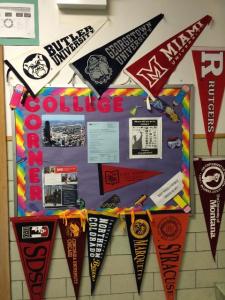 “We know that the middle grades matter,” said John Gasko, CEO of UChicago Impact and managing director of the University of Chicago Urban Education Institute. “If we know the importance of the ninth grade year—we call it freshman on track—to that story it makes sense that if we can get more and more students successful in ninth grade. There's an implication for what we do before ninth grade.”

The program places one full-time success coordinator, like Fuentes, at each of the 10 neighborhood elementary schools.

It also partners with the Academy for Urban School Leadership to train existing staff at 23 CPS turnaround schools to provide the same lessons.

Click on the map below to learn more about The Success Project schools.

Success coordinators guide students through discussions on creating a plan for the future, financial aid, and earning potential.

“There's charter schools; there’s magnet schools; there’s art schools; there’s International Baccalaureate schools. So being able to catalog and provide that information to students, so that they can start consuming this, not just in eighth grade, but looking at it in sixth grade. Giving students access to trips to go visit different kinds high schools,” Gasko said. “We do find in Chicago that there are many children in elementary schools that are eligible to apply to selective enrollment that don't.”

The Success Project is built on research from the University's Consortium on Chicago School Research about the importance of the middle grades.

“To end high school with the kinds of records that you need to be likely to succeed in college, you need to be getting really strong grades in middle school, so all A’s and B’s, basically,” said Elaine Allensworth, Lewis-Sebring director of the Consortium on Chicago School Research. “Students who had below a 3.0 GPA in the middle grades had virtually no chance of leaving high school college ready. And to have a 50/50 chance, students need to be getting at least a 3.5 GPA, which means at least half their classes had to be A’s and other half B’s.”

And, they say attendance matters, too.

“Of course, we want to pay attention to the skills students are developing, but to do that, you need to make sure that students are coming to school every day, that they’re engaged, that they’re interested in the work,” Allensworth said. “That's actually the best way to get those test-score gains. When we're focusing on test and test preparation, students become disengaged. They become bored. They become frustrated. So, yes, pay attention to skills, but do that by looking at whether students are really engaged in learning, coming to school every day, putting in effort, and getting excited about learning.”

To continue adding to that research, the consortium will also study the success of The Success Project itself.

To further boost middle grade achievement, CPS is seeking to establish an Alternative Learning Opportunity Program to help 10,000 middle grades students and ninth graders who are struggling with school.

This is the first time CPS has sought bids from providers to provide more intensive, alternative learning options for that age group.

--As a part of our initiative to bring attention to the high school dropout crisis, we bring you this American Graduate report.