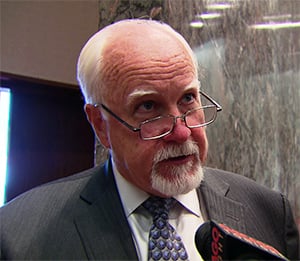 40th Ward Alderman Pat O’Connor, the mayor’s City Council floor leader, lashed out today at claims that he passed a bill trying to weaken the city council watchdog’s power to police campaign finance. And he says the timing of the bill, first reported by Chicago Tonight, is not connected to a recently opened probe into possible campaign finance violations O’Connor may have committed. O’Connor says the new law does not take away Legislative Inspector General Faisal Khan’s power to investigate improper campaign contributions.

“He is the rightful investigator of that today, as well as last Wednesday. It is factually a false issue.”

The bill moves much of the responsibility to oversee whether or not aldermen committed campaign finance violations to the relatively obscure Board of Ethics, which has said in the past it cannot handle that responsibility, and even penned a letter to the mayor and aldermen that the duty should be under the purview of the Legislative Inspector General.

Board of Ethics Chairman Stephen Beard says the new law is not ideal, but he says the board intends to comply.

“Now that City Council has returned that responsibility to us, we will have to play a role in investigating campaign finance. We will do our best,” Beard said, noting that he plans to meet with the board to figure out whether he’ll need to rearrange staffing and seek more resources from the city.

O’Connor says the allegations brought against him that he took improper campaign contributions are false. The allegations surfaced first on Wednesday in the Chicago Tribune.

O’Connor called into question how the Tribune might have learned of the allegations, which by law the Inspector General must keep confidential until the investigation is complete, so soon after the bill passed.

“The timing is incredible. A cynic might say that someone leaked some confidential information in contravention of the law of the city of Chicago,” he said, inferring that if the source of the leak was inside Mr. Khan’s office, it would violate the rules governing that office.