It's a story that rowing coach Montana Butsch loves to tell, about his 18-year-old coxswain (the person in charge of, and steering the boat), Brian Bahena. 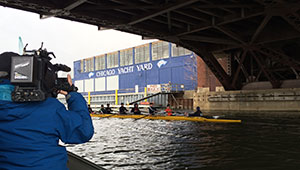 Bahena started as a freshman and at his first practice unceremoniously threw up in the garbage cans throughout the training center. He was woefully out of shape.

He loves telling that story, it was only one time.

Bahena made a stellar comeback -- not only to practice but to become one of the Chicago Training Center's (CTC) unofficial captains and winner of the group's Spirit Award.

Today, along the south branch of the Chicago River, Bahena gives directions to his eight teammates. And as a National Merit Scholar and Posse Scholarship recipient, he's one shining example of why Butsch founded the organization eight years ago.

Like Bahena, some of his teammates appreciate rowing because it's not the typical sport their friends play. Whether or not their friends understand, these students get it.

And that is what Butsch is hoping to achieve through CTC.

Students practice almost every day and in the winter, they continue indoors. They learn to repair the boats themselves and almost every weekend participate in a competition, sometimes out of state. Butsch points out that CTC helps students reach and maintain at least a 3.5 GPA.

The center operates on a $300,000 annual budget, raised through grants and donations. Staying afloat as an organization hasn't always been easy, but Butsch now knows that after eight years, CTC is here to stay.

--Brandis Friedman contributed to this story.