We take a look at the Art Institute of Chicago's gallery of American Folk Art on Chicago Tonight at 7:00 pm. View a photo slideshow of some of the artifacts featured in the gallery below, and read an excerpt from For Kith and Kin: The Folk Art Collection at the Art Institute of Chicago, a new book that catalogs the downtown museums' extensive collection. 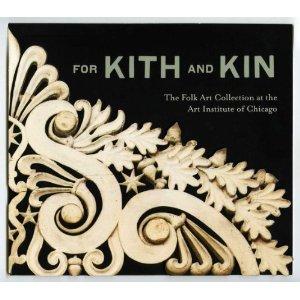 Usually from vernacular and rural traditions, folk art at its best implies work produced by those with a singular vision, often highly skilled craftsmen, perhaps unsophisticated by academic standards, but with a sense of composition, decoration, and design that is superb. The early history of folk art at the Art Institute of Chicago is a rich one, enhanced by the generosity and vision of many inspiring collectors.

Emma B. Hodge was first known in Chicago for her superlative, professionally trained contralto and her contributions to the Plymouth Congregational Church and the choral programs of the city. Born in Milwaukee, she met her husband, Walter Hodge, an English immigrant working in a dry-goods store, while singing in a Swedish and Norwegian choral group, the Freja Society. The couple married in 1879 and had three children by 1885. The 1900 census records list Mrs. Hodge, by then a widow, living with her sister, Jene Bell, their widowed mother, and a servant. By 1905 the family lived on Ellis Avenue, in a fashionable neighborhood on the city’s South Side.

How Hodge gained the financial means to become an important collector of ceramics, books, samplers, quilts, and antique valentines is an unsolved mystery. She began to collect pottery in the 1890s with the help of her close friend Frank Wakeley Gunsaulus, who was the pastor at Plymouth Church after 1887. In 1899 he formed an independent church, the Central Church, which held services at the Auditorium Building on Michigan Avenue. Both Hodge and Gunsaulus were patrons of the Art Institute and two of the earliest and most important folk art collectors.

Initially, Hodge and her sister, Jene Bell, put together a collection of over one thousand pieces of American and English pottery and porcelain in memory of their mother, Amelia Blanxius, whose family had come from Sweden to join the large community of Swedes in Chicago. They gave that collection—ranging from old Worcester soft-paste porcelain, Chelsea figurines, Staffordshire creamware, and Whieldon-Wedgwood pottery, to early English slipware and New England red earthenware—to the Art Institute in 1912–15. Hodge’s interest in American history is reflected in some of the transfer-printed English pottery made for the American market that she collected, such as a Liverpool jug depicting the new states of the young republic.

Hodge continued to donate porcelain and pottery to the museum in the following years, but her interest also turned to textiles. In 1915 the museum borrowed samplers from her collection to show at the 13th Annual Exhibition of Industrial Arts, which was ironically titled given that it was a show about the rich history of textiles and handicraft. The term industrial was at the time the equivalent of what we today might call “useful” arts, as industry included human labor. Alongside Hodge’s samplers were weavings from the looms of the Herter Brothers and embroidery by Hungarian peasant workers.

Interest in textiles at the Art Institute was high. From the founding of the Decorative Art Society in 1879, with the help of textile artist Candace Wheeler, both the Antiquarian Society and Mr.  and Mrs. Martin A. Ryerson began collecting textiles. At the height of the Arts and Crafts movement in Chicago, there was a growing recognition of the importance of historic textiles and the promotion and preservation of immigrant handicrafts at institutions such as Hull House and the Art Institute. 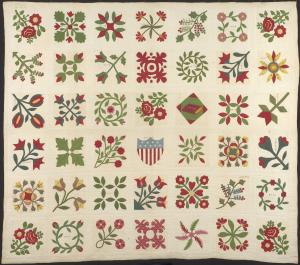 Hodge’s textile collecting had the same motivation as her pottery collecting—her love of the eighteenth and early nineteenth centuries and her association of that period with the patriotism of the early republic. The Colonial Revival was so strong a motivation in her collecting that one of Hodge’s gifts to the Art Institute, an album quilt of 1862, was sentimentally described early in the twentieth century not in terms of its beauty,but through the romanticized story of its ownership by an Ohio itinerant preacher, who, as an evangelist, converted hundreds on the frontier. No doubt Hodge herself embellished the provenance of the quilt, saying that it belonged to a “circuit rider” and that quilts represented “the story of American women from Jamestown and Plymouth down; the story of their thoughts and hopes and dreams, as well as of the skill of their fingers.”1 Literature about the quilt described the preacher on his horse holding a Bible. Yet there is no record that the supposed owner of the quilt was a circuit rider or that such ministries were common in 1862. There is also no record of how Hodge obtained the quilt. However, the associations of an object were as important as the object itself for Colonial Revival collectors.

An interest in the Colonial Revival and craftsmanship was common in collecting circles during the early twentieth century. Indeed, Hodge’s passion for quilts ran parallel to her friend Gunsaulus’s love of weavings. He donated over thirty weavings to the Art Institute in 1911, and by 1922, the date of his last gift, his collection of coverlets—beautiful examples of the use of looms during the Industrial Revolution—numbered well over sixty. Gunsaulus helped to found the Armour Institute of Technology with Philip Armour in 1893 and served for twenty seven years as its first president. He wrote that education must link head, hand, and heart and made providing vocational training for young men his mission.3 This linking of craft with machine certainly informed his collecting of American woven coverlets.

Hodge also continued to collect textiles but, unlike Gunsaulus, favored the handwork of pieced quilts and schoolgirl samplers. She donated twenty-eight quilts made between the
1820s and 1850s to the Art Institute in 1919, and her collection— featuring the “Red Rose Wreath” and “Cherry Trees and Robins” (cat. 18) quilts—was put on indefinite display in the fall of 1922.

These early folk art collectors did not confine themselves to Chicago sources. Near the end of her life, Hodge wrote that collecting was a seasonal activity and that warm spring weather increased her “fever” for travel and the passion of the hunt. She purchased porcelain from the Duveen Brothers in New York and attended auctions. She surrounded herself with artifacts in her room in her daughter’s house at 618 Deming. There, amid soft chrome-colored wallpaper with muted gray and brown medallions of Paul Revere’s ride, John Hancock’s house, the Boston Tea Party, Independence Hall in Philadelphia, the Liberty Bell draped with the American Flag, Betsy Ross’s house, and the fifes and drums of the “Spirit of Seventy Six,” she wrote “Chats on Collecting” for her family. She also gave to other institutions along with the Art Institute, including the Philadelphia and Cleveland art museums, and generously advised collectors in her circle. 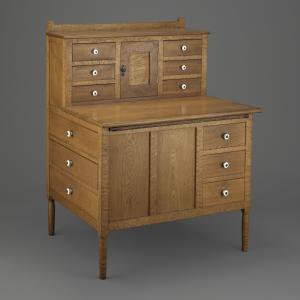 During the summer, both Gunsaulus and Hodge visited their Chicago friends William H. and Alice Trainer Miner. William, born in Wisconsin, moved as a child to Chazy, New York, a few miles from the Canadian border. In the early 1880s, he made his way west again to work with the railroads centered in Chicago. He patented more than one hundred inventions to improve refrigerated railway cars and made his fortune in his new city. By 1903 the Miners moved back to his childhood farm in Chazy. In six years, the family built over three hundred buildings on the old homestead, now called Heart’s Delight, and employed over eight hundred workers in a modern mega farm that grew produce for New York’s finest restaurants (and Chicago’s Palmer House); contained fish hatcheries and gristmills; and raised purebred horses, Guernsey and Durham cattle, Dorset sheep, and Yorkshire and Chester white swine. By damming local rivers, the Miners brought electricity to the residents of their rural community by 1908.

The guest books of Heart’s Delight show that Alice’s Chicago collecting friends Hodge and Bessie Bennett (the first curator of decorative arts at the Art Institute) visited in January 1915 after a successful collecting foray:

While the snow was softly falling
And the logs were burning bright
Three china collectors
At the farm of Heart’s Delight
Installed both jugs and platters
In a case all painted white.
These ladies hunted far and wide
Ransacked all the country side
From deerpark unto crossing Lake Champlain
And the treasures they collected
Are now to be inspected
By friends who happen in from off the train.

The following year, Hodge wrote a catalogue of the Miners’ collection and donated a piece of Lincoln presidential china to her friend from her own collection.

The Miners’ connections to Chicago remained strong. During that same year, Gunsaulus asked William to fund an addition to the Art Institute. He donated the necessary fifty thousand dollars (around one million dollars today) but insisted the wing be named for Gunsaulus instead of himself.  During the summers, Hodge visited the Miner farm with Gunsaulus and his daughter, Helen, who was the curator of the Buckingham Collection of Japanese prints at the Art Institute. Both Gunsaulus and Hodge encouraged the Miners to collect Japanese prints during the 1920s.

For these friends and collectors, the patriotism and enthusiasm of the Colonial Revival had given way to the Arts and Crafts movement’s love of all things handmade and preindustrial.
Gunsaulus continued to collect coverlets (he and his wife founded the Colonial Coverlet Guild of America in 1924 to support weaving projects) but also now amassed a collection of rare books, manuscripts, and Japanese prints. Hodge widened her collecting interests—focusing on nineteenth-century valentines, glass, children’s books (including Kate Greenaway illustration proofs), Rowlandson prints, toys, dolls, and Far Eastern textiles in addition to ceramics and American textiles—until her death in 1928.