Music Theater Works’ Production of ‘Zorro: The Musical’ Is Lavish (and Long-ish) 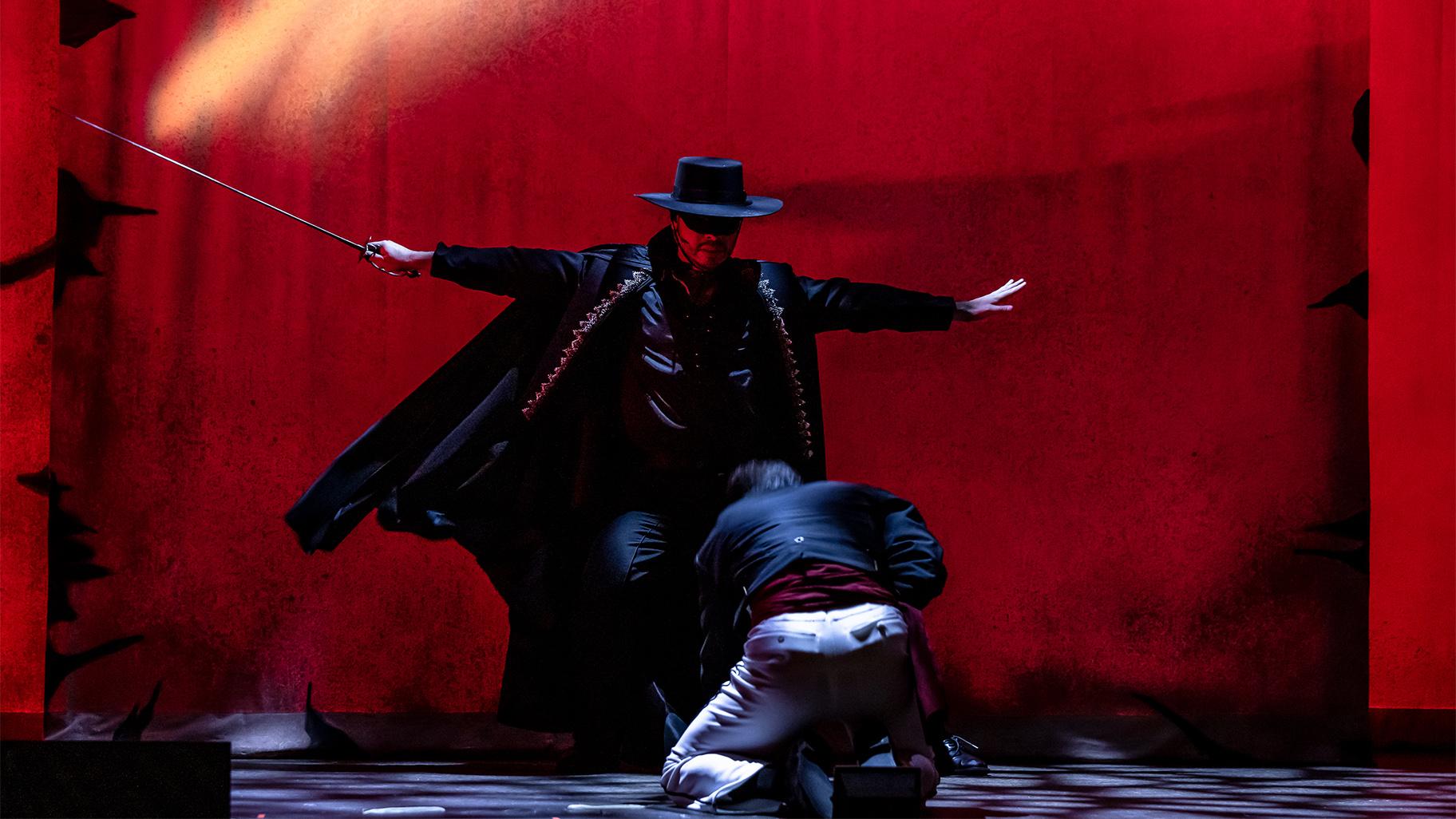 No doubt about it: Music Theater Works invariably takes on big, challenging shows, assembles a first-rate orchestra, and gathers large casts and skilled design teams. Its production of “Zorro: The Musical,” a show that had its world premiere in London in 2008, and is now receiving its Chicago area debut at Music Theater Works’ home base at the North Shore Center for the Performing Arts, is a case in point.

That said, despite its many virtues and ambitious grand-scale staging, strong voices, daring swordplay, flamenco gypsy dances, lavish costumes, a tale of bitter sibling rivalry, political oppression and romance, plus the rousing music of the Gipsy Kings (including the irresistible “Bamboleo”) this take on the “Zorro” story needs work.

The script, penned by Stephen Clark and Helen Edmundson (based on a novel by the esteemed writer Isabel Allende), could benefit from some serious tightening. To put it simply, the show — energetically directed by Adrian Abel Azevedo, with music direction by Justin Kono — is just too long.

The story of the fabled “masked man” is set primarily in the Spanish settlement of the early 1800s known as the Pueblo de Los Angeles. It begins as Don Alejandro (Luis A. Galvez), the aging father of Diego (Cisco Lopez), decides to send his son to Barcelona, Spain for the higher education that will prepare him to become the Pueblo’s future leader. Meanwhile, the resentful Ramon (Emmanuel Ramirez), a contemporary of Diego, grabs power, imprisons Don Alejandro, and turns into a cruel, tyrannical dictator in the colony.

Diego, who early on captured the heart of Luisa (Laura Quinones), the young woman in the Pueblo who adores him, and who he must leave behind, becomes entranced by the Spanish gypsy community he encounters in Barcelona, and by Inez (Alix Rhode), the hot-blooded flamenco dancer who pursues him, and is very different from Luisa. 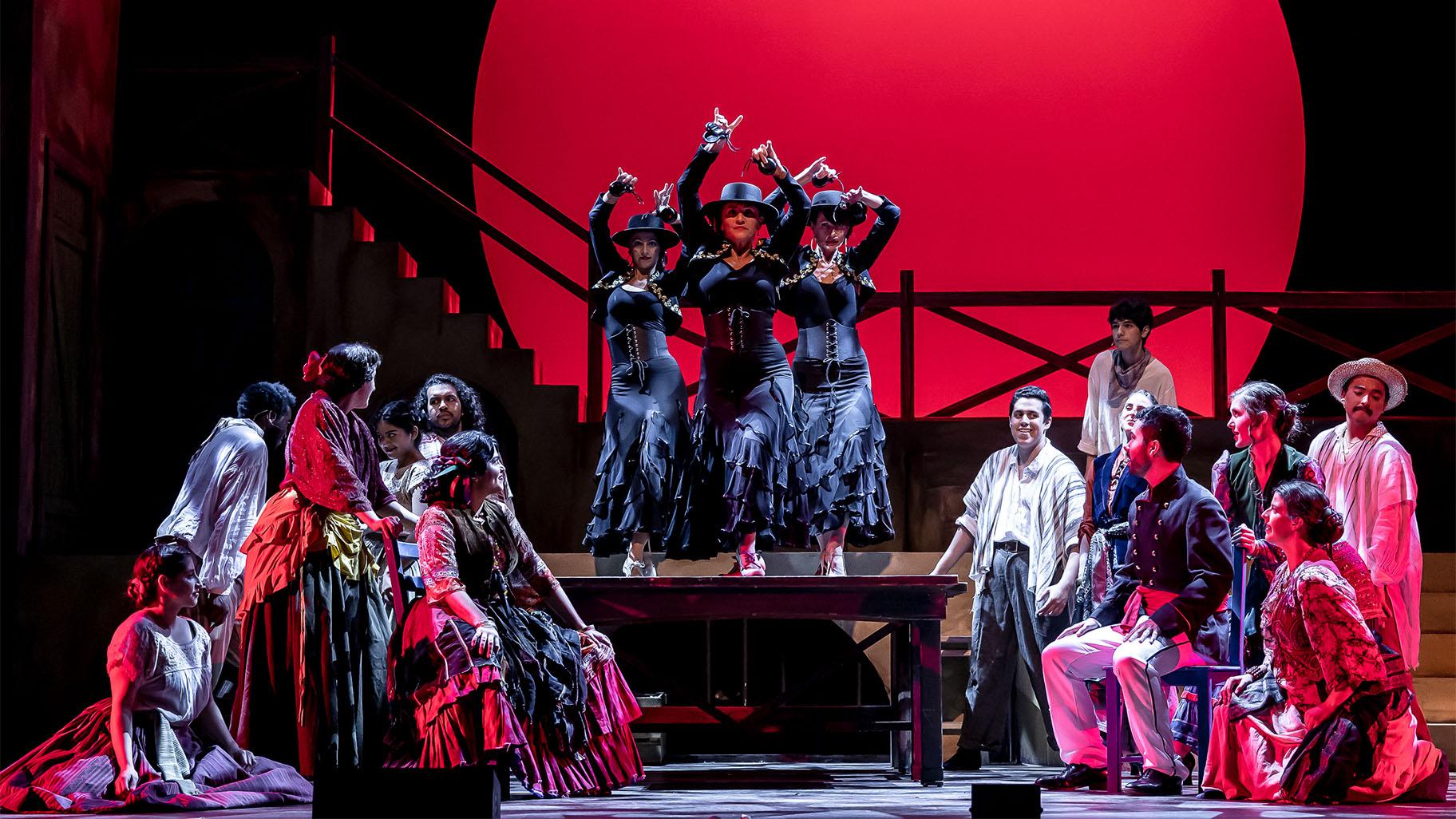 But when Diego returns to Los Angeles (along with Inez and her friends), he learns of his father’s imprisonment, and is determined to liberate both him and the citizens of the Pueblo. Disguised by what will become his emblematic black cape and mask, and by the superb swordsmanship he picked up in Spain, Diego assumes the guise of Zorro (Spanish for “Fox”), and at every possible turn tries to defeat Ramon and his soldiers. Luisa does not realize who he really is, but is attracted to the man who comes out of nowhere, dares to fight Ramon, and can never be pinned down as he attempts to rid the Pueblo of its ruthless dictator.

As Diego/Zorro, Lopez is tireless as he fights injustice, wields his sword against multiple enemies, and tries to deal with the two women in his life. Quinones and Rhode both have powerhouse voices and capture the very different personalities of Luisa and Inez. A trio of Flamenco dancers (Lina Bulovaite, Jocelyn Leving and Karla Tennies Koziura) is superb, with choreography by Luis Beltran Urena. Nick Sandys’ fight choreography is full of derring-do. And Diego Salcedo’s onstage guitar work sets the mood for many scenes.

As Ramon, Ramirez captures the spirit of a cold-blooded dictator, Galvez suggests the wisdom and forbearance of a man who has seen it all, and J. Christian Hill deftly suggests the ambivalent sentiments of Garcia, who plays Ramon’s underling.

Adriana Diaz’s character-defining costumes, and the set design by Jacqueline & Richard Penrod, capture the story’s two worlds: a long-ago Los Angeles, and the flamboyant spirit of Barcelona and its gypsy culture.

Clearly there is much to admire in this production, but it would definitely benefit from a good reworking and tightening of its script.

“Zorro: The Musical,” runs through Aug. 21 at the North Shore Center for The Performing Arts, 9501 Skokie Blvd., Skokie.

Music Theater Works has announced an ambitious 2023 season lineup including: