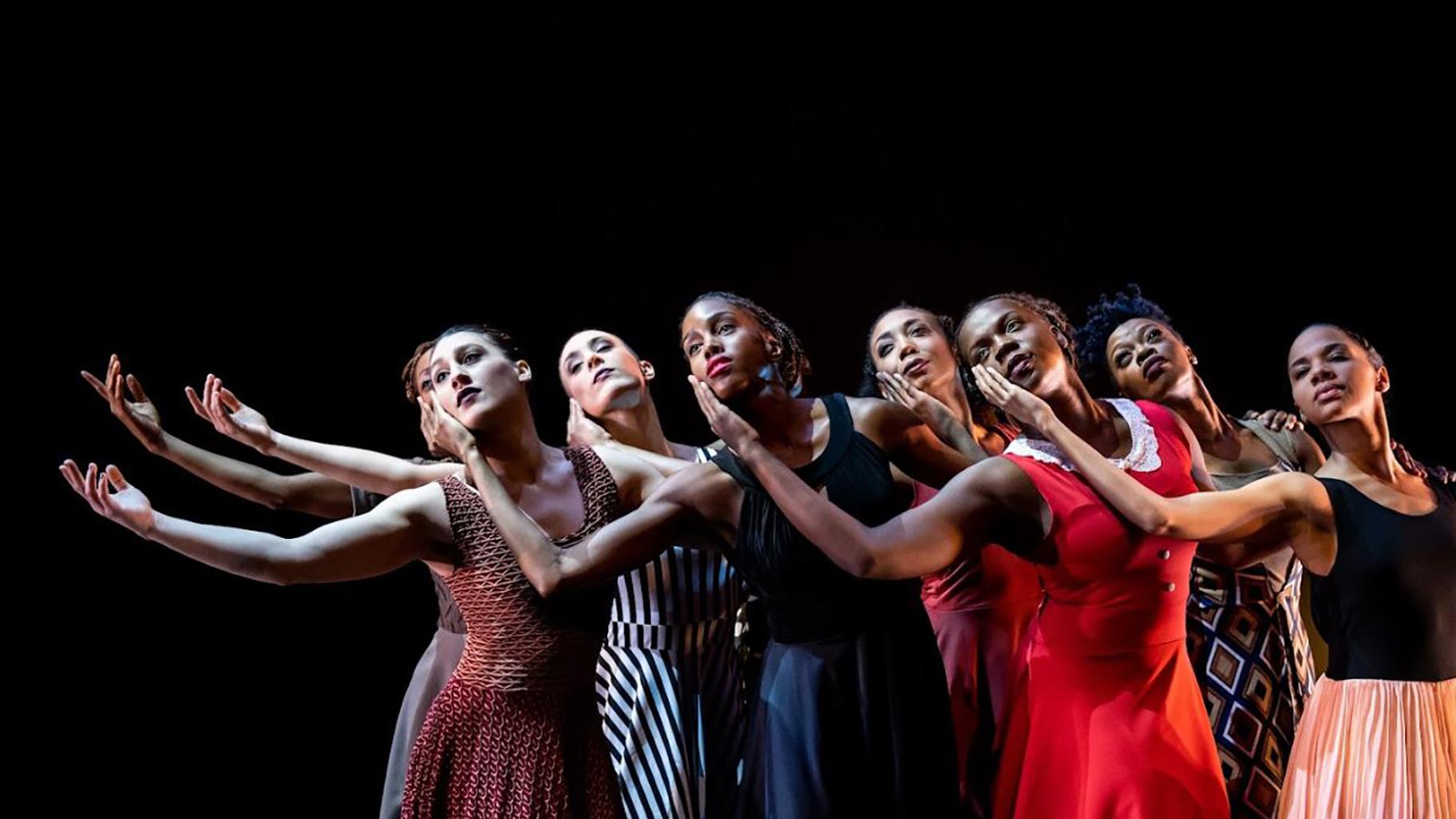 “Parallel Lives,” a stunning work in the repertoire of Deeply Rooted Dance Theater, a company that blends aspects of African American life and modern dance, and fully lives up to its use of the word “theater” in its name. (Credit Michelle Reid)

The Department of Cultural Affairs declared 2022 “The Year of Chicago Dance,” a much-deserved tribute to the city’s ever-expanding, stylistically wide-ranging dance community.

Saturday evening’s Dance for Life program at the Auditorium Theatre served as an invaluable example of what a treasure that community has become. And the annual benefit extravaganza — a grand showcase of the city’s impressive range of talent and styles — was driven by an even more crucial goal: to raise money for The Dancers’ Fund, a charitable organization that provides invaluable financial support for the dance community’s critical health care needs.

This year’s program marked the benefit’s return after the pandemic’s serious impact on an intensely physical art form. And it might just have been its very best, featuring performances by seven exceptional companies. The traditional finale was a new work superbly choreographed by Randy Duncan.

It all began with a bang, literally, as a group of thrilling drummers (John Chapman, Deshon Newman, Jabulani Spraggins and Eric Thomas) collaborated with NAJWA Dance Corps (a company devoted to dance from the African-American diaspora), and set a powerful beat for “Guinea Fare” and “Sensore,” two galvanic works choreographed by Mouminato Camara, a specialist in the dance of Guinea. It was performed with great energy and exuberance by a predominantly female ensemble of ten dancers dressed in vividly hued costumes. 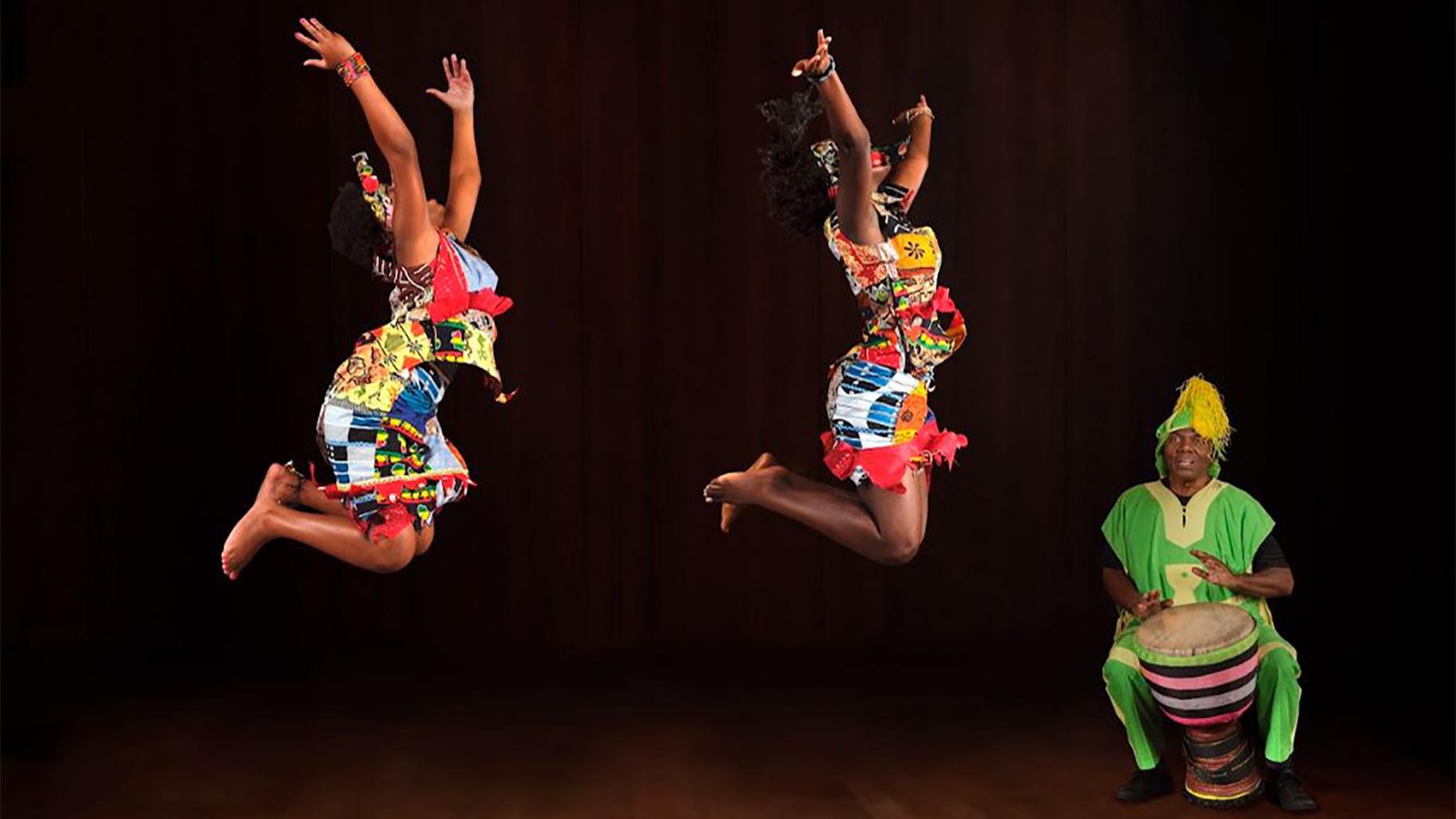 a group of thrilling drummers (John Chapman, Deshon Newman, Jabulani Spraggins and Eric Thomas) collaborated with NAJWA Dance Corps (a company devoted to dance from the African-American diaspora), and set a powerful beat for “Guinea Fare” and “Sensore,” two galvanic works choreographed by Mouminato Camara, a specialist in the dance of Guinea.

Next up was Giordano Dance Chicago performing Ray Mercer’s “Shirt off My Back,” an emotionally intense and expertly performed work for 10 dancers set to modernist music by Max Richter, Olafur Arnolds and Bongi Duma. Throughout it captured the tumultuous push/pull dynamics of male/female relationships, with a notably intense and feverishly executed pas de deux at its core.

In “Us vs. Them,” choreographed by Annie Franklin, and set to the turbulent music of Man from Sol and Jonah K, the ten dancers of Chicago Dance Crash exhibited the company’s combative streetwise style with choreography marked by the suggestion of aggressive gang-like confrontation, competitive breakdancing, and acrobatic hip-hop moves.

And then it was on to “Parallel Lives,” a stunning work in the repertoire of Deeply Rooted Dance Theater, a company that blends aspects of African American life and modern dance, and fully lives up to its use of the word “theater” in its name. Choreographed by Gary Abbott, a co-founder of the company, and set to a powerful original score by Evangelos Spanos, the piece is a stunning, emotionally intense look at the lives of seven women (in colorful dresses designed by Carolyn Mecca Cherry), with one of these women in a dreamy solo celebrating life, and then the others suggesting the grueling physical labor they must do. The dancers (Heather Cagle, Emani Drake, Cherae Grimes, Rebekah Kuczma, Taylor Ramos, Nyemah Stuart and Alyssa McCallum) were superb.

A dramatic change of style came with “Elegie,” a fiercely challenging pas de deux choreographed by Yoshihisa Arai, a dancer with the Joffrey Ballet. Set to music by Sergei Rachmaninoff, it began with pianist Jorge Ivars quite dramatically taking his seat at a grand piano. And as the music began two of the Joffrey’s leading dancers, Dylan Gutierrez and Anais Bueno (in a beautiful black tulle gown designed by Arai) arrived on stage to perform a feverish love duet full of breathtaking lifts and fierce emotion. 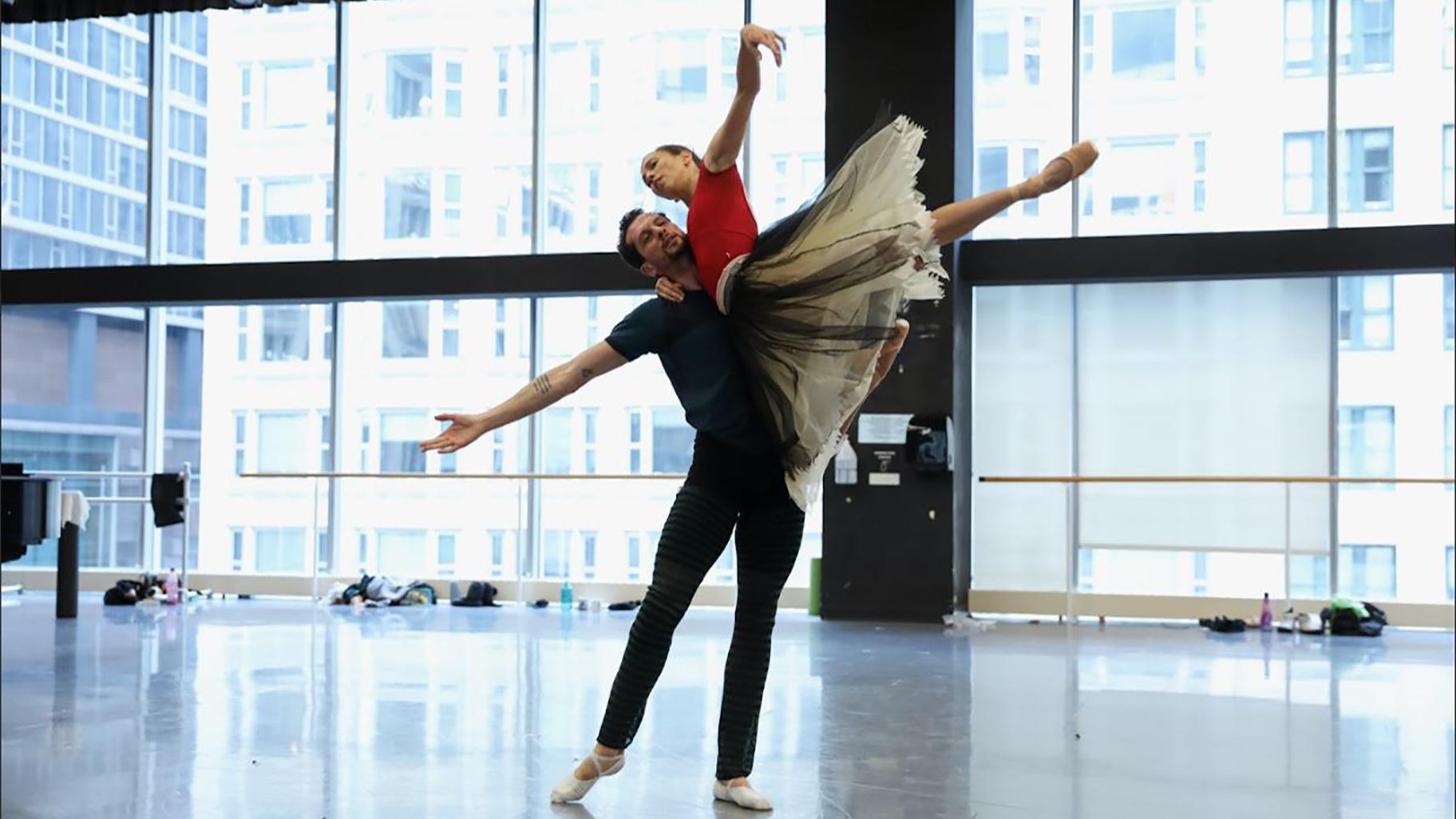 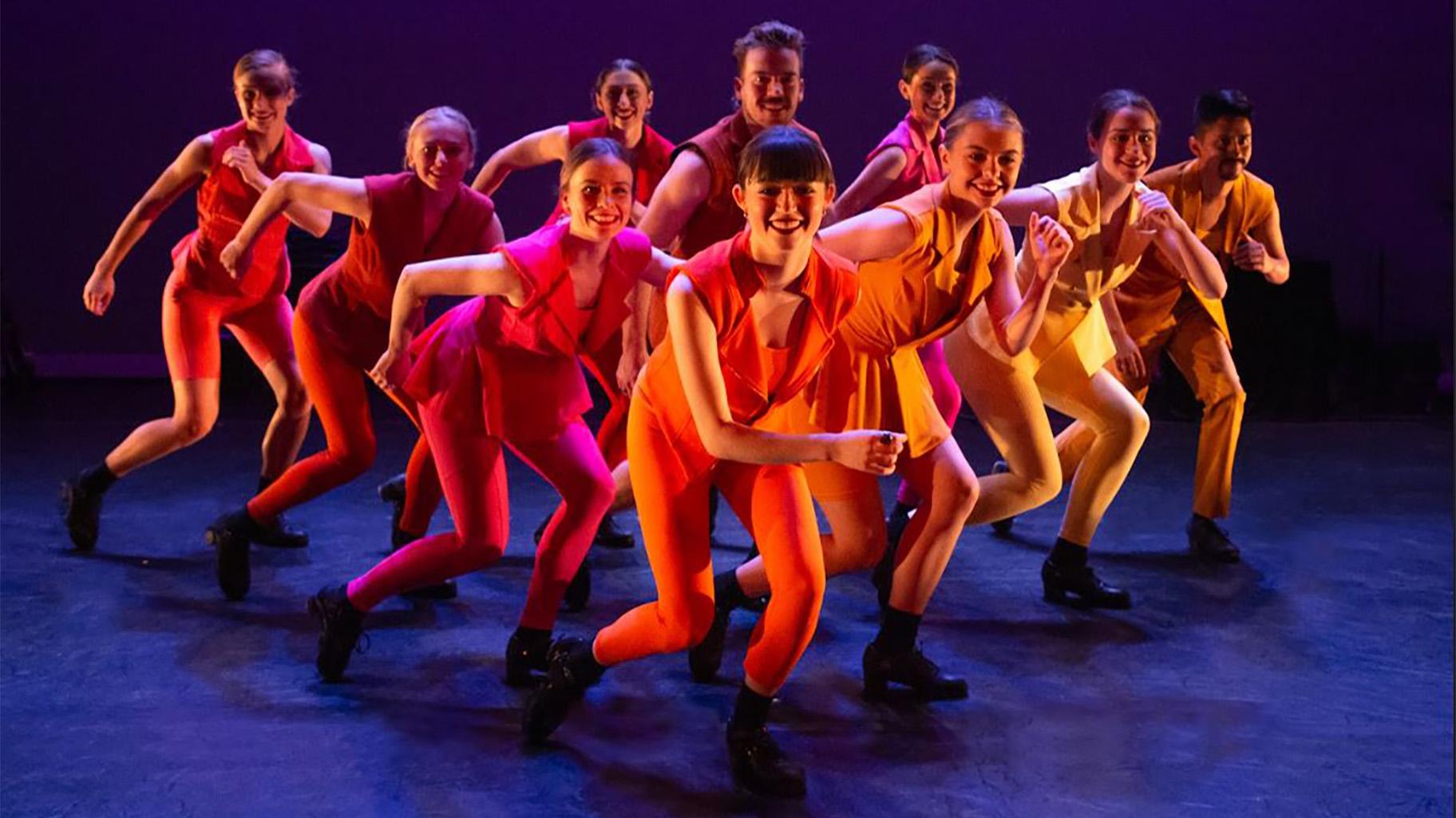 A lushly lyrical mood was then conjured by Ensemble Espanol Spanish Dance Theater’s “El Baile de Luis Alonso,” a work choreographed by Irma Suarez Ruiz, the company’s artistic director. Set to the music of the Seville-born composer Geronimo Gimenez, it unfolds against a ballroom-like backdrop, with an ensemble of elegantly dressed dancers swirling around the floor and clicking castanets.

Last but not least, in what has been a long-standing tradition for Dance for Life’s programs, Randy Duncan (who has served as the Head of the Dance Department at the Chicago Academy of the Arts since 1995) choreographed a world premiere piece for the evening’s grand finale. And, as usual, it was performed by a large gathering of dancers (including members of a wide array of companies, as well as freelancers) who came together for this event in the most seamless way.

Titled “Never Enough,” Duncan’s fluid, haunting work, was set to original music by Benj Pasek and Justin Paul (who wrote the score for the musical “Dear Evan Hansen”), and featured the Stellenbosch University Choir of South Africa, with additional music by Andy Mitran, and vocals by Annie Brennan Mitran and Louise Mitran.

With a dark blue backdrop suggesting a delicately star-speckled night sky (and with lighting by Margaret Nelson and costumes by Luis Razo), Duncan’s work was winningly performed by 13 expert dancers and featured a standout turn by Joseph Massarelli, a Chicago-trained dancer now a member of the Dutch National Ballet. The piece also subtly conjured a beautiful sense of the place of human life in the universe.

Luckily, the full “Dance for Life” program was recorded by HMS Media. And I hope it can find far wider exposure than this single performance, and introduce potential audiences to the many facets of Chicago’s formidable dance scene.

One final note: Chicago’s renowned Hubbard Street Dance Company was missing from this year’s lineup because it was already committed to performances at the fabled Jacob’s Pillow Festival in Massachusetts.

Note: This article was updated to correct the spelling of Gary Abbott and Evangelos Spanos. It has also been updated to reflect that Carolyn Mecca Cherry is the designer of the dresses worn by Deeply Rooted Dance Company.