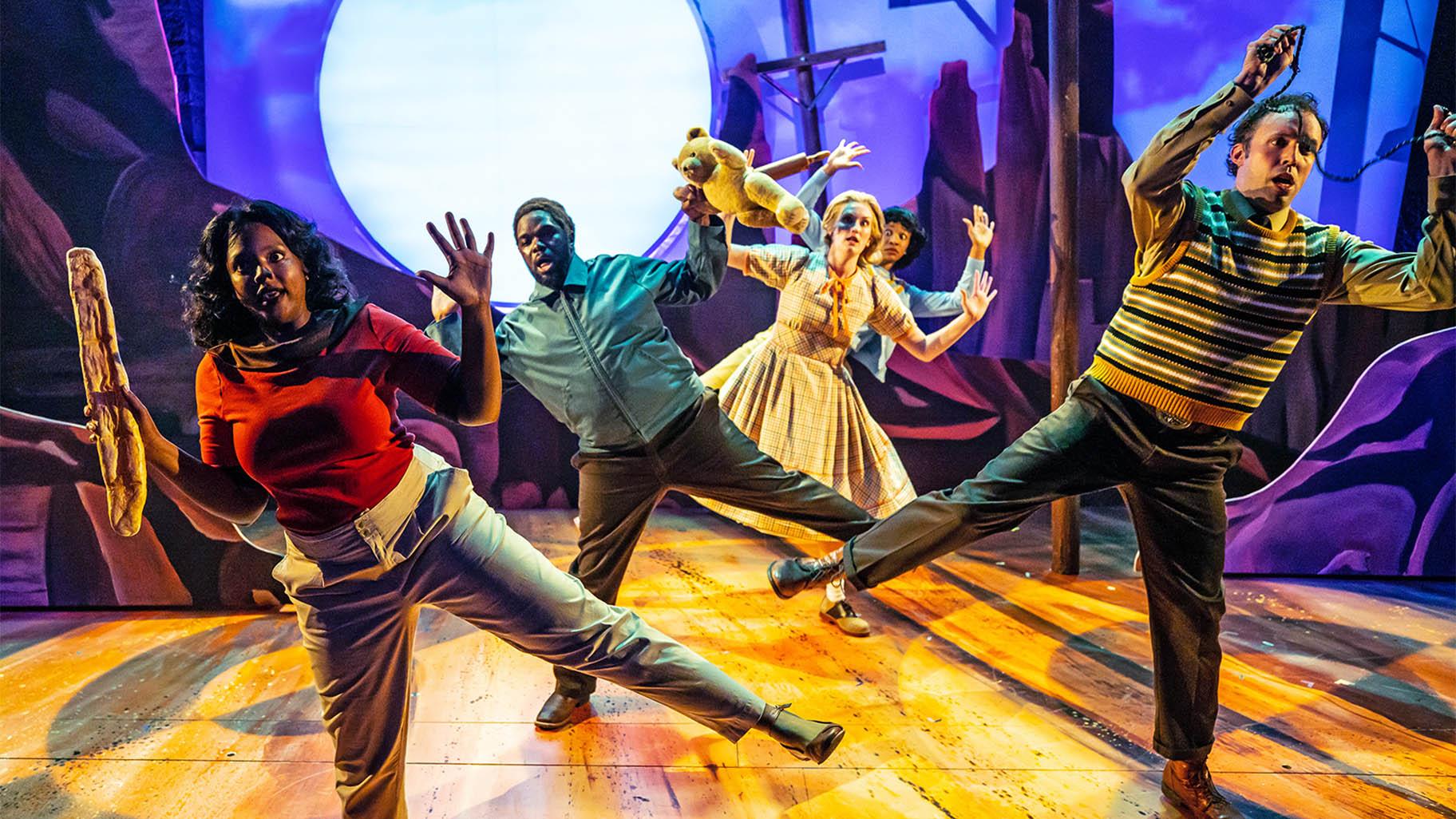 I should confess at the outset that I’ve never been a fan of sci-fi. Instead, I find the still impenetrable mysteries of the universe being probed by “genuine science” to be far stranger and more daunting.

But “It Came From Outer Space,” the zany new musical now in its world premiere at the Chicago Shakespeare Theatre, is so crazily “in and out” of this world that it is irresistible. And, if you just happened to have read about NASA’s recently announced plan to fund a study of UFOs, well, what more can be said aside from the fact that one of the most amusing studies of that phenomenon can now be found on the stage of a theater.

It's based on the iconic 1953 Universal Pictures film that was inspired by the writings of sci-fi master Ray Bradbury (who grew up in Waukegan, Illinois as well as in the desert city of Tucson, Arizona). This 90-minute musical is the creation of Joe Kinosian (book and music) and Kellen Blair (book and lyrics). And it winningly (and comically) chronicles the bizarre scientific and romantic adventures of John Putnam (played with just the right nerdy edge by Christopher Kale Jones), an astronomer with big city roots who has arrived in the remote desert town of Sand Rock, Arizona, where he is convinced that an alien spaceship has landed.

The town is populated by its fair share of doubters and eccentrics who are not exactly welcoming to Putnam. And complicating matters is that in addition to pursuing his scientific quest Putnam, is pursuing a serious relationship with Ellen Fields (winningly played by Jaye Ladymore), an attractive, clear-minded teacher to whom he is seriously attracted. 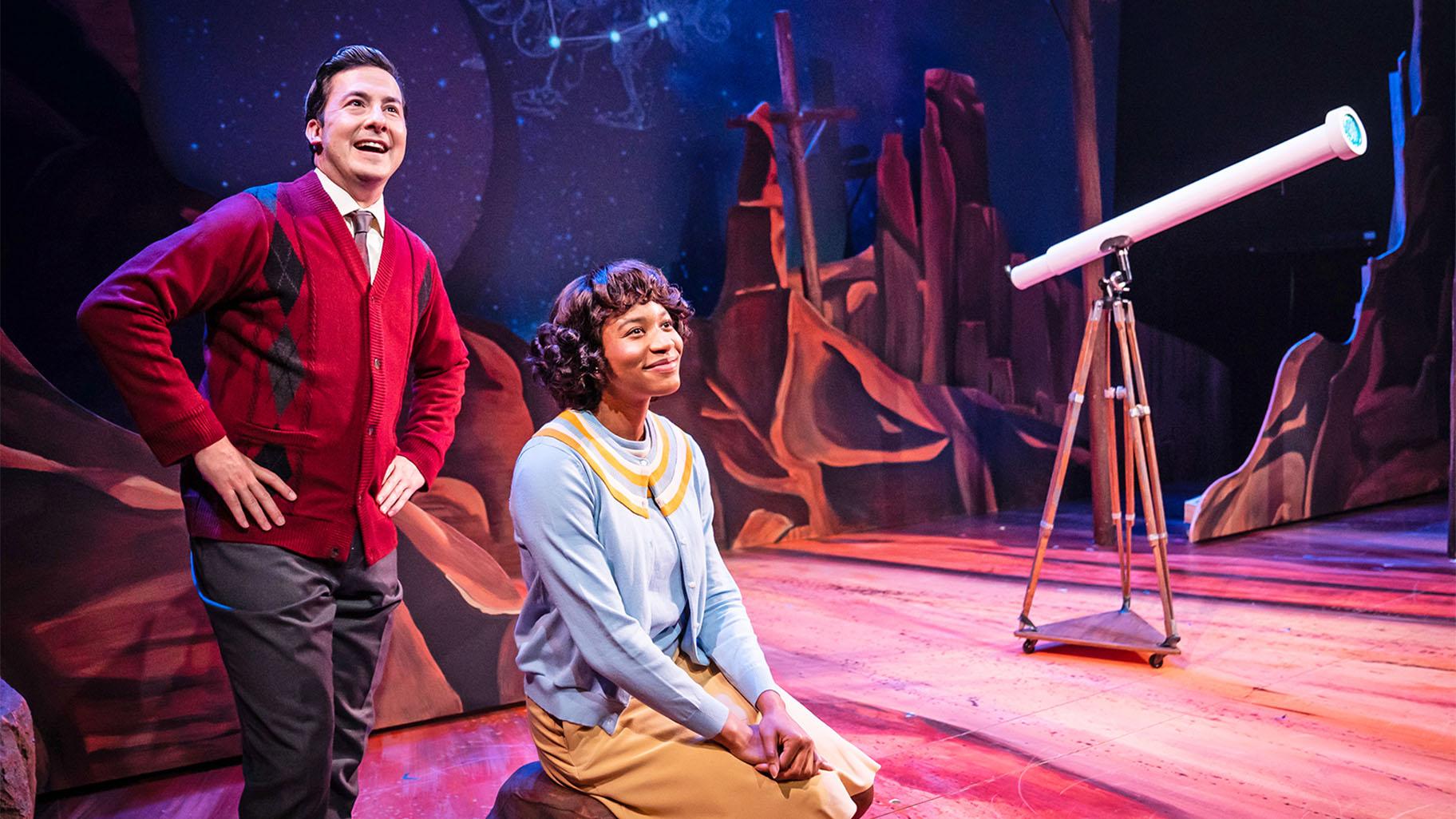 Although Putnam is judged to be a city-bred quack by most of the citizens in this remote town he is convinced that he is on to something, and wants to learn more about it. And, as it turns out, a slew of crazy extraterrestrial visitors do make their presence known in one way or another. What’s more, these wacky “visitors from outer space” are played by the same actors portraying the townspeople. It’s a most ingenious way to drive home the show’s crucial point which is that in some way, shape, or form we are all extraterrestrials and that we must make peace with one another.

The uniformly brilliant cast of six, superbly directed by Laura Braza, is richly enhanced by Mieka Van Der Ploeg’s wonderfully bizarre costumes (a description of which I will not divulge here); eye-popping video/projection design by Rasean Davonte Johnson and Michael Salvatore Commendatore; and sound effects by Nicholas Pope, and the work of a slew of other designers. Also top notch is the show’s four-man orchestra led by keyboardist Kevin Reeks, and including David Victor, Sean McNeely and David Orlicz, that moves through the show’s spirited score with great zest. (One of the songs, the spot-on, laughter-inducing “I Can’t Figure Out Men,” is sure to have an illustrious life all its own.)

But I have saved the very best for last. In addition to the two actors who play John and Ellen, there are four actors who play both the citizens of the town and the otherworldly “visitors.” And they are simply sensational, making split-second radical shifts in body language and vocal texture that must be experienced rather than described.

Alex Goodrich plays Sheriff Matt Warren, a high-strung guy seriously interested in Edith and wildly jealous of Putnam. Jonathan Butler-Duplessis plays his more good-natured co-worker and friend. And both actors morph brilliantly into those other “beings” from outer space. Sharriese Y. Hamilton plays Heckie, an aggressive reporter, while Ann Delaney plays Maize, the somewhat bonkers older lady in town. And they, too, can transform on a dime, changing into extraterrestrials full of wonderful verbal and physical ticks. 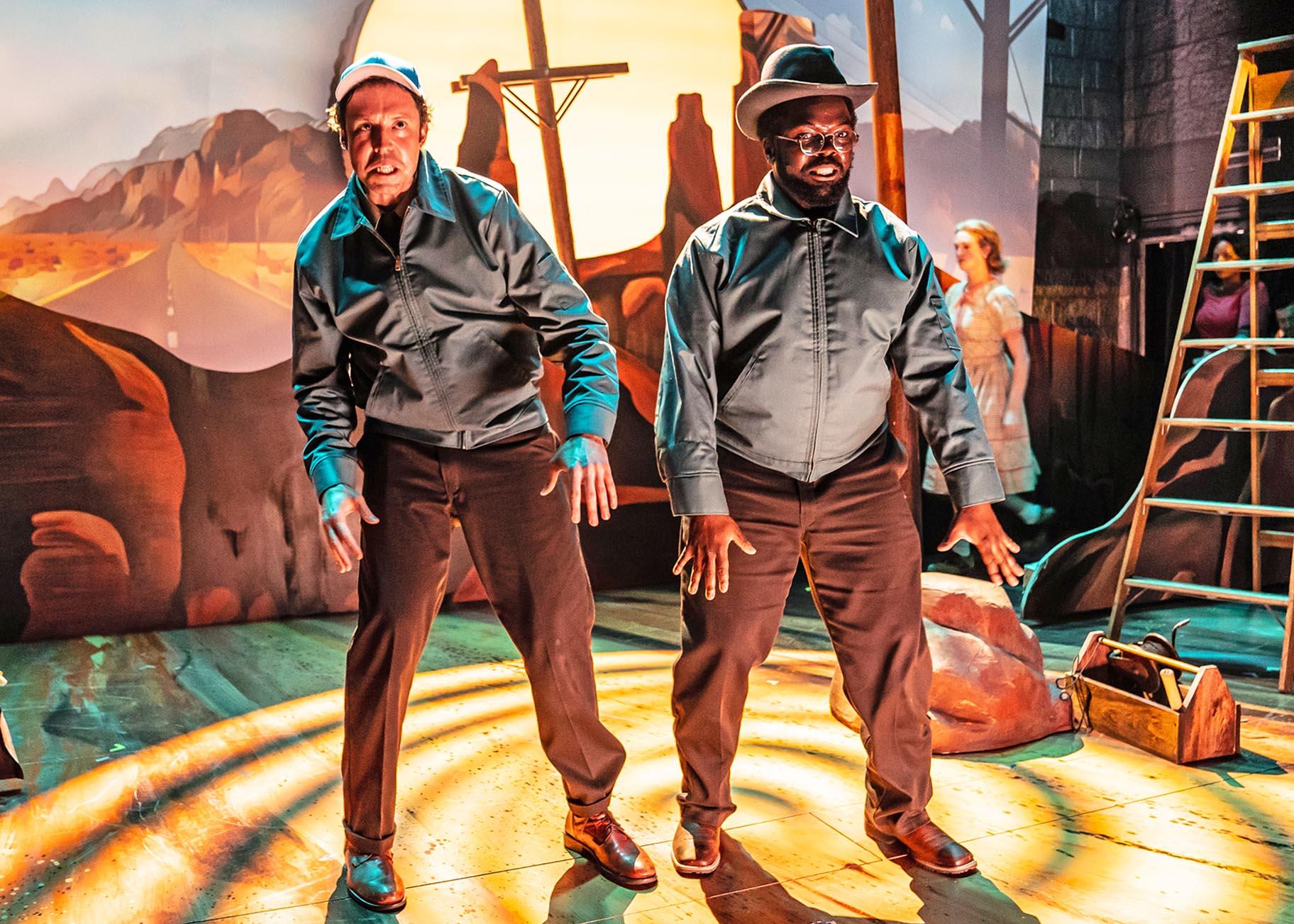 The moral of the story? These aliens from outer space may very well be our earthly alter egos. And while we might think of them as strangers — as visitors from outer space — they might just be the unresolved parts of ourselves. In fact, as one good look at the current state of the world might suggest, we would do very well to reconcile ourselves to making peace with them.

One final note: This show works ideally in the intimate space of Chicago Shakespeare’s Upstairs Theatre. And I hope that the many outside producers who are said to be coming to Chicago to see this production might sense that this musical will work best in a similar space, and that it is bound to enjoy a long run in such an Off Broadway house.