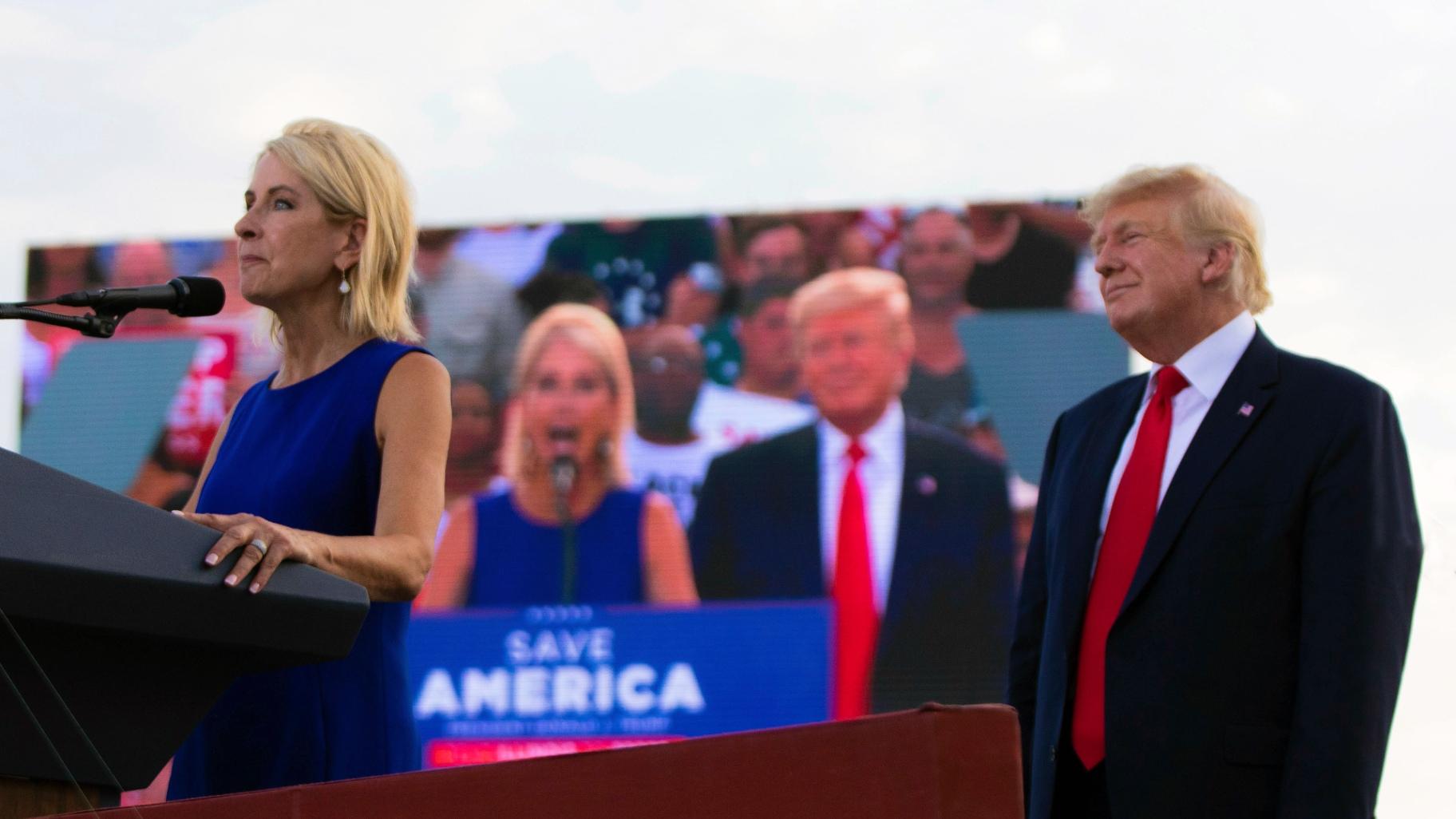 U.S. Rep. Mary Miller, of Illinois, speaks as former President Donald Trump stands behind her on stage at a rally at the Adams County Fairgrounds in Mendon, Ill., Saturday, June 25, 2022. (Mike Sorensen / Quincy Herald-Whig via AP)

Miller’s spokesman said the Illinois Republican had intended to say the decision was a victory for a “right to life.” The line as delivered was out of step with the disproportionate impact the repeal of abortion rights will have on women of color.

Miller is running for reelection in the state’s newly redrawn 15th Congressional District against GOP Rep. Rodney Davis with the former president’s blessing. She had been invited on stage to speak by Trump, who held the rally in Mendon, Illinois, to turn out the vote ahead of the state’s Tuesday primary.

“President Trump, on behalf of all the MAGA patriots in America, I want to thank you for the historic victory for white life in the Supreme Court yesterday,” she said, drawing cheers from the crowd.

Miller spokesman Isaiah Wartman told The Associated Press that it was “a mix-up of words.”

Her campaign noted that she is the grandmother of several nonwhite grandchildren, including one with Down syndrome.

The freshman congresswoman, who was among those who voted to overturn the results of the 2020 election, previously came under criticism for quoting Adolf Hitler.

“Hitler was right on one thing. He said, ’Whoever has the youth has the future,’” Miller said in a speech last year, according to video posted by WCIA-TV. She later apologized after Democrats in Illinois called for her resignation.

The rally came as some elements of the far right have pushed the “great replacement theory,” a racist ideology that alleges white people and their influence are being “replaced” by people of color. Proponents blame both immigration as well as demographic changes, including white birth rates.

During the rally, Trump took a victory lap for the Supreme Court’s bombshell ruling Friday ending the constitutional right to abortion. The three conservative justices he appointed all voted in favor.

He noted that in 2016, he promised to appoint judges who opposed abortion rights.

Trump at the rally also endorsed Republican Darren Bailey, who is running to become the party’s nominee for governor.