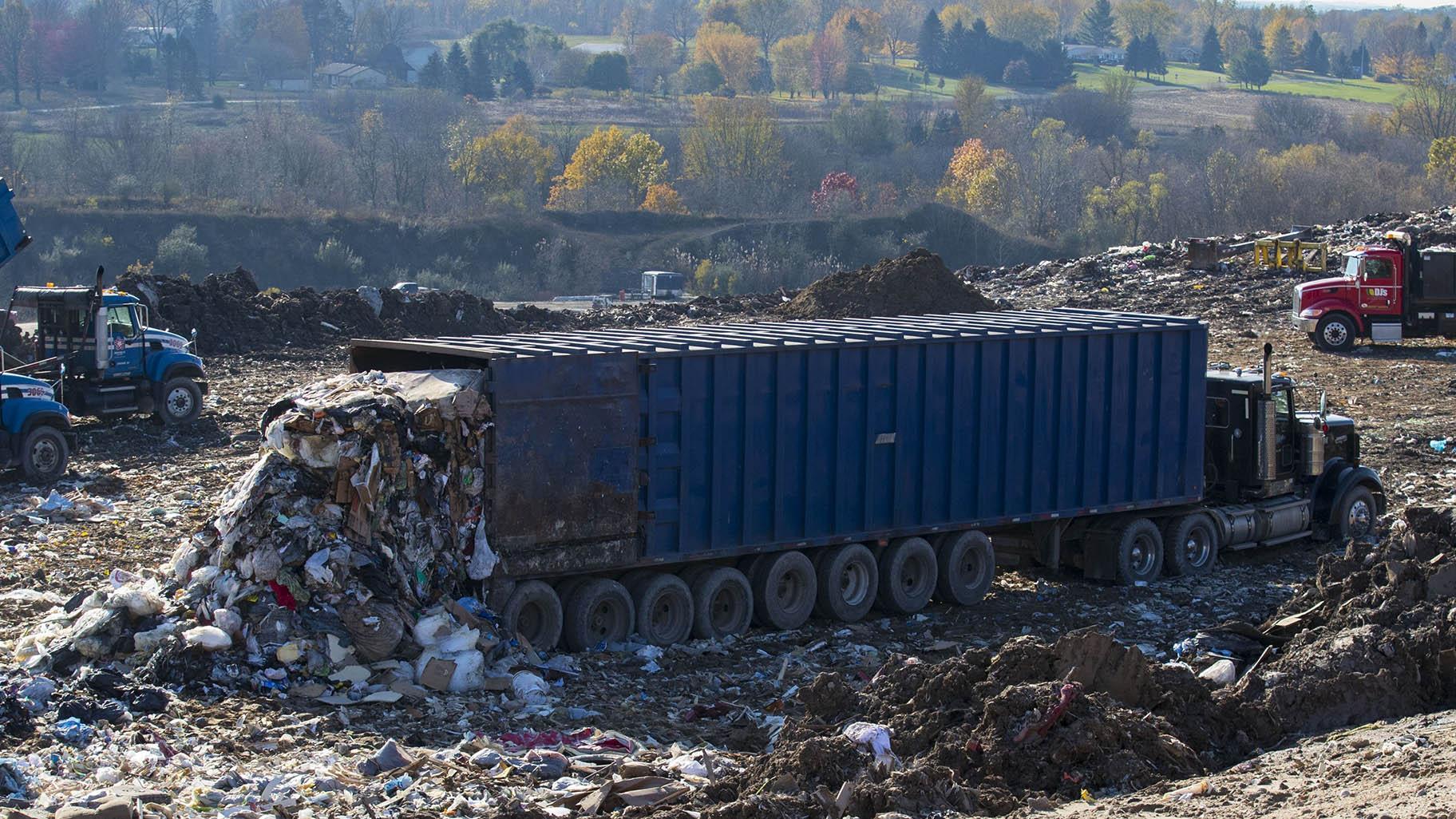 A truck drops off a load of garbage at the South Kent Landfill in Byron Township, Mich., on Wednesday, Nov. 8, 2017. (Mike Clark / The Grand Rapids Press via AP, File)

The preliminary airborne level of methane jumped 17 parts per billion, hitting 1895.7 parts per billion last year. It’s the second year in a row that methane rose at a record rate with 2020 going up 15.3 ppb over 2019, according to NOAA. Methane levels are now way more than double pre-industrial levels of 720 parts per billion, said Lindsay Lan, an atmospheric scientist at NOAA and the University of Colorado.

Methane is a big contributor to climate change, leading to about a 0.9 degrees Fahrenheit (0.5 degrees Celsius) increase in temperature since the 19th century, according to the Intergovernmental Panel on Climate Change. Carbon dioxide has caused about 50% more warming than methane.

Methane is about 25 times more powerful at trapping heat than carbon dioxide. But it only lasts nine years in the air instead of thousands of years like carbon dioxide, Lan said. Because it doesn’t last in the air long, many nations last year agreed to target methane for quick emission cuts as low hanging fruit in the global efforts to limit future warming to 1.5 or 2 degrees Celsius (2.7 or 3.6 degrees Fahrenheit) since pre-industrial times. The world has already warmed 1.1 to 1.2 degrees Celsius (about 2 to 2.2 degrees Fahrenheit).

“To limit warming to well-below 2C this century, we need to cut our methane emissions dramatically, and today we are clearly moving in the wrong direction,” climate scientist Zeke Hausfather of Stripe and Berkeley Earth said in an email. “Cutting methane has strong immediate climate benefits, as it is the only greenhouse gas for which emission reductions can quickly cool the climate (versus slowing or stopping the rate of warming).”

NOAA has been tracking methane levels in the air since 1983.

Lan said early signs point more to natural causes for the methane jump, because of La Nina, the natural and temporary cooling of parts of the Pacific that change weather worldwide, but it’s still early. La Nina tends to make it rain more in some tropical regions and the two years in a row of record increases during La Nina points to methane escaping from wetlands, she said.

Methane is also a natural gas and an increasingly used energy source. Much methane comes out of livestock and human-generated agriculture, as well as from landfills. Scientists also fear future release of trapped methane under the ocean and in frozen Arctic land, but there's no indication that's happening on a large scale.

The key question is whether this increasing trend could add to climate change problems or is a pandemic-related blip due to the decrease in methane-destroying nitrous oxides from less car and industrial pollution, said Stanford University climate scientist Rob Jackson.

“It seems to be something else instead of COVID,” Lan said. She figures high levels in 2020 and then even higher levels in 2021, when lockdowns were eased, point away from a pandemic effect.

Both fossil fuels and agriculture are key in methane increases, Howarth said. But he said, “my research strongly points toward fossil fuels as being the largest cause of the increase since 2008, with increase emissions from shale gas production from fracking in the U.S. being a major part of that.”

In a study last year, Lan looked at the chemical isotopes to isolate where steady increases in methane emissions since 2006 may be coming from. The chemical signature pointed away from fossil fuels as the bigger guilty party and more toward either natural wetland emissions or agriculture, she said.

“Our data show that global emissions continue to move in the wrong direction at a rapid pace,” said NOAA chief Rick Spinrad said in a statement.