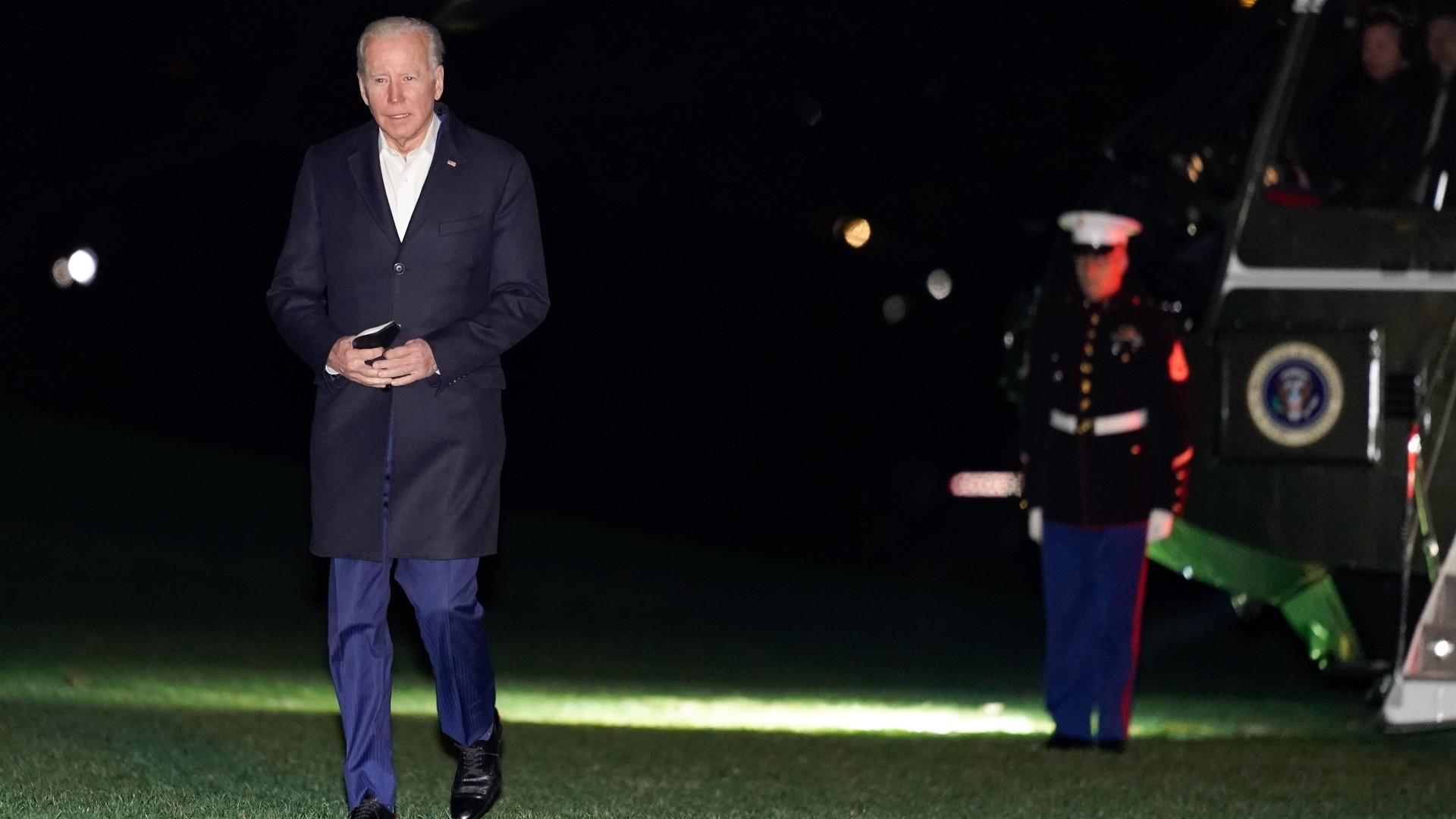 President Joe Biden arrives on Marine One on the South Lawn of the White House, early Sunday, March 27, 2022, in Washington, after a four-day trip to Europe. (AP Photo / Carolyn Kaster)

WASHINGTON (AP) — With the last nine, unscripted words of an impassioned speech about Russia's aggression in Ukraine, President Joe Biden created a troubling distraction, undermining his effectiveness as he returned home to face restive Americans who strongly disapprove of his performance on issues that matter most to them.

His comment that Russia’s Vladimir Putin “cannot remain in power” — an assertion that his aides were forced to quickly clean up — overshadowed his larger message of solidifying the Western coalition that’s confronting Moscow.

It punctuated another frustrating moment for an administration that’s struggled to regain its footing — and the American electorate’s support — in the face of an ongoing pandemic, escalating inflation and an increasingly complicated foreign policy crisis that raises the specter of nuclear conflict.

Although he’s forged a united front to punish Russia with sanctions for the invasion of Ukraine, polls show Americans feel no better about his leadership as the bloody war continues. Meanwhile, Democrats are in danger of losing control of Congress in November’s midterm elections, leaving Biden with limited opportunities to advance a progressive domestic agenda that remains stalled.

The president is on the verge of securing the confirmation of the first Black woman, Ketanji Brown Jackson, on the U.S. Supreme Court, yet there’s no clear path forward for him to fulfill other campaign promises around voting rights, criminal justice reform and fighting climate change. While polls show that Jackson is broadly supported by Americans, it hasn’t helped improve Biden’s standing with voters less than eight months before the midterms, which Republicans hope to frame as a referendum on the president.

The war in Russia has consumed much of the White House’s messaging bandwidth, but Biden is looking to turn the spotlight onto some of his domestic priorities this week.

He is expected to unveil a new budget proposal on Monday, which includes a renewed focus on cutting the federal deficit and a populist proposal to increase taxes on the wealthiest Americans.

If approved by Congress — far from a certainty — households worth more than $100 million — a measurement of wealth, not income — would have to pay a minimum tax of 20% on their earnings.

The added revenue could help keep the deficit in check and finance some of Biden’s domestic priorities, including expanded safety net programs. There are few if any signs of Republican support for the proposal so far, and even some Democrats have been lukewarm to the idea.

Biden’s case isn’t helped by his approval ratings. A slim 34% of Americans think Biden is doing a good job handling the economy, which is normally the top issue for voters in an election year, according to a poll released Thursday by The Associated Press-NORC Center for Public Affairs Research.

His contentious assertion about Putin in his Warsaw speech did little to help things. The White House rushed to clarify that Biden wasn’t actually calling for “regime change,” but by the next day it became clear that the dramatic statement had produced some of the first overt cracks in unity among NATO nations that had just convened in Brussels for an emergency meeting.

Some leading Western European allies, including France and Germany, tend to be more cautious than the U.S. about how to confront Russia. Until Saturday night, Biden had calibrated his words carefully.

“I wouldn’t use those terms, because I continue to speak to President Putin, because what do we want to do collectively?” he said. “We want to stop the war that Russia launched in Ukraine, without waging war and without escalation.”

In Berlin, German Chancellor Olaf Scholz said Sunday that neither NATO nor Biden seek regime change in Russia. Asked about Biden’s remarks during an appearance on ARD television, Scholz also said Biden had not made a dangerous mistake. “We both agree completely that regime change is not an object and aim of policy that we pursue together,” the chancellor said.

Biden has enjoyed some rare bipartisan support for his handling of the Ukraine crisis. But some Republicans who have been generally supportive of his approach to the crisis chided him for his comments.

Sen. James Risch of Idaho, the top Republican on the Senate Foreign Relations Committee, dryly noted on CNN's “State of the Union” on Sunday, “Please, Mr. President, stay on script.”

Secretary of State Antony Blinken was forced to continue clarifying Biden’s speech during a trip through the Middle East, where he had intended to focus on solidifying American partnerships as the administration seeks a renewed nuclear agreement with Iran.

Speaking at a news conference in Jerusalem, Blinken said Biden meant that “Putin cannot be empowered to wage war or engage in aggression against Ukraine or anyone else.”

In case there was any doubt, Biden gave an emphatic “No!” when asked by a reporter outside of church Sunday if he was calling for regime change with the remark.

Even as Biden seemed to go too far for some allies with his speech, Ukrainian President Volodymyr Zelenskyy seemed to draw little comfort from it. He accused Western nations of lacking courage to confront Russia, and he said criticized their “ping-pong about who and how should hand over jets” and other weapons to the Ukrainian military.

The speech in Warsaw was the third, and by far most consequential, of instances from the trip where Biden’s aides needed to clean up his comments.

And then, while speaking to members of the 82nd Airborne Division soldiers recently deployed to Poland, Biden seemed to suggest they would be going to Ukraine. Speaking about the bravery of Ukrainians, Biden said: “Look at how they’re stepping up. And you’re going to see when you’re there.”

Afterward, the White House reiterated that Biden had no intention of sending troops into Ukraine, something the president has insisted since the beginning of the conflict.

While running for office two years ago, Biden repeatedly told voters that “the words of a president matter,” and he promised that his foreign policy experience would serve the country well on the international stage.

There’s little doubt that Biden has been able to maintain unusual unity among allies during this war. But by speaking with more passion than caution — particularly in his speech in Warsaw — Biden has also reminded Americans of his proclivity for misstatements at a precarious time for his presidency.

Just 26% of Americans have faith that Biden can manage a crisis or the military, according to last week's AP-NORC poll. There’s also been a mixed response to Biden’s approach to Russia. Although Americans have been skeptical of getting involved in another foreign crisis, they’ve also watched with horror as Putin continues to raze Ukrainian cities despite an array of punishing sanctions.

Only 36% said his approach has been “about right,” while 56% said Biden has not been tough enough on Russia.