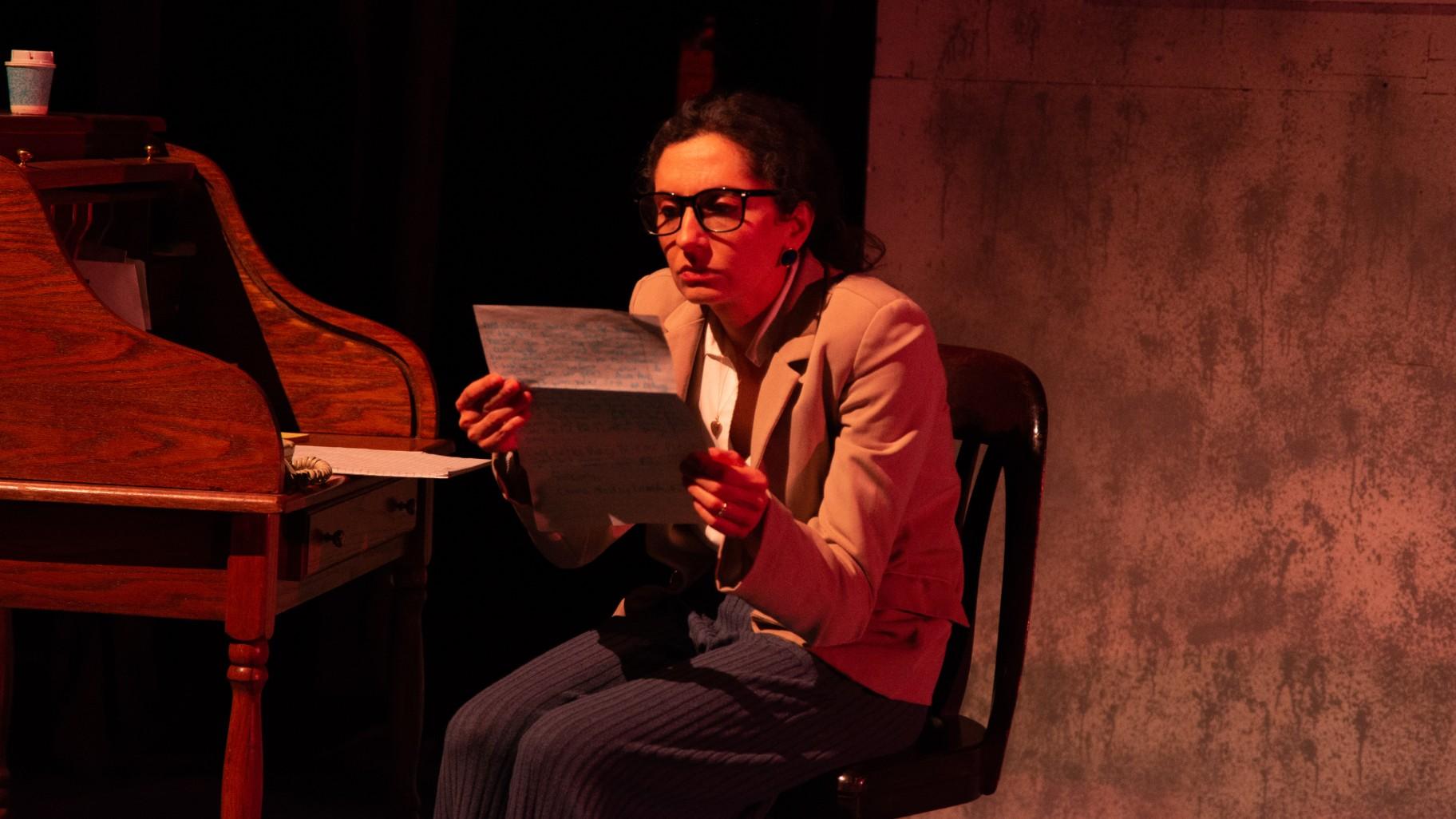 Talia Langman leads the cast as Ruth Bader Ginsburg in “When There are Nine” at Pride Arts Center. (Credit: Tom McGrath / TCMcG Photography)

And while some might still be criticizing her for not stepping down from her Supreme Court seat in time for a Democratic president to replace her on the bench, the “Notorious R.B.G.,” better known as Ruth Bader Ginsburg, hung on for dear life until her death in 2020 at the age of 87.

A physically tiny but mighty woman, who was born into a Jewish family in Brooklyn, she fought the battle for women’s rights from her university days on, despite countless barriers. Ginsburg was a relentless spirit who spent the final two decades of her life battling five bouts of cancer while at the same time making the case for gender equality, abortion rights, the rights of workers and many other issues.

She also reveled in her long and happy marriage to Marty Ginsburg, which began with a youthful romance that might be described as “mutual love at first sight,” and that grew into a decades-long relationship with a man who fully appreciated and supported his wife’s relentless drive, and with whom she raised two children.

All that, and more, is the subject of “When There are Nine,” Sally Deering’s 90-minute play that is now receiving its world premiere at the Pride Arts Center in a production directed by Sam Hess. Rather than taking the straight and narrow biographical approach to the story, Deering, who calls her work “a dream play,” imagines what might have been going through Ginsburg’s mind on the day of her death – Sept. 18, 2020 – which just happened to be Rosh Hashanah, the Jewish New Year.

At times curled up on a couch, or walking with the help of a wheeled cane and attended to by a “substitute” caretaker who refuses to let her indulge her sweet tooth, Ginsburg recalls the death of her beloved mother when she was 17 and just about to head off on a full scholarship to Cornell University. She also looks back on her time at both the Harvard and Columbia law schools, her difficulty getting jobs for which she was more than qualified (but rejected because of gender), and most tellingly perhaps, the disrespectful way in which an interviewer repeatedly called her “Mrs. Gibson” instead of “Ginsburg,” despite her correction.

All in all, hers was a life of sorrows, frustrations, disappointments, insults, immense achievements, groundbreaking triumphs and great joys. And many of those most vivid moments from Ginsburg’s past are touched on briefly but memorably by Deering, and captured by a cast ideally chosen by Hess.

Actress Talia Langman not only plays Ginsburg to perfection, but her physical resemblance is uncanny. Like Ginsburg, she is petite and of extremely slender build (she also is quite young), but she effortlessly morphs from the justice’s youth and early career days into the increasingly fragile, older, but ever feisty figure so emblematic of Ginsburg’s years on the Supreme Court, from the moment of her nomination by President Bill Clinton in 1993, until her death.

Both Gabriel Estrada’s portrayal of Ginsburg’s adoring and supportive husband, and Nicholia Aguirre’s forthright portrayal of Gabby, her caretaker, are spot on, but would benefit from stronger vocal projection at moments.

A chorus of seven supporting actresses (Shannon Bachelder, Zoe Nemetz, Caitlin Wolfe, Sarah Kinn, Ginger De Leon, Hannah Boutilier and Ashlyn Seehafer) assume a vast variety of roles throughout, and don the black robes of the Justices at crucial moments. And while there are a few very brief bits of operatic music to be heard during the play, there is no mention of Ginsburg’s passion for that art form, or her friendship with Justice Antonin Scalia, with whom she shared few if any legal views, yet bonded over opera.

By the end of “When There Are Nine” you might well find yourself wondering about what final thoughts might be passing through your own mind if you are still well aware enough of your situation. What might you think back on, and how might you imagine the final step? And most of all, would you see to it that you have your last bite of chocolate cake?

One final note: The title of Deering’s play is a much quoted line lifted from a speech Ginsburg gave at Georgetown University in 2015 in which she said, “When I’m sometimes asked ‘When will there be enough women [on the Supreme Court]’ and I say ‘When there are nine,' people are shocked. But there’d been nine men, and nobody’s ever raised a question about that.”

“When There Are Nine” runs through March 13 at Pride Arts Center, 4139 N. Broadway. For tickets visit pridearts.org.