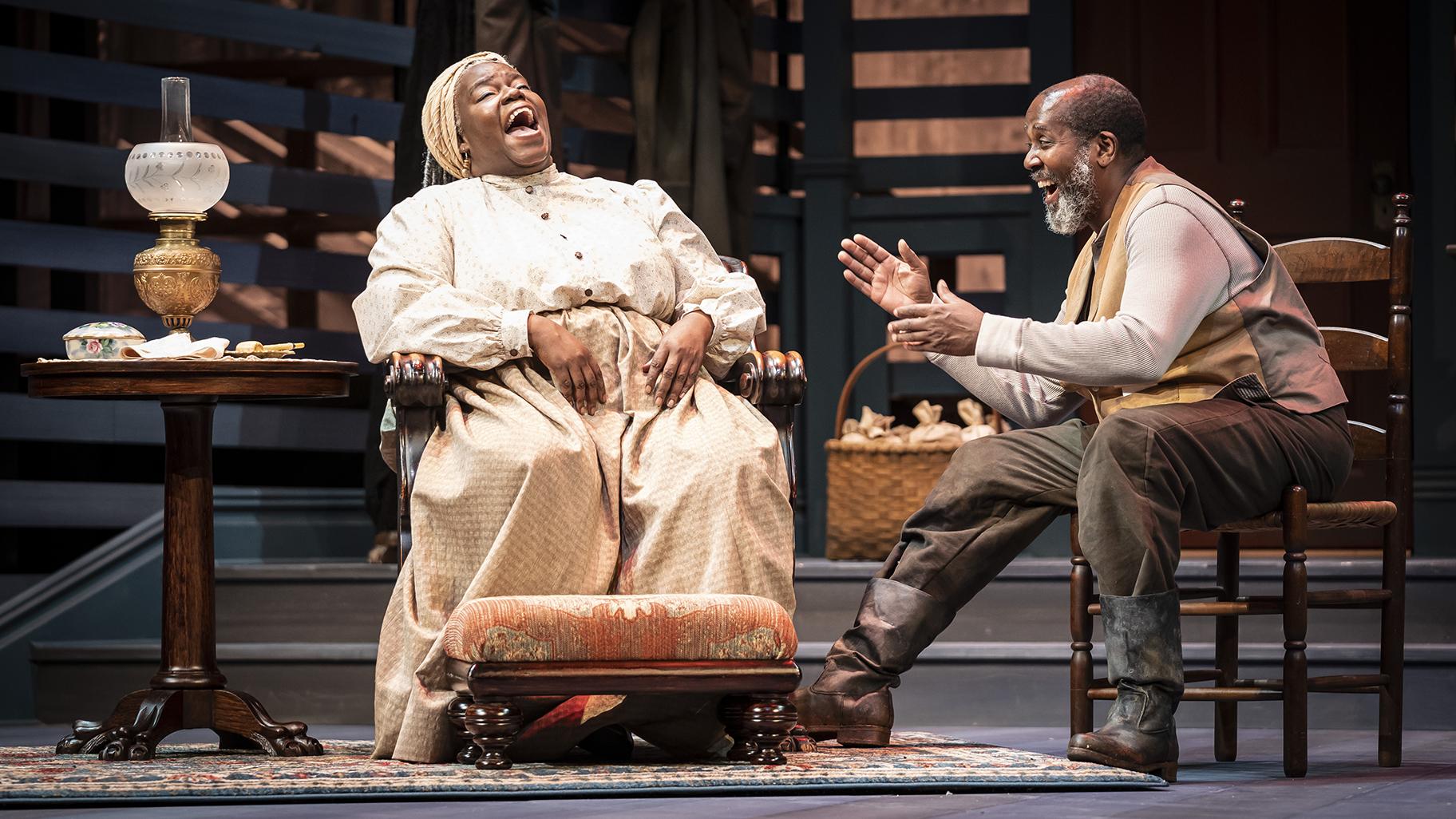 August Wilson, the playwright who so brilliantly chronicled African American life in each decade of the 20th century, waited until very late in his career before writing “Gem of the Ocean.”

In many ways, the play is his series’ “origin story.” And watching the Goodman Theatre’s riveting production of this epic drama (which received its world premiere at the Goodman in 2003, just two years before Wilson’s death), it is easy to understand why he could only deal with the root of all Black history in this country, and its consequences, in reverse order.

Set in Pittsburgh in 1904, “Gem” is driven in large part by Aunt Ester, a woman of extraordinary wisdom and experience who claims to be close to 300 years old. And in a grand aria-like scene, she vividly conjures the brutal voyage to what she calls “The City of Bones” – a hypnotic narrative about the brutal crossing of the Atlantic Ocean on a slave ship named “The Gem of the Ocean” as it traveled from Africa to what would eventually become the United States.

The story Ester tells in that crucial scene is directed at Citizen Barlow, a penniless young man who has fled north from his home in Alabama, and whose theft of a bucket of nails has caused the suicide of a blameless worker at the Pittsburgh mill that employs many Black workers, sparks a devastating strike of protest and a catastrophic fire. Ester’s ceremonial storytelling it is at once an act of moral and historical reckoning, and a ceremony of judgment and potential redemption. It unfolds against Wilson’s sense of how the history of slavery has resulted in a deeply troubled society in which matters of money, power, work, justice, family and male-female relations have become twisted, yet at the same time open to possible healing.

Guiding this complex, three-hour journey through both the mythmaking and the day-to-day turmoil of the story is director Chuck Smith, whose long history with both Wilson and his work is evident in every minute of the Goodman’s powerhouse production that moves seamlessly from the tragic to the comic, the operatic to the conversational. And driving it is every member of Smith’s seven-person cast whose indelible performances play out on designer Linda Buchanan’s two-story home of rough-hewn shingles bathed in Robert Perry’s sea-green lighting. 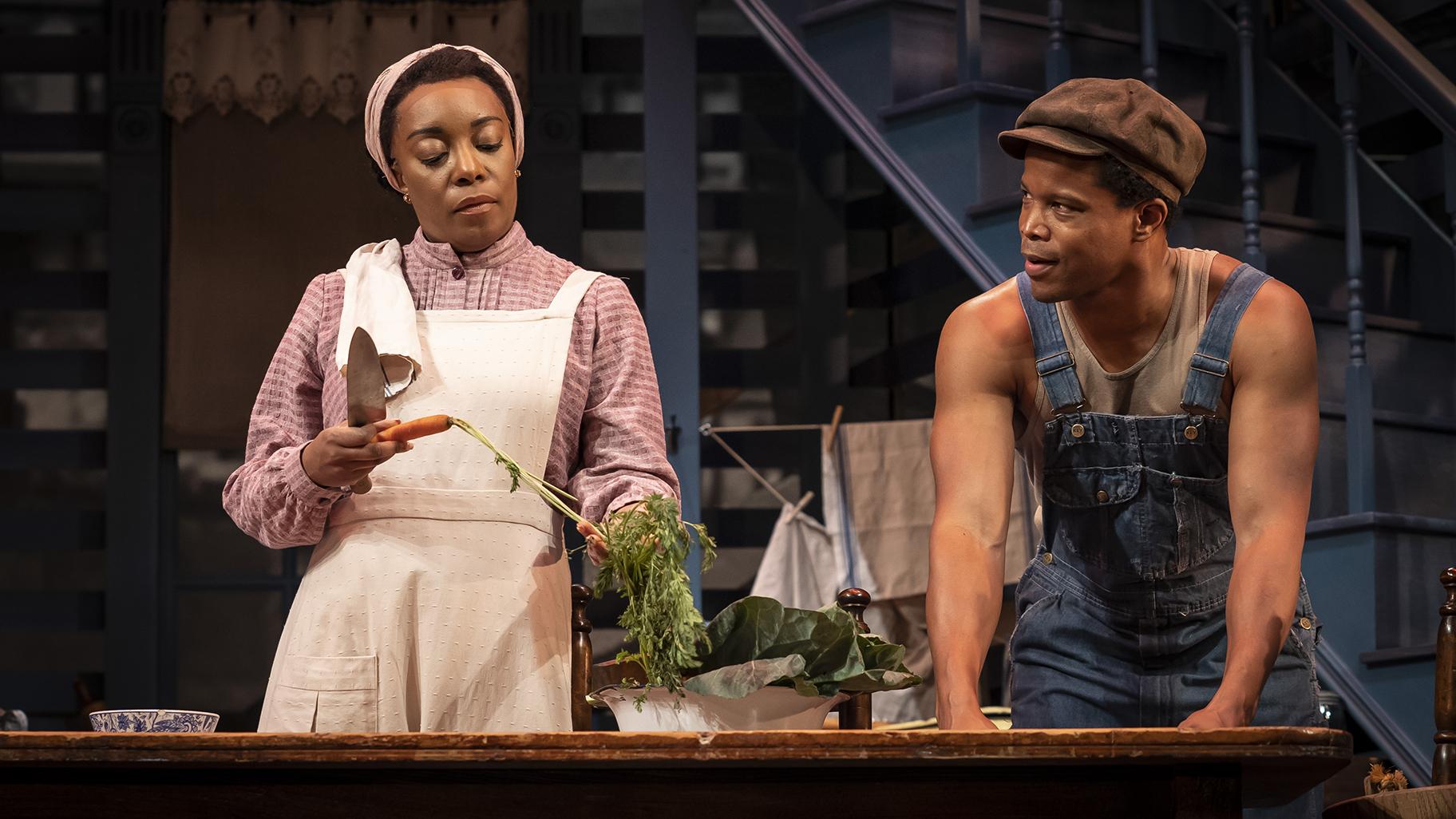 About those actors, and the characters they play in this story that is set against an uneasy time in the early 20th century history of Wilson’s hometown of Pittsburgh:

There is Lisa Gaye Dixon, the grandly maternal, seen-it-all woman who not only does a bravura job with “The City of Bones” scene, but rules the roost in her house with ease and feistiness, humor and wisdom. And there is Sharif Atkins (with his impressive list of credits in every medium), who embodies the determined but very lost and guilt-ridden young Citizen Barlow. He brings a remarkable mix of innocence and experience, anger and passion, confusion, guilt and vulnerability to every scene.

Eli, Aunt Ester’s caretaker, is winningly played by A.C. Smith, a man of emotional balance in contrast to Caesar, the local sheriff, a Black man who thrives on his power to arrest people, and who is played with just the right aura of intensity and smugness by Kelvin Roston, Jr.

Sydney Charles gives a simultaneously bristling and moving performance as Caesar’s beautiful sister, Black Mary, who works as Aunt Ester’s cook and housekeeper, barely tolerates her brother and finds herself falling for Citizen Barlow despite her better judgment. She also does a superb job of declaring her independence and self-confidence from Ester in a moment of semi-comic rage. And later she sings hauntingly in a brief expression of grief.

James A. Williams gives a memorable performance in the role of Solly Two Kings, the aging but ever-defiant rebel and friend of the family who has seen it all during his lifetime (escaping to Canada from slavery, working on the Underground Railroad, helping the Union Army and ultimately engaging in a destructive act that should not be revealed here).

And finally there is the play’s only white character, Rutherford Selig, a peddler of pots and pans, with Gary Houston in a deftly comic turn that captures one of Wilson’s abiding themes – the distracting but ever-present role of money in life.

Of course it is Wilson’s remarkable use of language – alternately poetic, musical, mythic, cynical, romantic, comic, angry, philosophical and spiritual – that drives “Gem,” as well as the nine other plays in his renowned, award-winning Pittsburgh Cycle. And Smith and his cast have served that language and Wilson’s extraordinary insight into human nature to stunning effect.