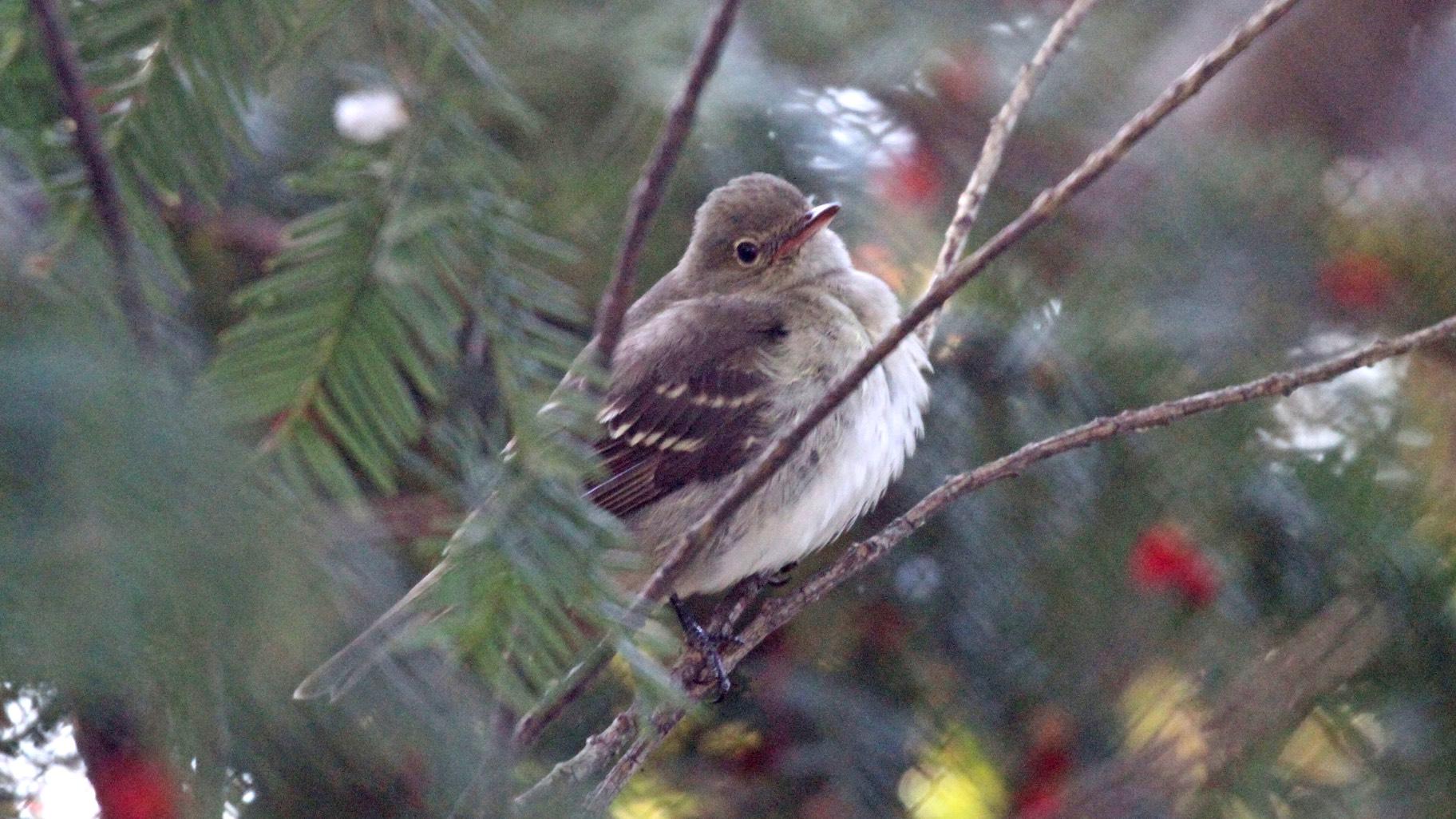 Talk about taking a wrong turn.

A small-billed elaenia, a South American bird that ought to be enjoying the holidays in Bolivia or Buenos Aires, was spotted in Waukegan over Thanksgiving weekend. Bird lovers converged on the site from far and wide in the hopes of catching a glimpse of this rarity.

Doug Stotz was among those who grabbed his binoculars and joined the chase.

“How could you not?” asked Stotz, a senior conservation ecologist at the Field Museum, with 50 years of birding experience.

After standing in the frigid cold for hours, craning to see through the fencing surrounding the area the elaenia had chosen for its home, Stotz was rewarded with what he called “an adequate look.” It was enough of an eyeful, he said, for him to feel comfortable declaring the bird a small-billed and not the similar-looking white-crested elaenia.

If anyone would be capable of making the ID, it would be Stotz, who was treated to a much better view of the first, and at the time only, small-billed elaenia ever recorded in the U.S. That bird turned up in 2012 in, of all places, Chicago’s Douglass Park.

“Something of this sort, I would have said it’s once in a lifetime. Now it’s been two in 10 years,” said Stotz, adding that a third navigationally challenged small-billed stunned Quebec’s birding community this October.

“Should we be alarmed?” he wondered. “Probably not.”

Still, it’s worth questioning why these elaenia have strayed so far from home.

Check out this small-billed elaenia spotted near Chicago. Never heard of it? That's because it's normally found more than 2,400 miles away in South America! It is believed this is the third or fourth sighting in North America. Photo courtesy of Gordon Garcia. pic.twitter.com/nDY0j5SRsz

It’s not unusual for birds to wind up outside their typical range.

In December 2020, birders in the Chicago region flocked to Channahon, southwest of Joliet, based on reports of a sighting of a great kiskadee, a nonmigratory species seldom found north of southern Texas. In May, a broad-billed hummingbird turned up in LaBagh Woods, well north of the tip of its range along the Mexico-Arizona-New Mexico border.

Weather is frequently to blame for the appearance of what’s known as a “vagrant” bird — a rare individual in an oddball space. For example, a hurricane likely blew the great kiskadee into Illinois.

November is notoriously volatile, weather-wise, with storm fronts pushing birds out of their comfort zones. Combine that with fall migration and the month has come to be known among birders as Novem-bird, said Edward Warden, president of the Chicago Ornithological Society.

Where spring migration sees birds racing to their breeding grounds, the fall journey is more leisurely and some might use the opportunity to check out new scenery, he said. “Some species are adventurous, and if you’re going to go on an adventure, (fall) is the time to do it,” said Warden. “From mid-November to early December, that’s when anything goes.”

This time of year, the region’s birders know to be on the lookout for unusual gull species, he said, including the skua, aka, the villain from the film “Happy Feet.” And once or twice a year, a purple sandpiper will reliably detour to Chicago instead of winging toward the Atlantic coast.

Indeed, the birder who first saw the elaenia, Susan Miller-Zelek, was out looking for gulls when she noticed a bird that seemed out of place.

“One bird stood out in my mind, not sure why, but it did,” Miller-Zelek posted to the Chicago Ornithological Society’s Facebook page. “All I could make out was possibly some kind of flycatcher, very late for the season. Something in the back of my head said, ‘Elaenia.’ I thought, ‘Not a chance in hell, end of subject.’”

“When we get these rarities, there’s an expectation of what might show up,” said Stephanie Beilke, conservation science manager at Audubon Great Lakes. The elaenia isn’t one of them. “This is more of a wild card,” she said.

The bird hadn’t just wandered a state or two off course, but an entire hemisphere.

Vagrants are typically migratory birds, as is the case with the elaenia. Though there’s much about migration scientists still don’t understand, the collective wisdom is that birds rely on myriad cues, from weather to more complex signals, to tell them when to start their journey. In terms of navigation, “they might tap into Earth’s magnetic field or patterns of stars,” Beilke said.

In the Southern Hemisphere, where the seasons are opposite ours, a small-billed elaenia would be making its spring/summer journey in November. The one that wound up in Waukegan should have been heading further south, not north, Beilke said.

There’s some evidence to suggest that genetic mutations may play a role in such extreme waywardness, she said. There’s a glitch, so to speak, in the bird’s internal compass, which sends them in the wrong direction.

Studies have been done, for example, on eastern warblers that wind up off the coast of California instead of the southeastern U.S., where the majority overwinter, Stotz said. Captured members of this group, when set loose, routinely fly southwest, instead of southeast, he said, suggesting an altered navigational sense.

The whole subject of vagrants is a fascinating one, Beilke said, and there are researchers solely focused on studying these oddities, looking for any clues or patterns in terms of whether some species are more susceptible, or if vagrants are found in certain places more often than others.

“It’s so hard to study, though, because you have these random incidents,” she said.

Or are they as random as they seem?

If an elaenia perches in an Illinois forest and no one notices, was it there?

The small-billed is described by the Cornell Lab of Ornithology as “very dull” and by Warden as “not a killer in the looks department.” In other words, it would be easy for the average person to pass one unaware, and even an experienced birder might not recognize the drab flycatcher as anything worth a second glance.

“If I was the one seeing that bird, I wouldn’t know, ‘Huh, this looks like it shouldn’t be here,’“ admitted Warden. It took someone like Miller-Zelek, continually frequenting the same area, to fully appreciate the outlier, he said.

How many elaenia may have wandered into the U.S. before 2012 and escaped attention? How many since?

A nondescript bird could easily hide in plain sight, especially if surrounded by showier species. It’s possible, Stotz said, that the whole Novem-bird phenomenon, the seeming proliferation of rarities, has less to do with greater numbers of vagrants finding their way into the Chicago region, and more to do with vagrants sticking out like proverbial sore thumbs once the majority of birds have decamped for the winter.

An ELAENIA sp. (looks like Small-billed) is being seen now at Waukegan harbor, north of Chicago. pic.twitter.com/L6uHL88kUd

What’s certain is that a small-billed elaenia, seldom recorded outside of South America, made its way to Waukegan.

A tropical bird, in Chicago, in late November is not a recipe for success. The elaenia spotted in spring 2012 appeared to shove off after a few days, winding up who knows where, and the Waukegan elaenia, still hanging around as of Tuesday, could still make a U-turn.

“Birds are capable of doing incredible movement. This is a bird that moves thousands of miles,” said Stotz. “It’s not impossible to get home. If it went south, it could probably survive if it got as far as the Gulf Coast.”

When a vagrant like the elaenia attempts to stick things out in Chicago, the consensus among birders and wildlife experts is to not interfere with a rescue or capture.

“There’s no standard operating procedure,” said Warden. “Most of the time we leave it be and err on the side of not intervening.”

Exceptions are if a bird is sick, injured or clearly distressed, he said, as was the case with the recent rescue of a black vulture — not as rare as an elaenia in the Chicago area but still uncommon — found laying on the ground. It was brought in for rehab.

In extreme cases, wrong-way birds can make a life for themselves in their accidental homes. There’s a group of North American barn swallows that started nesting in Argentina rather than migrate north to breed. “Now there’s a small breeding population 180 degrees in the wrong direction,” Stotz said.

Who knows, maybe the elaenia was on a reconnaissance mission.