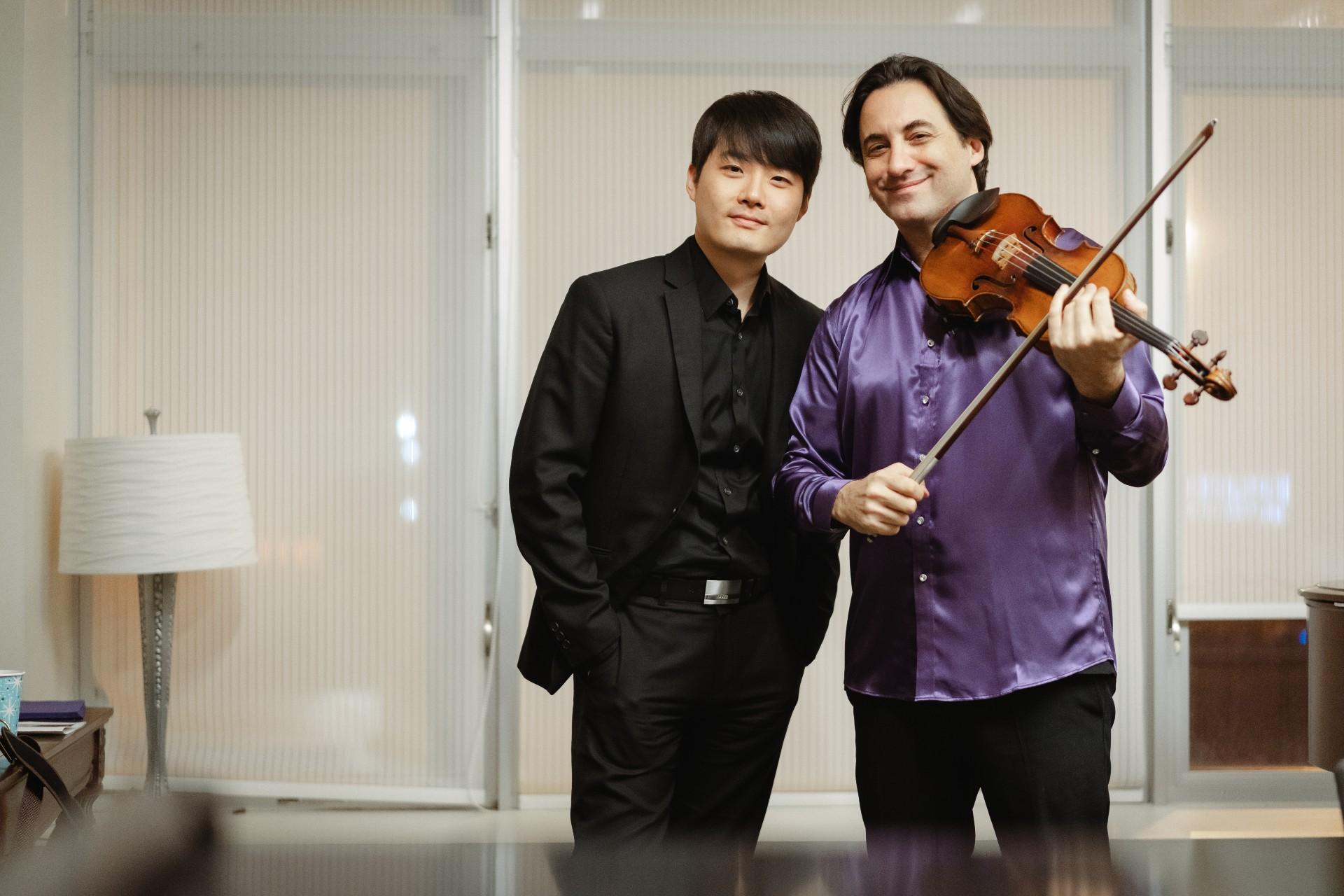 The music of the tango danced its way into Argentina and Uruguay in the mid-19th century by way of European (particularly Italian) immigrants, but its roots were a complex mix of African, Cuban and other influences.

By the early 20th century the tango had become the style most popular among the “underclasses” in Buenos Aires and Montevideo, particularly among the gangsters who visited the brothels in those cities where the male population greatly outnumbered the female population. But in the 1920s, the sexually charged music and the dance of the tango became widely popular among a far broader spectrum of social classes in Europe and beyond. And then, during the 1950s, there was the ascent of Astor Piazzolla (1921-1992), the Argentine-born composer, bandoneon player and arranger who created the music that would come to be known as “the nuevo tango” or “new tango.”

Piazzolla spent part of his youth in New York, and then returned to Argentina as a teenager where he played in traditional tango bands into the late 1940s while also beginning to pursue his interest in classical music. At the suggestion of pianist Arthur Rubinstein, who was living in Buenos Aires at the time, he began to study with Alberto Ginastera, then the foremost Argentine composer of classical music, and he also began listening intently to the music of Bartok and Stravinsky, the major modernists of the time. Then, in 1953, one of his early compositions won a grant from the French government that enabled him to go to Paris and study with Nadia Boulanger, the fabled teacher and composer who mentored everyone from Aaron Copland and Leonard Bernstein to Philip Glass and Quincy Jones. It was Boulanger who encouraged Piazzolla to remain true to his tango roots, and to create his own form of classical music by drawing on those roots rather than by imitating European composers.

I recount all this history simply as a prelude to a discussion of two remarkable concerts that took place recently in Chicago and were designed to celebrate the 100th anniversary of the birth of Piazzolla – the composer who transformed the traditional tango into an irresistible classical music hybrid.

One of those concerts, titled “Between Angels and Demons: A Musical Portrait,” was performed Saturday evening at PianoForte (in collaboration with the North Shore Chamber Music Festival) the wonderfully intimate chamber music theater in the South Loop. And it featured a remarkable program by two bravura musicians: The virtuoso, multi-Grammy-nominated violinist Philippe Quint (who also devised the ideal concept, narration and visuals for the program, and for his earlier multimedia show, “Charlie Chaplin’s Smile”), and pianist Jun Cho (Itzhak Perlman’s studio pianist at the Juilliard School, whose absolutely brilliant and percussive “accompaniment” was in every sense a wholly equal partnership). Quint’s deftly narrated program – which included performances of more than a dozen short but devilishly difficult pieces by Piazzolla, as well as by tango legend Carlos Gardel, Ginastera, Stravinsky, Bartok, Boulanger, Duke Ellington and J.S. Bach – the gradual evolution of the nuevo tango came vividly to life.

While there was no bandoneon to be heard (that fiendishly difficult, tango-defining, accordion-like instrument invented in Germany in 1853 and referred to as “a portable organ”), the heat, drive, danger and potent sensuality of the original tango was ever-present in this violin-piano duo. So were the many and wildly varied sources that Piazzolla so brilliantly borrowed from, and so seamlessly fused into his new tangos – everything from the fugue and counterpoint of Bach, to Bartok’s use of Hungarian folk dance rhythms, to the frenzied Scherzo from Stravinsky’s “Firebird” ballet, to Duke Ellington’s jazzy evocation of a “sentimental mood,” to the klezmer sound in the Jewish wedding song, “Hava Nagila” (evoked by a Piazzolla riff Quint and Cho performed as an encore).

And one final note: A video of this concert is now available online. 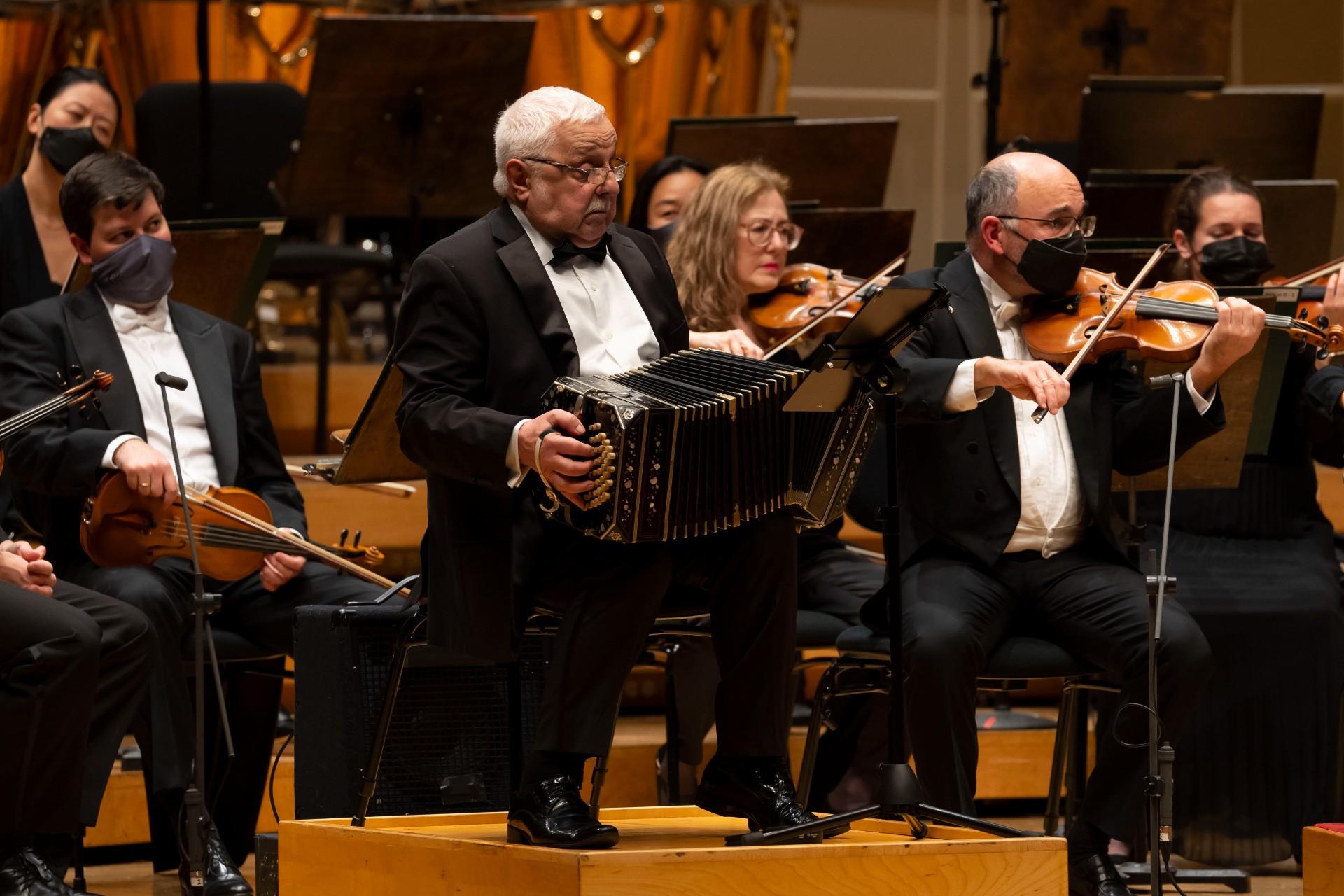 A week before this PianoForte program the Chicago Symphony Orchestra presented its own tribute to Piazzolla in a concert led by the wonderfully expressive guest conductor Giancarlo Guerrero (music director of the Nashville Symphony), and featuring Daniel Binelli, the renowned master of the bandoneon, and a composer considered “the torchbearer” of Piazzolla’s music.

Opening the program was Dietrich Buxtehude’s “Chaconne in E Minor,” originally written for organ, but arranged and orchestrated for strings, winds, horns and timpani in 1937. It was a magnificent start. And closing the concert was Beethoven’s “Symphony No. 1 in C Major,” with its lush forward momentum, its wonderful use of the orchestra’s many voices, and the great emotional clarity of its first movement, followed by the violins’ airy opening sound in the second movement, with the orchestra then joining in with a teasing, playful sort of grace. The familiar Menuetto of the third movement – a kind of rapid-fire courtly dance – was full of energy and exuberance, and the work’s final movement came to a rousing end with the flutes singing, the timpani sounding loudly and a big burst of applause.

But at the center of the concert (and in its first performance by the CSO) was Piazzolla’s “Aconcagua Concerto for Bandoneon and Orchestra,” composed in 1979 and named after the mountain in Argentina that is the highest peak in the Andes. Seated with his heavy, black, accordion-pleated, “71-button keyboard” instrument on his lap (an instrument that can make a haunting sound unlike any other),and backed by a harp, piano, strings, timpani and percussion (with Cynthia Yeh scratching a gourd-like instrument), the erotically charged rhythm of the tango, which can shift from a lyrical wail with a hint of the human voice one moment, to a jazzy riff the next, was irresistible. The work’s second movement opened with a bandoneon solo that almost sounded like lungs expanding and contracting, as a dreamy harp, a cello solo and then the whole ensemble joined for the cinematic-like theme that ended with a solemn fadeout. The presto finale began with big bangs on a drum, followed by a mad dance rhythm, an unusual humming of the strings and finally, a dramatic silence.

Sadly, I was unable to be at the concert by the Latin Grammy-winning Quinteto Astor Piazzolla that also was part of the CSO’s centennial celebration of the composer. I just hope it returns.