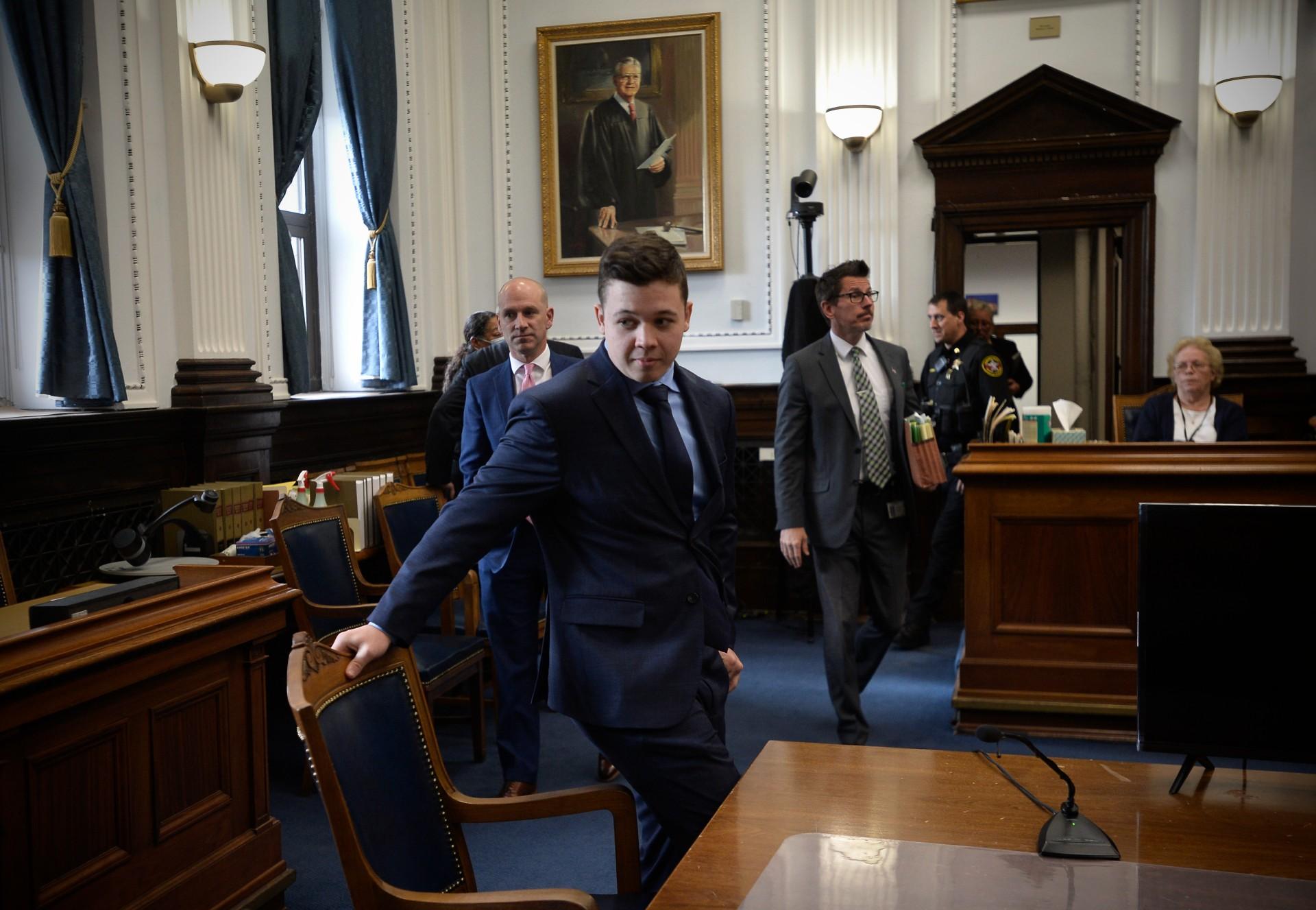 Kyle Rittenhouse, center, pulls out his chair for a meeting Judge Bruce Schroeder called during his trial at the Kenosha County Courthouse in Kenosha, Wis., on Thursday, Nov. 18, 2021. (Sean Krajacic / The Kenosha News via AP, Pool)

KENOSHA, Wis. (AP) — The jury at Kyle Rittenhouse’s murder trial deliberated for a third day without reaching a verdict Thursday, while the judge banned MSNBC from the courthouse after a freelancer for the network was accused of following the jurors in their bus.

Rittenhouse, 18, is on trial for killing two men and wounding a third with a rifle during a turbulent night of protests that erupted in Kenosha in the summer of 2020 after a Black man, Jacob Blake, was shot by a white police officer.

Even as the jury weighed the evidence, two mistrial requests from the defense hung over the case, with the potential to upend the verdict if the panel were to convict Rittenhouse. One of those requests asks the judge to go even further and bar prosecutors from retrying him.

Also Thursday, Circuit Judge Bruce Schroeder banned MSNBC after police said they briefly detained a man who had followed the jury bus and may have tried to photograph jurors. The judge said the man claimed to be working for the network.

NBC News said in a statement that the man was a freelancer who received a citation for a traffic violation that took place near the jury vehicle, and he “never photographed or intended to photograph them.”

Rittenhouse was a 17-year-old former police youth cadet when he went to Kenosha in what he said was an effort to protect property after rioters set fires and ransacked businesses in previous nights.

He shot and killed Joseph Rosenbaum, 36, and Anthony Huber, 26, and wounded Gaige Grosskreutz, now 28. Rittenhouse is white, as were those he shot.

Rittenhouse said he acted in self-defense after coming under attack, while prosecutors argued he instigated the bloodshed.

The case has exposed deep divides among Americans over guns, racial injustice, vigilantism and self-defense in the U.S.

To some civil rights activists, the shootings were an attack on the movement for racial justice, and some have complained of a racial double standard in the way Rittenhouse was treated by law enforcement that night.

The defense has twice asked the judge to declare a mistrial, alleging that they were given an inferior copy of a potentially crucial video and that the prosecution asked improper questions of Rittenhouse during cross-examination.

Schroeder has said the bid for a mistrial will have to be addressed if there is a guilty verdict. If Rittenhouse is acquitted, the dispute won’t matter. But if he is found guilty and the judge then declares a mistrial, that would essentially void the verdict.

Rittenhouse could get life in prison if convicted of the most serious charge against him.