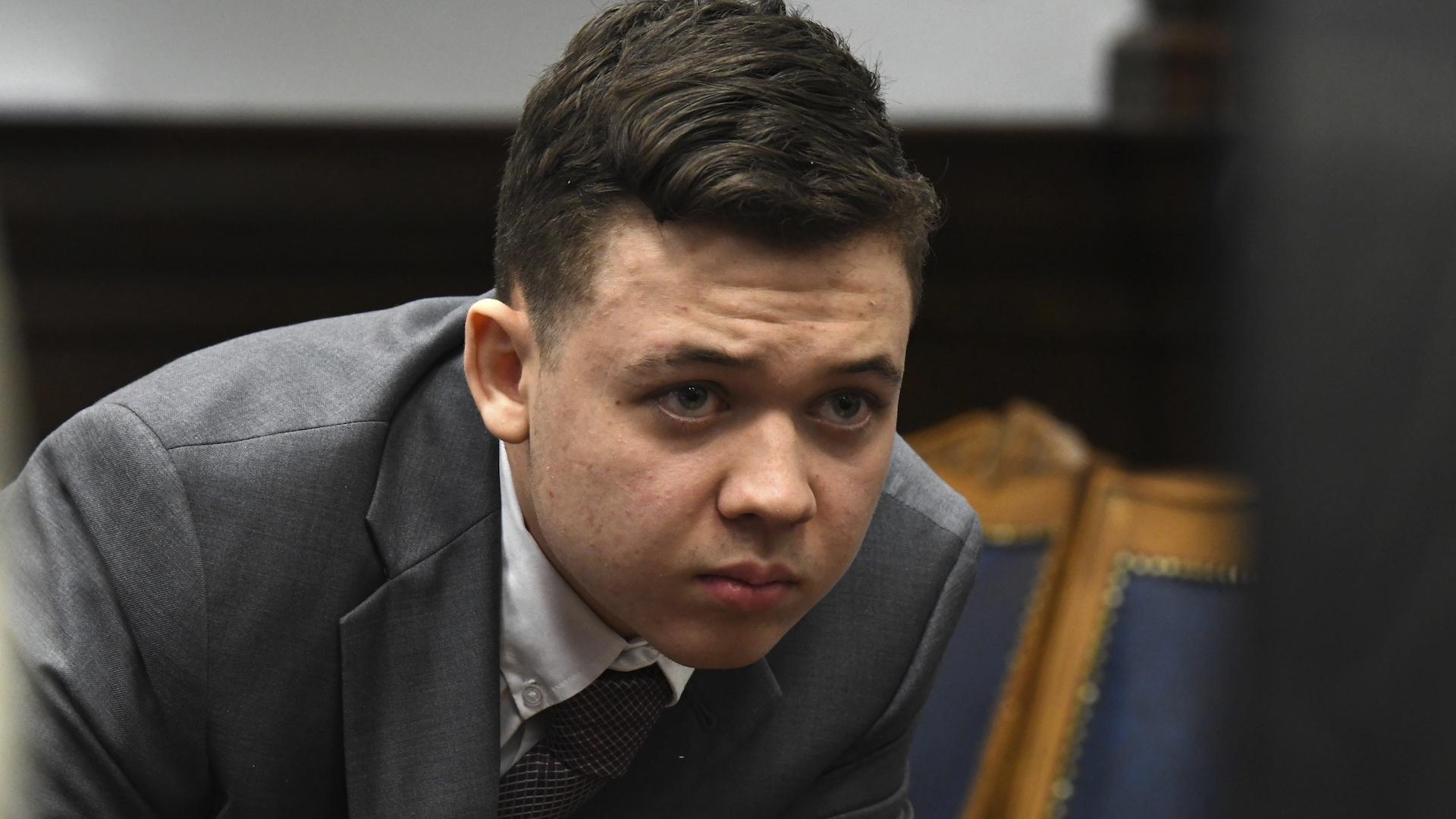 Kyle Rittenhouse peers at the screen as attorneys for both sides argue about a video during Rittenhouse's trial at the Kenosha County Courthouse in Kenosha, Wis., on Friday, Nov. 12, 2021. (Mark Hertzberg /Pool Photo via AP)

KENOSHA, Wis. (AP) — Kyle Rittenhouse provoked bloodshed on the streets of Kenosha by bringing a semi-automatic rifle to a protest and menacing others, and when the shooting stopped, he walked off like a “hero in a Western,” a prosecutor said in closing arguments Monday at Rittenhouse’s murder trial.

But Rittenhouse’s lawyer countered that the shooting started after the young man was ambushed by a “crazy person” that night and feared his gun was going to be wrested away and used to kill him. Defense attorney Mark Richards said Rittenhouse acted in self-defense.

Eighteen jurors have been hearing the case; the 12 who will decide Rittenhouse’s fate and the six who will be designated alternates will be determined by drawing numbers from a lottery drum.

Rittenhouse, then 17, shot two men to death and wounded a third during a tumultuous night of protests against racial injustice in the summer of 2020.

Rittenhouse said he went to Kenosha from his home in Antioch, Illinois, to protect property from rioters in the days after a Black man, Jacob Blake, was shot by a white Kenosha police officer. Rittenhouse, a former police youth cadet, is white, as were those he shot.

In closing arguments, prosecutor Thomas Binger said Rittenhouse was a “wannabe soldier” and was “looking for trouble that night.” Binger repeatedly showed the jury drone video that he said depicted Rittenhouse pointing the AR-style weapon at demonstrators.

“This is the provocation. This is what starts this incident,” the prosecutor declared.

Rittenhouse, now 18, faces a mandatory sentence of life in prison if convicted of the most serious charge against him, first-degree intentional homicide, which is Wisconsin’s top murder count.

Binger zeroed in on the killing of 36-year-old Joseph Rosenbaum, who was the first man gunned down that night and whose shooting set in motion the ones that followed. The prosecutor repeatedly called it murder, saying it was unjustified.

The prosecutor reminded jurors that Rittenhouse testified he knew Rosenbaum was unarmed. Binger also said there is no video to support the defense claim that Rosenbaum threatened to kill Rittenhouse.

Binger disputed the contention that Rosenbaum was trying to grab Rittenhouse’s rifle. “Mr. Rosenbaum is not even within arm’s reach when the first shot occurs,” Binger said. He rejected the claim that Rittenhouse had no choice but to shoot, saying he could have run away.

And Binger argued that once Rosenbaum was wounded, he was not even capable of taking away the gun, which was strapped to Rittenhouse’s body, since he was falling to the ground with a fractured pelvis. Rittenhouse kept firing, delivering what the prosecutor called the “kill shot” to Rosenbaum’s back.

“I think we can also agree that we shouldn’t have 17-year-olds running around our streets with AR-15s, because this is exactly what happens,” Binger said.

In his own closing argument, Richards, the defense attorney, called Rosenbaum a “crazy person” who was “hell-bent on causing trouble that night” and went after Rittenhouse unprovoked.

“Mr. Rosenbaum was shot because he was chasing my client and going to kill him, take his gun and carry out the threats he made,” Richards said, adding that Rittenhouse never pointed his gun before being chased: “It didn’t happen.”

Richards said an enlarged image that prosecutors said shows Rittenhouse pointing his gun at protesters is “hocus pocus” that doesn’t prove anything.

Rittenhouse himself looked largely impassive during the arguments, occasionally jotting notes. His mother, Wendy Rittenhouse, listened intently behind him.

With a verdict near, Gov. Tony Evers said that 500 National Guard members would be prepared for duty in Kenosha if requested by local law enforcement.

After killing Rosenbaum, Rittenhouse shot and killed Anthony Huber, 26, and wounded Gaige Grosskreutz, 28, while trying to make his way through the crowd. Rittenhouse testified that Huber hit him with a skateboard and that Grosskreutz came at him with a gun of his own — an account largely corroborated by video and Grosskreutz himself.

But the prosecutor said Rittenhouse provoked that bloodshed, too. He said Huber, Grosskreutz and others in the crowd were trying to stop what they believed was an active shooter.

When it was all over, Rittenhouse walked away like a “hero in a Western — without a care in the world for anything he’s just done,” Binger said.

The defense, though, said Rittenhouse was set upon by a “mob.” Richards accused prosecutors of using the term “active shooter” for Rittenhouse because of “the loaded connotations of that word.”

And in an apparent reference to the police shooting of a Black man that touched off the protests, Richards said: “Other people in this community have shot people seven times, and it’s been found to be OK.” (No charges were brought against the white officer.)

When the prosecutor displayed a photo of Rosenbaum’s bloodied body on a gurney during his autopsy and another of his mangled hand, some jurors appeared to avert their eyes. Later, when Binger displayed a close-up of Grosskreutz’s bicep largely obliterated by a bullet, several jurors winced and turned away.

The sound of a small group of protesters chanting outside the building could be heard at one point, but it wasn’t clear from inside the courtroom what they were saying or whether the jury heard them.

Supporters have hailed Rittenhouse as a hero who took a stand against lawlessness; foes have branded him a vigilante.

Binger began his closing arguments by questioning whether Rittenhouse was genuinely trying to help.

The prosecutor noted that Rittenhouse had ammunition capable of traveling the length of five football fields and passing through cars, and asked the jury: “Why do you need 30 rounds of full metal jacket (ammo) to protect a building?”

But Richards said Rittenhouse, who worked as a lifeguard in Kenosha and helped clean up graffiti before the shootings, “feels for this community” and “came down here trying to help, to see the damage.”

The defense attorney branded the trial a “political case” brought by prosecutors who he said need someone to blame for the violence.

Earlier Monday, Judge Bruce Schroeder dismissed a count of possession of a dangerous weapon by a person under 18, a misdemeanor that had appeared to be among the likeliest of the charges to net a conviction. It carries by up to nine months in jail.

The defense argued that Wisconsin law has an exception related to the length of a weapon’s barrel. After prosecutors conceded Rittenhouse’s rifle was not short-barreled, the judge threw out the charge.

Perhaps in recognition of weaknesses in their case, prosecutors asked the judge to let the jury consider several lesser charges if they acquit him on the original counts. Schroeder agreed to do so as he delivered some 36 pages of legal instructions to the jury.

In his instructions, the judge said that to accept Rittenhouse’s claim of self-defense, the jury must find that he believed there was an unlawful threat to him and that the amount of force he used was reasonable and necessary.