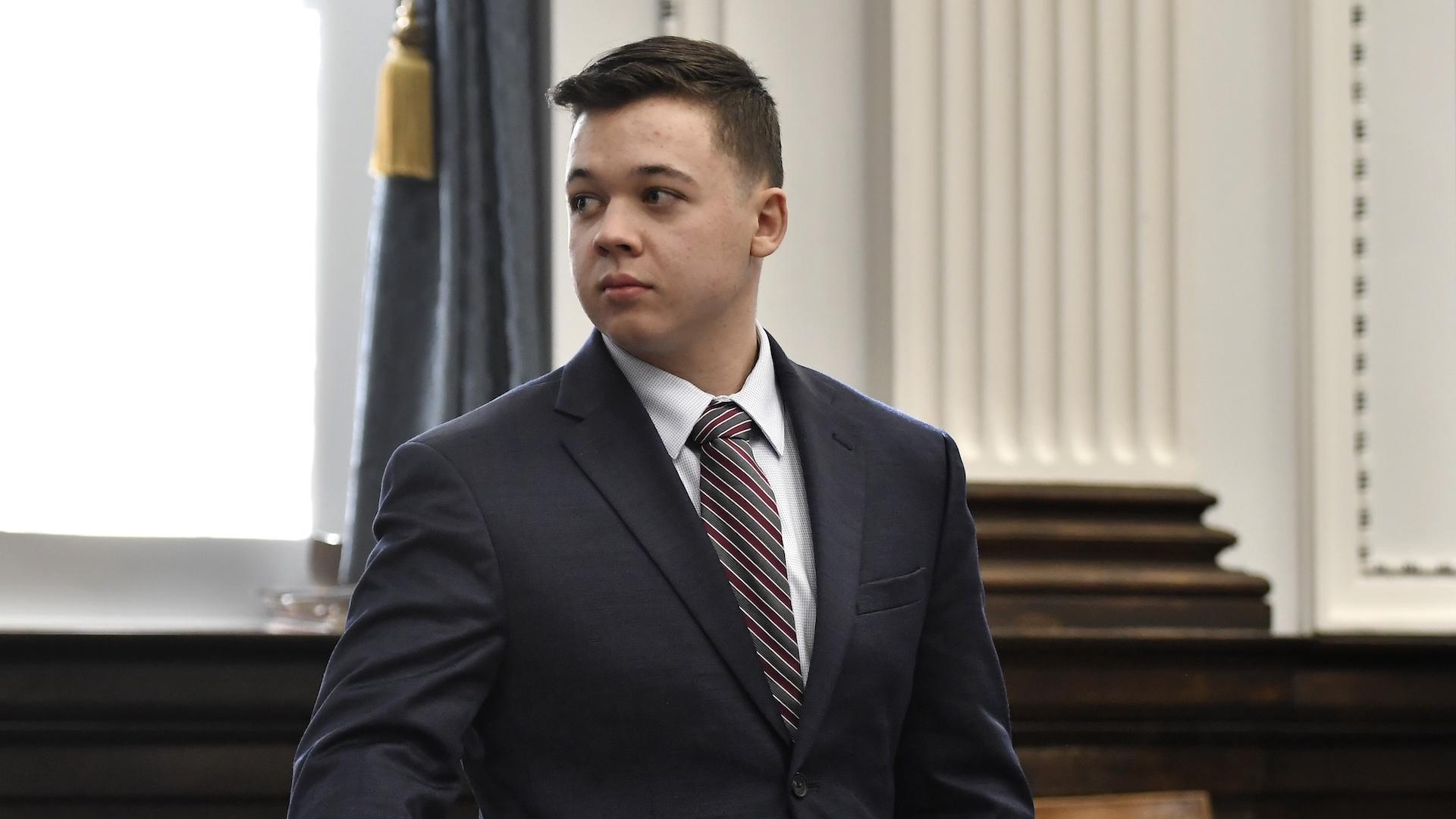 Kyle Rittenhouse looks back to the gallery during a break in testimony from Gage Groskreutz during his trial at the Kenosha County Courthouse in Kenosha, Wis., on Monday, Nov. 8, 2021. (Sean Krajacic/The Kenosha News via AP, Pool)

KENOSHA, Wis. (AP) — The first man killed by Kyle Rittenhouse on the streets of Kenosha was shot at a range of just a few feet and had soot injuries that could indicate he had his hand over the barrel of Rittenhouse’s rifle, a pathologist testified Tuesday.

But it was unclear from video footage whether Joseph Rosenbaum was grabbing for Rittenhouse’s gun or trying to swat it away, said the witness, Dr. Doug Kelley, with the Milwaukee County medical examiner’s office.

Kelley was one of the final witnesses for the state before prosecutors rested their murder case after 5 1/2 days of testimony that were aimed at portraying Rittenhouse as the aggressor but often bolstered the young man’s claim of self-defense. His lawyers have suggested the 17-year-old was afraid his gun would be taken away and used against him.

The defense then began presenting its side, calling as its first witnesses people who were on the streets with Rittenhouse that night and described him as pale, shaking, sweating and stammering after the shootings.

“He repeats, ‘I just shot someone’ over and over, and I believe at some point he said he had to shoot someone,” testified Nicholas Smith, who said he had gone to the protests that shook Kenosha that night at the request of the owners of a car dealership to protect the business.

“My god, my life might be over,” another witness, JoAnn Fiedler, quoted Rittenhouse as saying. She said he didn’t give any details about what happened but told her he “had to do it.”

Rittenhouse, now 18, killed two men and wounded a third during a night of turbulent demonstrations against racial injustice in Kenosha in the summer of 2020.

The former police youth cadet from Antioch, Illinois, had gone to Kenosha with an AR-style semi-automatic rifle and a medical kit in what he said was an effort to protect property from the damaging protests that broke out over the shooting of Jacob Blake, a Black man, by a white Kenosha police officer.

Rittenhouse could get life in prison if convicted of the most serious charge against him.

While Rittenhouse is white, as were those he shot, the case has stirred racially charged debate over vigilantism, the right to bear arms, and the unrest that erupted around the U.S. that summer over the killing of George Floyd and other police violence against Black people.

On Tuesday, the jury watched drone video that was zoomed-in and slowed down to show Rosenbaum following Rittenhouse, and then Rittenhouse wheeling around and shooting Rosenbaum at close range.

Kelley, the pathologist, said Rosenbaum was shot four times by someone who was within 4 feet of him. He testified that Rosenbaum was first wounded in the groin and then in the hand and thigh as he faced Rittenhouse, and then was shot in the head and in the back.

Those final two shots were at a downward angle, the pathologist said. Prosecutors have said this indicates Rosenbaum was falling forward, while defense attorney Mark Richards said Rosenbaum was lunging.

Kelley said both scenarios were possible.

Kelley also said Rosenbaum’s hand was “in close proximity or in contact with the end of that rifle.”

Richards pointed out small injuries from soot on Rosenbaum’s hand and said: “So that hand was over the barrel of Mr. Rittenhouse’s gun when his hand was shot.”

Fiedler, the defense witness, was with Rittenhouse outside the car dealership just before the first shooting, and said they were being shouted at and taunted by protesters, including Rosenbaum. But Fiedler, who said she carried a pistol, testified she never saw Rittenhouse threaten or point his gun at anyone.

“The whole night was quite shocking, but we didn’t really do anything,” Fiedler said of the yelling directed at those guarding the store. “We just kind of stood there. You have to ignore that.”

Fiedler said she later opened the door of the dealership for Rittenhouse after the shootings, and he appeared to be “totally in shock” and fell into her, telling her he had shot someone.

“He was pale, shaking, kind of stammering, slurring his words. He was sweating,” she said.

Last week, witnesses testified that Rosenbaum, 36, was “hyperaggressive” and “acting belligerently” that night and threatened to kill Rittenhouse at one point. One witness said Rosenbaum was gunned down after chasing Rittenhouse and lunging for his rifle.

Wisconsin’s self-defense law allows someone to use deadly force only if “necessary to prevent imminent death or great bodily harm.” The jury must decide whether Rittenhouse believed he was in such peril and whether that belief was reasonable under the circumstances.

On Tuesday, Rittenhouse turned his head and averted his eyes from a defense-table monitor as prosecutors displayed medical examiner photographs of Huber’s body laid out on a gurney, a gunshot wound to his chest clearly visible. Rittenhouse breathed deeply as autopsy photos of Rosenbaum showing his injuries were displayed for the jury.

A few jurors also seemed to find it difficult to look for long at the images, one glancing up at a monitor over her shoulder, then looking straight ahead.