Witness: Kenosha Victim Was Belligerent But No Threat 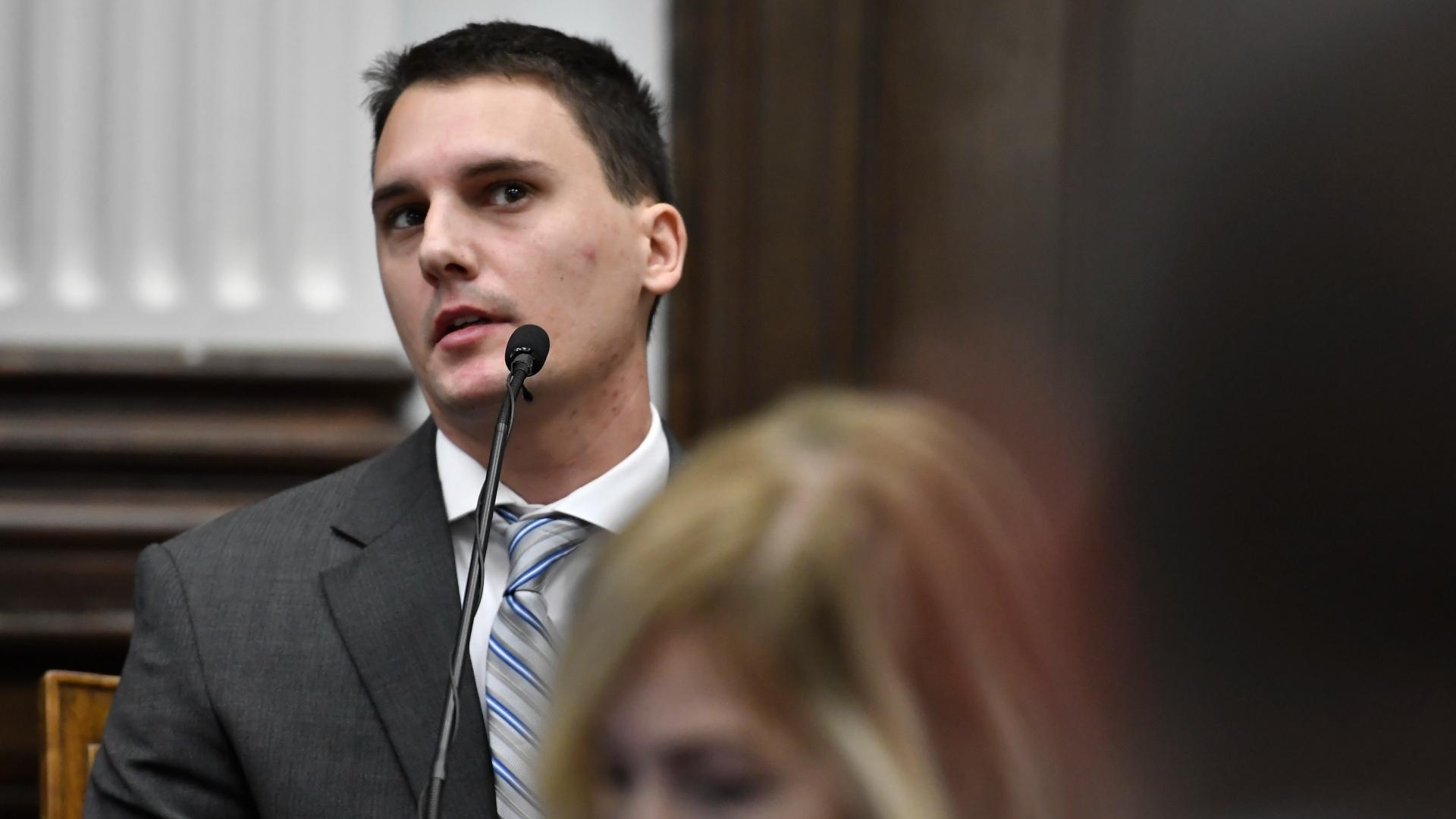 Jason Lackowski takes the witness stand and testifies during Kyle Rittenhouse's trial at the Kenosha County Courthouse in Kenosha, Wis., on Friday, Nov. 5, 2021. Lackowski was part of the group Rittenhouse was with on the night of Aug. 25, 2020. (Sean Krajacic / The Kenosha News via AP, Pool)

KENOSHA, Wis. (AP) — The first man shot and killed by Kyle Rittenhouse on the streets of Kenosha was acting “belligerently” that night but did not appear to pose a serious threat to anyone, a witness testified Friday at Rittenhouse’s murder trial.

Jason Lackowski, a former Marine who said he took an AR-15 semi-automatic rifle to Kenosha last year to help protect property during violent protests against racial injustice, said that Joseph Rosenbaum “asked very bluntly to shoot him” and took a few “false steppings ... to entice someone to do something.”

Lackowski got up from the witness stand and demonstrated what he called “false stepping.” He took a small step and slight lurch forward, then stopped.

But Lackowski, who was called as a witness by the prosecution, said he considered Rosenbaum a “babbling idiot” and turned his back and ignored him. He admitted he didn’t see everything that went on between Rittenhouse and Rosenbaum, including their final clash.

In other testimony, the prosecution suffered a potential blow when Rosenbaum’s fiancee, Kariann Swart, disclosed that he was on medication for bipolar disorder and depression but didn’t fill his prescriptions because the local pharmacy was boarded up as a result of the unrest — information Rittenhouse’s lawyers could use in their bid to portray Rosenbaum as the aggressor that night.

The judge allowed the defense to elicit testimony about Rosenbaum’s mental illness because prosecutors brought up mention of medication. Had prosecutors not touched on the topic, it is unlikely the judge would have let the defense bring it up.

On the day he was shot, Rosenbaum had been released from a Milwaukee hospital. The jury was told that much, but not why he had been admitted — after a suicide attempt.

Rittenhouse, 18, is charged with shooting three men, two fatally, in the summer of 2020. The one-time police youth cadet was 17 when he went to Kenosha with an AR-style rifle and a medical kit in what he said was an effort to safeguard property from the demonstrations that broke out over the shooting of Jacob Blake, a Black man, by a white Kenosha police officer.

Rittenhouse is white, as were those he shot. Prosecutors have portrayed Rittenhouse as the instigator of the bloodshed, while his lawyer has argued that he acted in self-defense, suggesting among other things that Rittenhouse feared his weapon would be taken away and used against him.

On Thursday, witnesses testified that a belligerent Rosenbaum angrily threatened to kill Rittenhouse that night and that Rosenbaum was later gunned down after he chased Rittenhouse and lunged for the young man’s rifle.

A state crime lab DNA analyst testified Friday that she tested swabs from the barrel guard from Rittenhouse’s rifle and did not find DNA from Rosenbaum or the other man killed that night, Anthony Huber. But Amber Rasmussen said she received no swabs from the actual barrel of the gun and would have no way of knowing if Rosenbaum touched it.

Under cross-examination by Rittenhouse attorney Corey Chirafasi, Rasmussen was shown still images of Huber and Rittenhouse and agreed they appeared to depict Huber touching the rifle. She also acknowledged that the absence of Huber’s DNA on the gun doesn’t mean he didn’t touch it.

In testifying about patrolling the streets of Kenosha against protest violence, Lackowski and another veteran, former Army infantryman Ryan Balch, both used military terminology that reflected their backgrounds.

Lackowski referred to “areas of occupation,” talked about taking up his “post” in a parking lot, and said he was trained in “shout, shove, show, shoot.”

“You shout, you shove, you show your firearm and you shoot,” Lackowski explained.

Balch used the term “plate carrier,” which he explained means body armor. He gave a detailed explanation of the differences between full metal jacket bullets and hollow points and talked about ensuring the armed citizens in Kenosha that night worked in pairs to protect each other.

According to testimony, Rosenbaum, 36, was unarmed and did not hurt anyone that night. During the clash with Rittenhouse, Rosenbaum threw a clear plastic hospital bag that he had been given to hold his toiletries.

Rosenbaum’s fiancee testified that hours before he was killed, she told him not to go to downtown Kenosha because of the unrest.

“When he left, he said that he would see me in the morning and he was all excited and ‘I love you.’ It was a pleasant visit,” Swart said.

After getting a call from the medical examiner that Rosenbaum had died, Swart said, she fell to her knees and cried and then found a video online showing him dying: “I broke down and I can’t get that image out of my head.”

In the morning, Swart said, she went to the spot at a car dealership where Rosenbaum lay on the ground after being shot. “And I put my hand in it and my hand was wet with his blood,” she said. “And that’s again when I collapsed on the ground.”

Rosenbaum’s killing has emerged as one of the most crucial moments that night because it set in motion the bloodshed that followed moments later.

Rittenhouse shot and killed Huber, a 26-year-old protester seen on bystander video hitting Rittenhouse with a skateboard. Rittenhouse then wounded Gaige Grosskreutz, 27, who had a gun in his hand as he stepped toward Rittenhouse.

Rittenhouse could get life in prison if convicted in the case that has stirred furious debate over self-defense, vigilantism, the right to bear arms and the racial unrest that erupted around the U.S. after the killing of George Floyd in Minneapolis and other cases like it.