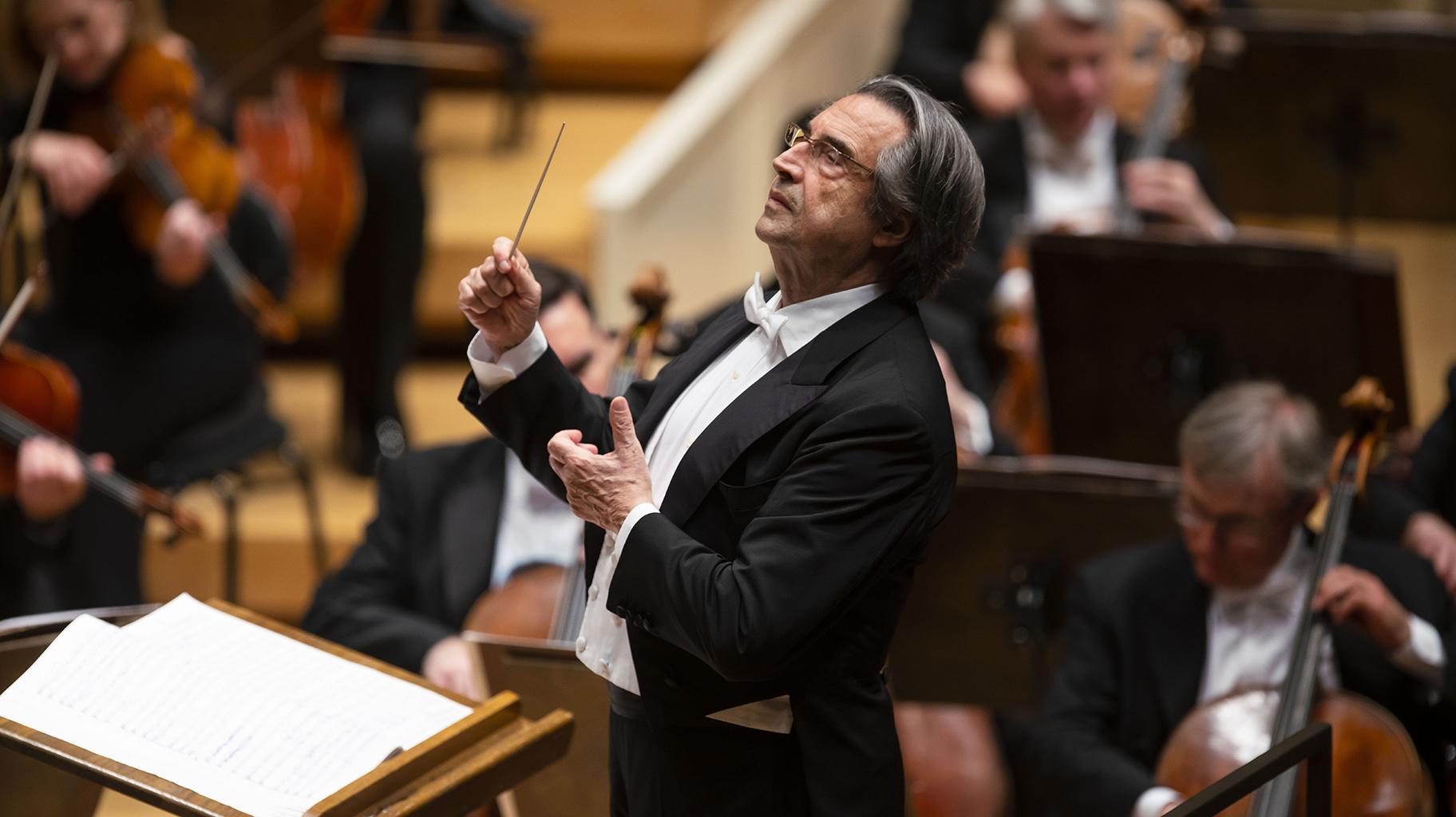 Zell Music Director Riccardo Muti on the podium during the CSO’s May 9, 2019 program of works by Mozart and Stravinsky. (Photo credit: Todd Rosenberg)

Once it came to terms with the initial shock of the pandemic lockdown in March 2020, along with the cancellation of a widely anticipated season to be led by Maestro Riccardo Muti, the Chicago Symphony Orchestra began devising a great deal of high-level, ingeniously imagined virtual programming. It even developed clever ways to get reduced ensembles of its superb musicians back onstage at Orchestra Hall (albeit without a live audience). And then, for the past several weeks, it even opened its doors to a masked and radically distanced live audience for a series of three very different but uniformly exceptional concerts featuring less scaled-down ensembles that were vivid reminders of all we have been missing — including the sound of applause.

But now comes spirit-raising news that should get the hearts of CSO fans beating in fast and furious synchrony once again. True, the orchestra will perform at the Ravinia Festival this summer. But beginning in September, Muti will return to Chicago from his home in Italy for his 12th year as music director. And he will lead the orchestra he has not seen since February 2020 in a three-week residency marking the official opening of the 2021-22 season in Orchestra Hall and the return of (hopefully full) live audiences.

The series will include several adventurous programs designed to create an intriguing counterpoint of classics (both familiar and rarely heard) along with the work of contemporary composers. And in many ways this replicates the sophisticated mix-and-match pattern of the CSO’s pandemic-era programming.

First up (Sept. 23-25), will be Beethoven’s familiar and immensely influential “Symphony No. 3 (Eroica),” often described as the work that marked the shift from the classical to the romantic period. Prefacing this work will be two far less familiar pieces: The Overture to “L’Amant anonyme” (“The Anonymous Lover”), a late 18th century comic opera by Joseph Bologne, Chevalier de Saint-George, a composer of mixed race (the son of a wealthy French planter and a Senegalese mother who was a slave), who was born in Guadalupe and raised in Paris. Also on the program will be the Andante moderato for string orchestra by Florence Price, the Black American composer whose “Symphony No. 1” famously received its world premiere by the CSO in 1933.

The next program (Sept. 30-Oct. 2), will mark the return of violinist Leonidas Kavakos, whose 2019 performance with the CSO of Beethoven’s “Violin Concerto” left audiences spellbound. This time around Kavakos will join the orchestra for a performance of Brahms’ “Violin Concerto in D Major.” And then Muti and the orchestra will move on to Beethoven’s buoyantly beautiful “Symphony No. 7.”

The third program in Muti’s residency (Oct. 7-9), will open with the CSO’s first performance of Missy Mazzoli’s 2006 percussion-infused work, “These Worlds in Us,” which was inspired by James Tate’s poem, “The Lost Pilot,” about his father’s death in WWII, and is dedicated to Mazzoli’s own father who was a soldier in the Vietnam War. (Mazzoli’s tenure as a Mead composer-in residence was upended by the pandemic as has been extended into this coming season by the CSO.) This contemporary piece will be followed by the work of two 19th century Russian composers — the relatively unknown Anatoly Liadov, whose orchestral tone poem, “The Enchanted Lake,” evokes a peaceful moonlit night, and Tchaikovsky, whose wildly animated and mood-shifting “Symphony No. 6 (Pathetique)” is a classical music standard.

Among the highlights already planned for the CSO’s 2021-22 season are:

—The world premiere of the CSO-commissioned work “Orpheus Undone” by Missy Mazzoli (spring 2022).

—The world premiere of a CSO-commissioned work by Jessie Montgomery, the incoming Mead Composer-in-Residence (Spring 2022).

—Performances of Beethoven’s Symphonies No. 4, No. 6 and No. 9 (winter/spring 2022), clearly a “belated” celebration of the composer’s 250th birthday that was not completed due to the lockdown.

—Season finale programs will include a concert version of Verdi’s opera, “Un ballo in maschera (A Masked Ball),” and a free Concert for Chicago in Millennium Park (June 2022).

In a prepared statement from his home in Italy, Muti heralded the return of a “live” CSO season and noted: “As it has for many years, the spiritual food of culture will bring us together, but this time with a special poignancy after being so long apart.”

For tickets, visit cso.org. (Note: Additional details of the fall 2021 season will be announced on July 13, with more plans for the winter/spring 2022 season expected to be released in October.)